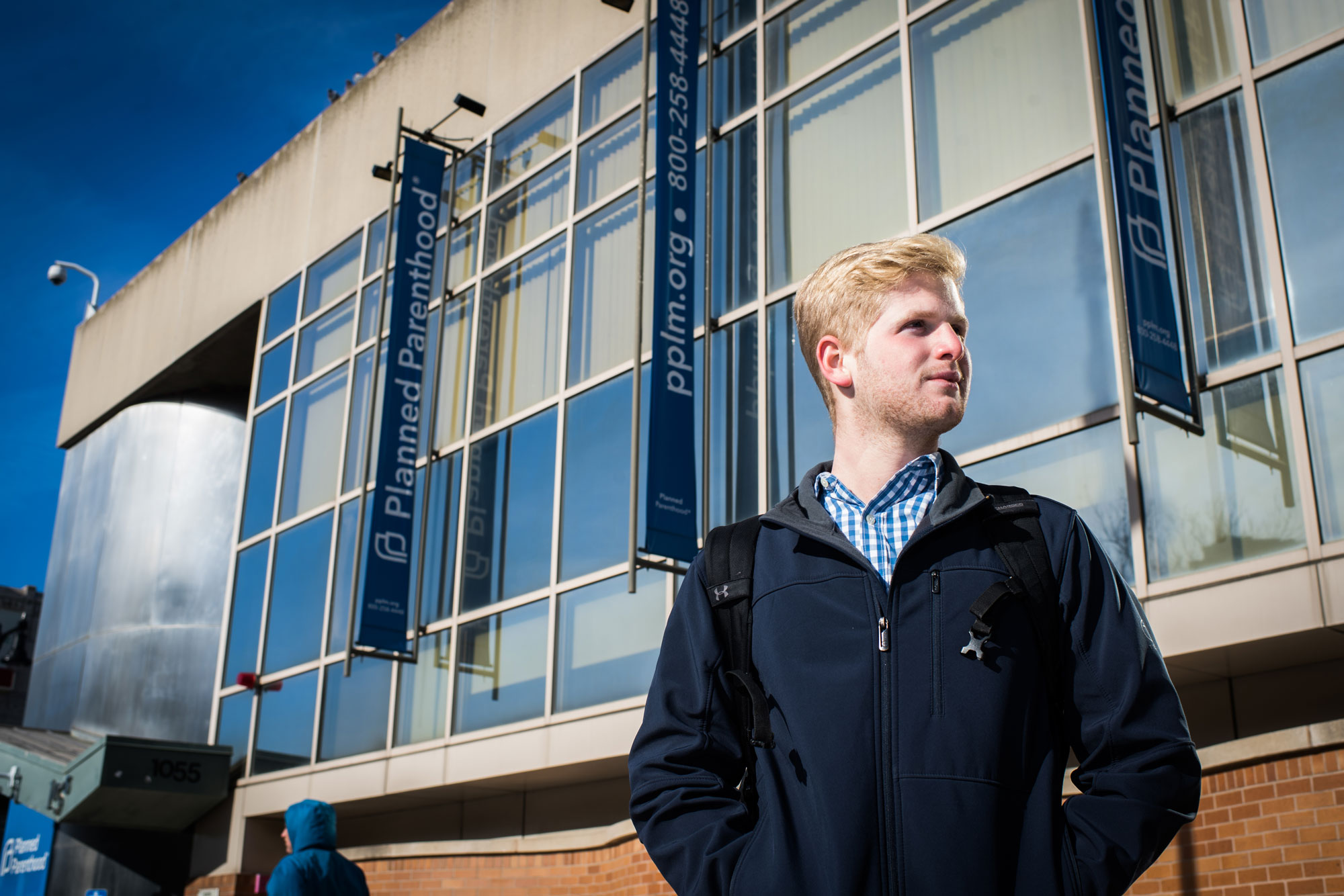 Researcher observes how a conservative cause operates near a liberal campus

Throughout his undergraduate years, Lev Paasche-Orlow could set his phone’s time to the anti-abortion activists he strolled past outside of Planned Parenthood on Comm Ave on the western fringe of campus: four days a week, from 6:45 in the morning until 1 p.m.

The group, which swelled some Saturdays this past summer to between 20 and 40 people, “even when it was like 97 degrees,” passed out flyers, prayed, and proffered alternatives to ending pregnancies to patients, Paasche-Orlow (CAS’20) says. He wasn’t intrigued so much ideologically—he is pro-abortion rights—as he was academically. The sociology major wondered how well-organized the activists were and what kept them defying elements like heat and rain and the likely resentment of nearby campus liberals to keep at it.

His questions turned into a study supported by BU’s  Undergraduate Research Opportunities Program, which provides funding for faculty-mentored research by undergrad students. Mentored by Neha Gondal, a College of Arts & Sciences assistant professor of sociology, Paasche-Orlow interviewed 21 protesters and observed numerous gatherings outside Planned Parenthood and at a private clinic in Brookline.

While he’s still analyzing the data, a preliminary takeaway is that these protesters—a term they reject, he says, preferring “counselors” for the abortion-alternatives advice they dispense—police themselves with martial efficiency, weeding out belligerent types, and in “one of the most funny dynamics,” maintaining good relations with Planned Parenthood’s security guards to help in keeping the peace.

Occasionally, when pro–Planned Parenthood passers-by tried to bait protesters into a confrontation, he observed the guards asking their own supporters to leave. “A lot of the protesters who are regulars are on a first-name basis with the security guards,” Paasche-Orlow says, “and think actually pretty highly of the security guards.”

The site is less than a mile from two Brookline clinics, one of them another Planned Parenthood, where a gunman killed two people and wounded five in 1994.

Gondal says Paasche-Orlow’s project adds valuable insights to protest research. “Plenty of people have studied all sorts of social movements, including the pro-life movement,” she says, “but one of the things that speaks to Lev is the specific context in which this is occurring on a university campus.…Universities do value both free speech, but also, typically, universities do see themselves, and students often see themselves, as liberal.

Her student’s work also punctures misconceptions about such protests, she says. “We go in thinking that they are black-and-white situations, but that’s rarely the case.…Relationships develop that tend to be counterintuitive, and that’s the whole point that social network analysis helps us to understand. There are strategies to protesting. Protests are not just things that happen spontaneously. They take work, they take strategizing, they take knowledge and expert skill, and they take relationships.”

Most of the people Paasche-Orlow talked to described themselves as Catholic churchgoers and were in their 60s or older, he says, and many came from far-flung Boston suburbs, sometimes driving hours to the clinic. A “fair number” of recent graduates from BU and other colleges rounded out the attendance, he adds. Organizers representing various grassroots groups outfitted this geographically disparate group with flyers, pamphlets, and signs, before and at the protest.

“Anyone could theoretically walk up and be like, ‘Hey, I want to stand with you and support this cause,’” he says. Yet organizers warned people that if anyone grew “too loud, being a little bit too belligerent, or maybe if some of them saw them as a little bit too aggressive or abrasive,” they’d be asked to leave. “They police their ranks.”

With Planned Parenthood less than a block from University buildings, Passche-Orlow says, “these people are essentially protesting on the BU campus. We talk so much at BU about creating and stimulating positive social change through protesting, demonstrating, writing compelling literature, articles. But really, the most frequent demonstration is going on on our campus, but it’s not in agreement with that other set of [progressive] values that we have.”

He also wonders whether the organization and persistent attendance behind this protest on the right might inform campus activists on the other side of the spectrum.

“What are they doing that we could do better,” he asks rhetorically, “in terms of getting someone outside the dean’s office to say, BU should divest from fossil fuels? Or, graduate students and adjunct professors have been trying to get paid better for years. But you see [demonstrations for] it once a year, and then it’s gone.”

There are 2 comments on Undergrad’s UROP Project: Local Abortion Protesters Rely on Restraint, and Unexpected Help