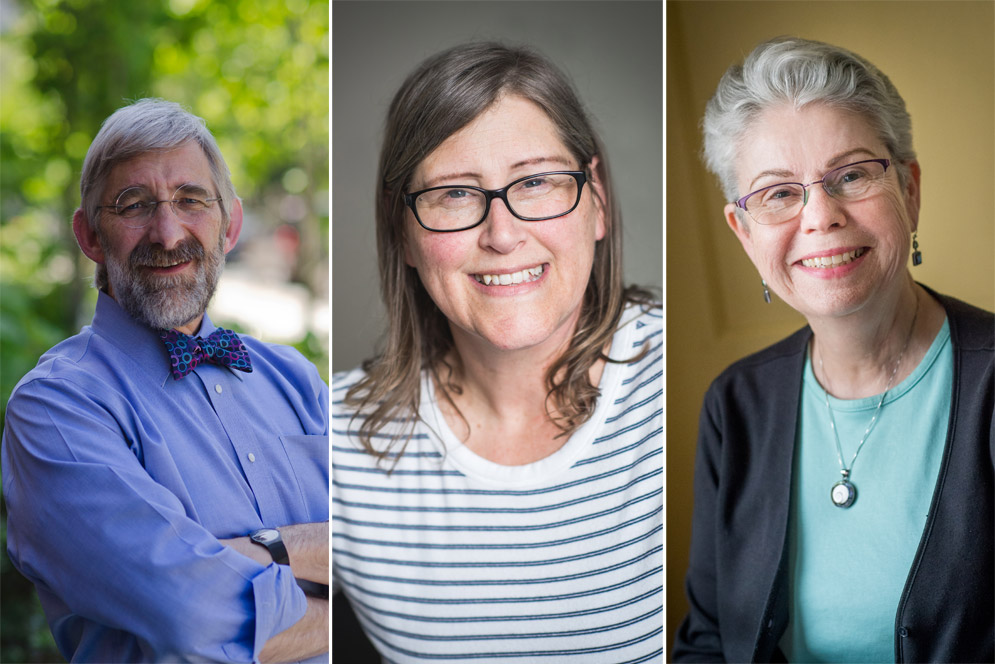 Dennis Carlberg (from left), Caroline Lyman, and Gloria Murray are the winners of this year’s Perkins Awards for Distinguished Service. Carlberg photo by Kalman Zabarsky; Lyman and Murray photos by Jackie Ricciardi

“Being part of a 40,000-person team with a positive impact on the health of our community and our planet—well, it just doesn’t get any better than that,” says Dennis Carlberg. During his decade working at BU, Carlberg, the associate vice president for University sustainability, has helped guide literally Earth-saving University efforts to reduce BU’s carbon footprint, including contributing to the drafting of its Climate Action Plan (CAP).

Those efforts have made him one of the winners of this year’s Perkins Awards for Distinguished Service, bestowed annually by the Faculty Council to three members of the BU community who have served the University with distinction. Carlberg and cowinners Caroline Lyman, assistant director of the Graduate Program in Bioinformatics, and Gloria Murray (Sargent’89, Wheelock’94), College of Arts & Sciences economics department administrative coordinator, will be honored at a ceremony today in the Metcalf Trustee Center at One Silber Way at 5 pm.

The task force that drafted the CAP “could not have completed our work without Dennis’ guidance and leadership” in chairing two working groups, wrote Anthony Janetos, chair of the University’s Climate Action Plan Task Force and a CAS professor of earth and environment, in a letter nominating his colleague for the Perkins Award. He also cites Carlberg’s role in codeveloping Earth House, where student residents pursue academic credit tied to an eco-curriculum; his practicing architect’s expertise in designing cleaner buildings, culminating in the planned Data Sciences Center, “which aims to be BU’s most sustainable building yet”; and the University’s massive power purchase from an under-construction South Dakota wind farm, a key step in BU’s drive for net-zero carbon emissions by 2040.

Lyman has been at BU since 2001 and helped birth its world’s-first program in bioinformatics, the study of biological data using math and computer science. She has helped the program—an interdisciplinary specialty taught by faculty from CAS, the College of Engineering, the School of Medicine, the School of Dental Medicine, and the School of Public Health—graduate more than 325 alumni, wrote program founding chair Charles DeLisi, ENG dean emeritus and a professor of biomedical engineering, in his nominating letter.

“During my nearly three decades at Boston University, I’ve supervised more than 20 staff in various administrative capacities. None come close to Caroline in efficiency, temperament, knowledge, dedication, and enthusiasm,” he wrote.

The day she learned of the award, via an envelope notifying her, she was wearing jeans and a T-shirt for a dressed-down day of grant writing, so she says being embarrassed was her first reaction to the good news. As for the passion behind her job: “I work with some pretty amazing staff who work so hard. I am really, really lucky.”

Murray, a 20-year veteran of the economics department—with 13 years working at Metropolitan College before that—has a hand in issues from junior faculty recruitment to visa applications to tenure reviews—and she “manages much of the paperwork for the department chair,” wrote Barton Lipman, a CAS professor and chair of economics.

In this numbers-focused field, Lipman offers one set of numbers to show Murray’s essentiality: “During the three months when junior recruiting peaks, Gloria keeps up with 700 to 800 applications, 40 to 50 interviews at the American Economic Association meetings, and 10 to 15 campus visits by candidates.”

The stimulus of working with economics faculty, staff, and students, Murray says, is just part of academia’s joy for her: she and her husband have volunteered for almost a quarter century as a host family for the Hubert H. Humphrey Fellowship, which brings foreign professionals to BU and other American universities for a year of study. “We have made some wonderful friendships with amazing Fellows,” she says.

Nominated by professors and chosen by the Faculty Council, Perkins Award winners receive $500, courtesy of an endowment provided by the estate of John S. Perkins, a BU trustee, administrator, and faculty member. The awards were created in 1981.