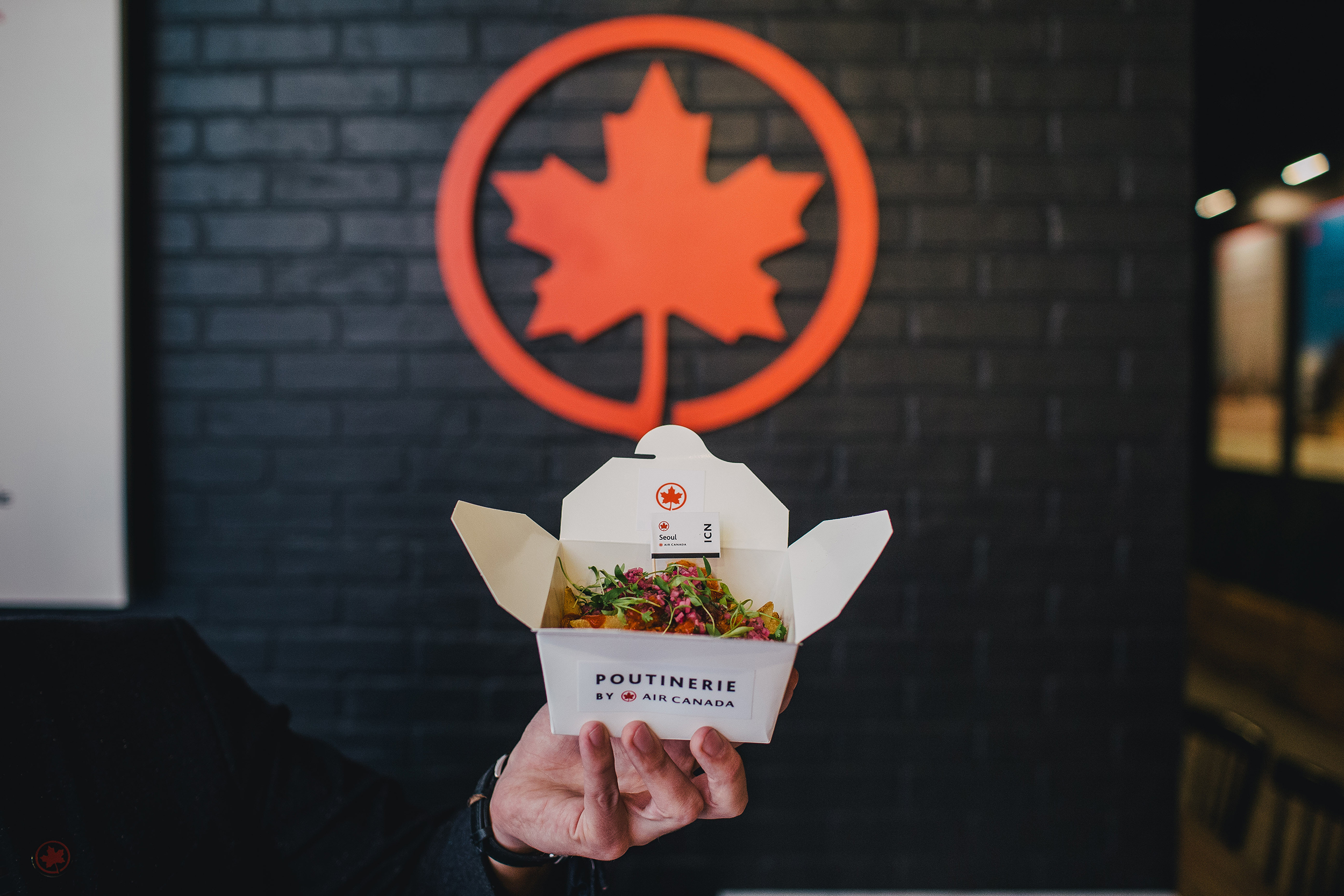 Air Canada (yes, the airline) wants to boost its brand awareness, so its management chose the most deliciously Canadian way possible: serving poutine to the public. Photo courtesy of Air Canada

It’s an exciting weekend in the city, with soccer doubleheaders, a yummy poutine pop-up provided by a major airline (yes, you read that right), and a global music festival happening here on campus.

Air Canada needed to boost its brand awareness, so management decided to do that in the most deliciously Canadian way possible: serving poutine to the public at a pop-up. This isn’t your typical airline food: poutine consists of french fries smothered in gravy, and Air Canada decided to combine poutine with the signature foods of the destinations of some of the airline’s international flights. Options include poutine with flavors from Paris, São Paulo, London, Seoul, Shanghai, Casablanca, Tel Aviv, and Tokyo. Of course, Montreal- and Toronto-inspired dishes also had to be included. All food costs $5 and drinks cost $4, so you can either go for a snack or taste all the options without breaking the bank. Bonus: Air Canada will donate a portion of profits to Fresh Truck, a nonprofit food truck that brings affordable, fresh food to Boston neighborhoods.

The Poutinerie by Air Canada pop-up, at 267 Washington St., near the Downtown Crossing MBTA station, is open every day through October 13, 11 am to 9 pm.

The outdoor marketplace that sits south of Washington Street (hence “SoWa”) is a big hit throughout the warm-weather months in Boston. As long as there’s no rain or unseasonably cold temperatures, early October is a great time of year to browse and shop. At SoWa, you will find plenty of food trucks with options for everyone and stalls selling goods ranging from furniture to artisan hot sauce to clothing.

SoWa Open Market, 460 Harrison Ave., Boston, is open every Sunday, 10 am to 4 pm, from May through October. Find parking information and directions here.

Soccer and Lacrosse on Nickerson Field

Both the BU women’s and men’s soccer teams will play Saturday afternoon at Nickerson Field, with the women taking on Loyola and the men playing Colgate. Hang around after the soccer games to watch the BU women’s lacrosse team scrimmage with the Israeli national team that evening. The Israeli men’s and women’s teams are touring the area to raise awareness and funds for Israel’s first dedicated lacrosse facility.

All three games are at Nickerson Field on Saturday, October 5: the women play Loyola at 1 pm, the men play Colgate at 4 pm, and the women’s lacrosse team plays the Israeli national team at 6:30 pm. Tickets are free with a BU Sports Pass.

Can you name the models of Harry’s two quidditch brooms? The correct answer is the Nimbus 2000 and the Firebolt, and this is the type of trivia you can expect at Trident Booksellers and Café’s Harry Potter trivia contest on Saturday night. The winning team will win a $35 Trident gift card, and the second- and third-place teams will take home themed prizes, so this gives you a valid excuse to binge-read and/or watch all eight movies.

Trident Booksellers and Café’s Harry Potter trivia contest is Saturday, October 5, from 7 to 9 pm, at 338 Newbury St., Boston. Tickets are $10 per person, and each team can have up to six people. Purchase tickets here.

BU is home to more than 11,000 international students and scholars from 140 countries, and thus it’s only fitting for the University to host a celebration of global music. The second-annual festival will feature performers from Niger, Indonesia, and other countries, and in addition to performances, there will be a global bazaar on the GSU Plaza and a cultural fair in the Ziskind Lounge.

The BU Global Music Festival is Friday, October 4, starting at 7 pm at the Tsai Performance Center, 685 Commonwealth Ave., and Saturday, October 5, from 2 to 9:15 pm at the George Sherman Union, 775 Commonwealth Ave. The global bazaar is on the GSU Plaza from 1 to 4 pm and the cultural fair is in the GSU Ziskind Lounge from 5 to 7 pm. All events are free and open to the public. Find a complete lineup here.

The Weekender: October 3 to 6