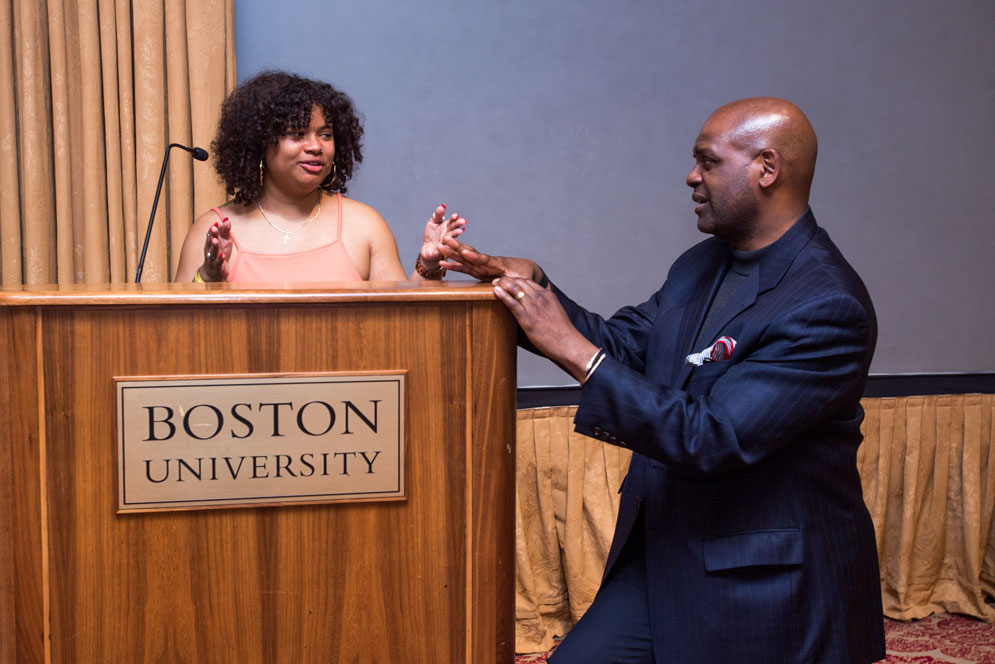 “I want to talk about what a specific time in history my class has lived through, how we have found our voice amidst such a turbulent time, and instead of shying away from all of that, we have really leaned into it and grown from it.”
—Adia Turner

It’s not surprising that Adia Turner, this year’s Commencement student speaker, decided to address and reflect on some of the historic moments that occurred over the course of the Class of 2019’s time at BU. History major Turner reels off a host of seminal events over the past four years: the Women’s March, the #MeToo movement, and two (polar opposite) presidencies, to name a few.

She’ll reflect on these decisive moments when she stands in front of an audience of more than 25,000 guests and graduates Sunday at the University’s 146th Commencement.

“I want to talk about what a specific time in history my class has lived through, how we have found our voice amidst such a turbulent time,” Turner says. “And instead of shying away from all of that, we have really leaned into it and grown from it.”

Each spring, graduating seniors are invited to submit a potential Commencement address to a faculty committee. This year, the committee weeded through 38 submissions before settling on 7 finalists, who then deliver their speech in a mock Commencement setting. Turner has some prior experience—she had given the Commencement address at her high school graduation.

Suzanne Kennedy, senior assistant provost for academic affairs, says Turner is a great choice for Commencement student speaker because of the “expansive influence” she’s had on BU: she is a Posse scholar and has been a student ambassador for the Howard Thurman Center for Common Ground, director of social advocacy for Student Government, an Alternative Service Breaks (ASB) coordinator, and executive editor of the student-run art publication Charcoal.

“What is impressive about Adia is that there is tremendous depth of engagement in addition to the breadth,” says Kennedy, who is Turner’s Posse mentor. “She is a campus leader whose passion around education, social justice, and community draws people in and allows for difficult and meaningful conversations to occur.”

Turner will apply those passions in September when she begins a job as a Teach for America middle school English teacher in St. Louis, Mo.

“I wanted to work in a place that had students that looked like me, because I grew up going to a predominantly black elementary school, and it changed my entire view of what I could do,” says Turner, who minored in African American studies. “Seeing people who looked like me, telling me, ‘You are worth something.’ And St. Louis has one of the highest rates of poverty and lowest rates of literacy in the country.” More than 45 percent of the city’s residents are black, census records show.

Turner, who hails from Stone Mountain, Ga. (also hometown of actor Donald Glover and 30 Rock’s fictional character Kenneth Parcell), says she dreams of one day becoming dean of students at a historically black college, inspired by Kenneth Elmore (Wheelock’87), BU associate provost and dean of students. She wants to help other students of color navigate higher education. Turner vividly recalls her mother telling her that it was a college education that got her out of poverty, and was key to her success.

“My mom was a tiger mom and was always on top of me and my sisters,” Turner says. “When she thought our counselors weren’t paying enough attention to us, because we went to a predominantly white high school, she formed her own little moms group of black mothers. And that’s how I found out about Posse. I realized that a lot of people don’t have that support system when they come to college. And when you come to a big school, it’s easy to get lost in the fold and fall by the wayside.”

Speaking with BU Today at the Howard Thurman Center, Turner refers again and again to Posse and the Thurman Center as two of the most important influences of her undergrad experience. Every few minutes, someone stops by to say hi and give her a hug. She describes her relationship with her 10 fellow Posse classmates—all from the Atlanta area—as a pseudo-cult (“They’ll be at my wedding, and at the end of the day, they ride for me, they show up,” she says).

There are other things she’ll miss about BU as well: the tuscan turkey sandwiches from the Charles River Bread Company, the staff at Pinkberry, the beginning of the school year, seeing the color red everywhere (it’s her favorite color), the T, Nud Pob, Roxbury and Dorchester (where she is a member of St. Mark’s Congregational Church), and Bay State Road.

As her Commencement podium turn approaches, Turner acknowledges being a little nervous, despite classmates’ assurances that she’ll do great. “They’ve told me they’re so excited to hear my speech, but it’s just a lot of pressure to live up to,” she says. “I just want everyone to be able to connect with something I’ve said.”