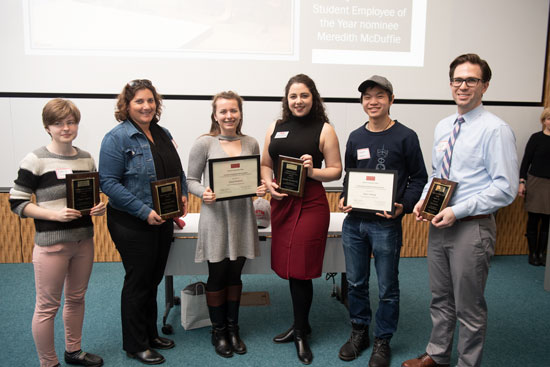 Senior Daria Lugina will have a crowd cheering her on at Commencement, although the folks at the Center for the Humanities may be doing so with mixed emotions—they are losing one of their best student employees ever.

“It is no exaggeration to say that the work at the center after Daria graduates in May 2019 will rest on the foundation she has established,” wrote center administrator Tamzen Flanders in her letter nominating Lugina for Student Employee of the Year. “I can honestly state that Daria has had a profound role in shaping how the center functions and what we can accomplish.”

In order to operate, BU relies heavily on its 10,000 student employees, who help staff almost every campus department, from Dining Services to the Occupational Health Center. Lugina was one of four students celebrated this year. Student supervisors were also honored.

The Student Employment office selects the top nominations and a panel of judges from various BU departments chooses the winners. Their names are then submitted to the Northeast Association of Student Employment Administrators (NEASEA) to be considered for state, regional, and national awards. This year, Lugina won NEASEA’s Massachusetts contest for undergraduate student employee of the year and an extra $100, and Jaroslavsky won its regional graduate employee of the year and $250.

In her work at the Center for the Humanities, Lugina wears several hats. As the office assistant, she answers emails, updates calendars, and prepares the weekly news bulletin. She is also the center’s design intern, producing promotional flyers and posters to promote many of the events hosted there. She has helped to expand the office’s undergraduate programing as well. She was responsible for installing a community art show in conjunction with the center’s annual forum on the opioid crisis, and she organized an undergraduate thesis workshop.

Lugina had no idea she was even being considered for the award and says she was touched when she learned she had won. “My favorite part about the job is all of the people in the office and how much they respect and value the contributions of the student staff,” she says. “I feel very much like I am part of the team and that my ideas get listened to and I have a lot of agency to put forth new initiatives. Also, everyone who works there is just a super kind and incredible person. Sometimes I go into the office even when I’m not working, because it is one of my favorite places on campus. One of our goals for the future is to make it into more of a community space, where both students and faculty in the humanities fields can come together.”

Jaroslavsky has worked for the Dean of Students office for the past seven years, rising through the ranks from staffing the front desk to eventually becoming graduate assistant for administration. In that role, she helps the forward-facing operations of the office run smoothly, oversees programming—especially in the summer—and mentors 40 or so student staffers. “Utilizing her intellectual prowess, adept social skills, and strong work ethic, Jennifer has quite literally transformed the professional essence of the Dean of Students Office,” wrote Dan Solworth (CAS’06), the office’s chief of staff and director of operations, in his recommendation letter.

Oftentimes, Solworth noted, students start working in the Dean of Students office as freshmen and enjoy it so much they stay on until graduation, if not longer, and some have even been known to marry one another. “I state this in an effort to underscore the close-knit aspect and true buy-in that this student staff has, all of which begins with Jennifer and the atmosphere that she creates, emulates, and cultivates.”

“I may be biased, but I strongly believe that what I have in terms of a support system and family in the BU Dean of Students office is incredibly special and unique,” Jaroslavsky says. “As the graduate assistant for administration, I toe the line between the administrators in our office and the student employees in order to create a collaborative and supportive office culture. This means I find myself in the lucky position of getting to work closely with a fantastic group of almost 40 students alongside my 10-plus mentors. All 50 have taught me so much about myself and what it means to care for the people you work with.”

Randi Rotjan, a College of Arts & Sciences assistant research professor of biology, was named Supervisor of the Year. Also honored was runner-up Scott Kohen, area director of the Fenway Campus.

Rotjan runs the Rotjan Marine Ecology Lab, which studies global change in the oceans. More specifically, her team examines how marine species, communities, and ecosystems respond to the stressors emerging in the ocean, and how they will react to expected future ocean change. Rotjan oversees 30 PhD, graduate, and undergraduate students, and her nominating student, senior Jacob Jaskiel (CAS) applauds her for finding time to mentor each and every one. Before joining the lab junior year, Jaskiel was anxious about not having enough research experience. That soon changed when Rotjan put him to work and gave him “as much responsibility as I would take,” he says. In the summer, she secured funding to send him on a research expedition through the remote Phoenix Islands, and he says the time at sea gave him the necessary skills to conduct field research as a professional scientist. Rotjan has helped him network, taught him how to pitch his research succinctly and clearly, and is currently overseeing his honor’s thesis.

“Before working in her lab, I had doubts that this profession was the practical thing for me to pursue,” Jaskiel wrote in his nomination letter. “Now I genuinely feel as though I can make a real difference in the world and help manage and protect our oceans’ resources for future generations.”

Rotjan says she was moved when she learned she’d been selected Student Supervisor of the Year. “I was flattered, honored, and I have to say I’m super proud of my students for all the work they do in our lab,” she says. “I like working with students because of their energy. Everyone feeds off one another, and it creates an electric environment.”

Want to learn how you can nominate a student or a supervisor next year? Find more information here.