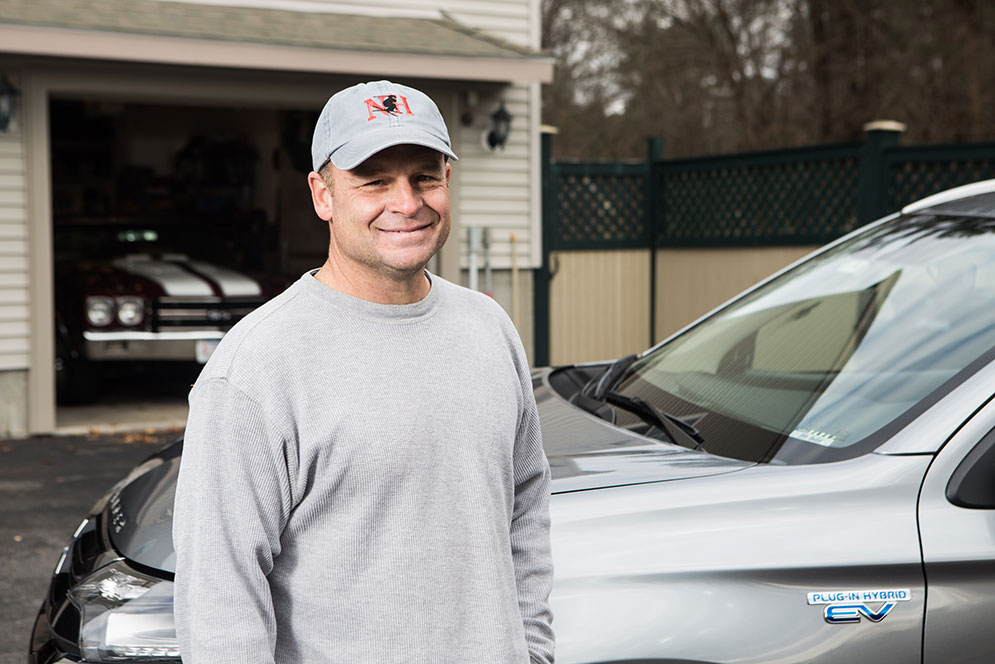 A year ago, the 52-year-old University carpenter made some pretty radical lifestyle changes—he outfitted his home with solar panels and bought a hybrid SUV. Now he charges his vehicle off the sun and drives 60 miles to and from work daily, leaving a zero carbon footprint behind.

It’s cutting-edge behavior, particularly for a self-described Trump supporter and a one-time climate change skeptic. Here’s a look at Old Mike versus New Mike and some of the ways going green did—and didn’t—make a difference for him.

1. Old Mike loved his red Ford S-350 diesel pickup truck, a gas-guzzling beast that could hold a plow or tow his ATVs and tools. It was big, loud, and powerful, he says, and his sons loved riding in it.

New Mike misses his truck, but is adapting. He drives a Mitsubishi Outland PHEV (plug-in electric hybrid vehicle), a “green” SUV with towing capacity. It’s much lower to the road, and he sometimes forgets that it’s on because it’s so quiet. But it gets the equivalent of 72 miles per gallon of gas, which is real money in New Mike’s pocket. 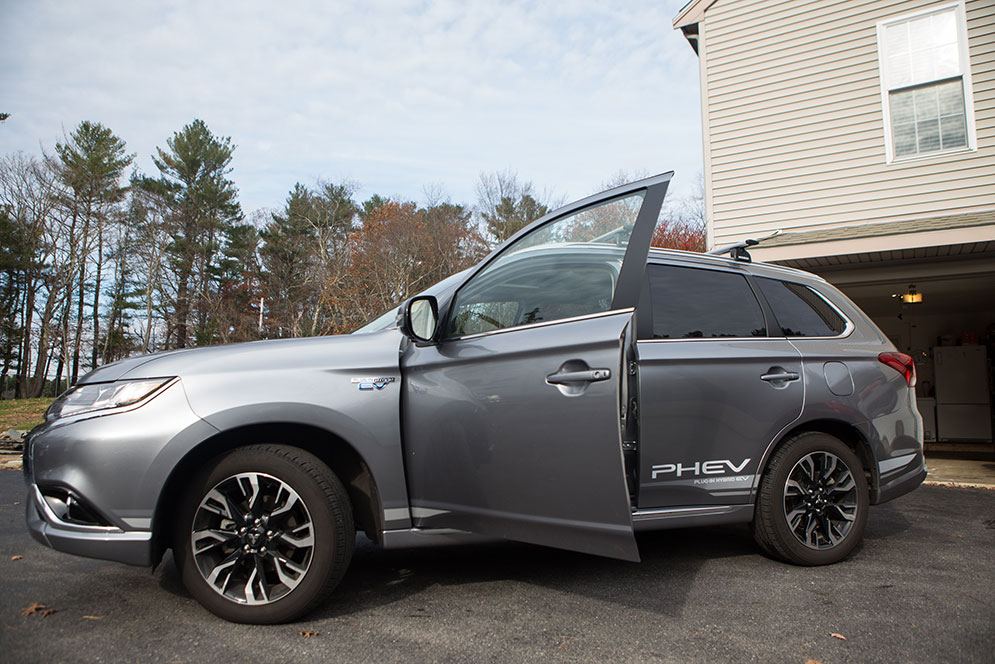 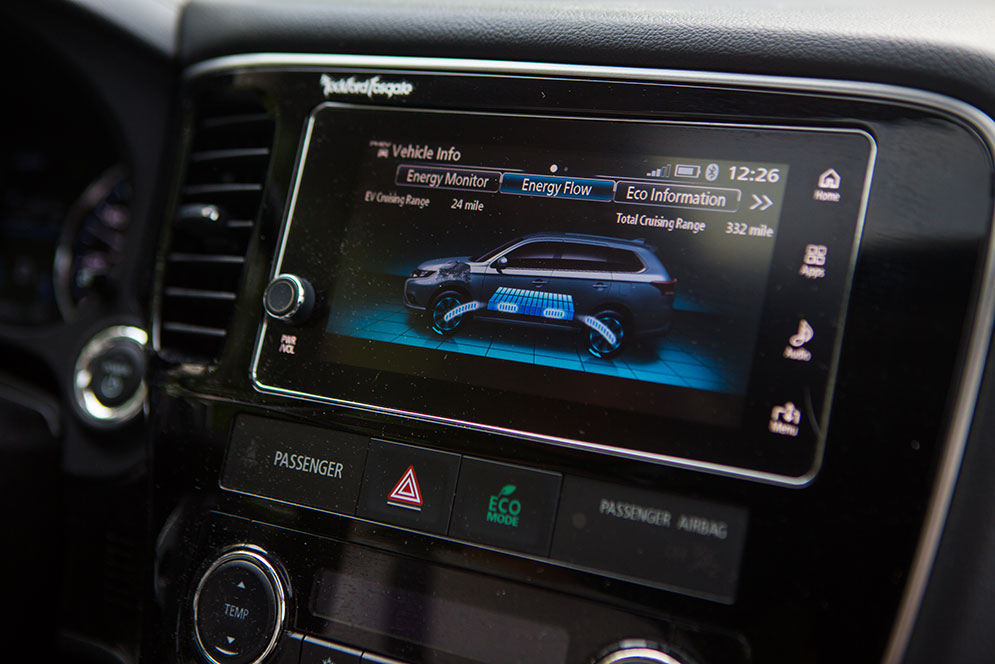 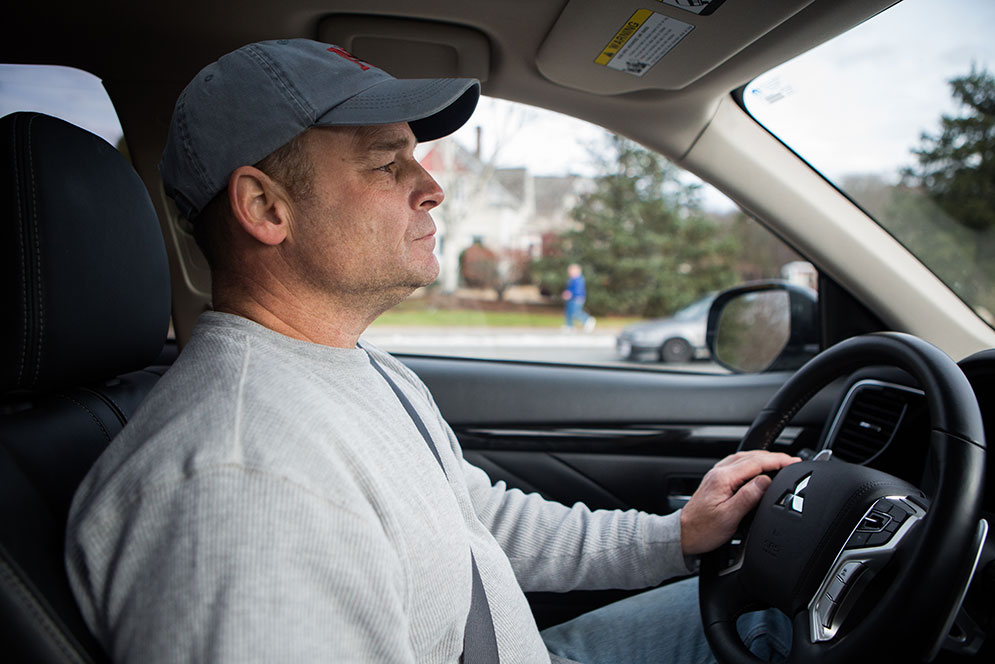 Wagner misses his giant pickup truck, but his new hybrid SUV has regenerative brakes and heated seats and steering wheel and gets great mileage.

New Mike spends $35 or less a month on gas. He charges his hybrid at home in his garage. An inverter transfers and converts energy generated from his rooftop solar array to his SUV, charging the battery in three hours and giving him enough juice to get him to BU.

Once he’s at work, New Mike parks at a charging port for electric cars. There are four of these stations on the Charles River Campus, and two at the Medical Campus, with more expected. For 25 cents an hour, or $20 a month, he can recharge his vehicle for his ride home. 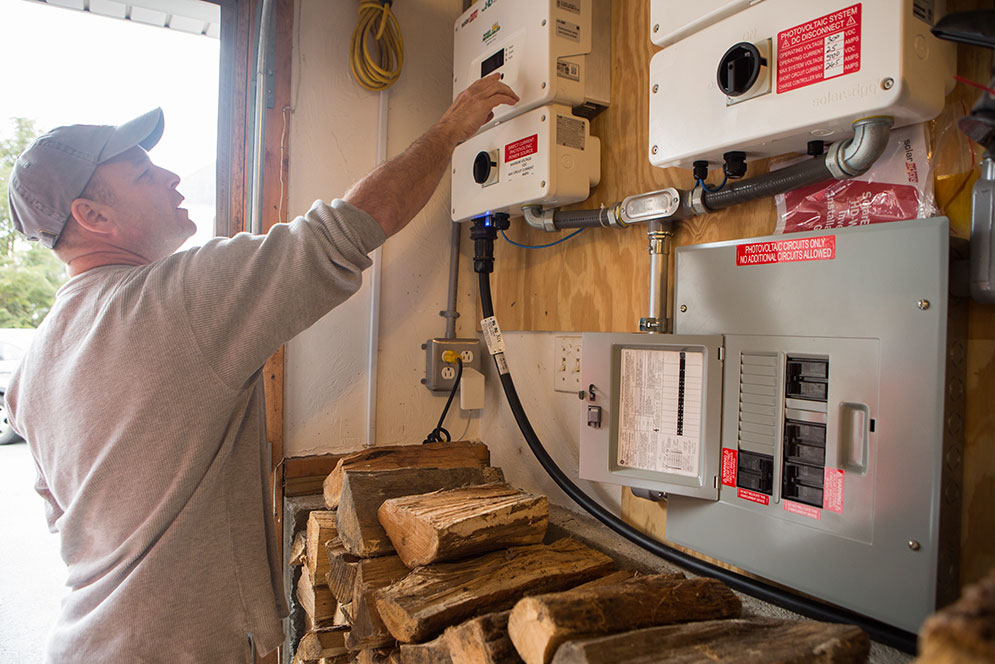 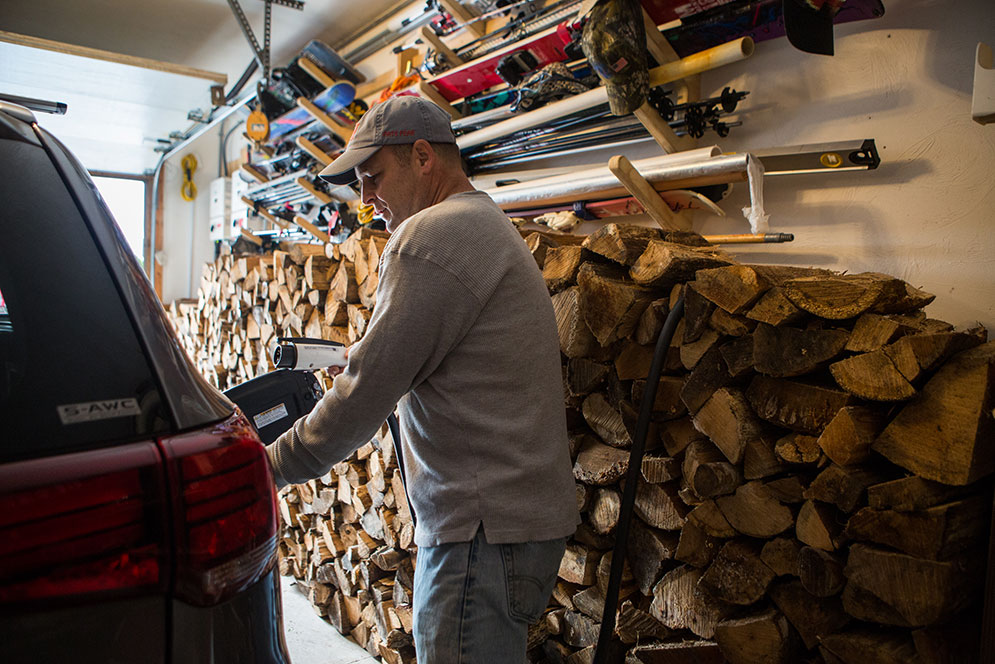 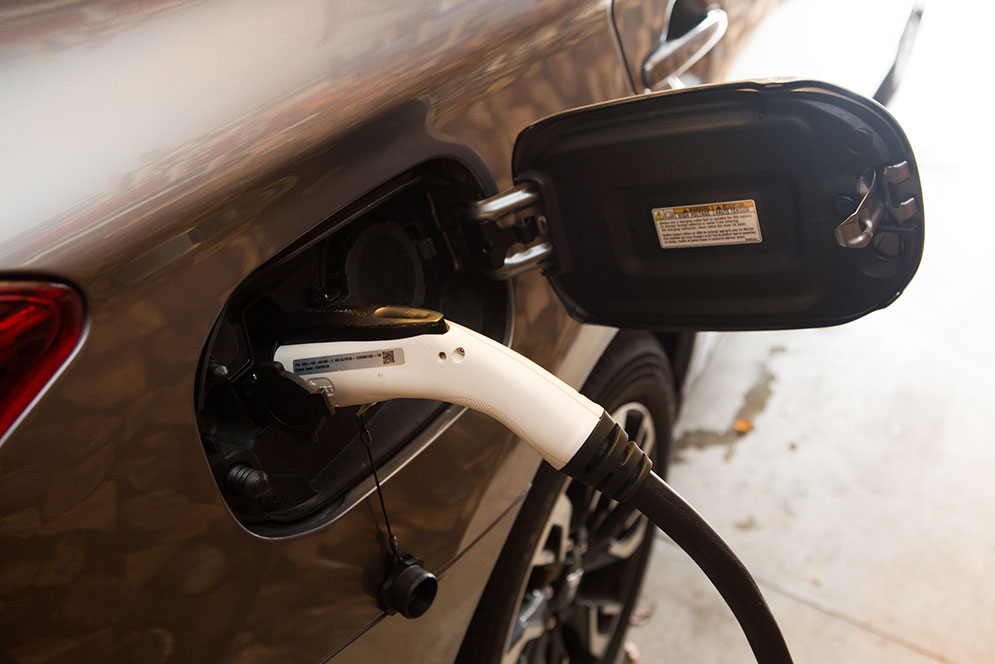 Wagner powers up in his garage. (He also chops his own wood and uses it to heat his house.)

He and an adult son reside in a 3,400-square-foot neo-Colonial in Taunton, where the house air-conditioning and a heated pool would result in an outsized electric bill that exceeded $300 a month.

“The Old Mike didn’t really think about it,” he says.

New Mike still goes big. But after consulting with industry experts, including Associate Vice President for University Sustainability Dennis Carlberg, last year he bought a 56-panel solar array from MassRenewables, Inc., in Bellingham at a cost of nearly $54,000.

It’s a major change, but New Mike wanted to cash in on his home’s extremely sunny location. And various state and federal government incentive programs and tax write-offs are helping bring the sticker price down by more than half, he says.

And because he produces more energy than he uses, he benefits financially. The Solar Renewable Energy Certificates program is currently paying him about $330 for every 1,000-kilowatt hour of energy he produces. He’s on track to earn more than $6,000 through the program this year.

And then there’s his monthly electric bill, which has dropped to—wait for it—zero. That helps him pay off the 10-year loan he took out to buy the solar panel system. When he is done paying it off, in 2028, the system will still have another 15 years under warranty. 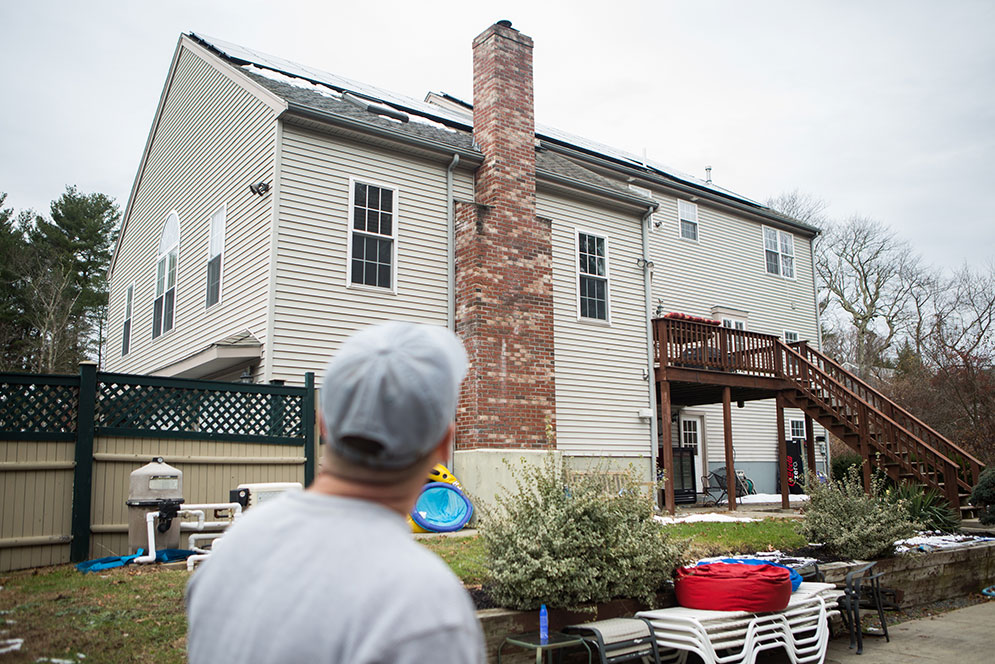 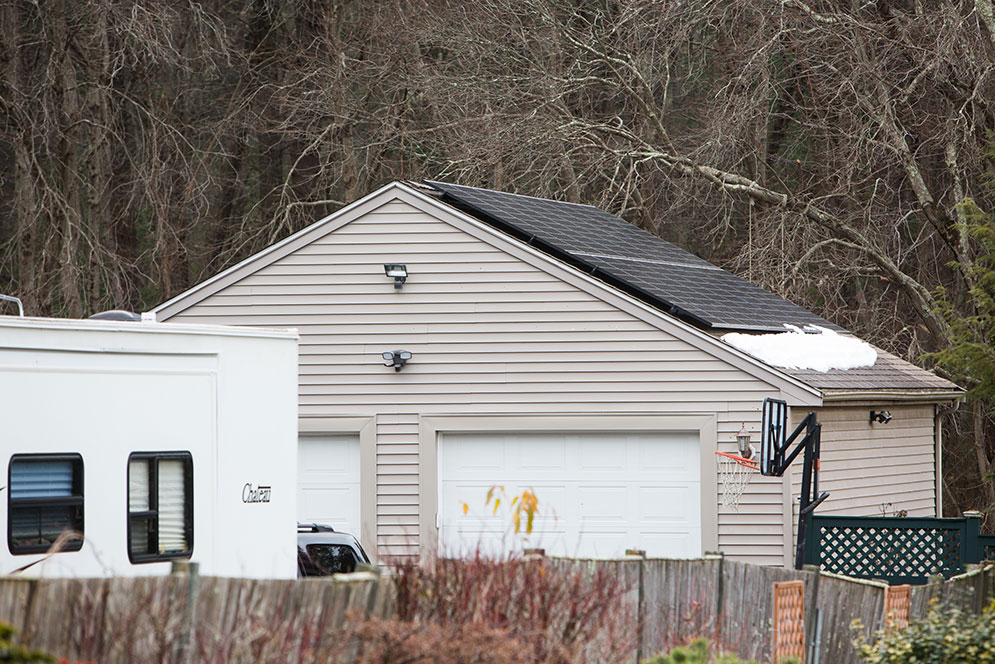 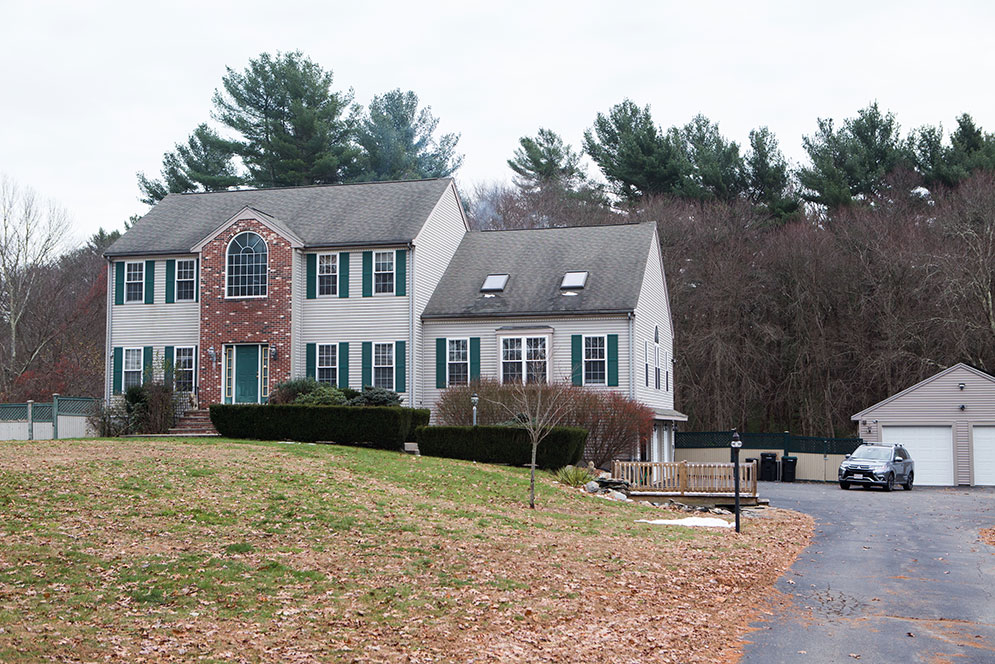 Wagner’s house in Taunton gets light nearly all day (when the sun’s out), a feature he’s turned into an asset.

4. Old Mike was skeptical of claims that solar energy could be affordable or easy.

New Mike acknowledges that there have been unexpected glitches.

Late last year, both inverters mysteriously stopped metering his sunlight intake. MassRenewables technicians eventually determined that repairs to his home’s Wi-Fi system had burned out the circuit boards in the inverters, which had to be replaced. New Mike says that was done at no charge and that he was also credited with the power he would have produced during that two-month period.

But he’s very happy with his system so far. He says he can typically spot a system malfunction using an app on his phone called SolarEdge, which collects real-time data from his rooftop as well as daily, hourly, and monthly data on his output.

New Mike also likes watching the electric meter on the side of his house on sunny days, because it actually spins backwards as his solar panels collect energy to offset his usage. 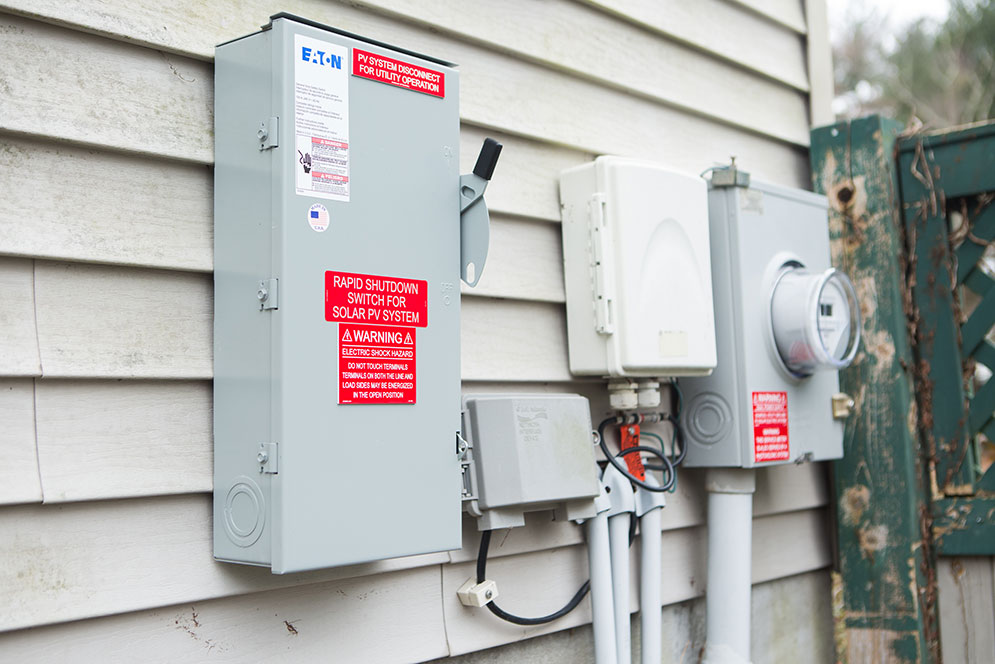 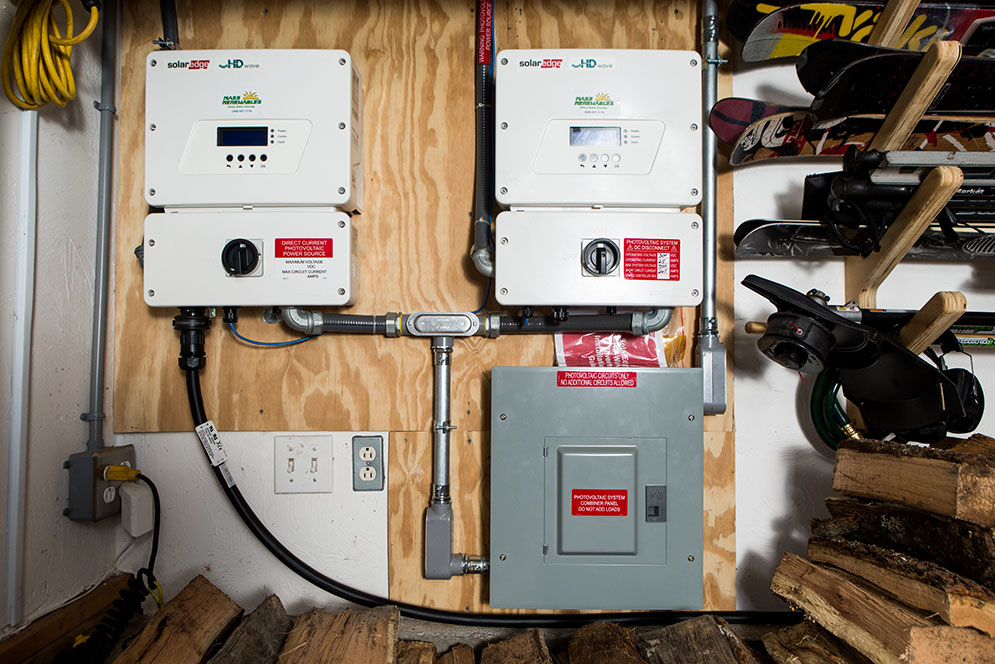 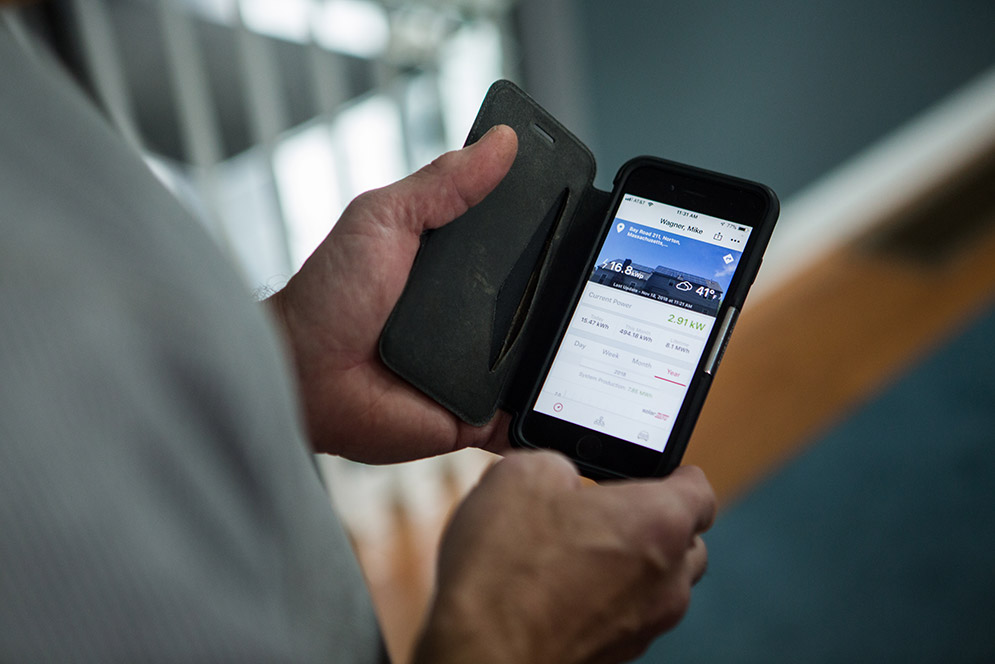 Wagner’s solar panels connect to two inverters in his garage; one of them has a nozzle that charges his hybrid. He monitors his energy production and usage on his mobile phone using an app called SolarEdge.

5. Old Mike was a conservative-leaning talk radio fan who loved muscle cars. (He has a 1970 Chevelle in mint condition parked in his garage next to his hybrid.) He was not an environmentalist.

New Mike is a conservative-leaning talk radio fan who still loves muscle cars, but who also has adopted a greater consciousness about living sustainably. Does that mean he’s an environmentalist?

There are 8 comments on BU Carpenter: From Gas Guzzler to Green Machine

BU Carpenter: From Gas Guzzler to Green Machine
8
share this