Motherhood has its highs and lows. So does completing a PhD. But doing them together? It’s a bit like juggling chainsaws and eating a hamburger while riding a unicycle.

Competent, accomplished, and very tired, Liz Upton (GRS) has done both and has stories to tell. The 34-year-old will graduate from BU May 19th with a PhD in statistics and has already accepted a tenure track teaching position at Williams College. And she achieved this as a new mom raising a baby girl.

It’s a happy ending, one that belies Upton’s behind-the-scenes slog to success—a messy, chaotic, and sometimes frustrating journey that upended life as she knew it.

Like the time Upton was asked to present her research at a symposium in Connecticut in front of hundreds of colleagues in her field. It wasn’t the intricacies of statistical analysis that tripped her up–it was her breast pump. She had accidentally left a piece of it at home and was unable to get a replacement.

Mortified at the prospect of leaking milk during her presentation, she found herself in the hotel bathroom, expressing milk by hand and asking herself, “What am I doing with my life?”

“I would recommend getting pregnant,” Upton reflects now, without a trace of sarcasm. “As long as you know what you’re getting yourself into.” 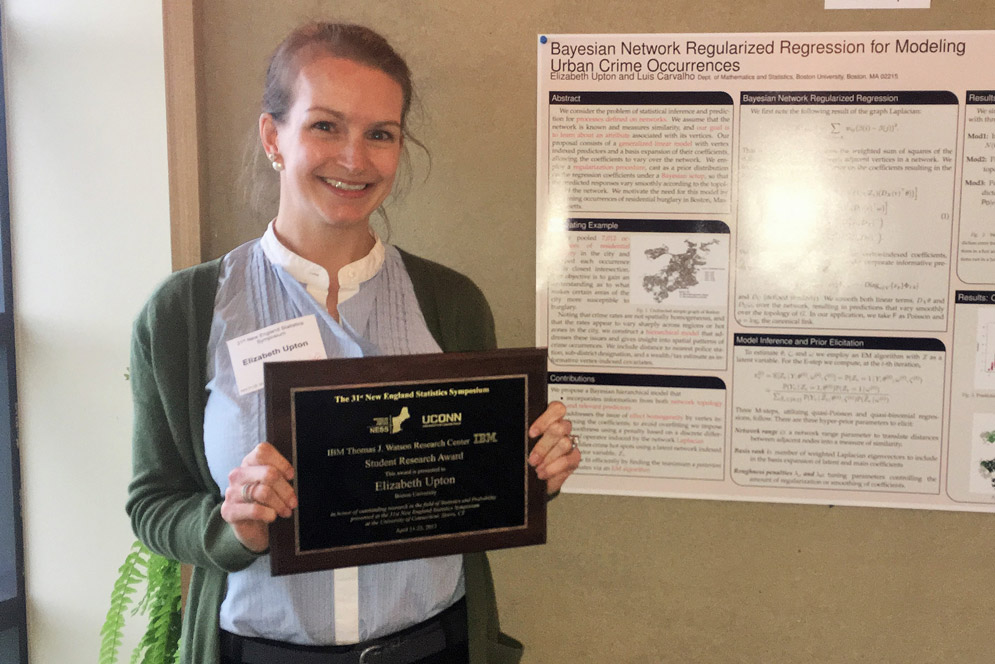 Upton at the conference where she forgot part of her breast pump. Photo courtesy of Upton

Even statisticians like Upton can’t say the exact numbers of women who get pregnant while getting a PhD. Studies are scarce.

But more professional women who are having children over age 30 are speaking out about the reality of motherhood, in all its complicated, mashed-peas-and-carrots-on-your-clothes glory. Just Google “PhDs and pregnancy” and see the essays and comments on the subject. In a recent New York Times piece, economist Emily Oster says she envisioned a sort of air-brushed motherhood that would allow her to breastfeed an infant under a cute color-coordinated cover while joining friends for weekend brunch.

“That is not what it was like at all,” she writes. “Like many women, I found breast-feeding incredibly hard. I have one particularly vivid memory of trying to nurse my screaming daughter in a 100-degree closet at my brother’s wedding.”

Some experts have speculated that one of the reasons men with math and science PhDs outnumber women is related to the years of intense schooling the degree requires, typically between the ages of 25 and 33, a time that also coincides with a woman’s prime childbearing years.

Those women who get their PhDs in the sciences also secure tenure track positions and tenure at lower rates than men, often because of the demands associated with marriage and children. Married women with children are about 35 percent less likely to enter a tenure track position after earning a PhD than married men with children, according to “Keeping Women in the Science Pipeline,” a 2011 article in The Annals of the American Academy of Political and Social Science. And when they do, they are 27 percent less likely to achieve tenure than their male counterparts.

Upton says having a family was always a top priority for her and her husband, Ted Upton, a Boston entrepreneur. After graduating from the University of New Hampshire and Harvard’s Graduate School of Education, Liz Upton worked in finance and as a high school math teacher before applying to BU’s PhD program in statistics. Knowing she wanted a family, before enrolling, she asked other graduate students in the program about the feasibility of having a child.

Everyone directed her to the lone graduate student who had done both, she says.

Undeterred, Upton became pregnant early in her third year, while she was studying for her qualifying exams and teaching undergraduate classes. She apprehensively told her advisor, Luis Carvalho, a College of Arts & Sciences associate professor of mathematics and statistics, who hugged her and helped her create a flexible work schedule.

Carvalho, himself a father of two, says he tried to be both supportive and realistic. “I said, ‘It’s going to be harder on you,’” he recalls. “‘But I have no doubt you’ll ace this.’”

With her easy laugh, calm demeanor, and pearl earrings, Upton may have outwardly seemed like the picture of confidence and maternal joy. But there were tears and self-doubt, she says, as well as months of severe morning sickness—and not just in the morning.

“I vomited most days,” she says, noting that she was able to manage it with a doctor’s help. “After a few months, you just learn to deal with it. My work actually served as a distraction in some sense.”

Then she went into labor three weeks early and two days after passing her qualifying exams. Upton and her husband suddenly welcomed Eleanor into the world on November 7, 2016.

But the birth was easier than what was to come. Health complications from childbirth slowed her recovery, and Eleanor’s early arrival meant Upton still had unfinished coursework to submit to faculty. She says she gratefully took advantage of BU’s paid maternity leave for the spring 2017 semester, happy for the time with her daughter, but it was also an isolating experience.

“I actually found the weeks after childbirth to be surprisingly difficult,” she says. “I guess I wasn’t mentally prepared for the healing process to take so long.”

The exhaustion was often so intense that it made it hard to function. Upton says her husband was tremendously supportive and helpful, but could take only a week off from his business, which was hard on them both. But looking back, she says it also made it possible for him to take days off when they needed it.

Upton finished her coursework and research from home while newborn Eleanor slept, sometimes reading the same paragraph over and over. After three months, she began meeting weekly with her advisor again. By June she was excited to return to work, and motherhood had taken on new meaning.

“Eleanor reminds me of what’s important in life,” she says.

A semester after her return, the end within sight, Upton says, she became confident that she would complete her dissertation. Yes, there was guilt about time not devoted to her daughter, but she also began quoting Hillary Clinton: “Never doubt that you are valuable and powerful and deserving of every chance and opportunity in the world.”

Upton says one of the benefits of working at a University is having a flexible schedule, something she used to her advantage. She worked around Eleanor’s day care, sleep, and feeding schedule, waking up at four most mornings to work on her dissertation. She and her husband alternated day care drop-off and pickup, and she occasionally brought Eleanor to department staff meetings when day care was closed due to snow.

Upton also bought a breast pump charger that allowed her to pump while commuting to work from Watertown. At the office, she pumped in a supply closet, amid old textbooks and office supplies, and later in the first floor office she shared with other female graduate students, who drew the shades to give her privacy.

Masanao Yajima, a CAS associate professor of the practice, mathematics and statistics, says if Upton struggled, she certainly didn’t show it.

As the father of a 10-month-old and a 5-year-old, he says they often shared their parenting odyssey, from teething to sleep training. “When we got down to business, she was just another PhD student,” Yajima says. “As I say this, I can imagine my wife glaring at me.

“I don’t want to give the impression that what Liz has been doing is a trivial thing,” he adds.

No offense taken, says Upton, who wanted to be treated like any other graduate student. “Getting a PhD is hard, but it is supposed to be hard. I would never want them to take it easy on me because I am a mom—or a woman.”

Upton defended her dissertation on April 3 in front of four faculty members in a nondescript classroom on the second floor of CAS. If the setting was ordinary, the mood was not. Upton’s husband, daughter, and more than a dozen extended family members had come, excited about watching.

If it’s been a marathon so far, Upton realizes she’s been competing in an ultra. As she prepares to move to western Massachusetts, she’s now focused on expanding her family and bringing her passion for teaching statistics to Williams students. There’s also the possibility of tenure.

Suddenly the past is receding fast.

“There were times that I was so exhausted that I couldn’t function, but I can’t remember that feeling anymore,” Upton says. “Instead, I am just really excited about what the future will bring.”

Pregnant and Pursuing a PhD, the Ultimate Juggling Act

There is 1 comment on Pregnant and Pursuing a PhD, the Ultimate Juggling Act

Pregnant and Pursuing a PhD, the Ultimate Juggling Act
1
share this