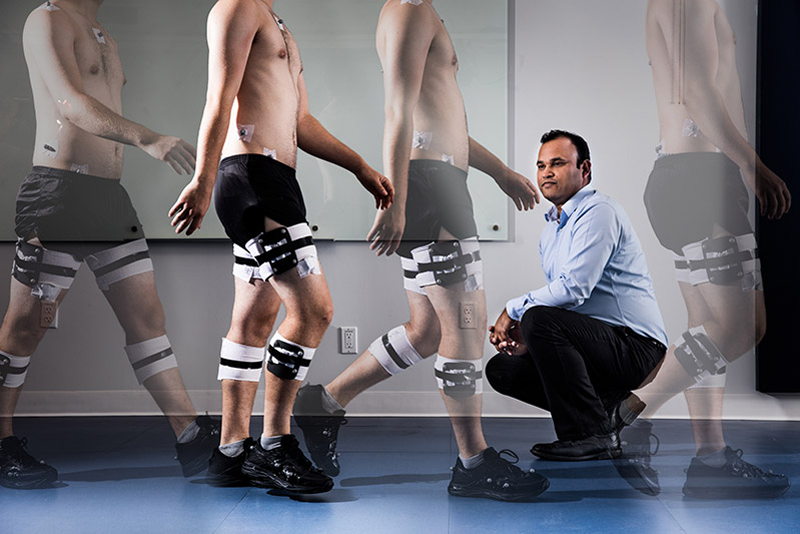 Deepak Kumar uses a 3-D motion capture system—featuring wearable sensors that are tracked by cameras attached to rails mounted on the walls of his lab—to build a sophisticated picture of human movement. Photo by Conor Doherty

It’s a bit of a chicken-or-the-egg conundrum. People with knee osteoarthritis don’t walk enough, which can leave them stiff and put them at a higher risk for other health problems. But, when people with knee osteoarthritis do walk, they tend to be a biomechanical mess, overactivating their muscles, walking bowlegged, or putting more pressure—called joint loading—on the knee. This further damages their cartilage, aggravating the condition and increasing their discomfort. In response, they walk less.

“We have these two problems,” says Deepak Kumar, a Boston University assistant professor of physical therapy and athletic training. “The trick is, how do we solve them both?”

About 14 million people in the United States have symptomatic knee osteoarthritis, according to a 2016 study published in Arthritis Care & Research. The joint cartilage is gradually degrading, the meniscus—the shock-distributing cartilage—getting torn and worn down, and muscles steadily weakening. It adds up to difficulty walking and chronic pain. Physical therapy, weight management, painkillers, and steroid injections provide some relief, but for more than half of sufferers, those limping through the condition’s advanced stages, a total knee replacement is probably the only remedy.

Kumar’s goal is to limit or delay surgeries, but first he must fix that chicken-or-the-egg problem: helping people become more active and ensuring their newfound enthusiasm for fitness doesn’t make their knee osteoarthritis worse.

He got a glimpse of a potential solution while he was a postdoctoral researcher at the University of California, San Francisco. There, Kumar worked with Professor Frederick Hecht on a project testing ways of encouraging people with prehypertension to be more active. As part of the clinical trial, one group of participants was trained in a technique called ChiRunning, which is inspired by tai chi and applies mindfulness practices to improve running form. The fundamental tenets, says Kumar, are “increased body awareness, engaged core, reduced stride length, midfoot strike, increased step rate, and relaxed upper body.” His job was to conduct motion analysis on the participants at the beginning of the trial and three months later; he found their biomechanics—how the body and muscles work together to propel someone forward—had shifted.

“The ChiRunning group showed changes in their movement patterns that seemed to suggest their loading on the knee was lower,” he says. They weren’t putting as much pressure on the joint, particularly the inside of the knee, or putting their foot as far in front of their body; the researchers concluded that the biomechanical differences “may be associated with reduced lower extremity stress.”

“I thought, ‘OK, this should work for osteoarthritis,’” says Kumar. He started a small second study with healthy subjects to take a closer look at ChiWalking, which uses similar techniques as its running counterpart. He found it also reduced impact forces on the body, and the knee in particular.

Now, with a grant from the National Institute of Arthritis and Musculoskeletal and Skin Diseases, part of the National Institutes of Health, he’s launched a feasibility project to see if ChiWalking can help people with knee osteoarthritis. For six months, one group will attend regular ChiWalking sessions, while a second will participate in classes on osteoarthritis and the importance of exercise. At key stages in the study, Kumar will bring the subjects into his Movement & Applied Imaging Lab at Sargent to measure their walking patterns and quantify the amount of force their knees are bearing. The lab has a 3-D motion capture system—subjects wear small sensors that are tracked by cameras attached to rails mounted on the walls—and a force platform built into the floor; participants also wear electromyography sensors that measure muscles’ electrical activity. Kumar, who teaches Instrumentation for Analysis of Motion, a course focused on using technology in research, has eight undergraduates in his lab to help him and his research fellow process the data.

But he’s aware that for the ChiWalking intervention to be a success—improving gait and helping people get and stay active—it’ll need to work without the fancy equipment.

“Traditional approaches on changing how people walk require them to come to a lab like we have and then be shown their data and how to change it,” says Kumar. “That’s very time and cost intensive. You have to do it one person at a time.”

For the second six months of the ChiWalking project, the emphasis will be on helping participants stay active—safely—without visiting the lab. Study participants will be given a fitness tracker and access to a mobile health app. The app, which Kumar is developing in collaboration with BU’s Software & Application Innovation Lab, pulls in activity data from the tracker, asks questions about mood, sleep patterns, and pain levels, and sends motivational messages. Users can also set goals, while a physical therapist can monitor progress to help them stay engaged with the program.

“If we target pain and problems with mood and sleep, as well as physical activity, we’re more likely to be successful in getting people with osteoarthritis to be more active; people who have these problems tend to be least active and are at greatest risk of developing other health problems,” Kumar says.

That fits with his other ongoing research projects, which emphasize finding ways to better monitor patients as they go about their daily lives. In the lab, he says, subjects usually wear light clothing, are plastered in sensors, and watched constantly—and there are no bumpy sidewalks or uneven paths to navigate. “They always end up changing slightly how they’re walking.”

Kumar recently tested the ability of a small inertial sensor—an inexpensive, eraser-sized gadget that includes a gyroscope—to track movement and gait without the need for all the cameras and force plates. When put on the thigh, the sensor can track the knee as the foot hits the ground, monitoring any varus thrust, a quick, but damaging, outward movement of the knee. He presented the results at the 2018 American Society of Biomechanics annual meeting.

If Kumar’s ChiWalking studies are successful, it could provide hope for the millions of people experiencing symptomatic knee osteoarthritis. The combination of consumer technology and a commercially available gait-training technique will allow the intervention to be done in group settings at a low cost. “It’s very scalable,” Kumar says.