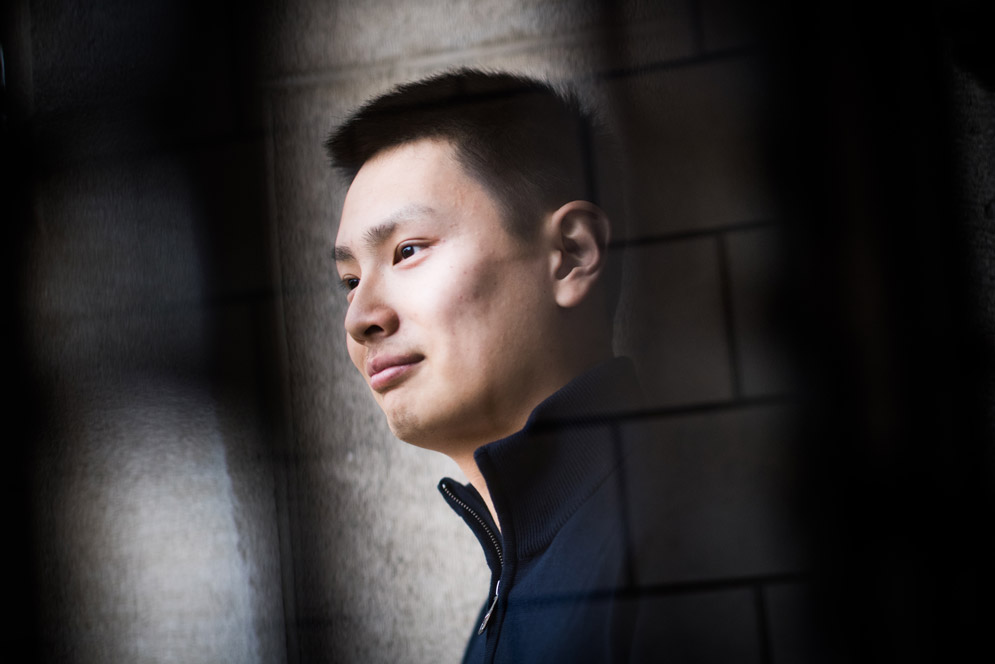 Junyu Chen (CAS’19) became a legend among his peers for offering advice about BU to incoming students from China. Even with the 12-plus-hour time difference between China and Boston, he was available almost 24-7. Photo by Jackie Ricciardi

“You can present your real self. We are all students of BU. You can be Bostonian and Chinese.”
—Jacky Chen

For the past four years, Chinese international students had a saying for how to get honest, unfiltered answers to questions about BU or Boston: Ask Jacky Chen.

I want to get to know American students—is it okay to just strike up a conversation with someone after class? I’m a little shy about my English.

Is it as hard to get a high GPA at BU as some rumors suggest?

Which dorm should I live in?

What clothes should I buy to survive the New England winter?

What is the BU Hub?

Whatever the questions about BU, or about Boston, Jacky Chen (CAS’19) either had the answers—or knew how to get them.

A Shanghai native and past president of the BU Chinese Students and Scholars Association (BUCSSA), Junyu Chen, Jacky, as he is known among his thousands of friends on the ubiquitous Chinese social media platform WeChat, became something of a legend among his peers.

For incoming freshmen from China, many who had never been to Boston—or for that matter, the United States—before, Chen, who considers himself Chinese-Bostonian, became a one-person orientation team. Before students, and their parents, even started packing, they were firing questions from China via BUCSSA’s WeChat channel. It is part of the legend of Jacky Chen that even with the 12- or 13-hour time difference between China and Boston, he made himself available practically 24-7.

“People talk about him as if he were a human dictionary,” says Chen’s friend junior Muhan Yu (COM), who worked with him at the BUCSSA. “How could he possibly answer anything at anytime? It’s just too amazing to be true.” Yu says that “even my mom knows Jackie’s role as a BU Chinese student influencer. I believe most of the Chinese parents know him. He’s the most famous one.”

Chen, who majored in economics and plans to pursue a graduate degree at Duke University’s Fuqua School of Business, acknowledges that it has been time-consuming, but says he has no regrets.

Hopefully, he says, what he’s done to help his fellow students from China will “inspire others to follow and show how kind and helpful BU students are.” Sipping a S’mores Frappuccino at the GSU Starbucks, with his finals behind him, Chen says he hopes the work he did becomes his legacy. “Many Chinese students and parents need help and advice, especially if they are sending their kid to a completely unknown place for four years.”

With Google Maps difficult to access in China because of government censorship, parents would turn to Chen with their concerns about BU’s streets and surrounding neighborhoods. Are they safe? he was often asked. Chen, who braved Boston gridlock to take driving lessons (he got his license junior year), always offered them reassurance.

Before he arrived at BU four years ago, Chen had been to the United States only once, to attend an academic summer program at Stanford University during high school. “For the first month, it was pretty hard,” he says. “You feel a little embarrassed when you say something wrong. I got a lot of help from the BU Chinese Students and Scholars Association.”

He says that “BU, and Boston, are pretty inclusive. All you need to do is start a conversation with someone.” And it helps to know something about football—especially the Patriots. During sophomore year he and some friends went to the Patriots Super Bowl victory parade. “It was very exciting,” he says. “But I didn’t know what was happening. I didn’t know what the Super Bowl means to Americans.”

He learned quickly. And passed his Super Bowl knowledge on via WeChat so others would not feel as out-of-touch as he had.

Chen also posted advice about speaking up in class. “Asians are sometimes very conservative,” he says. “You need to be brave and express your ideas, right or wrong.”

After making it through his first blizzard, he took to WeChat to offer his Survival List for Winter: “Heavy clothes. Canada Goose is expensive, but it keeps you warm. A hat, and it should fit tightly. Good boots. Uggs are recommended.” When it comes to Boston rain, he advised forgetting the umbrella. “An umbrella is a waste of money. It will just break.”

An American history buff, Chen urged his WeChat followers to walk the Freedom Trail and visit Lexington, where the first battle of the American Revolution was fought in 1775.

For international students, the cultural terrain can be tricky. For example, a lot of Chinese students, like Chen, adopt American-sounding first names before they come here so their professors and classmates won’t have to struggle with Chinese pronunciation.

“We think it is our duty to adapt,” says Chen, who chose Jacky, in homage to film star Jackie Chan, when he was a student at an international high school in Shanghai, where many of the teachers were British.

While he was fine with being called Jacky, he says, he was reluctant to give up his Chinese name, Junyu, which means “beautiful universe.” He approached College of Arts & Sciences lecturer Pary Fassihi, his freshman writing teacher, with this question: “Is it appropriate to use my Chinese name?”

He took those words to heart, and by sophomore year, Chen, who is fluent in English and Mandarin, decided to go by both names. “Whatever you feel comfortable with,” he told people who asked which he preferred.

On WeChat, he stuck with Jacky, but he told his online community that students should feel free to keep their Chinese names. “I said, ‘You can present your real self,’” Chen says. “We are all students of BU. You can be Bostonian and Chinese.”’

Chen’s parents arrived from Shanghai on Tuesday for graduation. His mother is a business executive and his father is a manager of a sales company. Eventually, Chen says, he hopes to return to China and work in investment banking.

“I want to make my parents proud,” he says.

On Sunday, he will.

“Ask Jacky Chen.” BU Chinese Students Did, All the Time

There are 10 comments on “Ask Jacky Chen.” BU Chinese Students Did, All the Time

“Ask Jacky Chen.” BU Chinese Students Did, All the Time
10
share this