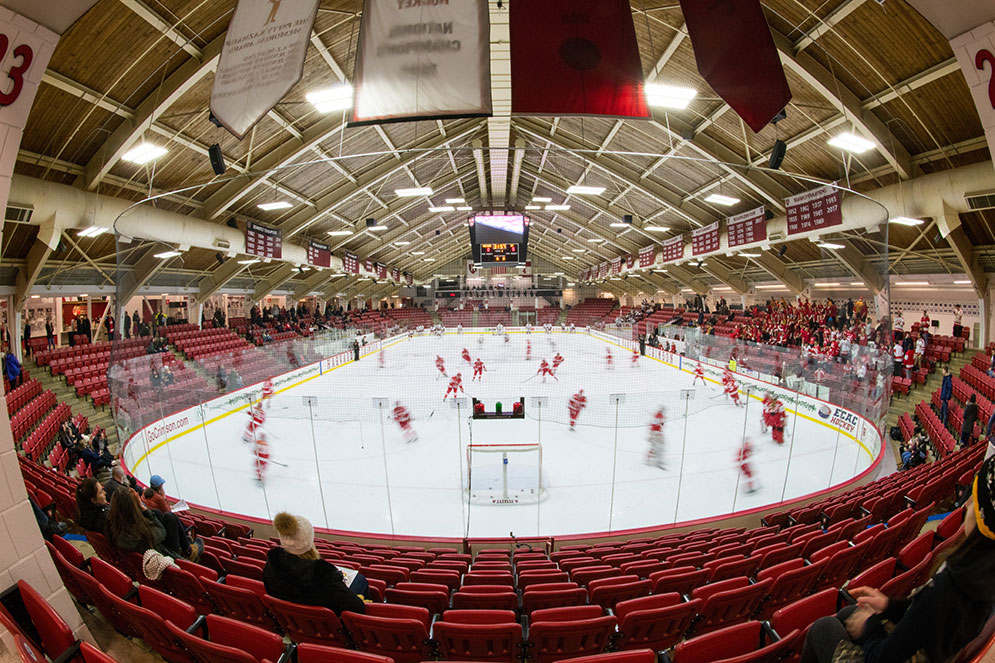 The women’s ice hockey Terriers warm up before taking on the Crimson in the 41st Women’s Beanpot Tournament championship game at Harvard’s Bright-Landry Hockey Center on February 12. Photo by Andy Costello

With a flick of the wrist just before midnight on February 12, BU junior Sammy Davis (CGS, Sargent) poked the puck past Harvard goaltender Lindsay Reed, netting the No. 7 Terrier women’s hockey team its longed-for first Beanpot championship as a varsity sport. The women’s only other title came back in 1981, when they were a club team. The 3-2 overtime win at Harvard’s Bright-Landry Hockey Center set off a raucous on-ice celebration and gave Terrier coach Brian Durocher (Wheelock’78) much reason to celebrate. “We’re all excited that monkey’s off the back,” Durocher said after the game. “It’s been a long time coming, and I couldn’t be prouder of the team.” 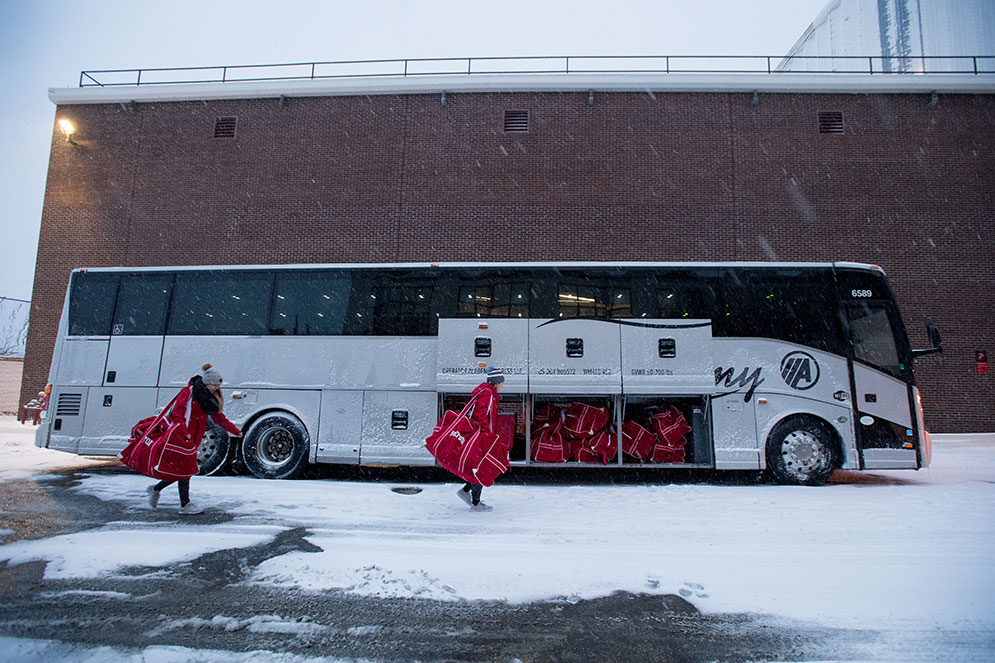 As the snow picks up, the BU women’s ice hockey team gets ready to head to the Beanpot championship round. Photo by Cydney Scott 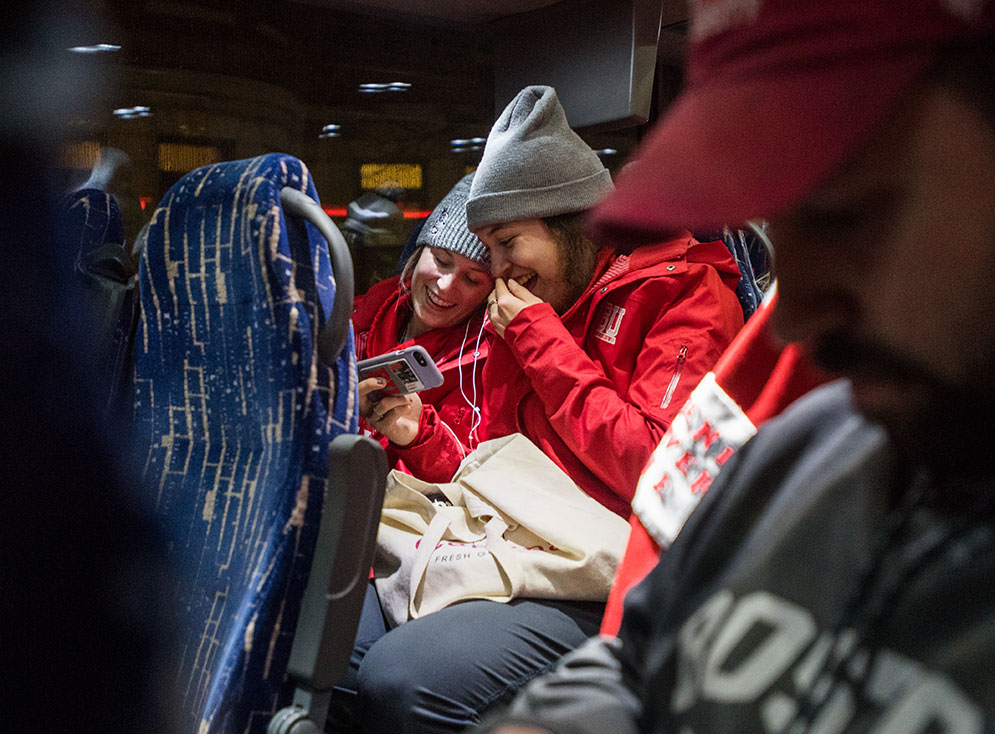 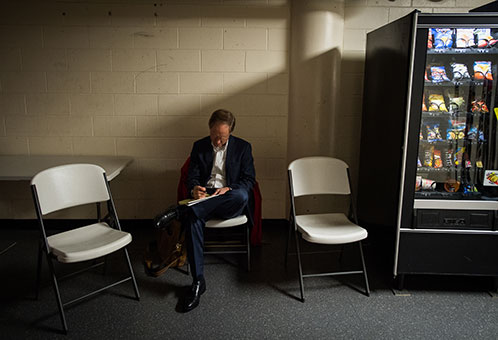 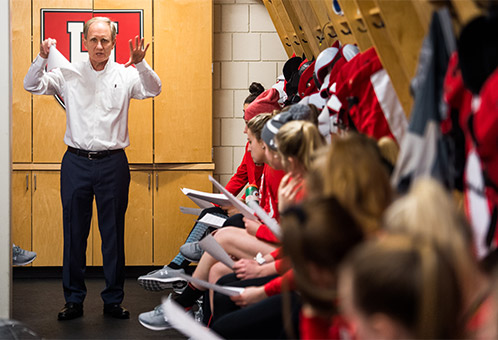 Head coach Brian Durocher (Wheelock’78) going over his notes outside the Bright-Landry locker rooms before the game (left). Some last-minute advice from Durocher in the team’s locker room (right). Photos by Cydney Scott 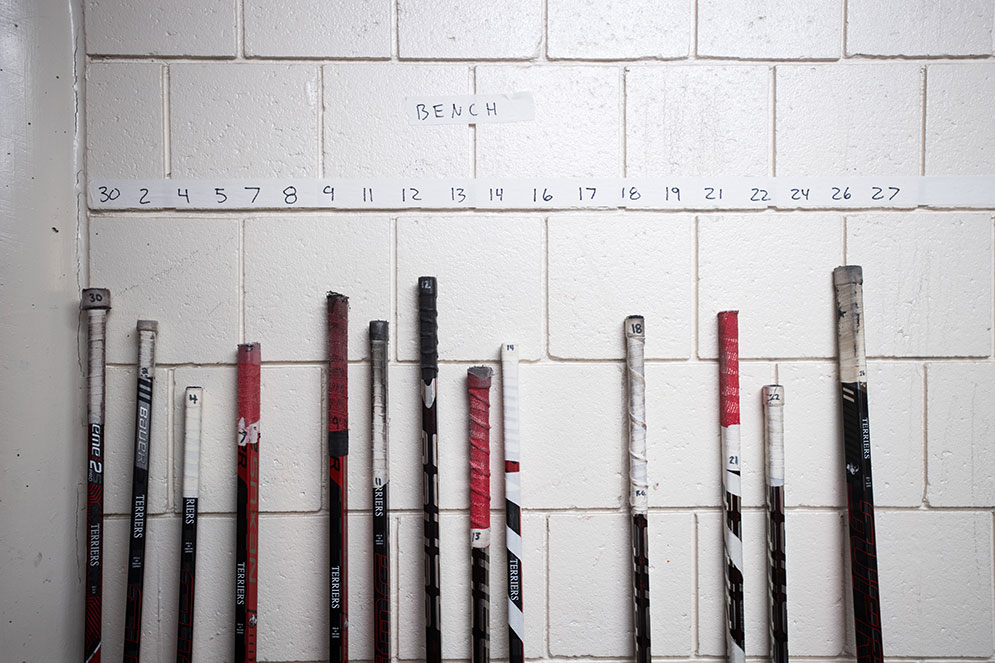 The Terriers stunned the Harvard Crimson at 13:38 in sudden-death overtime to win the 2019 Women’s Beanpot Tournament, their first championship since 1981. Photo by Cydney Scott 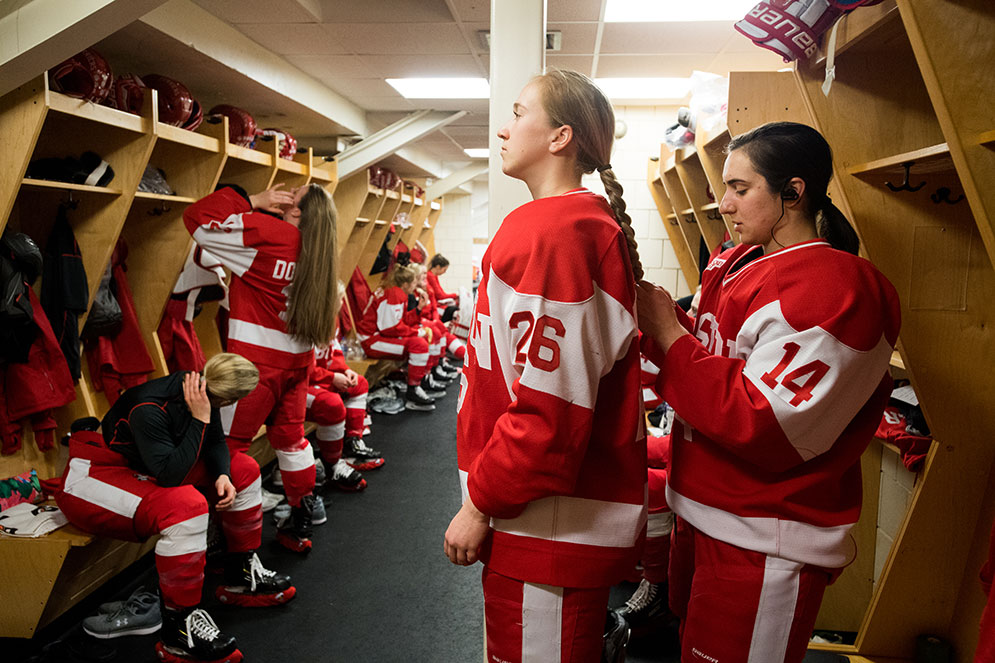 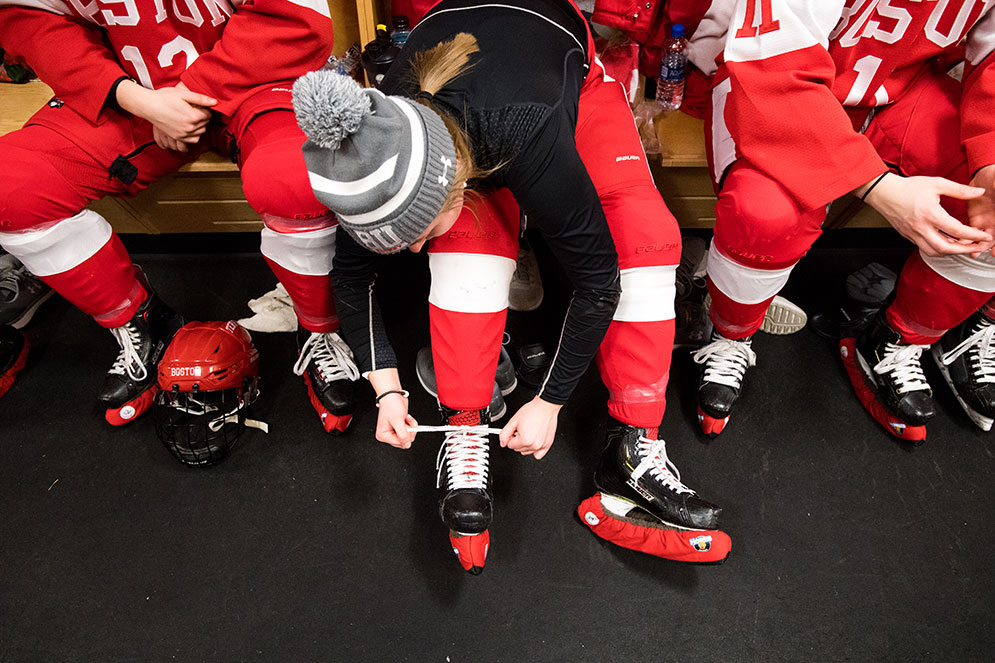 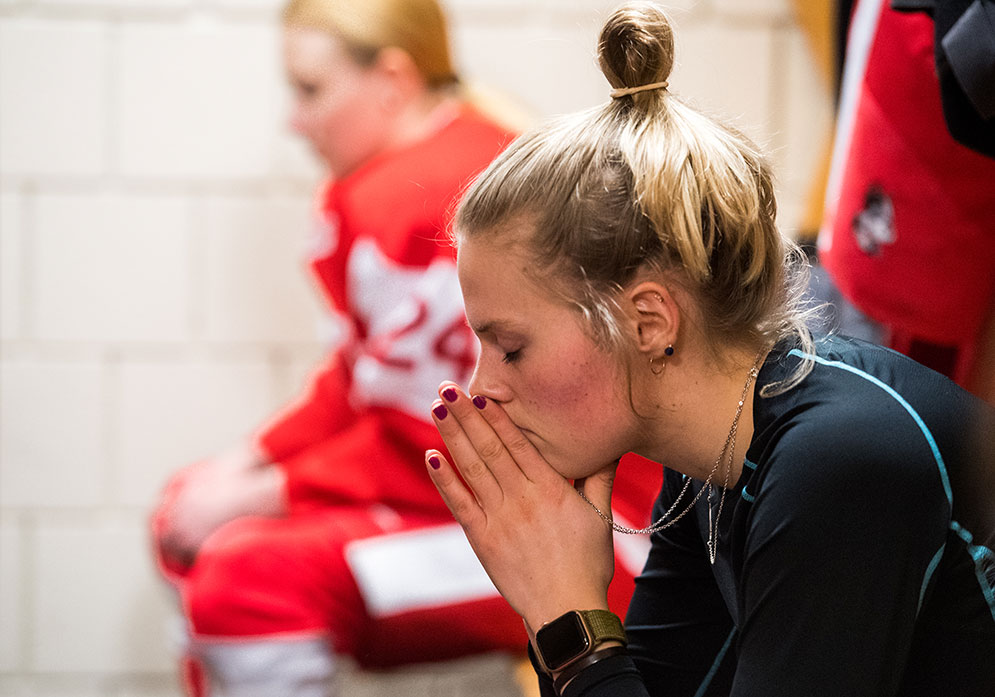 The Terrier team getting ready to go up against Harvard (top). Stanley in the locker room before the championship game (bottom). Photos by Cydney Scott 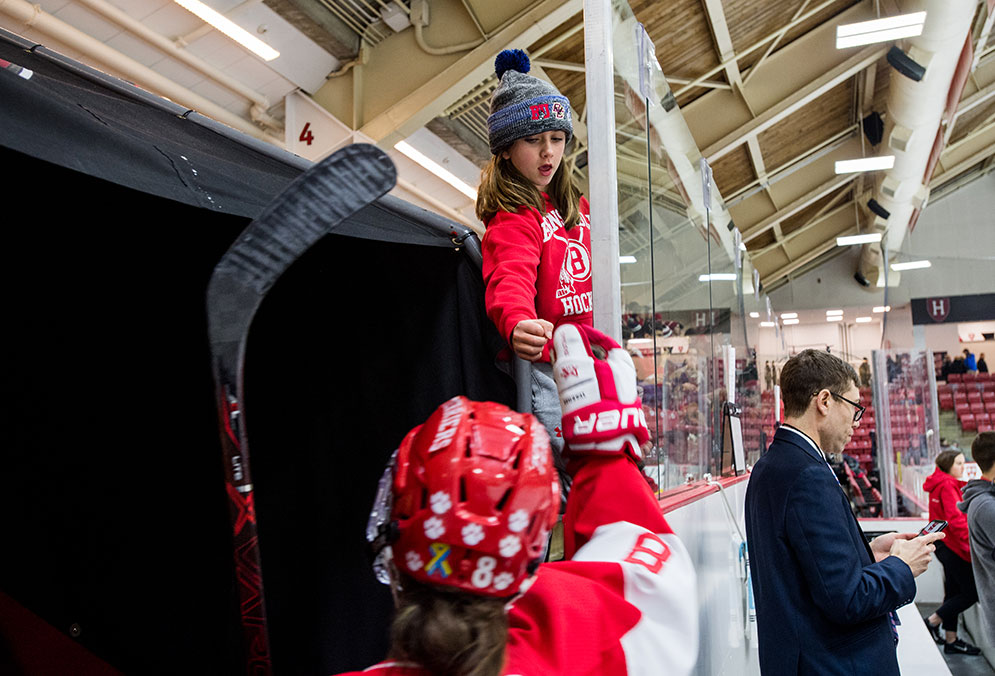 A fist-bump for luck from 11-year-old Callie Kenney, of Barnstable, for the Terriers as they leave the ice after the pregame warm-up. Photo by Cydney Scott 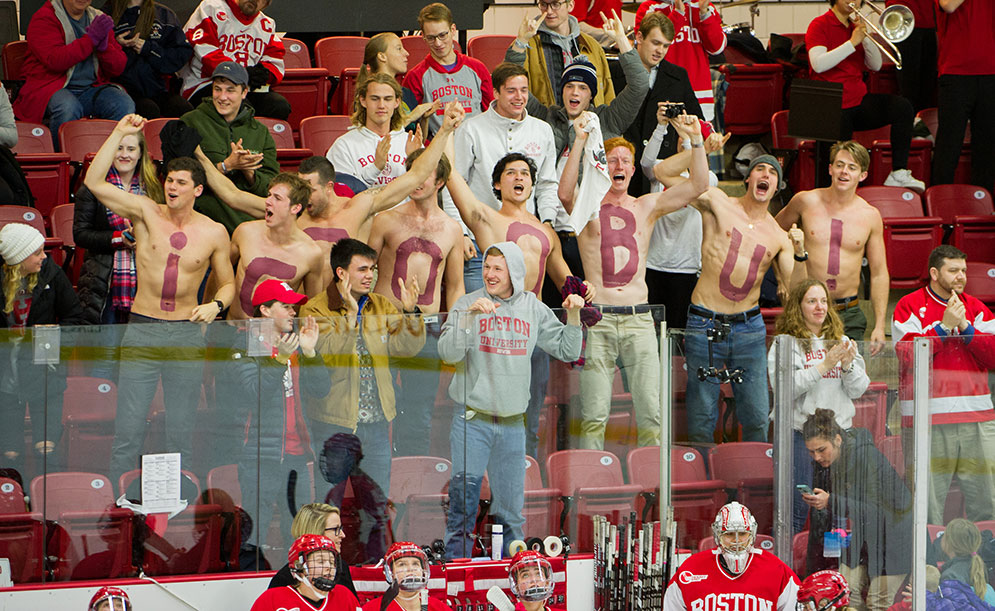 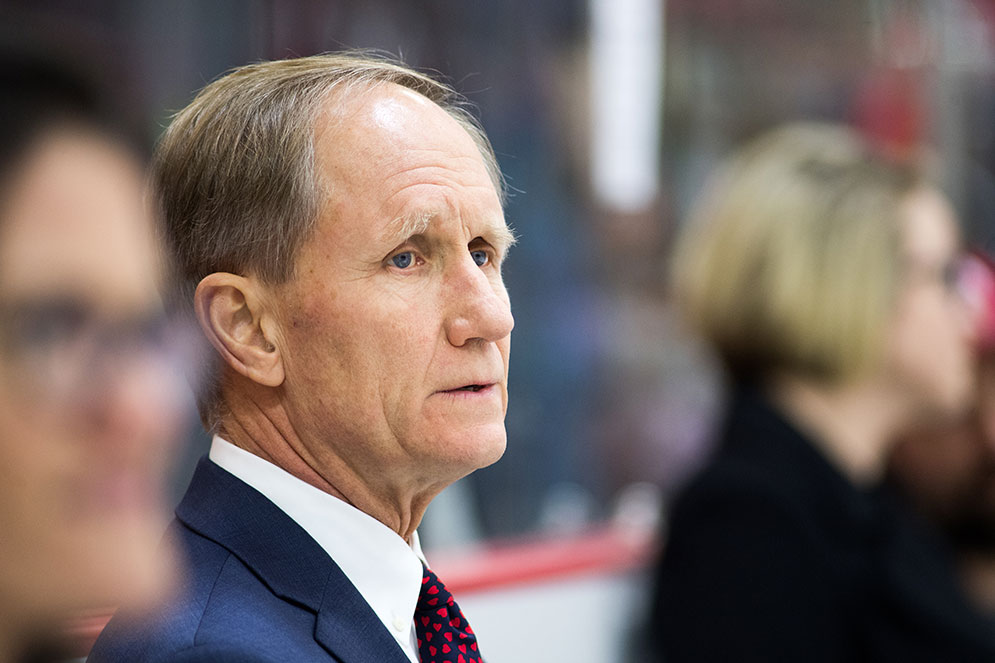 Durocher, inaugural coach of the BU varsity women’s ice hockey team, during the first period of the Beanpot final. Photo by Cydney Scott 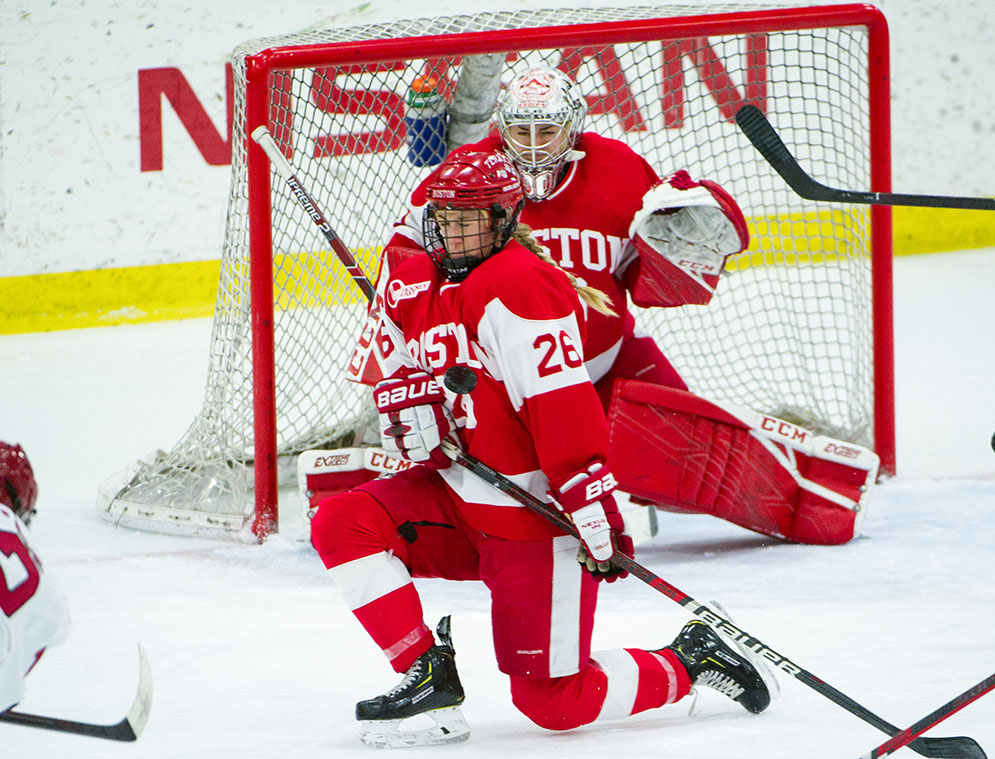 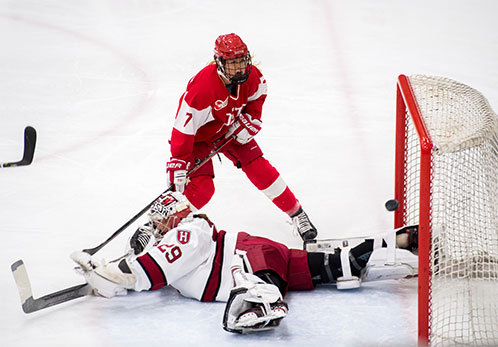 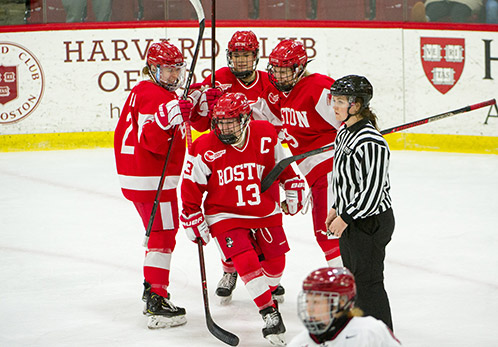 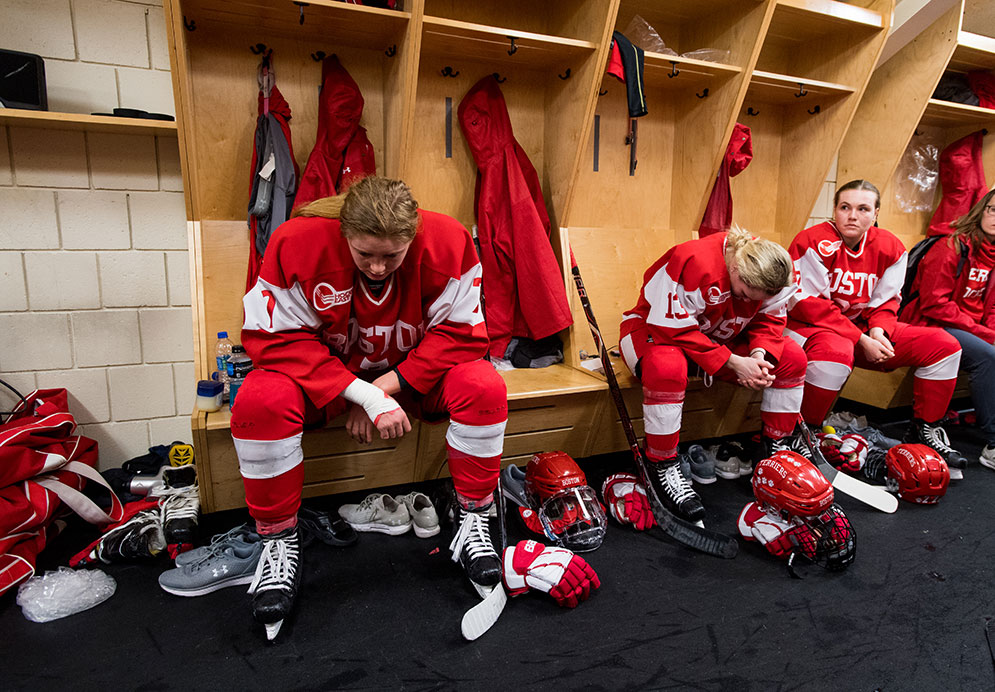 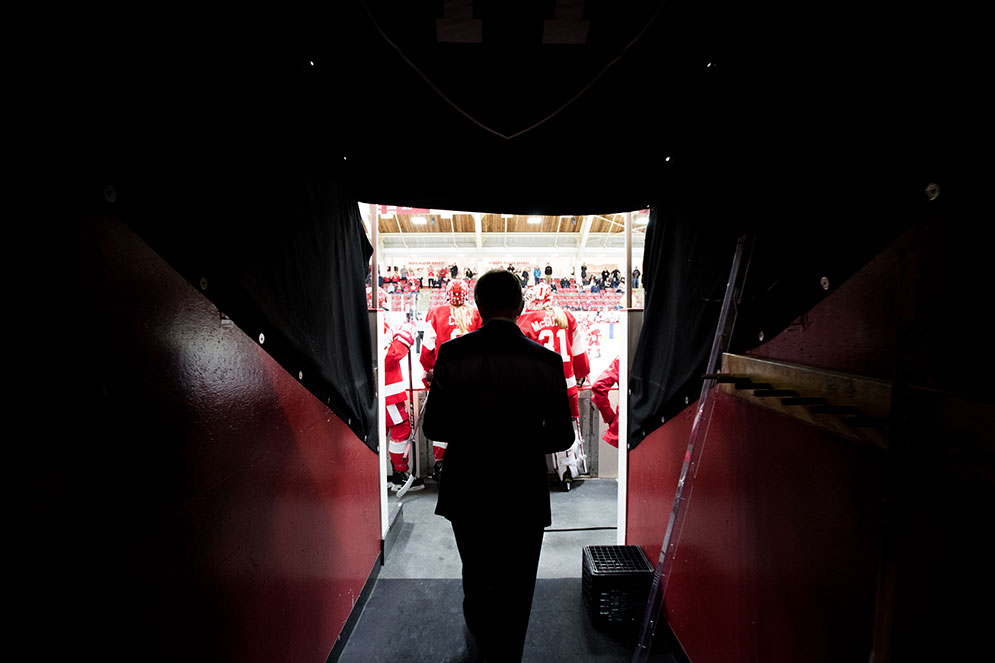 This is it: Durocher heads out for the start of sudden-death overtime. Photo by Cydney Scott 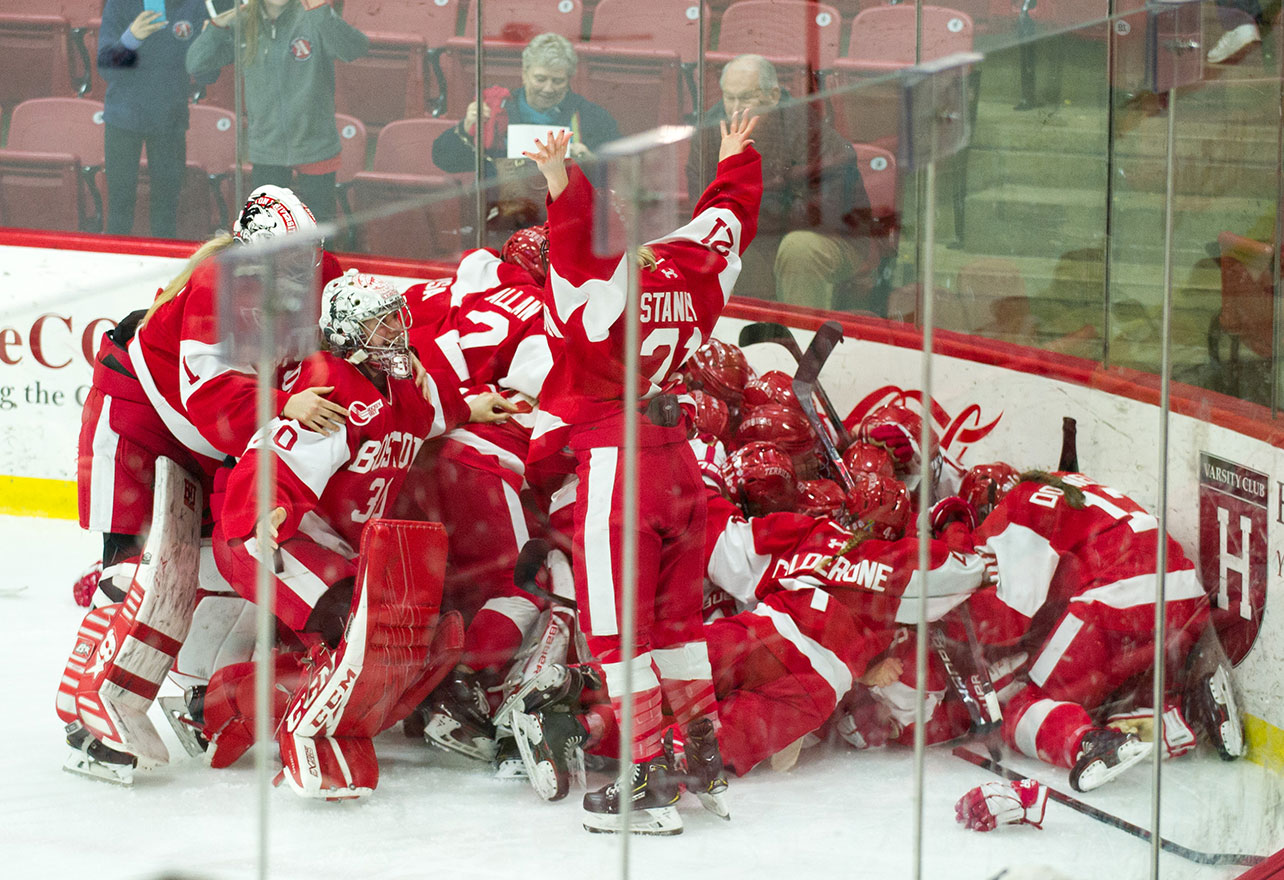 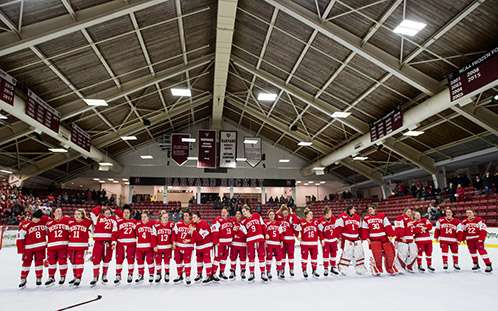 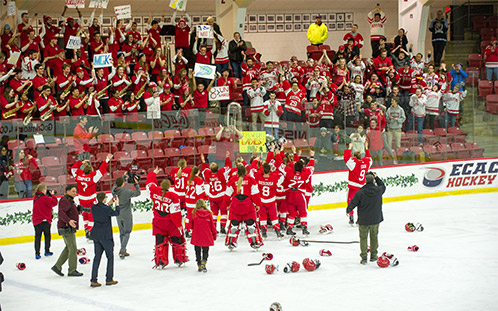 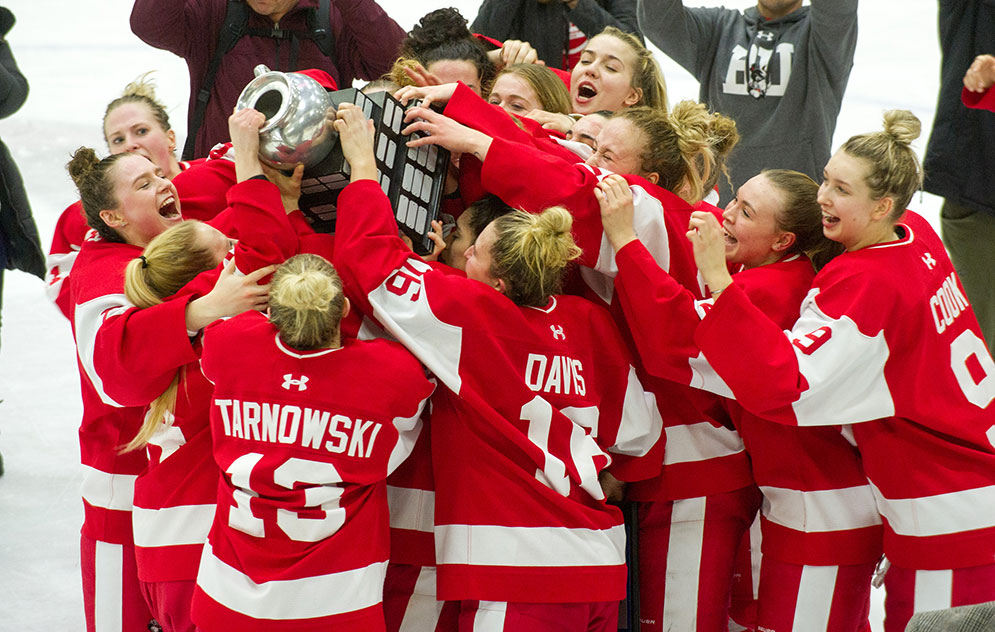 The winners line up to receive their first Beanpot trophy since becoming a varsity team, in 2005 (top left). Acknowledging their fans: the grateful team after clinching the Beanpot championship (top right). The BU women with the precious trophy after defeating Harvard for the championship (bottom). Top left photo by Cydney Scott. Top right and bottom photos by Andy Costello 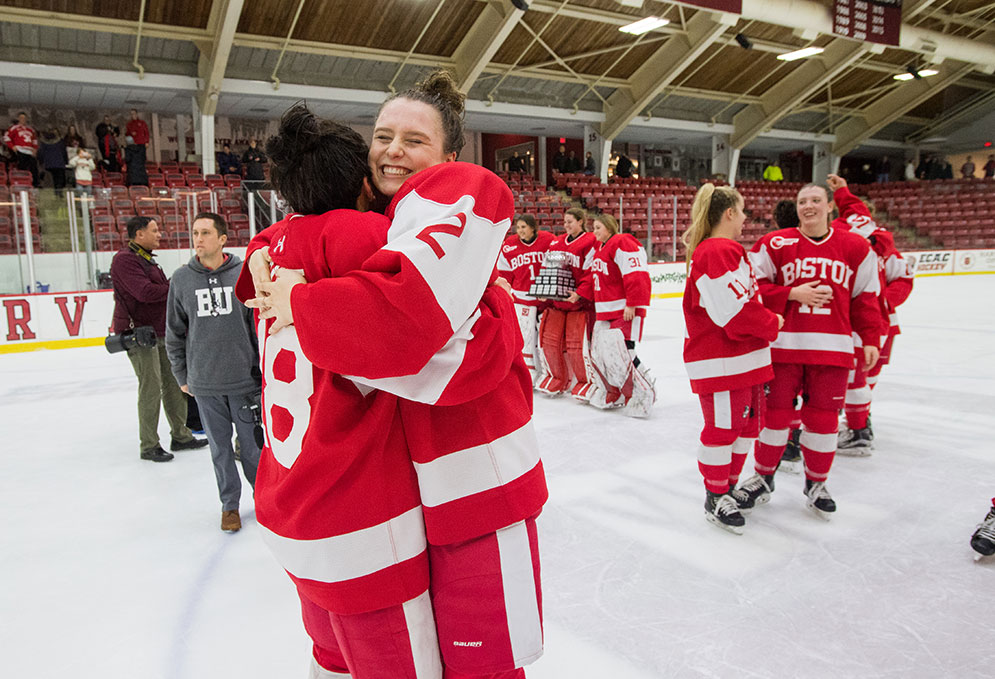 There are 5 comments on BU Women’s Hockey Beanpot Win: the Action, the Celebration, the Joy

BU Women’s Hockey Beanpot Win: the Action, the Celebration, the Joy
5
share this