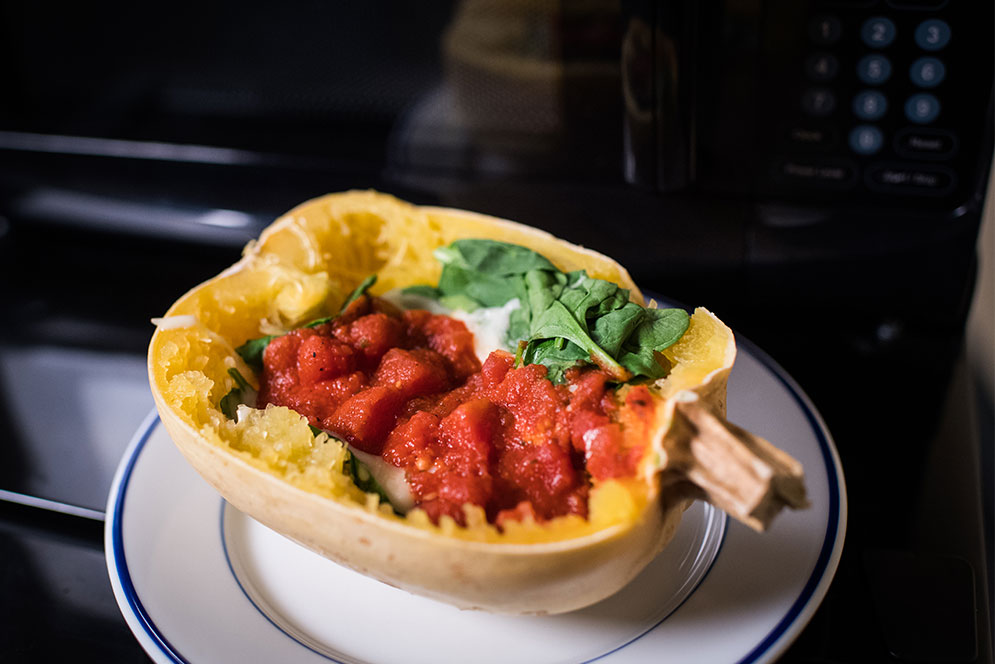 This stuffed spaghetti squash is topped with spinach, marinara sauce, and low-fat mozzarella cheese. All you need is a MicroFridge. It’s one of four recipes, with videos, you’ll find below, created by Sargent Choice Nutrition Center dietitians. Photo by Jackie Ricciardi

If you’re living in a dorm room, chances are your only kitchen appliance is a MicroFridge. It can be hard to figure out what to make besides the same old ramen noodles, canned soup, and frozen dinners. So BU Today reached out to the team of talented dietitians at Sargent Choice Nutrition Center and asked them to provide four tasty, healthy, easy-to-prepare dishes. All you need are the ingredients and that handy MicroFridge. We’ve included the recipes and four easy-to-follow videos below. You’ll find great ideas for breakfast, lunch, dinner, and even a seasonal dessert.

The veggie frittata is ideal for any meal, with the red and green bell peppers and green onions adding a pop of color and great taste. The loaded sweet potato recipe calls for Greek yogurt in place of sour cream, and the hint of cumin and sprinkle of fresh cilantro pack a ton of flavor. The spaghetti squash recipe uses the squash as the noodles and the vessel in a delightfully novel entrée: the squash is topped with spinach, marinara sauce, and low-fat mozzarella. For those with a sweet tooth, there’s a yummy apple crisp recipe. It’s the quintessential fall dessert.

Take a look. You’ll be cooking like a pro in no time.

The secret to making this veggie frittata is stirring the egg mixture every 30 seconds—that way, the vegetables don’t sink to the bottom.

This recipe adapted from PowerHungry.com.

This loaded sweet potato recipe uses Greek yogurt in place of sour cream, giving the meal a little bit of tang and richness on top.

This recipe adapted from EatingWell.com.

For this vegetarian entrée, spaghetti squash not only is the “noodles”—it’s also the vessel for the yummy filling.

This recipe adapted from Health.com.

Alan Wong can be reached at alanwong@bu.edu.

Four Healthy, Tasty Dishes You Can Make with Just a Microwave

There are 2 comments on Four Healthy, Tasty Dishes You Can Make with Just a Microwave

Four Healthy, Tasty Dishes You Can Make with Just a Microwave
2
share this