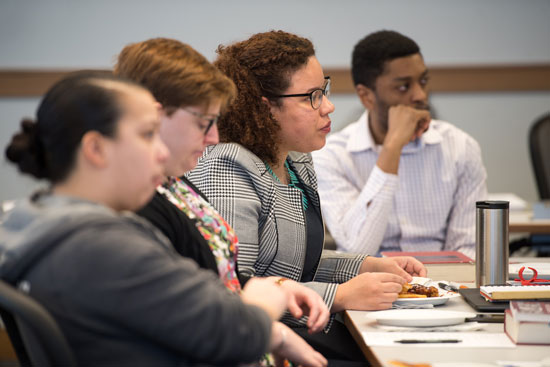 It was standing-room only for BU law students attending a March forum on etiquette sponsored by First Generation Professionals.

They packed the class until it was standing-room only, law students—many of them the first in their families to go to college and then law school—who came for a crash course on business etiquette.

Manners expert Mandie LeBeau fired off questions and answers. Where does your name tag go? (The right lapel) What color suit is acceptable? (Dark) Should you place your used dinner napkin back on the table if you excuse yourself? (No)

The event was sponsored by First Generation Professionals, a group founded by School of Law students in late 2017 offering mentoring, support, and the occasional class on the profession’s sometimes arcane rules of decorum.

Students like second-year law student Cameron Chan soaked up the advice. The Vancouver native says his parents didn’t finish high school, never mind college or law school, so he took careful notes on what to wear.

“This is exactly the kind of event that I joined the group for,” he says. “There are times when you don’t know how to associate with the people you’re associating with in the legal profession, and it can feel like a glass ceiling.”

First Generation Professionals (FGP) is about more than helping students learn which fork to use. First-gens are often at a professional disadvantage, not able to rely on family members for advice, benefit from personal connections, or simply afford the bespoke suits or pristine textbooks their peers can. It can lead to creeping self-doubt about their abilities or to feeling socially isolated, which can affect not only their ability to concentrate, but to graduate.

FGP offers programming like the etiquette workshop, as well as support and mentorship from other first-gens navigating the law school scene. It’s one part of a broader University effort to create a welcoming college environment for students of racially and economically diverse backgrounds. Last year, BU joined the American Talent Initiative (ATI), an alliance of colleges and universities with a shared commitment to improve opportunities for students from low- and moderate-income households. ATI research shows that each year more than 50,000 community college students do not transfer to four-year schools even though their grades suggest that they would thrive.

For those first-gen students who complete their undergraduate degree, law school, with its esoteric customs, can feel more foreign.

“The FGP group has been invaluable in supporting our first-generation students, providing social and educational events, fellowship, and resources to solve challenges previously unfamiliar to the group,” says Geraldine Muir, LAW associate dean of student affairs. “As the saying goes, when you want to go fast, go alone; but when you want to go far, go together.”

Many first-gens are trying to balance the demands of law school with needs at home. That was one of the reasons Miosotti Tenecora founded the group two years ago. Now in her third year at LAW, she recalls the panic she felt when her mother, a school bus monitor earning minimum wage in the Bronx, was laid off during her second year. While looking for all-important law internships, she was also considering taking time off from law school so she could work and help her mother pay the rent.

The LAW scholarship recipient ultimately liquidated a retirement savings account to help her mother instead.

“The goal when I started the group was to have a community of students who could talk openly about their struggles,” Tenecora says. “First-gen students may struggle with bills or things happening at home that other students are not necessarily going through.”

Law school, especially, can be a pressure-cooker environment, as students vie for jobs—typically, the most desirable positions go to the top third in any class. Tenecora says she knew of no other first-generation students in her class until she reached out. While seeking signatures for a petition to create the group, she found out she’d been sitting next to two fellow first-generation students in a lecture hall.

“We’re not vocal in any way, I think because there’s a stigma around poverty in general,” she says.

According to the LAW admissions office, 39 students identified themselves as first-gen last fall, about 14 percent of the class. This year, 55 law students joined the group. For many, it helps answer questions about what to expect as they vie for interviews with firms offering paid summer employment or other job opportunities. After all, these are students without the benefit of helicopter parents, who act as a sounding board for even their adult children’s professional decisions.

Brenda L. Hernandez, LAW associate director for diversity and inclusion, says that in recruiting students, she has found that because of social media, many are more aware of others’ privilege, and perhaps their own lack of advantages. There are the vacations they can’t afford or the dinner gatherings that can blow even the most careful student’s budget.

With the help of LAW administrators, FGP is also working to offer students a resource list of school alums who can act as mentors to students. “The most important thing is networking,” Hernandez says. “Unlike many of their peers, they don’t have those connections in the legal profession.”

Imran Malek is one of those students. Raised by a single mother—an Indian immigrant who prized education, but had little herself—he grew up working in a motel owned by his family in Hampton Beach, N.H. He went to a private school beginning in the eighth grade, and he says he came to understand what privilege means when visiting classmates’ homes on the coast.

Malek graduated from Worcester Polytechnic Institute, where he studied engineering and became interested in technology and the law. Accepted to LAW in 2017, he joined FGP in its inaugural year because he felt that there were professional expectations of students “that aren’t acknowledged until they don’t happen.” A missed social cue, he says, is a lost opportunity and could even mean the difference between landing a competitive internship with a desirable firm or not.

“Disadvantaged is the key word here,” says Malek, this year’s FGP president. “It’s about people who do not have these built-in advantages, whether through their upbringing or college background, and kind of need a leg up.”

FGP has sponsored several events in its two years, including a rally in support of DACA students threatened with deportation, a Q&A session with BU health staff, and an “Ask Us Anything” discussion with members of the Boston office of the law firm Latham & Watkins.

More than a dozen FGP students gathered in a LAW lecture hall recently for that discussion. They peppered three members of the firm, a senior, a mid-career, and a new lawyer, with questions about their experiences and how to make a good impression.

First-year LAW student Michaela Frai says it was exactly what she needed as she prepares for her all-important summer job interviews.

Like other first-generation students, she says, she can get psyched out learning that her roommate was a debutante with etiquette skills and a bespoke suit or knowing that another student’s mother can write a legal brief.

Frai is from Miami, and her parents, who met at a community college class for English as a second language learners, own and operate a downtown jewelry store and don’t have much need for suits. She says their awe of her accomplishments helps motivate her to become a successful lawyer, but that it can be hard seeing that many of her fellow students don’t seem to have the economic worries she does.

Now that she’s finishing her first year of law school and beginning interviews with firms, she’s relying on the friendships she has made through FGP.

“That’s one of the best parts of the group,” Frai says. “It gives people who would never know each other a chance to talk and the strength to assert a new kind of perspective.”