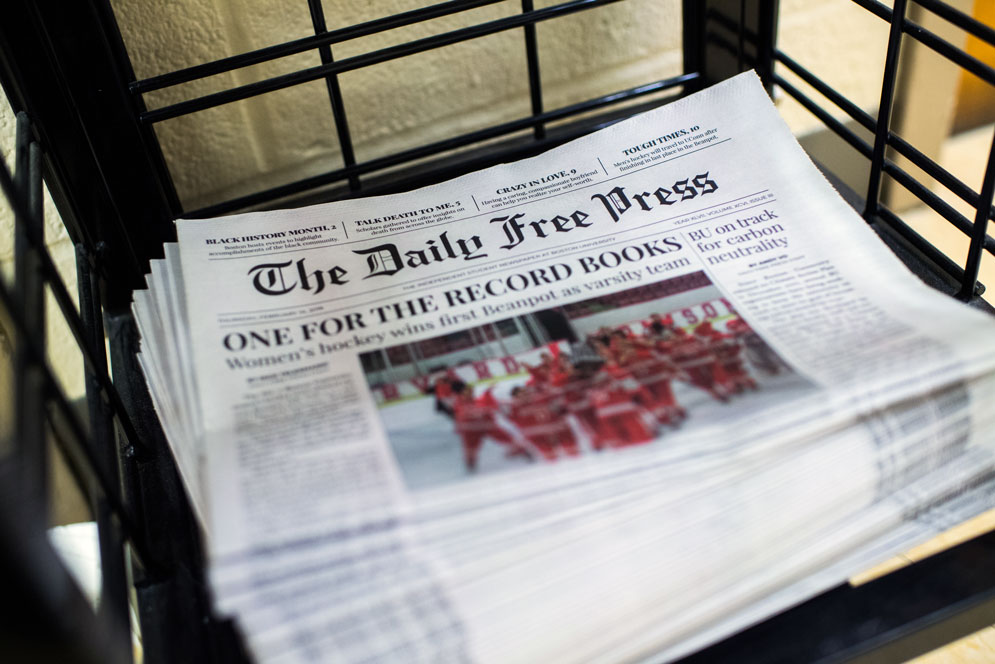 The Daily Free Press will print and distribute issues only when it has paid ads. Photo by Jackie Ricciardi

Boston’s newspapers have been under siege of late. In the city that gave birth to American journalism (Publick Occurrences Both Forreign and Domestick was published here in 1690), both the Boston Globe and the Boston Herald have undergone severe cutbacks because of dropping circulation and curtailed advertising. Some of those same market influences have also hit college newspapers, and the University’s independent student newspaper the Daily Free Press last week announced that it will no longer publish a regular weekly print edition.

Founded in 1970 by BU students, the FreeP, as it’s commonly called, will publish a print edition only when there are paid ads, according to the paper’s board of directors, citing a “changing news environment” for the decision.

“We need to think of the long-term sustainability of the paper,” says senior Lexi Peery (COM), chair of Back Bay Publishing Co., Inc., the student group responsible for the FreeP’s marketing. “Advertising is down and print costs are very expensive.”

Senior Anna Whitelaw (COM), the paper’s public relations manager, says board members began discussing a limited print schedule a year ago amidst growing financial concerns. The newspaper’s debt hit an all-time high this past summer, and although the FreeP has since raised $12,000 from donations and paid off its debt, its finances remain tenuous.

Over intersession, the paper encountered yet another business challenge: its printer, Turley Publications, announced it was ceasing operations, forcing the FreeP to find a new vendor in a matter of weeks.

“We knew that if we wanted to maintain a good relationship with our new printer, we had to be smart in our financial choices,” Peery says. So, aware of the debt that would otherwise be incurred, they chose to limit printing the paper to those weeks where there are paid ads running.

“It was a tough decision to make,” Whitelaw says, “but overall the right one for the survival of the newspaper. It was no longer financially feasible to print without guaranteed ad revenue.”

The student newspaper is completely independent of BU. It receives no funding from the University, nor does it have a relationship with the College of Communication. Financial constraints had caused the FreeP to cut back from daily to weekly print editions five years ago. February 7 marked the first time it was unable to print after it received no ads.

“It’s sad,” says senior Dave Sebastian (COM, CAS), a former campus news reporter for the paper. He says he learned the basics of journalism writing three to five stories a week. “One of the joys I had as a freshman was seeing my byline in print after a week’s hard work.”

Whitelaw also recalls how excited she was to see her first byline. “I’m disappointed that some writers will have to wait for that accomplishment,” she says.

On weeks when the paper does have paid advertising, the editors say, they will continue to print 5,000 copies and distribute them to over 20 locations across campus. They will notify readers of publication dates on social media.

The student news outlet will continue to publish a mix of features, columns, comics, blogs, and campus and city news, along with other written and visual content, on its website daily, Monday through Friday. The FreeP’s digital media presence is robust, and it recently launched a SnapChat Publisher Edition and is actively expanding its selection of podcasts covering campus life and sports.

Graduate student Geoffrey Line (COM) can be reached at gline@bu.edu.