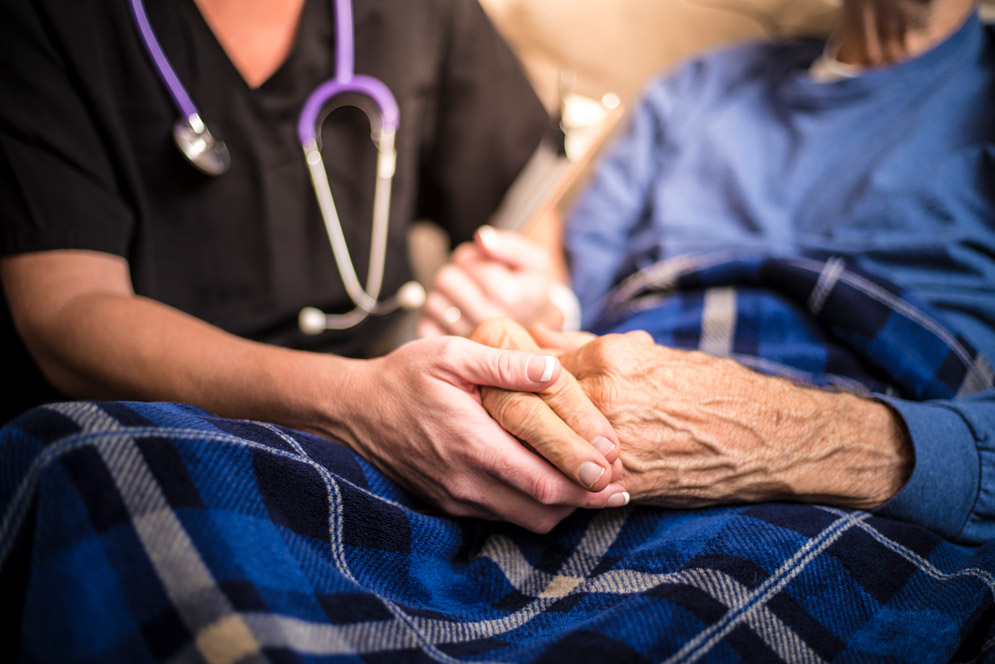 From anti-aging beauty regimens to strict diets and medical screenings, Western culture places immense value on the quality and preservation of life. Death, however, is a subject largely absent from daily conversation, and when raised, it evokes fear and anxiety.

But talking about death—and the policies and attitudes that shape it—is a healthy practice, speakers at the School of Public Health Dean’s Symposium Death and Dying: A Population Health Perspective concluded Tuesday. More than 150 people attended the daylong event, which gathered authors, scholars, professors, physicians, storytellers, and public health experts for a frank conversation about an inevitable part of being human.

“The data is clear that 100 percent of us will die,” Sandro Galea, Robert A. Knox Professor and dean of the SPH, said at the start of the program, to the amusement of the audience. “And that’s okay,” he continued. “Our goal should be to think about how we approach death and dying at the population level, so we can live the healthiest, fullest, richest lives we can until such time.”

The notion of a good death—what it constitutes and if it even exists—was a central component of the day’s conversation.

“Death and dying is an issue that is characterized by a great disconnect between the universal experience we all share witnessing the deaths of our loved ones and a reluctance to discuss honestly and publicly the policies and attitudes that have gotten in the way of ensuring the good deaths that we all no doubt seek,” said Jon Sawyer, executive director of the Pulitzer Center, which cohosted the symposium, along with BU’s College of Communication, College of Arts & Sciences Center for the Humanities, and Program for Global Health Storytelling.

Sallie Tisdale, a nurse at Providence ElderPlace, pushed back against the concept of a good death. She said the National Academy of Sciences, Engineering, and Medicine definition of a good death—one that is “free from avoidable pain and suffering and in general accord with patients’ and families’ wishes”—is a fantasy.

“Death is a solitary experience,” Tisdale said. “How can we as a group decide what avoidable distress and suffering is? Only the person in the deathbed knows what that means.” Instead, there is such a thing as a “mastered death,” she said, where people are able to “express themselves as long as possible.”

Many of the speakers’ analyses were informed by personal experience. Michael Hebb, author and founder of the Death Over Dinner movement, described how his initiative was born from a communication breakdown within his family after the death of his father. Hebb was 13, and his family members, unable to talk about the devastating loss, ate meals alone and mourned in silence.

But repression creates the perfect environment for disease, he said, while talking about death “makes you funnier, improves intimate relationships, and increases your capacity to love.”

Jamila Michener, a Cornell University assistant professor of government, recounted how her mother’s battle with stage 3 pancreatic cancer was initially misdiagnosed as acid reflux years prior by doctors in her low-income Queens neighborhood. The cancer wasn’t discovered until she saw a doctor in a predominantly white neighborhood in Ithaca. (Michener’s mother survived the cancer and is still living.)

“My brother jokes that she lived because she fled where black people were,” Michener said. “The experience of dying wasn’t something she wanted to do in her own neighborhood.”

Other speakers explored ways that people can exercise some control over their own dying.

“Spirituality is a primary strategy for integrating death into the human identity,” said Tracy Balboni, a Harvard Medical School associate professor of radiation oncology. Citing oncology studies conducted at four academic centers in Boston, Balboni explained that 78 percent of participating cancer patients said that religion was an important factor in dealing with their illness and that it provided coping skills and a way to understand their illness and their life.

“We need a creative reintegration of spirituality into medicine in order to care for dying patients well,” she said.

Another speaker, journalist Christopher de Bellaigue, discussed the practice of physician-assisted death in the Netherlands, dubbed the “euthanasia capital of the world.” The practice is now widely supported therecafter it was legalized in 2002 for patients experiencing “unbearable suffering with no prospect of improvement.”

De Ballaigue noted that the majority of the Dutch population opposed euthanasia when it was first enacted into law: “What interests me is where legislation leads to a change in dynamic in character and narrative, or the other way around. Public attitudes follow legislation.”

George Annas, a William Fairfield Warren Distinguished Professor and an SPH professor of health law, ethics, and human rights, challenged the American cultural approach that humans have to do everything they can to live as long as possible.

“Avoiding death is the goal of modern medicine,” said Annas, director of the Center for Health Law, Ethics & Human Rights, arguing that people should instead consider prioritizing quality of life over quantity of years lived. He suggested that it would be valuable to shift a portion of research funding into “things that make life worth living, such as decent housing and public transportation.

“There is such a thing as dying healthy, and it can be a worthy public health goal,” Annas noted.

Author Barbara Ehrenreich (Nickel and Dimed: On (Not) Getting By in America and Natural Causes: An Epidemic of Wellness, the Certainty of Dying, and Killing Ourselves to Live Longer) was scheduled to be a panelist, but was unable to attend. Sharon Begley, senior science writer at the Boston Globe publication STAT, a morning session moderator, read a portion of Ehrenreich’s prepared statement to the audience: “I’m 77 years old and I love cheeseburgers and Popeye’s Fried Chicken. I exercise when I feel like it, and I refuse to submit to medical tests and screenings recommended to all people over 50.”

This approach to her health, she explained, makes her an “outlier in our culture…where death is seen as some kind of failure.”

Panelists also discussed dealing with grief after a loved one dies, and the lack of resources available to properly treat mourning family members and friends. Katherine Keyes, a Columbia University Mailman School of Public Health associate professor of epidemiology and codirector of its Psychiatric Epidemiology Training Program, detailed how unexpected loss can lead to symptoms such as depression and to post-traumatic stress disorder.

“There’s something very specific to the loss experience itself,” said Keyes, who lost her ex-husband to suicide. “Losing someone close to us is very destabilizing.”

“There is no reason in our country for us to continue the legacy of shame and stigma that surrounds grief,” Gray said.

Changing the National Conversation around Death