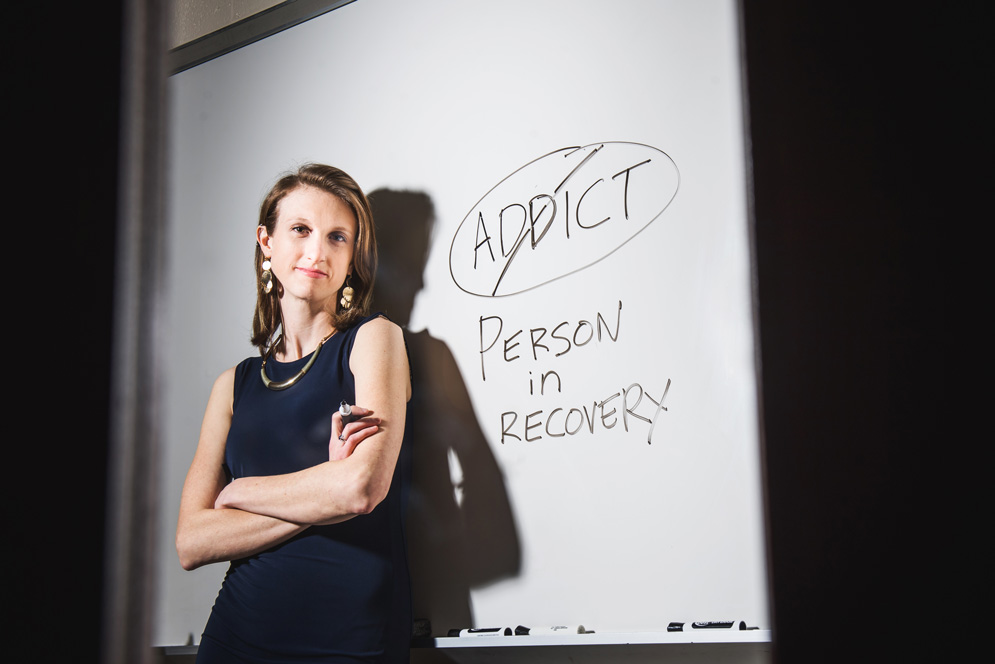 School of Social Work graduate student Jessica Lareau is on a mission to get SSW to adopt nonstigmatizing language around addiction—and faculty, administrators, and students are on board. Photo by Jackie Ricciardi

Jessica Lareau used to drink too much. She tried to stop many times, but was unable to on her own. Finally, she sought help. And she has not had a drink in four years. But do not call her an alcoholic. “I’m a person in long-term recovery,” says Lareau, a 28-year-old graduate student in the School of Social Work.

That distinction is significant to her.

She doesn’t believe anyone should be labeled as an alcoholic—or a drug abuser or an addict, for that matter. “That’s stigmatizing language,” says Lareau, who is studying to be a licensed clinical social worker (LICSW) and a licensed alcohol and drug counselor (LADC), “and it reinforces the view that it’s a moral failing and not a disease for which people need treatment.”

People being the crucial word. Label Jessica Lareau an alcoholic and you erase all the other things that define her as a young woman—a BU straight A student from Connecticut, a violinist, a swing dancer, a backpacker, a fly fisherwoman, and a former Peace Corps volunteer in Ethiopia.

Now, Lareau is on a new mission. This semester she launched a campaign—Support Recovery Initiative—to get SSW faculty, staff, and students to replace that stigmatizing language, in teaching, in conversations, in course curricula, and in field placements, with terms that put the person first, not the illness—as in person in recovery or person with a substance use disorder.

The reception has been overwhelmingly positive. “Language is a social construct,” says Jorge Delva, dean of SSW. “As the context changes, new words come in or old words become obsolete and some words become inappropriate. We’re taking Jessica’s work around substance use disorder as an opportunity to make nonstigmatizing language in all areas a more salient conversation at the school.”

Lareau would like to make it a University-wide conversation. She’s met with addiction expert Richard Saitz (CAS’87, MED’87), a School of Public Health professor of community health sciences and a School of Medicine professor of medicine, to enlist his help. Saitz has spoken publicly about the importance of using nonstigmatizing language.

Lareau is bringing to SSW a movement that has been gaining momentum among health policy experts, addiction researchers, and healthcare professionals who work with people with substance use disorders. Not referring to a person as an alcoholic or a drug abuser is not about political correctness, they say, but about being scientifically accurate and describing substance use disorder as a disease of the brain—and as in any physical illness, without judgment.

More important, say experts at Boston Medical Center (BMC) and its Grayken Center for Addiction, which have been leaders in this movement, the use of nonstigmatizing language may significantly encourage more people to seek treatment. Studies show that healthcare professionals and the treatment decisions they make are influenced by how addiction is talked about.

Even journalists who chronicle the nation’s opioid epidemic are making efforts to change their language. In 2017, the influential Associated Press Stylebook declared that journalists should no longer use the word addict as a noun. Instead, they should “choose phrasing like he was addicted, or people with heroin addiction,” the revised stylebook says.

The New York Times is also grappling with the issue, but has not yet made similar institutional changes. “We’re aware of the movement among many experts and others to avoid the word addict as stigmatizing,” Philip Corbett, the paper’s associate managing editor for standards, wrote in an email. But he also said that since the word is so commonly used and familiar and the alternatives can be awkward, any change is complicated.

“Times journalists are already using a range of descriptions,” Corbett wrote, and many avoid “addict” when possible.

On a frigid morning in February, she stood in front of her teacher, Ashley Davis, an SSW clinical associate professor, and classmates in the course Social Work Research 1. “I’m a person in long-term recovery,” she began. “I spent a really long time calling myself an alcoholic because that’s what AA taught me to do.”

It’s okay for people in AA to use that term, she said, and she herself didn’t give it much thought until last semester, when she enrolled in a class on addictions taught by substance use disorder treatment expert Eric Devine, a School of Medicine assistant professor of psychiatry. Devine talked about the harm inflicted by stigmatizing language around addiction. He directed students to research indicating that doctorate-level mental health and substance use disorder clinicians were significantly more likely to assign blame when a person was described as a substance abuser rather than a person with a substance use disorder.

Devine told the class about the Words Matter pledge, which has been a core part of the mission of BMC and the Grayken Center for Addiction since 2017, when Michael Botticelli, who is in long-term recovery from a substance use disorder, became Grayken’s executive director. The pledge is modeled after guidelines Botticelli helped introduce for federal agencies when he led the Office of National Drug Control Policy under President Obama. The pledge asks all hospital personnel to “use clinically appropriate and medically accurate terminology that recognizes substance use disorder as a chronic illness from which people can and do recover, not a moral failing.”

“I thought that was really inspiring, and why couldn’t we do something like that at BU,” Lareau told her classmates that February morning. She has begun a similar conversation at McLean Hospital’s adult drug and alcohol treatment program, where she is a graduate intern.

There are nearly 21 million people in the United States with a substance use disorder and only about 10 percent of them get treatment. People cite stigma as the number one reason why more don’t seek help. Lareau said that it’s why she delayed getting help from Alcoholics Anonymous.

“I didn’t want to be an alcoholic,” she said. “I said to myself, ‘I drink a lot, but I know people who drink more than me so I can’t be an alcoholic, especially if they aren’t.’ It’s a spectrum, and people need to see it that way. That’s probably the reason why so few college kids get help, despite so many drinking at unhealthy rates. They have an idea of what an alcoholic is, and it is not a 23-year-old college student with high grades, great relationships, great work ethic, and a promising future.”

After she finished speaking, she passed around the Words Matter pledge and a separate Support Recovery Initiative pledge, which asks students to commit to changing their own language. Davis, and her fellow students, gave her a round of applause.

Two students raised their hands to thank her and volunteer that they, too, were in recovery and had internalized the stigma brought on, at least in part, by language.

Davis sits on the SSW curriculum committee, which heard Lareau’s pitch last month asking the department to change its language. “There was unanimous support among the faculty,” Davis says. “There was no pushback. If anything, it was, look at what our students are doing—we need to catch up.”

The BU Collegiate Recovery Program connects students in recovery from substance use and provides a support network for wellness and long-term recovery. BU students in recovery can email recovery@bu.edu to learn more. If you are a BU student questioning your substance use, Behavioral Medicine offers free, confidential counseling and is available 24/7 for emergencies. Call 617-353-3569 for a fast and free appointment.

Don’t Call Jessica Lareau an Alcoholic. To Her, Words Matter

There are 31 comments on Don’t Call Jessica Lareau an Alcoholic. To Her, Words Matter

Don’t Call Jessica Lareau an Alcoholic. To Her, Words Matter
31
share this