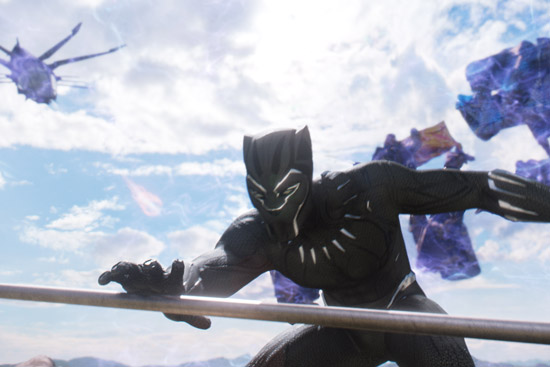 The success of the 2018 movie Black Panther, with its black superheroes and sci-fi twists, marked the emergence of Afrofuturism into the mainstream. Photo courtesy of Marvel Studios

Afrofuturism steps into the spotlight at BU on Thursday, in the wake of the successes of Black Panther and Jordan Peele (Get Out).

The term “Afrofuturism” was coined by critic Mark Dery in 1993 to describe the use in African American culture of science fiction tropes to explore the condition of black people in the world—and to imagine the destinies they could shape for themselves.

“So much of black cultural production and thinking and politics is rooted in the traumas of the past,” says Louis Chude-Sokei, a College of Arts & Sciences professor of English, the George and Joyce Wein Chair in African American Studies, and director of the African American Studies Program. “Afrofuturism has allowed people to reimagine that past through the lens of possibility and the future.”

The African American Studies Program presents Afrofuturism & Black Speculative Arts: Expo and Symposium, on Thursday, April 18, from noon to 6 pm, at the Photonics Center. The event, free and open to the public, is cosponsored by the BU Arts Initiative.

Long before there was a word for it, African American artists created sci-fi and fantasy tales through the lens of the African diaspora, finding new freedoms and dangers in imagined futures, from the early science fiction of authors Samuel R. Delany and Octavia Butler to the astro-jazz of Sun Ra (Space Is the Place).

“Someone said science fiction writers capture the estrangement that black Americans live,” says Reynaldo Anderson, executive director and cofounder of the Black Speculative Arts Movement (BSAM), who will speak at the event. Consider, he says, the transatlantic slave trade as a form of alien abduction. “Using that type of genre to examine history has been a useful tool.”

Genre fiction also can fly under the radar while examining issues that would have been inflammatory if confronted directly. “Maybe the FBI wouldn’t come knocking at your door if you did it as a tall tale,” Anderson says.

And now, with Black Panther, actor, comedian, and filmmaker Peele’s horror flicks Get Out and Us, and the android feminist funk of Janelle Monáe, the genre seems to be moving into the mainstream. But putting a person of color in the spandex hero suit is only part of it.

As writer Jamie Broadnax put it in the Huffington Post, “A narrative that simply features a black character in a futuristic world is not enough. To be Afrofuturism, it must be rooted in and unapologetically celebrate the uniqueness and innovation of black culture.”

That means that mainstreaming can have its perils. “There is in fact a growing tension between those who have long been engaged in what’s now called Afrofuturism and those who are new to it due to its increasing cultural visibility,” Chude-Sokei says. “For the early adopters of Afrofuturism, there has been a stronger political and cultural content, where for many of the newcomers, it becomes hard to see beyond style and fashion.” That’s less a problem than it might seem, though, he says, because it’s simply how movements and cultural phenomena work. 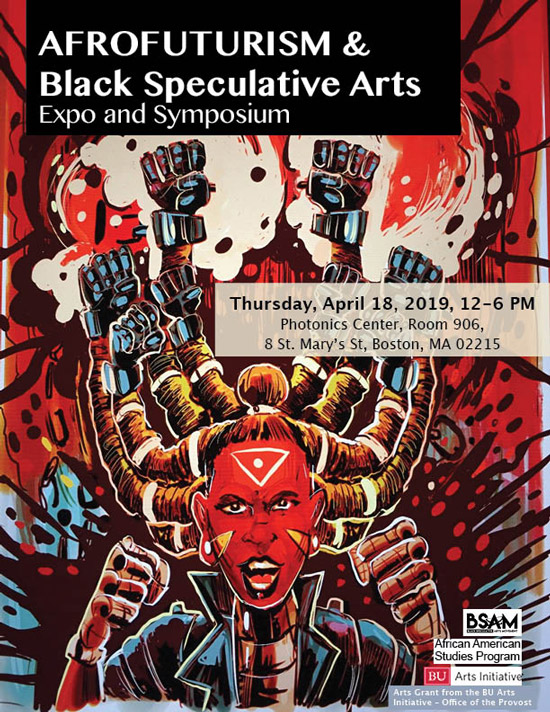 Thursday’s event will offer a modest cross-section of the movement, including representatives of Boston’s Comics in Color collective, filmmaker David Kirkman, who’ll screen his short film Static, several authors, and some merchandise tables. Don’t be surprised to see a few Black Panther cosplayers, too, Chude-Sokei says.

BSAM is currently the largest Afrofuturist organization, with satellites in Africa, Europe, and the United States. But it also deals with a variety of adjacent disciplines, from digital humanities to comics, says director Anderson, a Harris-Stowe State University associate professor of communication and humanities department chair.

“We refer to it as Afrofuturism 2.0 because this is the second wave, different from the earlier connotation, which focused on the digital divide for African Americans,” Anderson says. And as smartphones have greatly narrowed that divide, he says, 2.0 is more global, while social media and climate change know no borders.

Anderson, too, wonders whether mainstreaming in the wake of Black Panther could be a double-edged sword. “I suppose some people will try to co-opt it,” he says. “Everything is co-optable, but people who actually read and do scholarship will know what that is. That’s just a side effect of capitalism, I suppose.”

But Black Panther is itself a product of Hollywood capitalism, he says with a chuckle, and thus hardly perfect. “A CIA guy is the hero in Africa? We had a good laugh about that. They had to find one white person who was a hero to get the film made, probably. But you don’t want the perfect to be the enemy of the good.”

The conference is the third one centered on new-generation ideas about race and diversity and sexuality that Chude-Sokei has organized for the African American Studies Program. It’s his effort to rebrand the program as cutting-edge, and he says it’s been a boon for student interest.

The idea of this week’s event is “to introduce people to Afrofuturism not just as this cool thing that’s done in pop culture,” he says, “but how it actually can work in redesigning our futures.”

The African American Studies Program presents Afrofuturism & Black Speculative Arts: Expo and Symposium on Thursday, April 18, from noon to 6 pm, at the Photonics Center, Room 906, 8 St. Mary’s St. The event is free and open to the public; tickets are available here. The event is cosponsored by the BU Arts Initiative and funded in part by an Arts Grant from the BU Arts Initiative—Office of the Provost.

Afrofuturism in the Age of Black Panther

Afrofuturism in the Age of Black Panther
0
share this