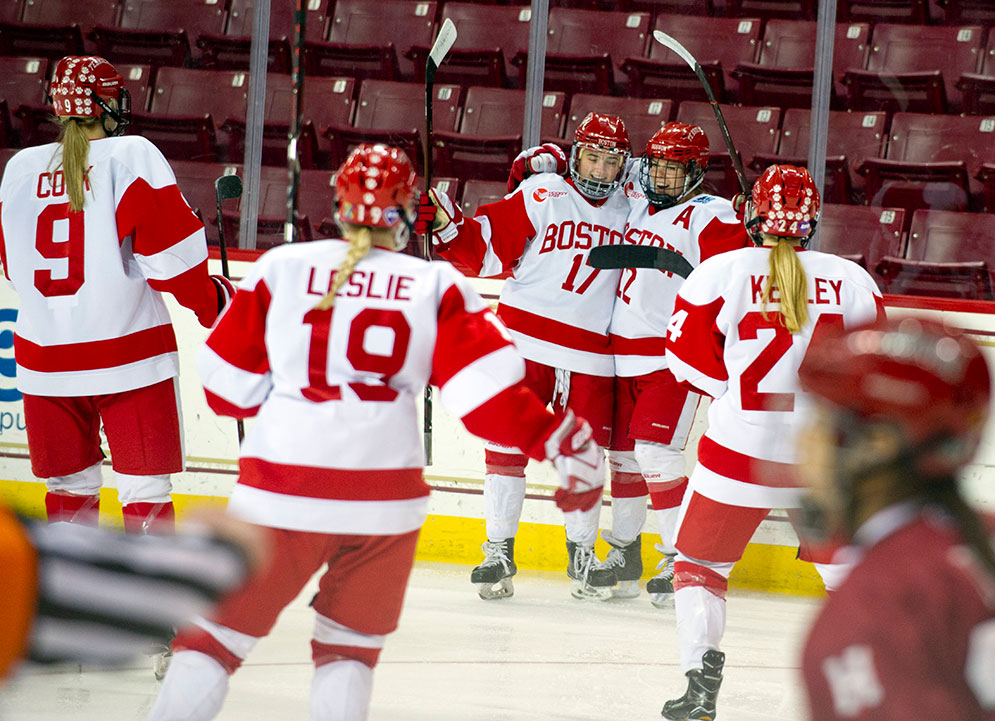 The women’s hockey Terriers scored the first three points in last night’s 40th Women’s Beanpot Tournament opening game against Harvard, but the rest of the night at Conte Forum looked nothing like a blowout. After three nerve-racking periods, the Terriers came out on top, 3-2, to advance to the championship game, where they will face number three Boston College, winner of the night’s other semifinal.

“It was an exciting game all the way to the end,” BU head coach Brian Durocher (SED’78) said at last night’s postgame press conference. “It started crazy for us with the three goals and a couple of other good chances probably in there, and Harvard obviously stayed resilient and responded.”

The opening minutes of the match were all about Victoria Bach (CGS’16, COM’18). Less than four minutes into the game, Bach swindled Harvard defenseman Ali Peper with a series of moves before scoring the evening’s first goal. Just two minutes later, she cleaned up the efforts of team captain Rebecca Leslie (Questrom’18) and Mary Grace Kelley (CAS’19) to quickly put the Terriers up two. Bach entered the game with 97 career goals—she now stands a goal shy of becoming the first skater in program history to score 100 career goals. 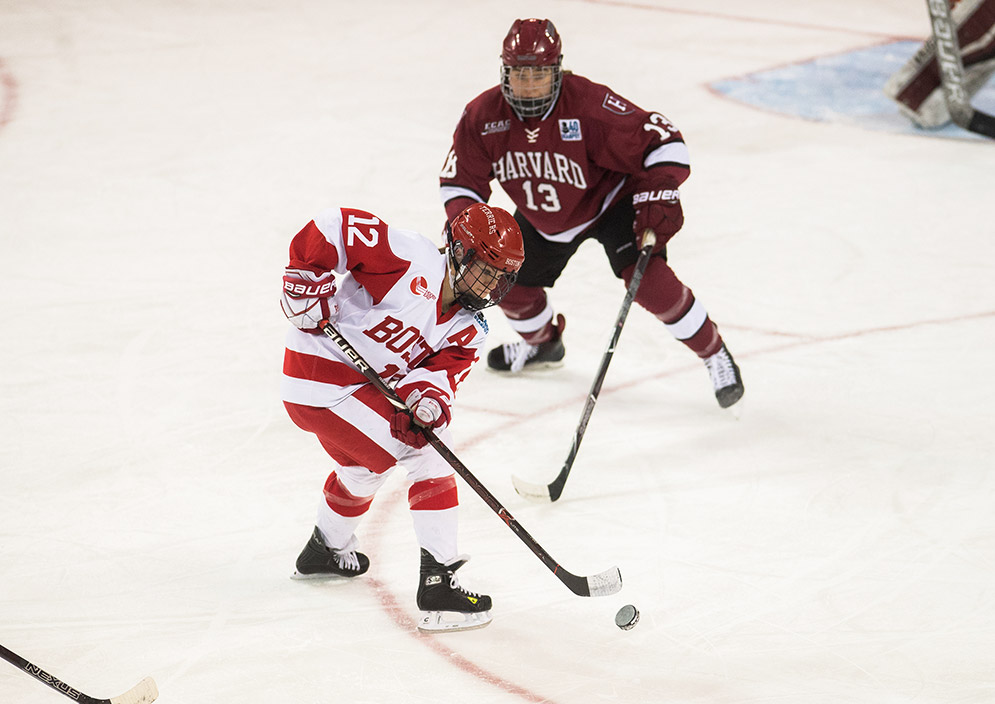 Victoria Bach (CGS’16, COM’18) scored the first two goals for the Terriers in last night’s semifinal against Harvard and is now one shy of her 100th career goal. Photo by Jackie Ricciardi

Harvard wasn’t ready to quit. A series of attempts brought the puck near the net to threaten the Terriers, and later in the period, Peper’s shot led to a rebound goal by Harvard freshman Brooke Jovanovich to give the Crimson their first score.

In the second period, Harvard brought the game to a one-point deficit. Kat Hughes found teammate Chelsea Ziadie, who wound back her stick and fired a bullet from near the neutral zone against the shorthanded Terriers.

BU nearly responded in the closing minutes of the period when forward Deziray De Sousa (CGS’18) found Compher near the net. With an unsecured puck hanging on ice, Nara Elia (CGS’19) attempted to swing, but Harvard goaltender Beth Larcom’s hands reached the puck seconds before Elia could.

The final frame began as a standoff, with both teams having opportunities, but never quite executing, and the Crimson attacking viciously in the closing minutes.

“I commend them because they kept coming in the end,” Durocher said. “We had to get good saves, a couple of blocks, and superior court clears to survive.”

Harvard’s Haley Mullins and Sydney Sorkin found opportunities near the Terrier net before Jovanovich made a diving strike. But at the end of the scramble, BU survived the threat as goaltender Corinne Schroeder (Sargent’21) saved them all. Harvard went on a full assault in the final minute, with even Larcom leaving her net to attack, but the game finished with a goal-less third period. 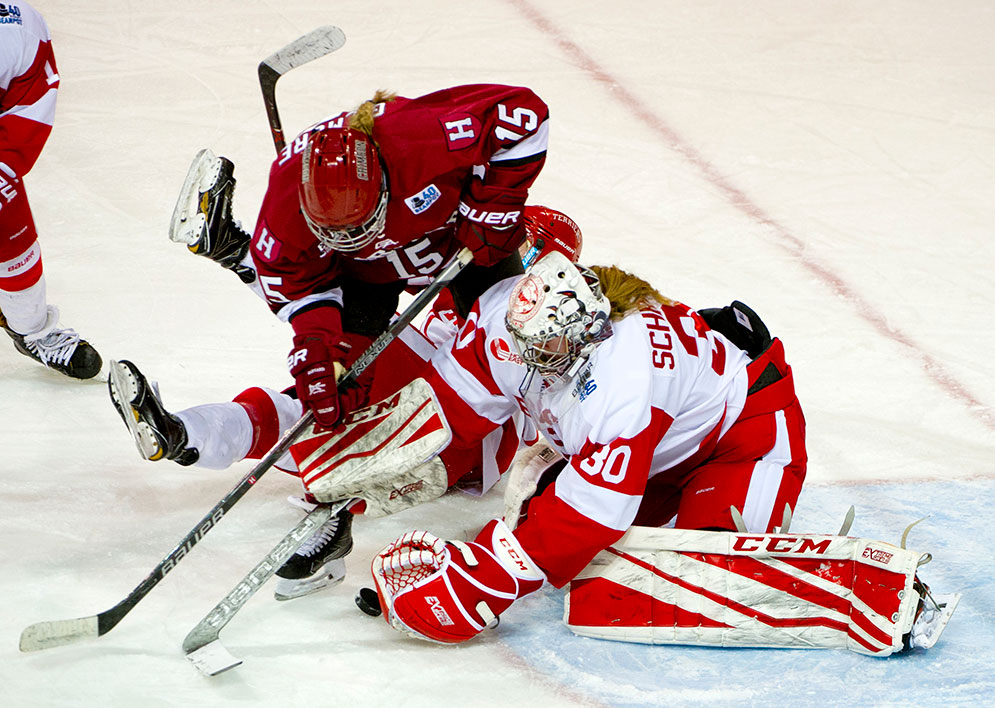 The Terriers return to the ice next Tuesday against the Eagles looking for their first Beanpot championship since 1981, when they were still a club team, and hoping to end a 37-year drought. They’ll be facing a national championship contender in Boston College, 5-2 winner of the evening’s later game with Northeastern. BC will be aiming for a Beanpot three-peat.

The Terriers last beat the Eagles in the Beanpot a decade ago, and with two losses and a tie against them this season, BU will be the underdog in the championship game.

The Terriers’ first Beanpot trophy as a varsity team “would definitely be such an honor,” says Leslie. “Playing in this program, I’ve seen some great players come through here, and we haven’t had our luck in the past few years. We’re really working hard to achieve that goal.

“Anything can happen in the Beanpot.”

The 40th Annual Women’s Beanpot: The BU women’s ice hockey team will play Boston College in the championship game next Tuesday, February 13, at 7:30 pm, preceded by the consolation game between Harvard and Northeastern at 4:30 pm. Both will be played at BC’s Conte Forum, 140 Commonwealth Ave., Chestnut Hill. Tickets are $10 for adults, $5 for children 12 and under and groups of 10 or more. Purchase tickets at bceagles.com.