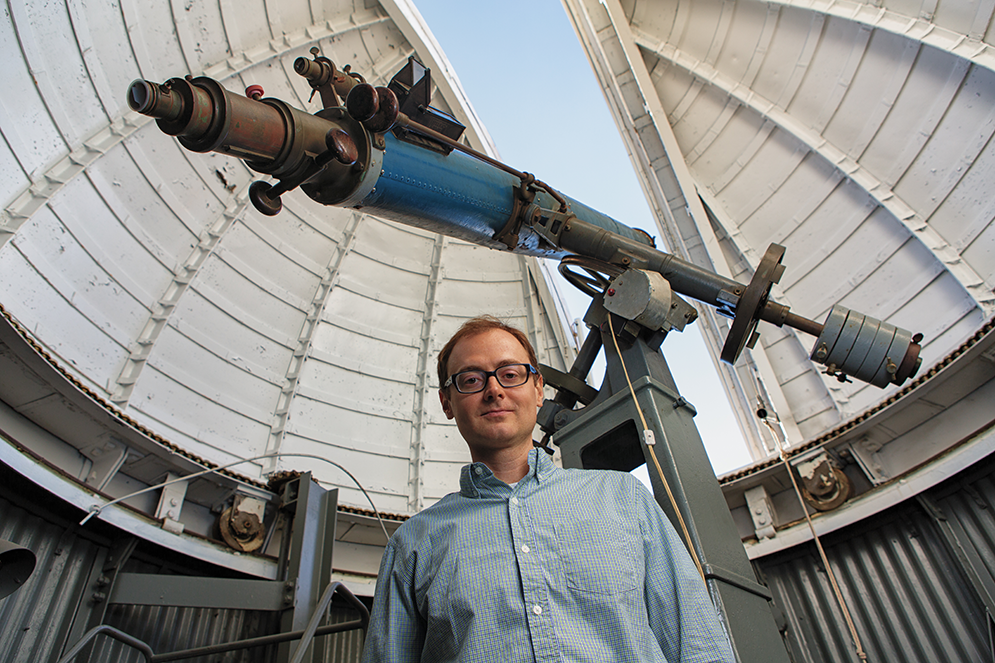 BU assistant professor of astronomy Phil Muirhead. Muirhead and his team assembled a catalog of red dwarf stars; the TESS spacecraft will study these stars—in particular, 70,000 of them—in the search for exoplanets. Photo by Michael D. Spencer

Planet hunters will soon get a new tool in their quest for planets like Earth: a space telescope called TESS (Transiting Exoplanet Survey Satellite), set to launch from Cape Canaveral on or after April 16, 2018. Over the course of its two-year mission, TESS will scan almost the entire sky, using four cameras to snap images of more than 200,000 stars. Astronomers anticipate that it will discover dozens of Earth-size planets. It will be the first time that astronomers have searched for planets over such a wide swath of sky, and the first time a space mission has explicitly targeted nearby examples of a small, cool class of stars called red dwarfs.

Red dwarf stars are much cooler and fainter than the sun; the sun is ten times brighter than even the brightest red dwarfs (which are actually almost yellow), and about ten thousand times brighter than the dimmest, ruby-red ones. Gaze up at the stars without binoculars or a telescope, and you won’t see a single red dwarf—they are that faint. Yet red dwarfs are actually the galactic norm, making up about 70% of all stars, says Philip Muirhead, BU assistant professor of astronomy.

Muirhead is something of a red dwarf aficionado. He specializes in pinning down the true mass, size, and age of these faint stars. So, soon after TESS got the go-ahead from NASA, mission scientists reached out to Muirhead and his team for help assembling a list of red dwarfs to target with the new spacecraft. The TESS scientists wanted to take aim at as many as 50,000 nearby red dwarfs. But, among all the rich star catalogs that modern astronomy has produced, there was no index of local cool dwarf stars, which are so faint that they often get overlooked.

Red dwarfs have also traditionally been disregarded in the search for planets around other stars, which has favored stars similar to our sun. But that’s changing, largely thanks to the landslide of planet discoveries (latest count: 2,649) from NASA’s nine-year-old Kepler space telescope. Kepler surprised astronomers by turning up plenty of planets around red dwarfs, especially the Earth-size, rocky planets that astronomers think are likeliest to be habitable. Kepler also overturned the presumption that our solar system should be the galactic norm.

“At first, we went after Earth-like planets around solar-type stars because that’s what we know—that was our solar system,” says Julie Skinner, a BU postdoctoral researcher who also studies red dwarfs. “There’s definitely been an evolution of thinking about planetary systems.”

Red dwarfs are also appealing targets for TESS’ particular way of searching, which involves staring at a star field for 30 days and looking for tiny dips in stellar brightness caused by passing planets. “For the same-size planet, if the star is smaller, you’re going to see a larger decrease in brightness,” says BU PhD student Mark Veyette (GRS’19), who works with Muirhead and who helped test TESS’ cameras at MIT. “It’s easier to pick out these smaller planets around smaller stars.”

Another point for the red dwarfs: because they are so cool, planets can sidle up close without getting burned. That dovetails well with TESS’ innate advantage at finding planets in very tight orbits. Around stars like our sun, these worlds would be scorched wastelands. But around cool red dwarfs, they could be (big “could” here) just right for life to arise and thrive.

So, Muirhead and his team began scouring star catalogs and plucking out anything cool and red. Because they also wanted to be sure their selections were relatively close to Earth, they focused their efforts on a 2.8-million-star catalog called SUPERBLINK, created by Georgia State University astronomer Sébastien Lépine, which lists stars that appear to move quickly across the sky.

Brisk motion is a proxy for proximity to Earth. “I always thought about this as a kid when I was on a road trip,” explains Muirhead. “You look out the window and you notice that the mountains don’t move very quickly, but the signposts and the horses and the cows on the side of the road do,” he says. “The exact same thing is happening with stars.”

Planet-hunters prefer nearby stars because it is easier to spot planets around them, and also because they give astronomers a better chance to follow up later. A distance reckoning is also essential to verifying that a red star really is a red dwarf. “The most challenging aspect of developing this catalog is being sure that the star is a small cool star and not a red giant,” a puffed-up, past-its-prime supermassive star, says Muirhead.

Muirhead and his team ultimately amassed about one million red dwarfs for their new catalog. Of those million stars, TESS scientists picked about 70,000 for special attention. Along with 130,000 bigger, hotter stars, these will receive fine-grained observations, meaning that TESS will record their brightness every two minutes instead of every half hour, which is the standard treatment.

“When you have the size of the planet and you have the mass—when you have both—you can look at the density,” says Muirhead. That is the key to answer the big question: Is the planet habitable? “You can look at what it’s made of. You can calculate the surface gravity: Is the gravity like our gravity?” Too little gravity, says Muirhead, and atmospheric oxygen might drift away into space; too much, and it might rain down to the ground.

The next, more difficult, step is figuring out the composition of the planet’s atmosphere and checking for biosignatures, molecules that are giveaways for life. That’s beyond the capabilities of today’s telescope fleet, but not for long. “It is conceivable from some calculations that we could search for biosignatures with the James Webb Telescope,” set to launch around 2020, says Muirhead. “The goal is to search for life within our generation. Not next century, but now.”