There’s snow in the air, finals are nearly over, and the city’s aglow in holiday lights—all of which means it’s time for our annual photo gallery featuring members of the BU community decked out in their ugly holiday sweaters. Nearly two dozen students, faculty, and staff volunteered this year. Some wore hand-made sweaters, others received theirs as a gift, and many found inspiration online, at discount stores, and at thrift shops like Goodwill.

And now, the moment you’ve all been waiting for: the winners of our third annual Ugly Holiday Sweater Contest. As you’ll discover, this year’s winners share a theme: the top three contestants are all wearing holiday sweaters with a feline motif (there were no dogs among our judges).

Again, our thanks to all who took part. 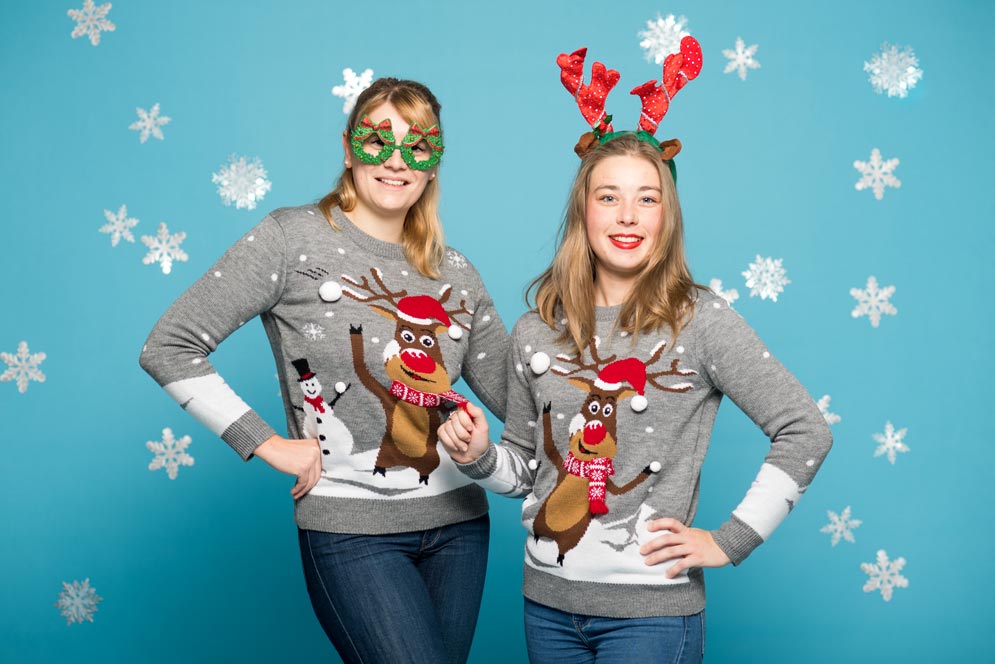 Solene Hervouet (MET’19) (left) and Lea Thomas (MET’19) are from France, which they say is not as festive as the United States during the holidays. They bought their matching sweaters on Black Friday on a shopping trip to downtown Boston. Each, unbeknownst to the other, picked the same sweater. “There are no words to describe our passion for reindeer,” the two say. They’re especially proud of the accessories they bought to set off their holiday apparel. 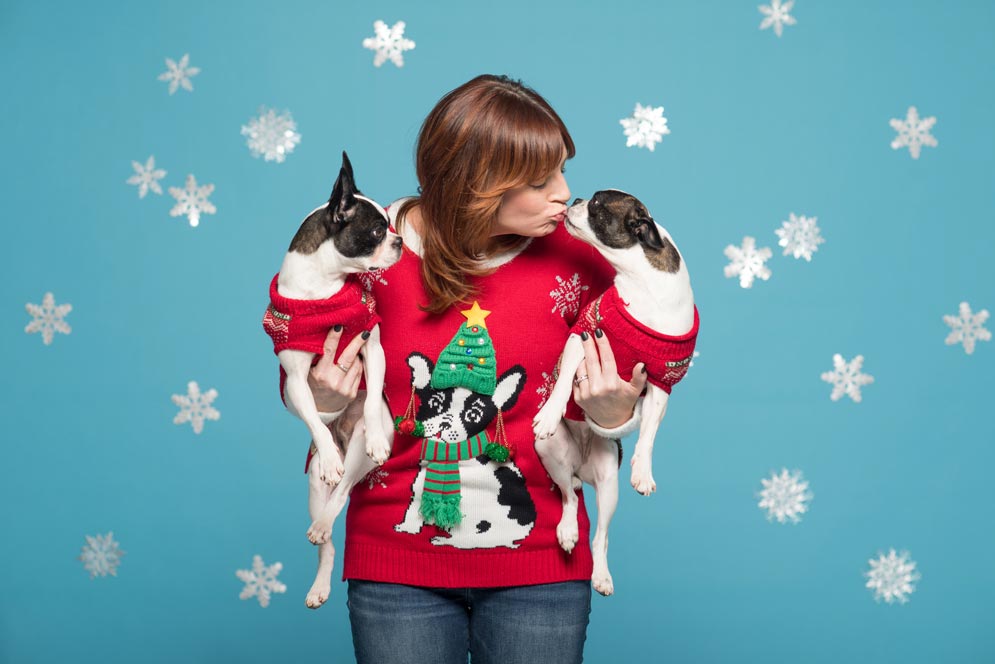 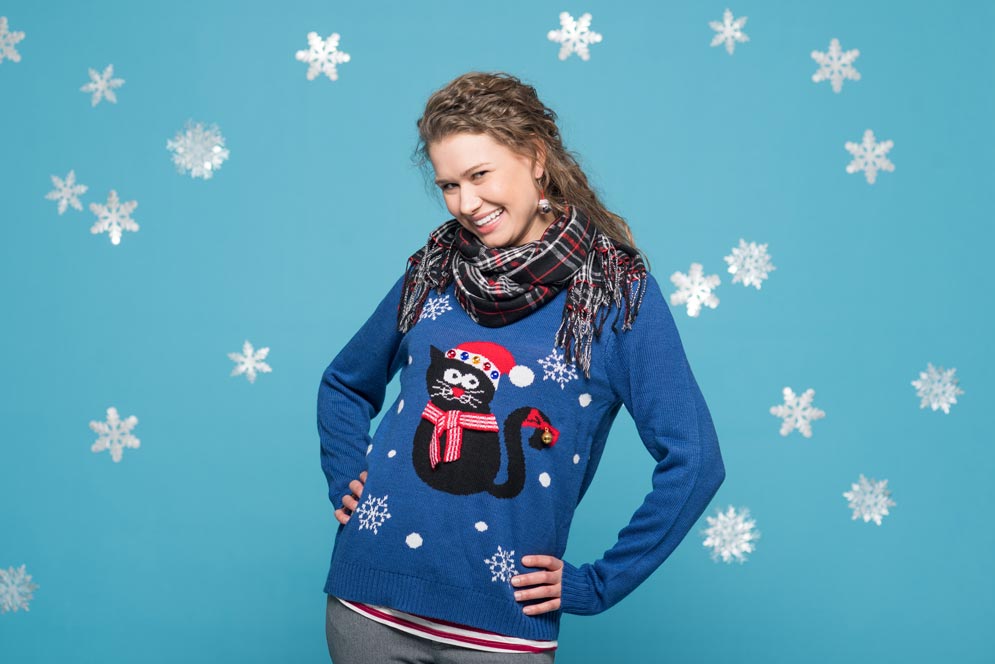 Maureen Desmond, Wheelock College of Education & Human Development senior student services coordinator, confesses that she doesn’t own an ugly sweater and borrowed this one from colleague Liz Vassallo (another contestant), who convinced her to enter the BU Today contest. “Cat sweaters are all the rage in Liz’s family,” says Desmond. “It was purr-fectly free for me. Thanks, Liz.” 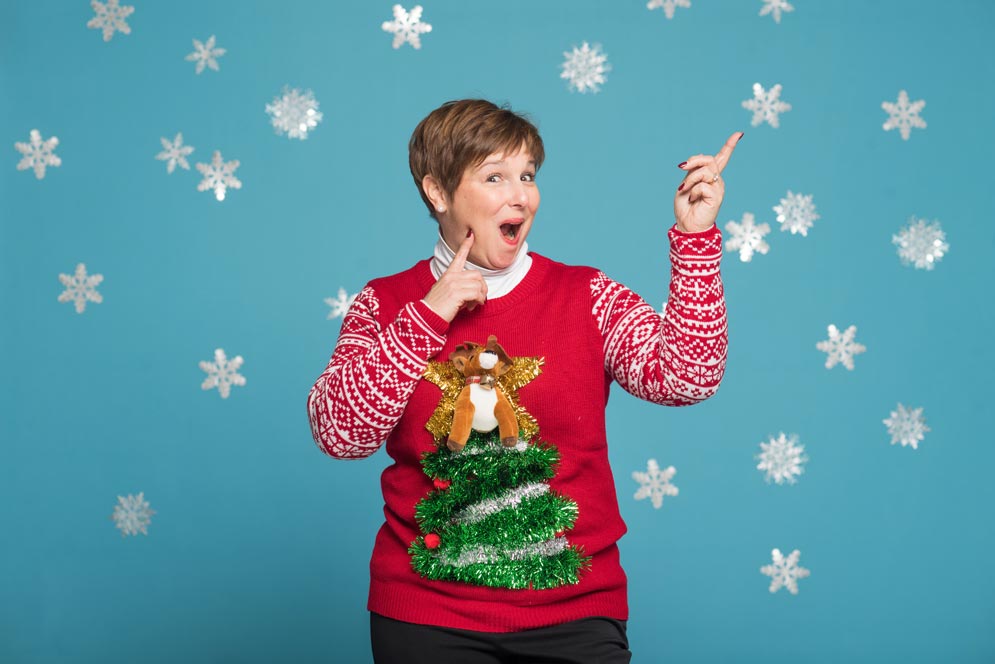 Paula Maxwell, School of Hospitality Administration assistant to the dean and operations manager, bought her appliqued reindeer and Christmas tree sweater at Walmart. “I paid a whopping $19.99” for it, she says. 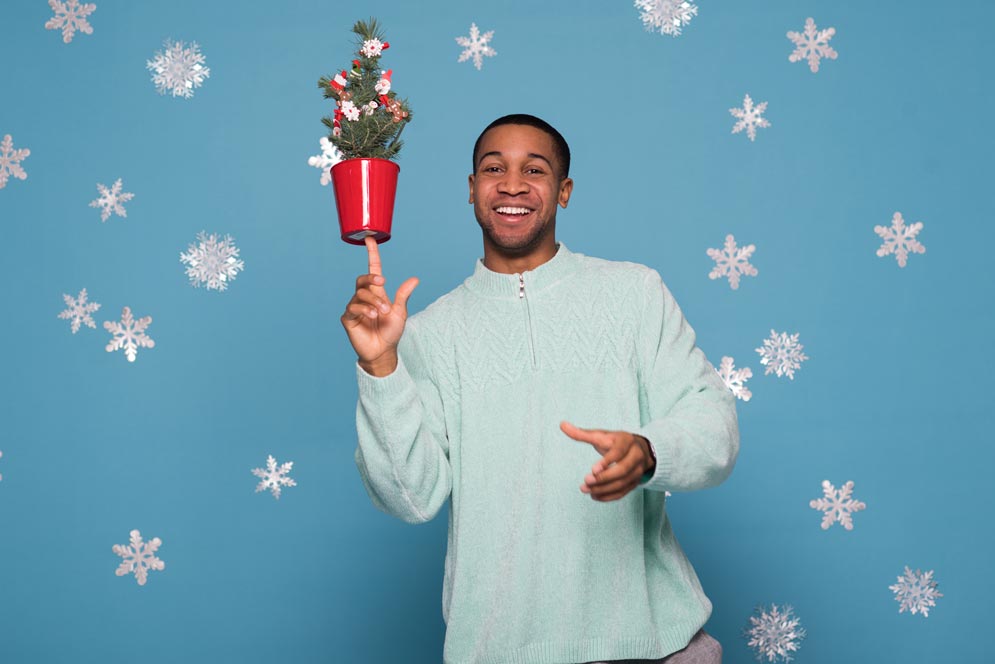 Kamali Chambers (COM’19) found this sweater at Goodwill in West Campus. “It’s ugly enough for me to wear for an ugly holiday sweater contest, but still kind of stylish,” says the men’s basketball point guard. 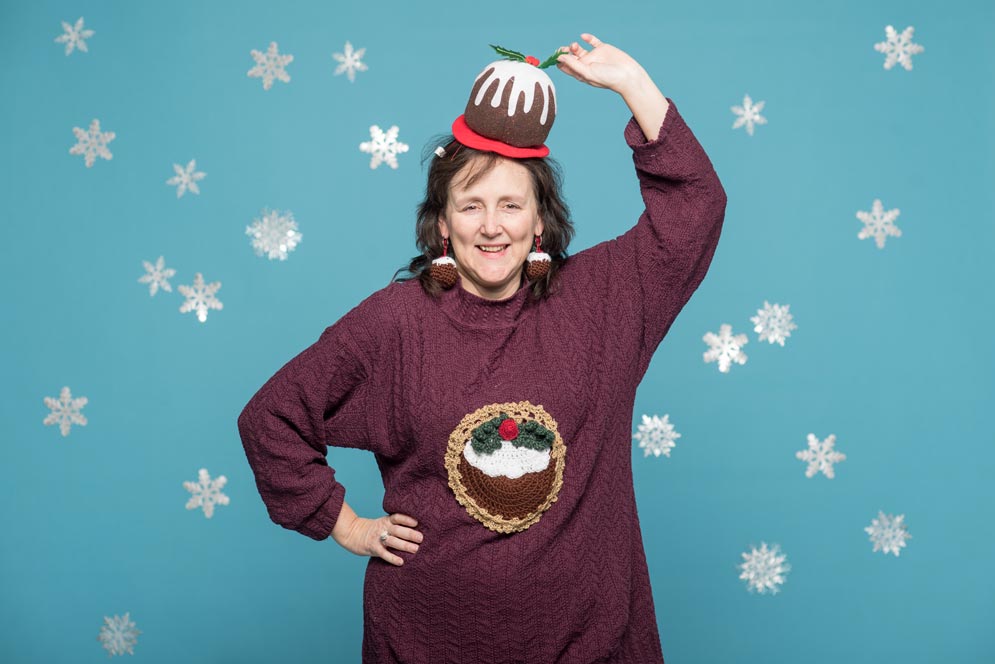 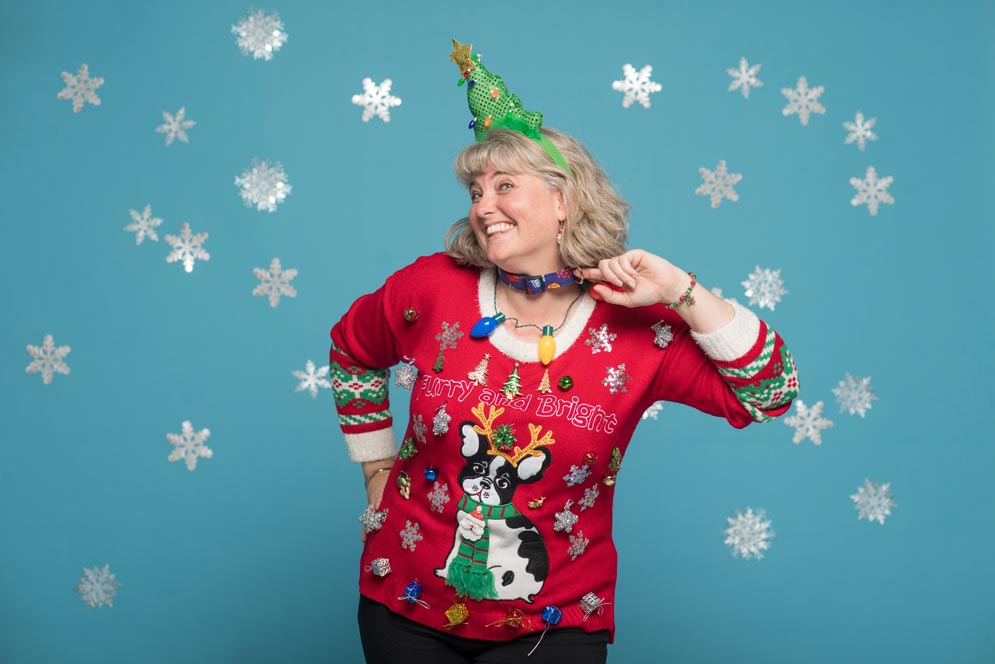 Suzanne Markham Bagnera, an SHA clinical assistant professor, has owned her ugly sweaters “since the 1990s when they were trendy and cool, not considered ugly.” This year, she “wanted to refresh my attire and felt compelled to add Rhett to my wardrobe to be a little more BU-focused. 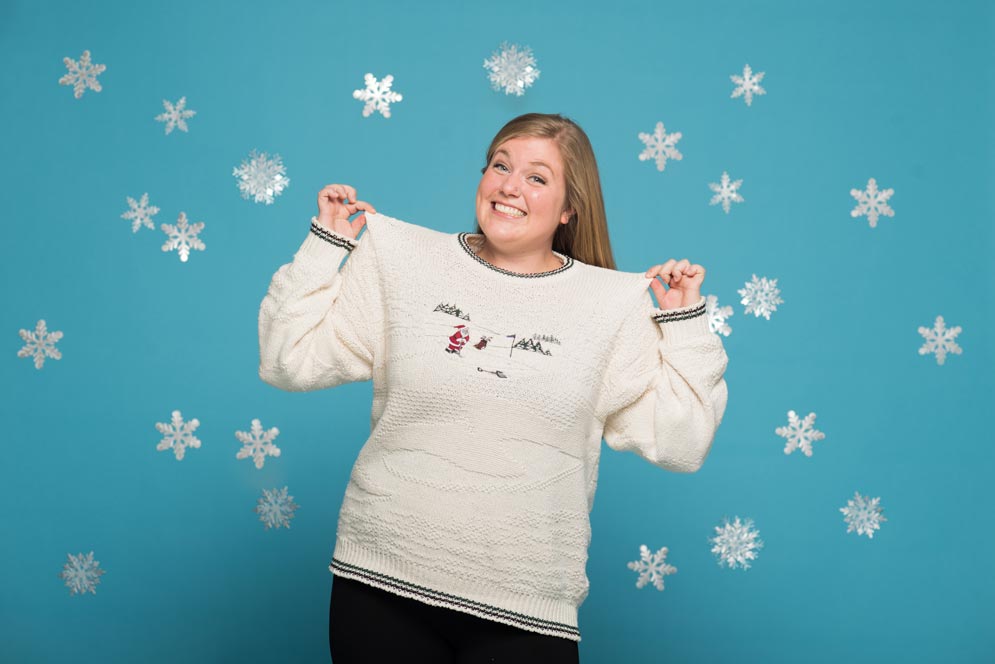 Kate Wilson (SHA’12), SHA marketing manager, bought her sweater on eBay. “My dad used to wear a sweater exactly like this one every year on Christmas, but he didn’t wear it as a joke—he didn’t think it was ugly. My mom did. One summer, she threw it out, and come Christmas Day, when my dad couldn’t find it, he was so upset. He would bring it up every Christmas after that. Last year, I found this sweater and had to buy it for him. It will be priceless to see him open it on Christmas.” 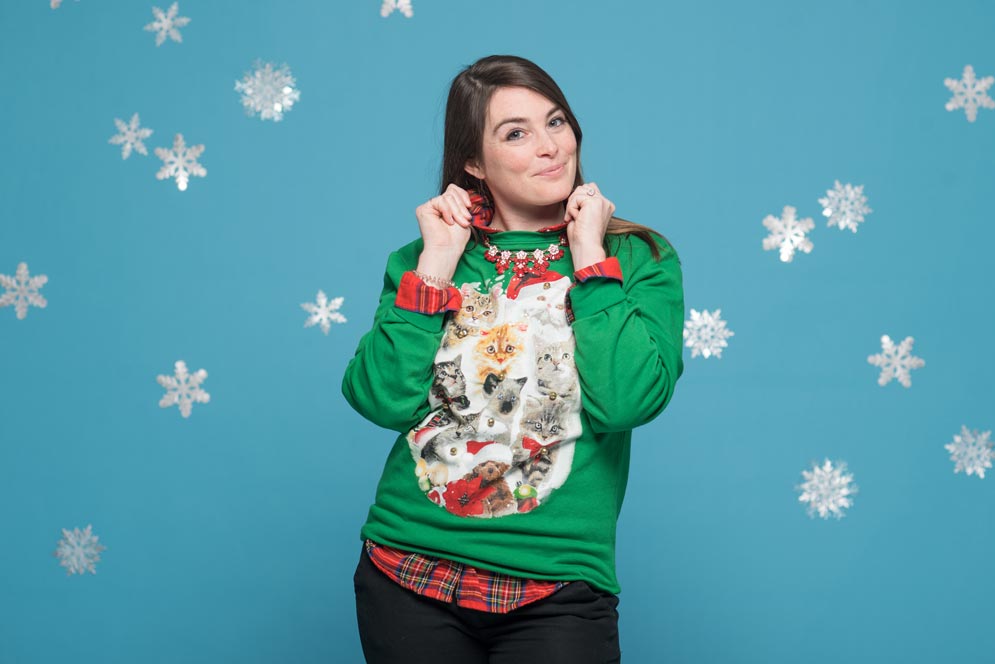 Liz Vassallo, Wheelock academic success specialist, describes herself as “a total cat lady,” and says that for the past three years, her brother has given her a cat sweater. “He found this particular sweater in Japan: he’s an officer in the Navy and he found this at a local shop. My cats have approved of all the bells. 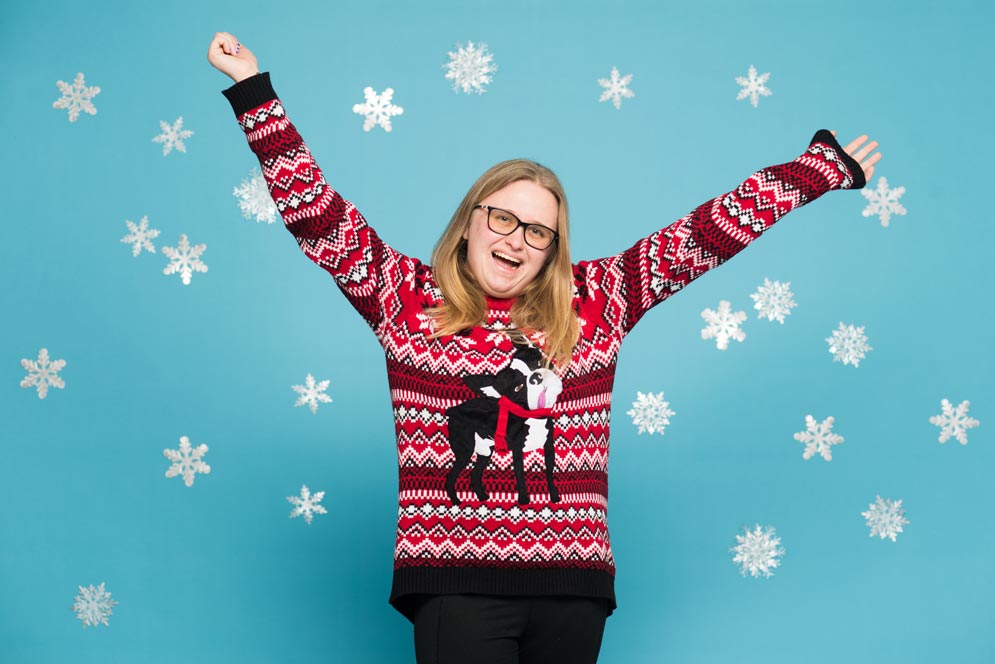 Noelle Ballantine (Wheelock’20) found her Boston terrier holiday sweater at Target. “I just got it last week: I was shopping for groceries and saw it and knew I needed it. It was on sale for $20. 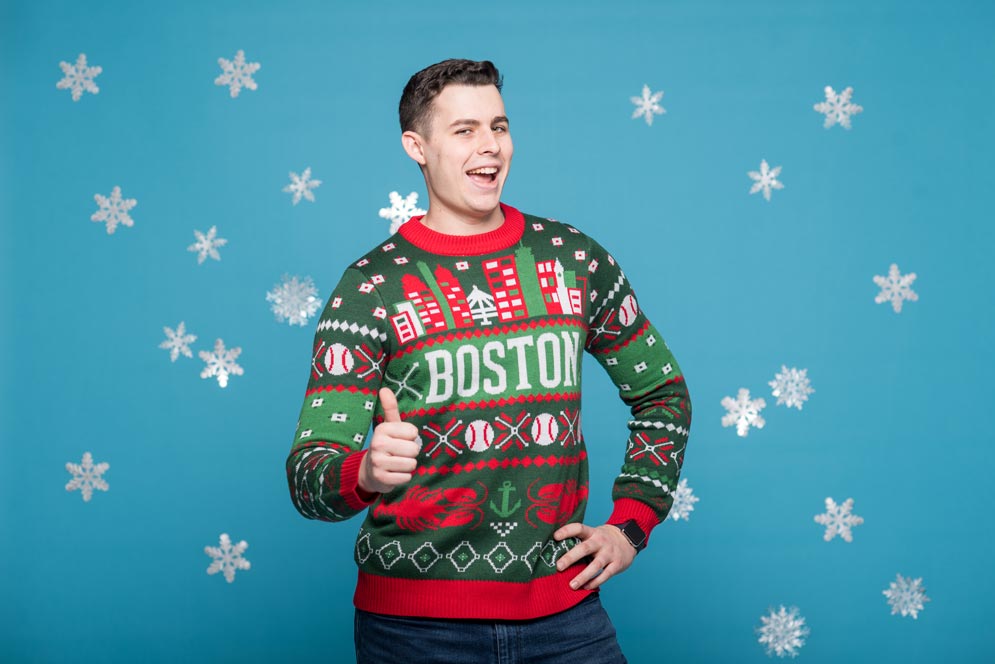 Gavin Fynbo (CAS’19) got his holiday sweater from a friend, who won it in a contest through Uber last year. “They only had a large, so he gifted it to me, instead,” Fynbo says. 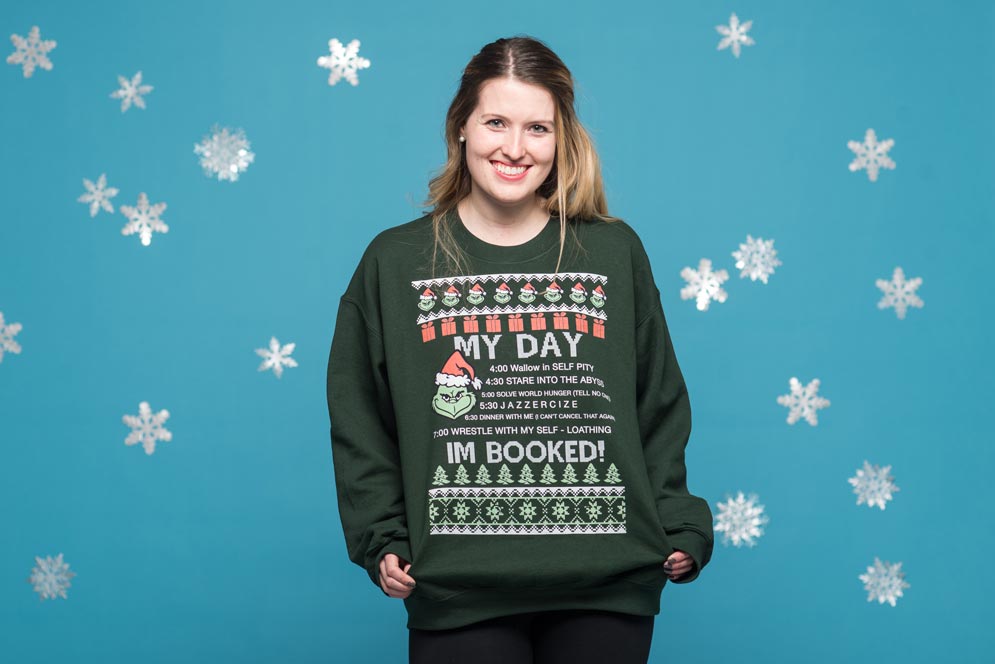 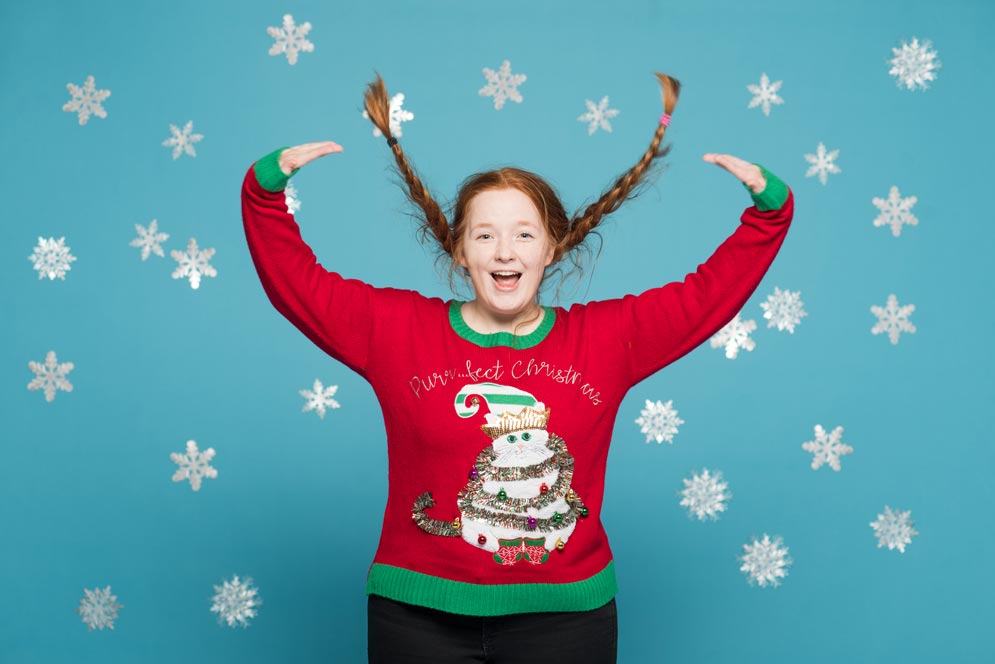 Kristin Orsi (Wheelock ’20) bought her sweater at the Fenway Target store. “I only paid $18 because I got it on sale for 40 percent off. Noelle Ballantine (another contestant) taught me how to use the Target app for discounts—life-changing.” Even though she’s only had the sweater a week, she says, “it feels like a lifetime. We’ve been through a lot together.” 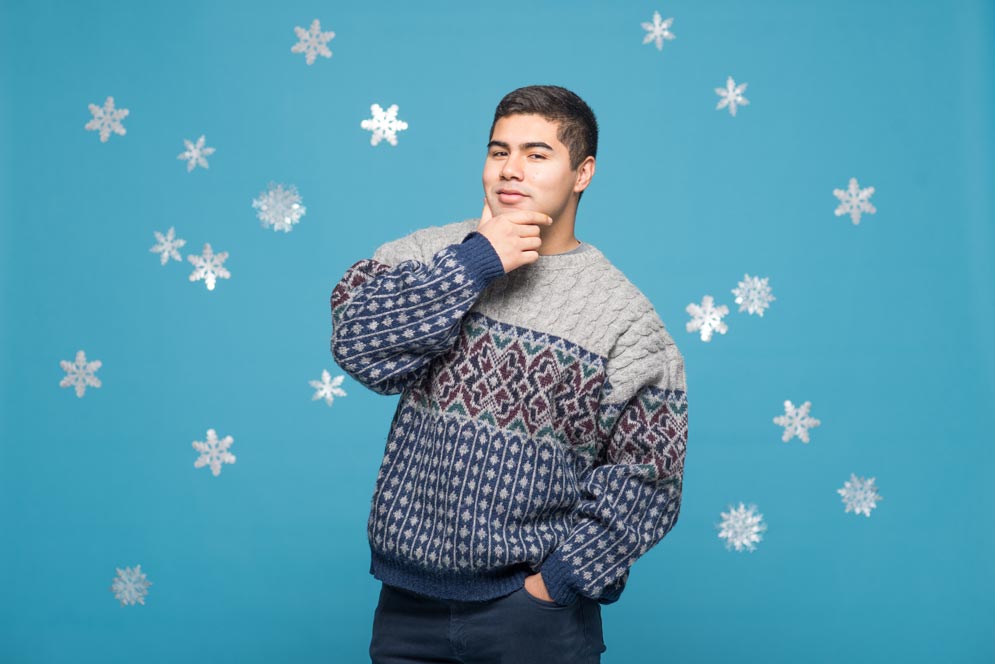 Augustine Jimenez (CAS’20) bought his subtle snowflake-patterned sweater at the Goodwill in West Campus. “One of my friends works at Goodwill, so I was able to get a friendly discount on it,” he says. “The sweater cost me $5 max.”

Samantha Vigeant (Wheelock’19), CCD program coordinator, also bought her sweater at Rockaetee, and like Gignac, paid $27.99 for it. 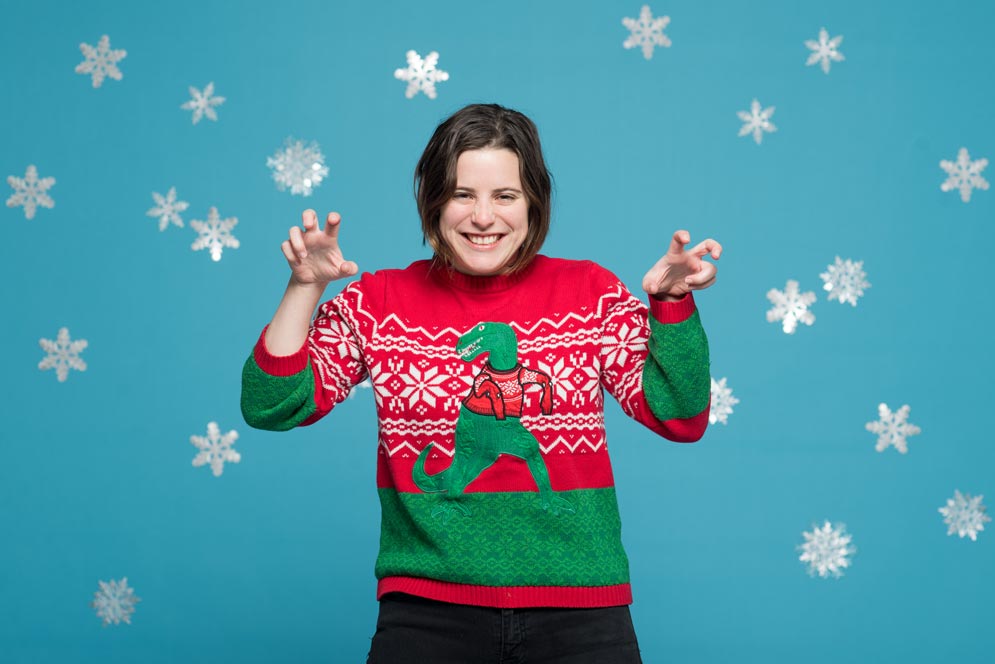 Talin Yaghoobian (CAS’14, Questrom’23), Pardee School of Global Studies assistant to the dean, bought this sweater on Amazon a few years ago to wear to a friend’s ugly sweater party. “I was tired of reindeer and Santas. After slogging through pages of ugly sweater designs, I figured I’d search for dinosaur-related ones to make it interesting—who doesn’t love dinosaurs? I fell in love with this hideous thing instantly. It served me well at the party and received its fair share of compliments when I’d wear it around the holiday season working as a bartender at the Downeast Cider House. It’s very comfortable, so sometimes I wear it on weekends just because. It’s fun and silly.” 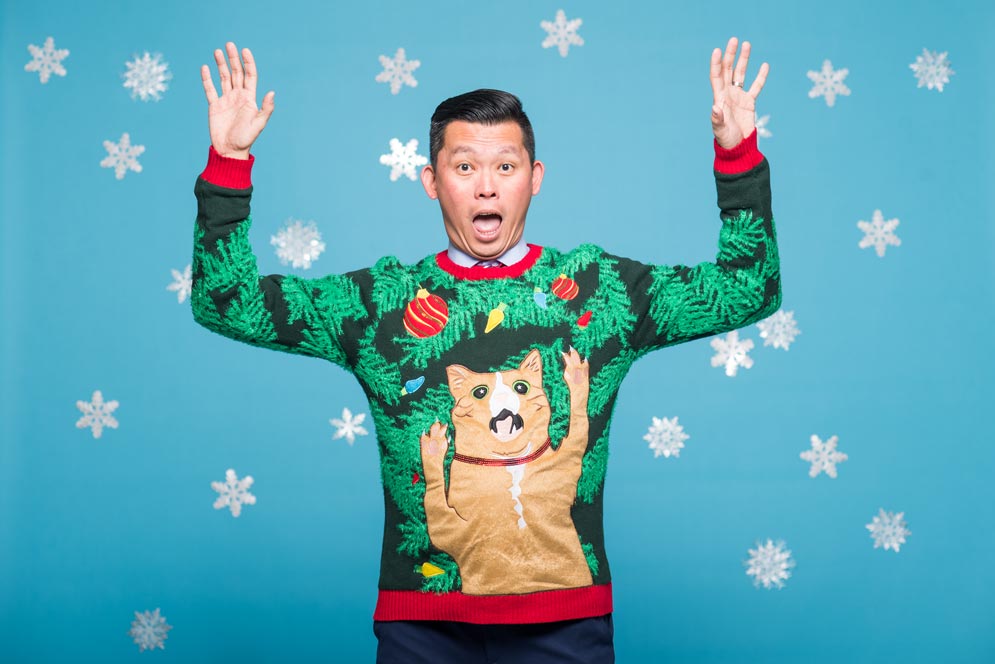 Han Han (CAS’96), Development & Alumni Relations IS&T project manager, says his wife bought his sweater at Target. “She picked this sweater because we have two cats at home, one who is proficient at undecorating Christmas trees,” he says. He’s only worn it once before, to his in-laws’ Christmas gathering last year, but it “may make additional appearances on the BU campus this holiday season.” 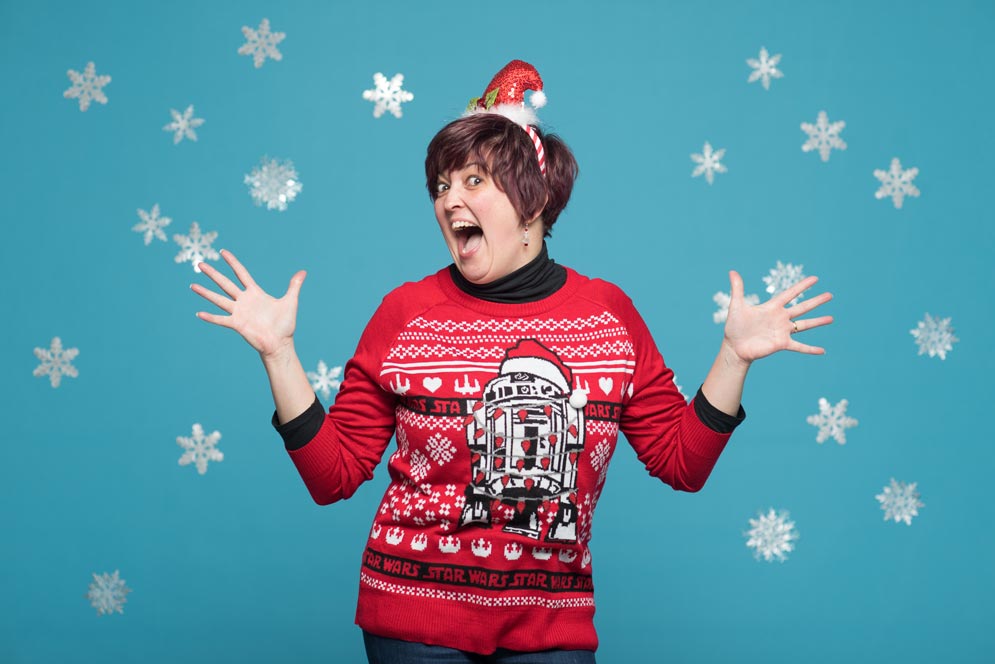 Olivia Szabo, Center for English Language and Orientation Programs (CELOP) senior lecturer, says that she got this sweater last year as a birthday gift from her friend and colleague Stephanie Ngom (another contestant). “She knew I had wanted an ugly holiday sweater for a while,” Szabo says. 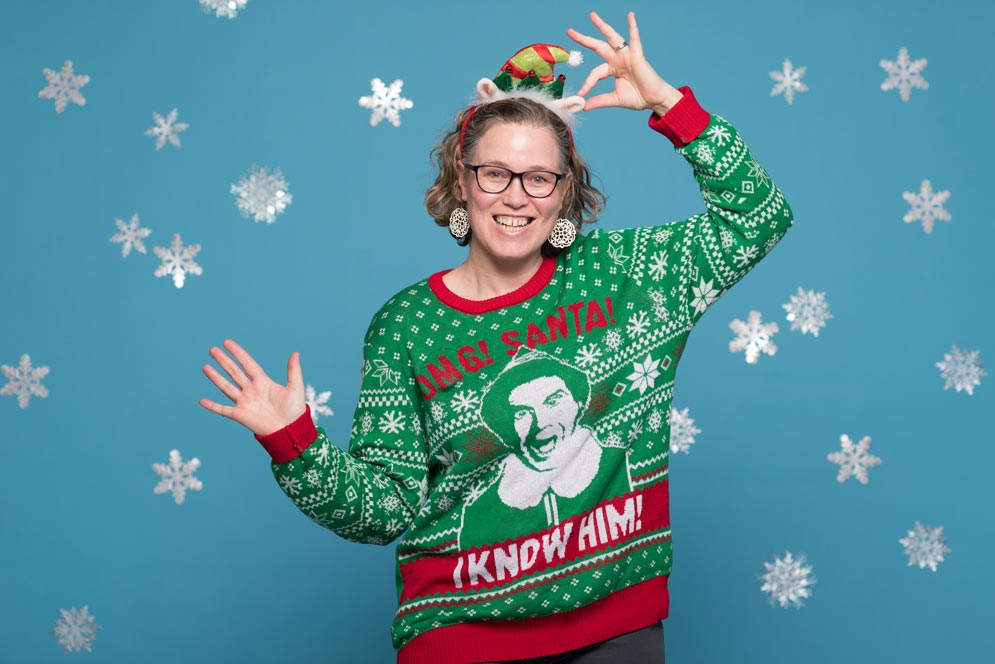 Stephanie Ngom, CELOP senior lecturer and coordinator of the Bridge to BU Program, bought this sweater at Target for $20. “I just love that movie Elf with Will Ferrell, so I wanted to get something goofy with him on it,” she says. “My kids and I watch it every year.”

Alina Chenausky (ENG’19) found her sweater at a thrift store in Arizona for less than $10. “It was love at first sight and we’ve been together for seven years now. I spend every Christmas with my sweater and it’s hard to imagine a holiday season without her. It’s always been a dream of ours to win an ugly sweater contest, so winning would be so amazing.” 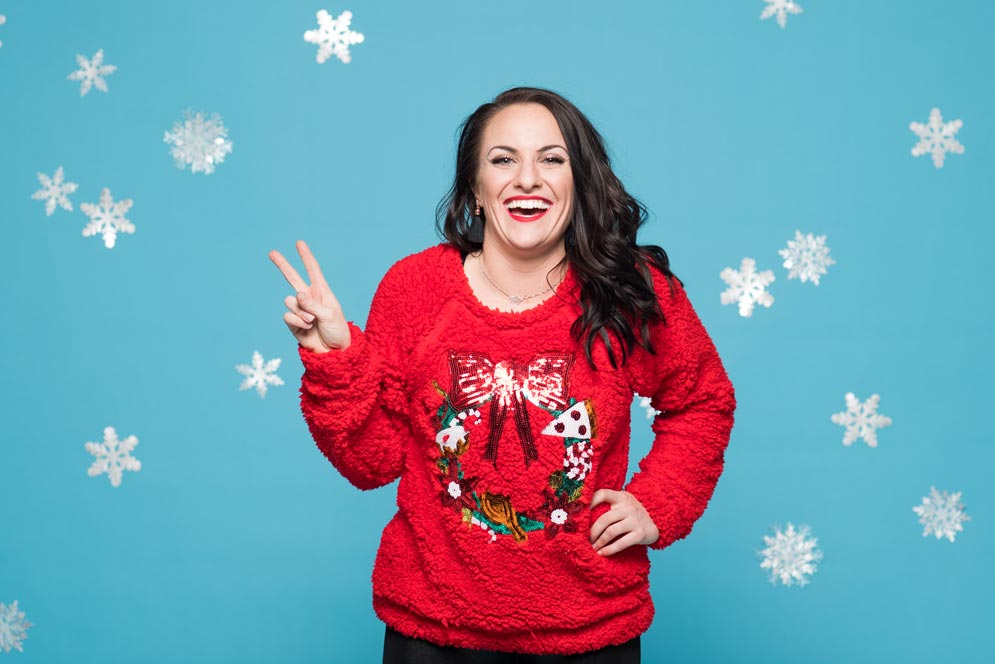 Melissa Wadman (MET’18), MarCom Marketing and Creative Services project manager, says she ran into Goodwill between meetings because she needed a sweater for a holiday party; it was $4. “I saw this bright red, fluffy, comfy sweater with sequins on it—done. Little did I know until I was wearing it, and people began pointing out, that there’s a slice of pizza, a donut, and a chicken wing on the wreath. It is now my absolute favorite holiday sweater ever: I feel as though it truly encompasses the breadth of my personality.”

The Bold and the Not-So-Beautiful