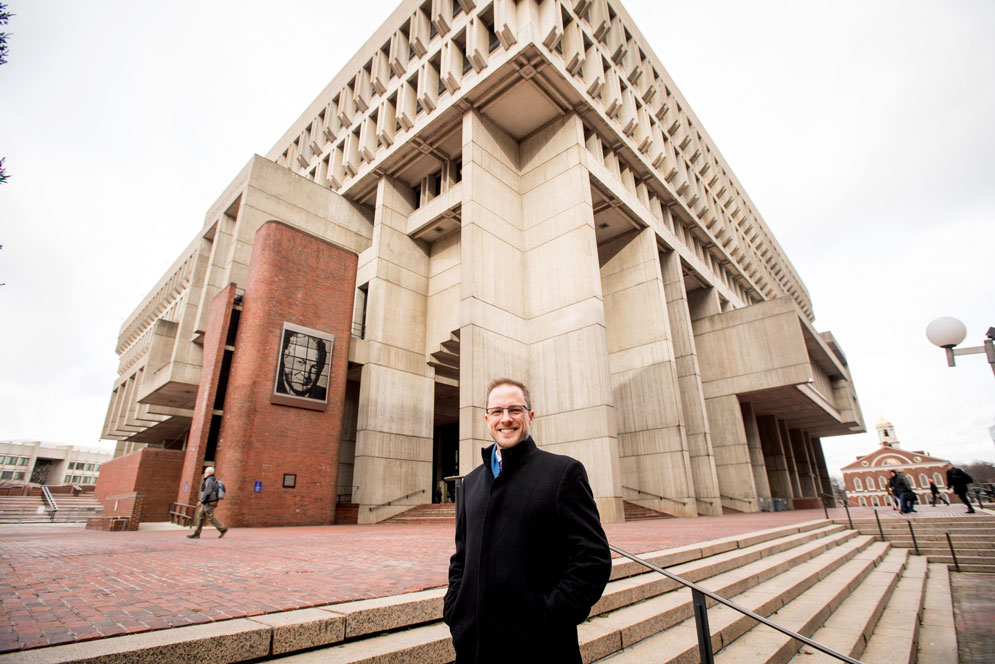 Brian Sirman (CAS’02, GRS’08,’14), a lecturer in the CAS Writing Program, says he became fascinated by Boston City Hall because it is a building that “was so widely and vehemently hated.” Photo by Cydney Scott

When Boston Mayor John Collins announced in 1961 that the city of Boston was launching a design competition for a new city hall, the news was greeted with enormous fanfare. The city hall on School Street was outdated and had long been overcrowded. More important, a new building would symbolize a “New Boston,” an era of political transparency after years of graft and corruption. The jurors tasked with selecting the winning design noted that the new city hall would serve as “a keystone between the historic past and the brilliant future which is to come.”

After careful consideration, the jury—comprising prominent local architects and businessmen (there were no women)—chose the most revolutionary of the eight finalists’ designs.

From the moment it was unveiled, the winning design, by the architectural firm Kallmann, McKinnell and Knowles, proved divisive. Some hailed it as a masterpiece of Brutalist architecture (an aesthetic that blends change and coarseness, using concrete as its primary building material). Others derided New City Hall, as it was referred to, as one of the ugliest buildings in the world. One critic said it looked “like the crate Faneuil Hall came in.” And Patrick McDonough, a city councilor at the time, quipped that “the only thing missing is the gas pumps.” There’s no shortage of residents who complain about the empty plaza surrounding the building as well. In short, since its completion 50 years ago, it’s become the building that Bostonians (well, many of them, anyway), love to hate.

As Brian Sirman (CAS’02, GRS’08,’14) notes in his fascinating history of the building, Concrete Changes: Architecture, Politics, and the Design of Boston City Hall (University of Massachusetts Press, 2018), “It was the best of designs, it was the worst of designs.” In the half-century since it opened, the building’s reputation has waxed and waned. Sirman, a College of Arts & Sciences Writing Program lecturer, says that despite the “far-reaching and long-lasting effects” the building has had on both architecture and politics, it’s now “facing a midlife crisis,” including years of neglect and costly looming upgrades.

Sirman’s book is full of intriguing tidbits. Who recalls that the architects’ original design called for a rathskeller, or beer hall, in the basement, similar to those found in many European city halls? And that designs for the plaza called for a permanent skating rink that could be used as a reflecting pool in the warm-weather months? Sadly, neither came to pass.

As City Hall celebrates its 50th anniversary, BU Today spoke with Sirman about his book and what he discovered in the course of his research about the building.

BU Today: How did you become interested in architecture?

During my freshman year at BU (exactly 20 years ago) I took a class on 19th-century architecture with Keith Morgan, now a professor emeritus of history of art and architecture. At the time, I expected merely to fulfill a general education requirement, but I fell in love with the subject. During that semester, Professor Morgan announced to the class that one of his former students, who was then the curator of architecture at the MIT Museum, was looking for an intern. I sent in my application and ended up working there for the next three years. Incidentally, Professor Morgan eventually became my dissertation advisor in graduate school, and I dedicated the book to him.

In fact, Concrete Changes grew out of your doctoral dissertation. What was it about City Hall that so captivated your imagination?

I was intrigued by the fact that it was so widely and vehemently hated. I wanted to figure out why it elicited such strong reactions and (more importantly) why such an unconventional and controversial design was built in the first place.

As you researched the book, what surprised you the most?

I was surprised by how my view of the building changed. When I began the project, I set out to prove that Boston City Hall was the greatest building in the history of mankind. As I got deeper into my research, though, I found much of the criticism of the building to be cogent and compelling. From a purely architectural-historical perspective, the building is magnificent—the sculptural drama of the exterior, the breathtaking, soaring spaces of the interior, the bold revelation of structure and construction in the exposed concrete. But the critics reminded me that the building is not merely an architecture student’s studio project or an urban sculpture. It’s a city hall, and as such, it has tremendous symbolic responsibility. What the building says about Boston and about democratic government strikes many people as inaccurate or inappropriate, and those concerns merit serious consideration.

The building was meant to represent a new era in city politics. Can you talk about that?

By the 1950s, Boston was in trouble. Middle-class and wealthy residents were fleeing to the suburbs. The city’s finances were in shambles. And the city government was notorious for corruption after nearly 50 years of rule by unscrupulous mayors. Starting in the late 1940s, Mayor John Hynes, and later Mayor John Collins, believed that Boston could build its way out of this slump. By erecting grand, modern buildings, Boston could demonstrate that it was not just a dying city with a distinguished history, but rather a city that was embracing the future. That was the goal of the “New Boston.”

Did the building live up to Mayor Collins’ assertion that it would be “a symbol of civic rebirth”?

I’d say it did. At the time, this was avant-garde architecture—especially in Boston. It took a great deal of courage to accept such an unconventional design for a new city hall, and people at home and abroad took notice. What better way to show that Boston was turning the page on an unsavory period in its history than with trailblazing architecture?

You’re clearly a fan of the building in many ways. What are your feelings about the plaza?

I’m actually not particularly enthusiastic about the plaza. It’s a desolate and dreary space, and I’m not sure that anything can be done to redeem it. The main problem is its utter lack of activity generators at its edges. City Hall and Congress Street are effectively barriers between the bustling Faneuil Hall/Dock Square area and the plaza. Cambridge Street has the same effect on the other side. The Federal Building deadens the north, and the few shops and cafés on the southern edge simply aren’t enough to vitalize the vast middle. The occasional concert or ice rink provide temporary solutions, but those efforts are always, on some level, artificial. A truly successful public space doesn’t need a circus tent, a craft fair, or some other gimmick to attract the public. People go there because they want to, because it’s a pleasant place to be. That’s just not the case with City Hall Plaza.

As for the building, I do admire it. It’s a bold design that stands out just as much today as it did 50 years ago. I must have been to the building hundreds of times during the past 10 years, yet with each visit I’m awed anew by the complex geometries of its form, the intricate weave of its structural elements, and the interconnection of its varied spaces. Even its fiercest critics would agree that it’s not boring. To my mind, that’s a virtue in an age when timidity (to the point of banality) is the defining characteristic of most recent buildings in the city.

Why do you think the building draws so much antipathy from Boston residents?

There are many reasons. First, the Brutalist style is out of fashion. Second, the building has suffered from decades of neglect and deferred maintenance (though that’s begun to change under Mayor Walsh). Finally, many people believe the building is not an appropriate symbol of the city and of democratic government.

You’ve written Boston City Hall is currently facing a midlife crisis. How so?

Every building goes through vicissitudes in reputation. There comes a point—usually about 40 or 50 years after construction—when a building will have fallen stylistically out of fashion, but it’s not yet old enough to be appreciated as “historic.” That’s also when mechanical systems tend to fail, decades of accumulated grime become intolerable, and the functional needs of the building’s users have grown or changed in ways that would require significant remodeling. So there’s a decision to be made: is the building worth the costly investment in renovation? Or would it be better to tear it down and build anew?

What do you think the legacy of City Hall will be?

I predict that City Hall’s legacy will be two-pronged. First, it will be recognized by architectural historians as an important example of Brutalist architecture. To some extent, this has already happened. It appears in many of the textbooks, and it’s taught in classrooms not only in Boston, but also Baltimore and Boise, and even in Brasilia and Berlin. When I presented at an architectural history conference in Milan a few years ago, there wasn’t a person in the room who hadn’t heard of Boston City Hall. The building’s second legacy will be more localized. Boston will come to see the building as both a symbol and a catalyst of changes that took place in the city during the middle decades of the twentieth century.

Are you optimistic that it will survive?

I’m more optimistic now than I was when I started my research seven years ago. Mayor Walsh has made some significant investments in the building (such as new lighting, a reconfigured security station, and a new coffee bar). He’s also tried to bring activity to the plaza. That said, the mayor is only one person, and there’s only so much he can do. For the building to thrive, there must be a more widespread commitment among the people who work there, and this is not currently the case.

For example, I took my Boston Architecture class to the building last month, and one of my students pointed to a stack of folding metal chairs that had been dumped at the top of the grand staircase, and an assortment of abandoned construction materials (pipe and conduit) lying on the floor outside the city council chamber. “It just seems like no one cares,” he said. That summed up the problem perfectly. How much effort would it have taken to put those chairs in a closet? Or to take that leftover conduit to the basement? It would be unthinkable for that sort of clutter to accumulate outside of the senate chamber in the State House, yet at City Hall such disregard for the building has become normalized.

If it were to be torn down, as some have argued it should be, what would be lost?

A city’s architecture is an enduring physical record of its history. The different styles, sizes, shapes, and materials of buildings say something about the values and the culture of the people who built them. In a significant public building like City Hall, this effect is even more pronounced. So in a way, tearing down City Hall would be akin to tearing a chapter out of a history book. We would lose that sense of what Boston once was, which would be tragic for a city that claims to cherish its history.

A Tribute to the Building Bostonians Love to Hate