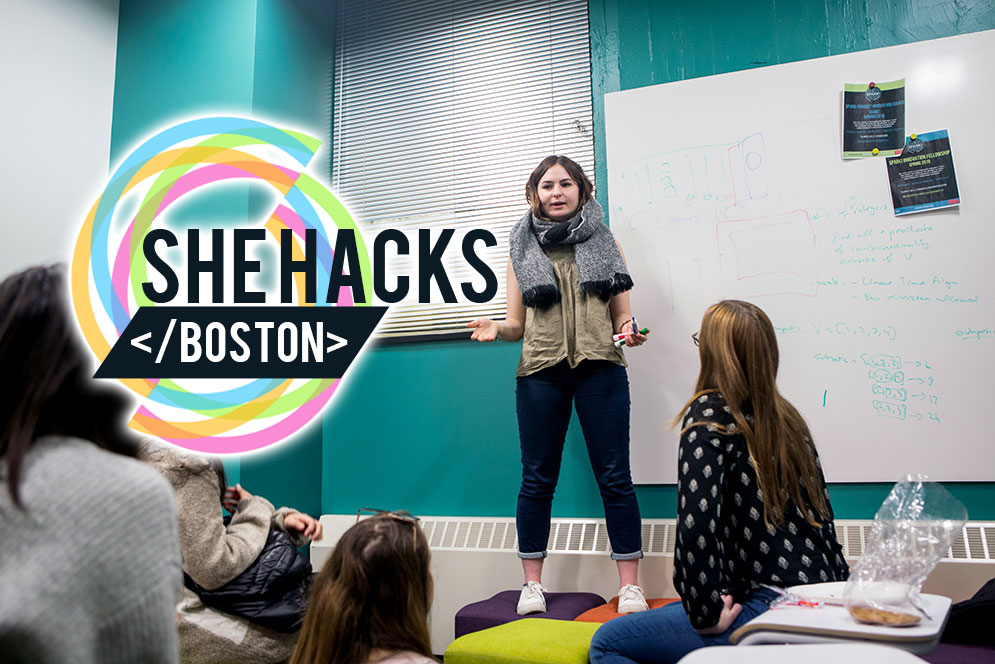 Fiona Whittington went to her first hackathon by herself. It didn’t go well.

“When I walked in some guy came up to me and was like, ‘Do you even code?’” she says, imitating his sneer. “And I’m like, ‘Look at my laptop, it says Girls Who Code. Of course I belong here.’”

That hackathon in New York a year ago was pretty traumatic, says Whittington (COM’19). There were hardly any other women, and she felt unwelcome, at least until a couple of BU guys took her under their wing. “Women should never have to feel that way at a hackathon,” she says.

She decided to do something about it. This weekend, BU plays host to SheHacks Boston, which she created in response to that reception in New York and hopes will be the largest-ever female and femme nonbinary hackathon. The event has a target of 1,000 attendees, and more than 800 college and high school students have already registered. Most are from the United States and Canada, but a few are coming from as far away as Ethiopia and Morocco.

The SheHacks mission statement: “Empower women and femme nonbinary individuals in technology to achieve. Provide them with opportunities to explore the tech industry in an inspiring, encouraging, and energizing environment. Create a community of inclusivity within the tech industry.”

For the uninitiated, a hackathon isn’t some quasi-criminal identity-theft fest, but a programming marathon where coders collaborate to create software that could be used to meet a variety of challenges.

Headquartered at the George Sherman Union’s Metcalf Hall, but spreading out to rooms in several other campus buildings, SheHacks will bring together teams of two to six coders who will compete for prizes ranging from consumer technology such as Amazon Fire tablets to a pitch session with a venture capital firm. Numerous challenge categories include Gender Equality (help victims of sexual assault raise their voice and access resources) and Political Polarization (help combat the fake news phenomena) as well as She </Laughs> (for the team with the most hilarious and creative hack).

SheHacks begins at 8 pm Friday and runs until 2 pm Sunday, with hacking, prizes, pizza, hacking, music, guest speakers, hacking, and more. BU students make up the majority of the central organizing group of about a dozen, but MIT, UMass Boston, Northeastern and NYU are also represented, and students from other local schools are among the 100 volunteers.

SheHacks is funded by more than $130,000 from dozens of sponsors, among them Major League Hacking, Facebook, Bloomberg, and Mass Housing. Other supporters are the College of Arts & Sciences, the CAS computer science department, the College of Engineering electrical and computer engineering department, the Questrom School of Business, Innovate@BU, BUildLab, and BU Spark! Whittington says she’s also received key support from Natalie McKnight, dean of the College of General Studies, and Tracy Schroeder, vice president of information services and technology.

“The world needs the perspective of women in all aspects of technology,” says Schroeder. “Women have different needs and perspectives on these things than men, and if women are not involved, women will not be well served.

“Is it lonely for women in tech? Short answer: yes,” Schroeder says. “I can’t tell you how many meetings I attend where I am the only woman in the room. I’m over it, I can handle it, but it shouldn’t be that way. What do I hope comes from SheHacks? More women in the technology profession. It’s that simple.”

“This is an ambitious undertaking, particularly for undergraduates,” says McKnight, who made a personal donation to SheHacks. “I am very impressed with their courage and professionalism.”

Whittington is an advertising major, but she jokingly calls herself an unofficial computer science minor and spends a lot of time at the Rafik B. Hariri Institute for Computing and Computational Science & Engineering, where Spark! the initiative to support student innovation and entrepreneurship in technology, is housed. She is also the founder and president of the BU chapter of Girls Who Code, a club that promotes diversity in technology through weekly Coffee, Code, and Chill events and held a small BU-only hackathon, Hack the Gap (that would be the gender gap), last fall.

“This has really been a full-fledged student effort,” says Ziba Cranmer, director of BU Spark! “Fiona was my star employee at Spark! and we spoke often about how to create an innovative and inclusive computer science community at BU, and specifically about the issue of women and underrepresented minorities in tech.”

“Fiona started this because she recognized the problem and how it affects everyone, especially at our age, in classes, and especially hackathons,” says SheHacks head of finance Natalie Pienkowska (CAS’20), who is majoring in computer science and minoring in business and environmental analysis. “We all shared this, how we’d end up being the only female on our teams and be a little pushed aside and wouldn’t have a major role.”

Whittington and Pienkowska are collaborating on an Undergraduate Research Opportunities Program (UROP) project studying how women’s interest in STEM (science, technology, engineering, math) fields is affected by a gender-restricted environment versus a coed environment, using SheHacks as a case study. UROP pairs students with faculty mentors and provides funding for their projects.

Whittington says it’s not the condescension that bothers her most, or the failure to take her seriously at male-dominated hackathons. “The surprise is what bothers me most, surprise from both genders,” she says. “The girls who say, ‘That’s really cool, but I could never do that.’ That’s what really irks me. You can do it. Just copy and paste a couple of lines of code and press run, you know?

“But that’s also what’s beautiful about computer science, when you see someone for the first time believe in themselves, and how easy it really is,” she says. “People believing in themselves, that’s all I’m really hoping for.”

Iccha Singh, a 15-year-old high school sophomore and coder from Princeton, N.J., believes in herself. She met Whittington and other SheHacks organizers at a hackathon in Pennsylvania last year and immediately got excited. Now listed as SheHacks high school ambassador, Singh raised just over $2,500 via a Kickstarter campaign to pay for a bus to bring 50 women from New Jersey high schools and colleges to Boston for the event.

“I’m currently taking AP computer science at my high school, and there’s not many girls there,” says Singh. “I expected to face this in the workforce as well, because women make up only 25 percent of coders, and this is going to be an issue until everyone accepts it as a real issue and starts changing their act.” At SheHacks, she hopes, she’ll see women treating one another not as competitors, but helping one another learn and grow and using software to make the world a better place—“that’s the biggest thing.”

“Technology is amazing, and we’re creating a community around it,” Pienkowska says. “With everything going on in the media today with #metoo and things like that, it’s a great time for all females to come together, and we’re just focusing on this one little part of it.”

SheHacks Boston will be held at the George Sherman Union Metcalf Hall from 8 pm Friday, January 26, until 2 pm Sunday, January 28. Walk-in registrations will be accepted in the GSU second-floor lobby beginning at 8 pm on Friday.

There are 10 comments on SheHacks Boston Student Organizers Are #makingthenewnormal