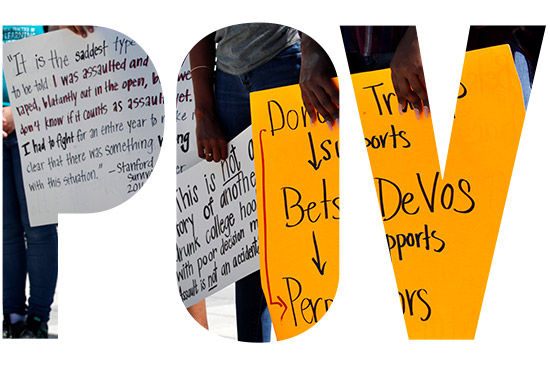 One in 5 women, and one in 16 men, experience sexual assault in college. For victims, reporting an assault comes with fear of retaliation, not being believed, and a taxing encounter with campus justice systems.

Cross-examination also gives the accused more power, replicating the power dynamic that already exists in cases of sexual violence. Colby Bruno, a senior legal counsel for the Victim Rights Law Center, responded to DeVos’ proposed Title IX rules thus: “Rape is about power and control and not about sexual desire. Therefore, it is a bad idea to give the person with the power even more power to intimidate and hurt the victim.”

DeVos’ proposed rule changes will also exacerbate social and economic inequities. Students are not appointed representation, but will have to choose their own advisor for the live hearing. Wealthier students will be more likely to hire a lawyer, while lower-income students and those lacking in social capital will be less able to do so. This places some students at greater disadvantage within the campus judicial process.

Finally, the proposed plan would absolve schools of much responsibility vis-à-vis the protection of their students. When an educational environment is made hostile due to reported sexual violence, it is the school’s responsibility to address that situation. In particular, if students choose to trust their schools over law enforcement, those schools have a duty to protect, support, and advocate for them. Families also place great faith in an educational environment to keep their children out of physical and emotional danger; under these new rules, schools will be able to abandon that responsibility.

DeVos’ proposed rule changes have made one thing clear: her priority is the protection of the accused, even as the burden on survivors is already far too high. Yes, some individuals are falsely accused of perpetrating sexual violence, but it is a small percentage. The prevalence of falsely reported cases of sexual violence fall between 2 percent and 10 percent. By contrast, over 90 percent of sexual assault victims on college campuses do not report their assault in the first place. We can be aware that false reporting is a possibility even as we acknowledge its rarity. We should prioritize a system that protects the victim from further traumatization and ensures a safe learning environment.

The proposed rules are now open for public notice and comment through January 28, 2019. This gives us, members of the public, the opportunity to comment on the damage these rules will pose for survivors if they become final. Information on submitting your comment can be found here. While the comment period is open, victims’ allies can, and should, submit statements objecting to the proposed rule changes.

Gabrielle Schwartz (SPH’19) is studying health policy and law, with an emphasis on women’s health policy. She can be reached at gabbysch@bu.edu.