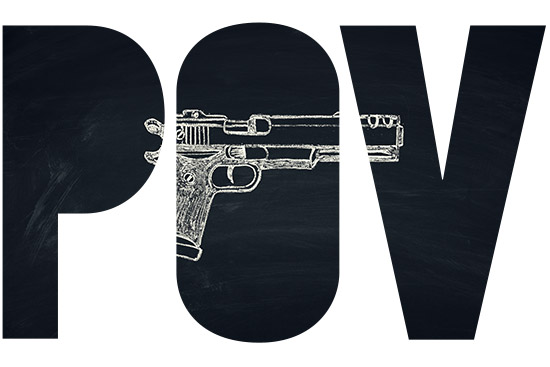 Every semester I ask the students in my School of Education course Introduction to Research to describe the characteristics of an important, trusted adult at the schools where they work. Consistently, their answers describe people who are approachable, caring, respectful, compassionate, patient, engaged, and even somewhat strict when it comes to performance standards.

Never have I heard a student cite “ability in target practice,” or any other characteristic remotely evocative of an armed school staff person, when conducting this exercise.

As the public debate about arming our teachers persists in the wake of the Parkland, Fla., school shooting February 14, the voices of students in my courses that help train future educators are united against such a notion. Educators-in-training don’t want guns in school, and many feel that such conditions would force them to leave the profession or alter their current path towards it. Start arming teachers, and our best and brightest young educators will start looking elsewhere.

Outside of the classroom, I’m an education and psychology researcher. As such, I am particularly distressed that in lieu of actual data and analysis, we’re relying on opinion and emotion for policy decisions. I give credit to the current movements—from Ferguson to Florida—for attention to gun violence, to the experiences of students and families directly affected, and to the statistics that we are able to compile through public records. We need to eliminate federal restrictions on funding for much needed research designed to understand how to maintain safe storage and usage of guns for those who choose to own them. We also need to gather evidence that more reliably guides us in developing restrictions for ownership. In the meantime, we need to remember that there is no evidence to support the suggestion that arming teachers will make us safer.

The very idea of “good guys with guns” vs “bad guys with guns” reflects a misguided heroic revenge fantasy that exists in the movies and is unlikely to happen in real life. Unless you are trained military or a law enforcement officer, you do not actually know what you would do if you were to come face-to-face with an armed assailant who has on their side the element of surprise. Research on police accuracy in the use of firearms when responding to emergency calls ranges between 17 percent and 48 percent, depending on distance. Even well-trained individuals may become frozen in their response or be overpowered. I can say from my own experience, having been the victim of an armed robbery while working in a record store as a teenager, simply staying alive overtakes the inclination for heroism.

We need to remember that guns are simply dangerous, and assault-style weapons to an even greater degree. They are meant to be so—their purpose is to kill. There’s something perverse about introducing, via armed staff, the possibility of taking the life of a student one has made a commitment to teach. As teachers, coaches, counselors, administrative and support staff, our goal is to support student achievement and holistic well-being. The success of that goal depends on strong, positive relationships between educators and students. Those relationships are even more vital to students who may be struggling for a variety of reasons, visibly or invisibly. Arming staff necessarily creates barriers and stunts these connections by changing the very nature of the school setting. This is especially dangerous for students of color, who are three times as likely to face suspension or expulsion for school infractions compared to white peers and who are already targeted by police presence in our nation’s schools.

Problematic, too, is how we are addressing and including mental illness in this debate. By isolating mental illness as the culprit in many of these school shootings, we add to the stigmas surrounding mental illness while taking attention away from the toxic presence of guns in schools. Arming teachers will further jeopardize students’ willingness to access mental health services and will do little to alleviate the symptoms of anxiety that may already interfere with learning. There is an imbalance at work here—a willingness to blame mental illness while ignoring the fact that less than 5 percent of cases of mental illness are associated with violent behavior, as well as to further ignore the impact that armed staff would have on children whose learning, achievement, and well-being may already be threatened by exposure to trauma and violence (about half of children have experienced an adverse event) and who may have related diagnoses of post-traumatic stress disorder (estimates of 5 percent of adolescents), depression (estimates of 9 percent of children), or an anxiety disorder (estimates of up to a third of all students).

The shock of an event like the Parkland shooting bends the focus of the larger gun control debate toward the school setting in ways that can become myopic. Just as focusing blame for these shootings singularly on mental illness takes attention away from the guns themselves, zeroing in on solutions designed for the school setting bypasses the fact that over 90 individuals a day are killed by gun violence, whether intentional or accidental, self-inflicted or other-directed, regardless of setting. We have yet to establish systematic protections around gun storage, and this is reflected in the tragic shootings of thousands of children each year. Toddlers alone were responsible for over 40 accidental shootings in 2017. What is the likelihood that more guns on campus will also increase the prevalence of accidental death even in the best intentioned circumstances?

Educators are already doing so much more than instruction, as they often provide supplemental school supplies and food—particularly in under-resourced schools—and attend to the social and emotional care of students. From our extensive research and practice, we do actually know a great deal about creating optimal environments for learning and academic success. Guns are not part of that equation and have no place in our classrooms. So I’ll be following the lead of our remarkable students in the National School Walk Out today and the March for Our Lives on March 24 to support initiatives to end gun violence.

Michelle Porche, a School of Education clinical associate professor of applied human development, can be reached at mporche@bu.edu. In collaboration with researchers at America’s Promise Alliance, she coauthored a recent analysis of the impact of adversity on young people, titled “Barriers to Success.”

POV: Guns “Have No Place in Our Classrooms”

There are 31 comments on POV: Guns “Have No Place in Our Classrooms”

POV: Guns “Have No Place in Our Classrooms”
31
share this