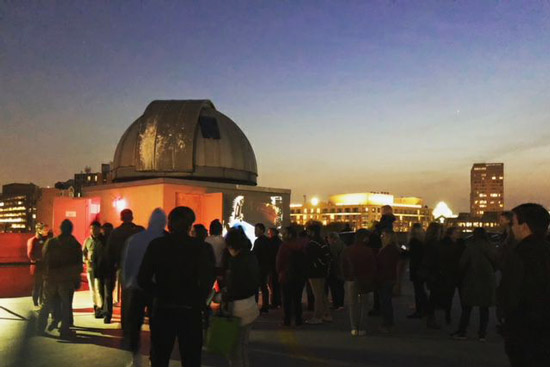 When the museum’s regular hours are over, visitors can head to the Gilliland Observatory to stargaze. Photo courtesy of the Museum of Science

Looking for a starry-eyed start to your weekend? Head over to the Museum of Science tonight for Astronomy After Hours.

Every Friday through October (and Thursdays, too, in July and August), the museum invites the public to view stars, planets, the moon, and other astronomical phenomena from the museum’s Gilliland Observatory, on the roof of the parking garage. And it’s free.

On cloudy or rainy Thursday and Friday summer evenings when you can’t see the stars, you can still take a tour of the observatory and enjoy all kinds of astronomy and space activities and discussions led by the knowledgeable museum staff. The activities are in the Suit/Cabot Laboratory, in the Red Wing lower level. To find out which Astronomy After Hours program is running on a particular night, call the museum’s hotline after 5:30 pm at 617-589-0267.

A note of advice: space in the observatory is limited and the summer months are the busiest time of year, so plan to arrive no later than a half an hour before the program ends to make sure you get a spot in line.

Not able to visit the museum during evening hours? Stop by during the day instead and see some of the fascinating exhibitions currently on display, including Crocs: Ancient Predators in a Modern World, which takes a deep dive into the history of crocodilians.

Astronomy After Hours at the Museum of Science Tonight