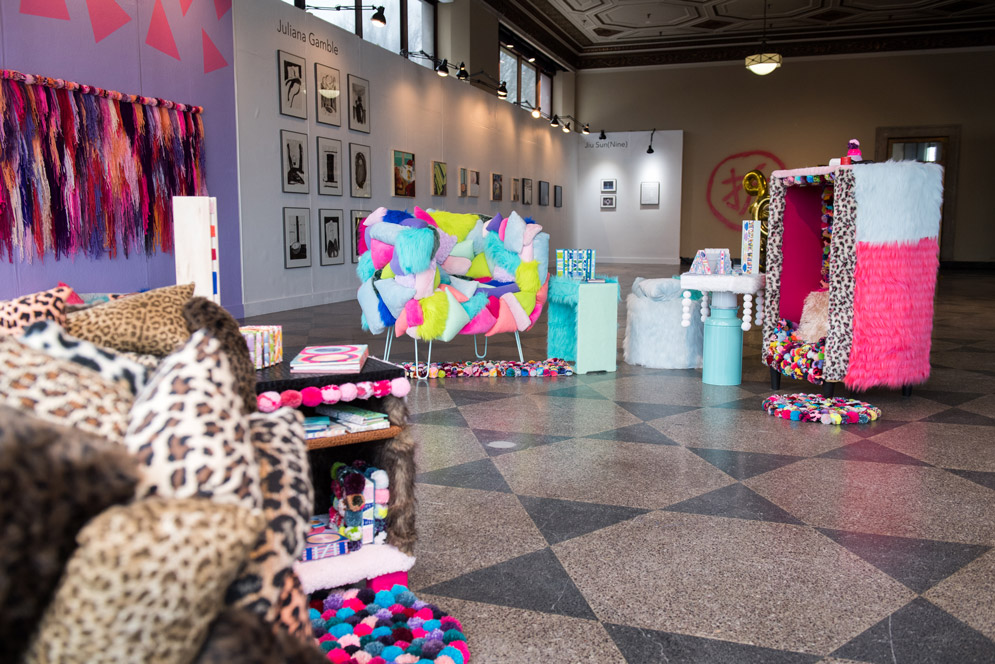 Vibrant and whimsical handmade furniture sculptures by Kelsey Lahey (CFA’18) on view at the 808 Gallery, encourage visitors to reach out, touch, even sit a while.

Peer inside the plate glass windows on the northeastern corner of the 808 Gallery and you’ll see what looks like something out of a Barbie doll’s living room: brilliantly hued furniture covered in pom-poms, plush pillows, faux fur, and leopard prints, combined with wall hangings, prints, textiles, and books. The whimsical, eye-catching sculptures are the work of Kelsey Lahey (CFA’18).

Lahey is one of three dozen College of Fine Arts graduate students, 11 painters, 4 sculptors, and 21 graphic designers, whose work is in the 2018 MFA Thesis Exhibitions, two separate shows on view through April 27. The 808 Gallery hosts the MFA Painting and Sculpture Thesis Exhibition; the Faye G., Jo, and James Stone Gallery the MFA Graphic Design Thesis Exhibition.

Lahey says she got the idea for her thesis project after her father asked her what her sculptures were for, besides being looked at. She began thinking about the connection between fine art and design. The goal was to make something that was interactive. “I wanted everything to be fully functional, comfortable, and begging to be touched,” she says. “I wanted people to be able to touch—and want to touch—everything.”

Every item is made by hand: the wooden frames for the chairs, the tetrahedral pillows sewn onto the furniture, and each of the 2,000-plus pom-poms. The tables are scattered with 63 handbound books of varying sizes, shapes, and colors, each filled with Lahey’s prints, drawings, photographs, even her favorite Dr. Seuss quotes.

Nearby, visitors can enter a cube-like installation designed by Alia Coleman (CFA’18). Inside, six flat-screen TVs play videos of Coleman’s mouth moving, her white teeth bright against her black skin. When you pick up one of the nearby sets of headphones, you can hear her recalling memories, lip-synching hymns, singing Kings of Leon songs.

“I wanted to make a space that was a box with the sounds of my own making about events in my life, my memories of them, and how they contributed to who I am now,” Coleman says, adding that the idea for the cube installations was inspired by Robert Morris’ Box with the Sound of Its Own Making.

Her accompanying artist statement says: “I am interested in black as the absence of colour, black as a non-colour, black as spatial concept, as a symbol, as a material, black as absence and as a weighted presence.” She never explicitly talks about race in her work, but the connotation is unavoidable. “I neither reject nor embrace the subject of race in my work,” she says. “My exploration of black is of the ideological and the psychological…but my blackness inevitably supplants additional content to my work.”

It’s impossible to miss the five enormous paintings by Arden Cone (CFA’18) that line the gallery’s back wall. Each is the artist’s response to the resurfacing of neo-Confederate sentiment in America. Originally from South Carolina, Cone worked for three years as a tour guide in Charleston, educating visitors on the city’s “messed up history,” she says. (Charleston was one of the nation’s major slave ports.) Last summer, as several Southern cities and towns started to remove Confederate monuments, she began to address the subject in her art. Then Charlottesville, Va., decided to remove a statue of Confederate General Robert E. Lee and a gathering by white nationalists turned violent and led to the death of a young woman. Cone says it was strange to suddenly see her theme in the national spotlight. “That sort of fueled me to dig deeper into these monuments and try to think about what to do with them,” she says.

For her thesis project, she painted a series of what she describes as “disposal plans” for Confederate monuments. Each piece started as a maquette: a scale model constructed of everyday materials like bubble wrap, confetti, and aluminum foil. “I wanted to add this weird, whimsical element to my work,” she says. One painting, Sleeping with Fishes, depicts a statue of a man, his head in the embrace of a bright pink octopus. Another, titled General Lee Walks the Plank shows toy soldiers pushing a monument to Lee off the deck of a cardboard 19th-century clipper ship into crinkled-paper waves. “It’s sort of this confusion between child’s play and something very, very serious,” says Cone, “And I’ve realized that I need that sort of levity in my work to keep it from being just absolutely crushing.”

The scale of Cone’s canvases is deliberately large, designed to be like “history paintings,” depictions of historical scenes on a grand scale. Where four of her paintings show Confederate monuments being disposed of in the ocean, the fifth is decidedly different. In it a statue of a blindfolded Lady Justice rises out of the water, holding her sword and scale. It is, Cone says, her own hopeful nod to the future.

In a different vein, a series of paintings by William Karlen (CFA’18), titled Possession pays tribute to friends and family members: each focuses on an object tied to that person. For example, in Blood Gulch, a quartet of PlayStation joysticks are so realistic that they seem to emerge out of their black background. In Dragon Goggles, a bright orange ski mask is suspended against a silvery-gray background. In a third, Vicky’s Recovery, a fencing mask has such minute detail that it’s nearly lifelike.

Karlen says his project explores the question “Who am I?” a question he asked himself when he came to BU. “I started thinking about how I’m defined by my environment and people I know, the people that made me who I am,” he says. “I started thinking about what was similar about those people.” He realized that they all had hobbies and passionate interests, so he asked them for objects related to their interests, then painted them in his studio, making each true to size. “I like the idea of it being familiar in that way,” he says, “because you’re not only seeing a thing you recognize, you’re also seeing it the same size.”

Josephine Halvorson, a CFA professor of art and chair of graduate studies in painting, describes this year’s MFA painting and sculpture graduates as “extraordinary artists, each in their own right. I am extremely pleased with the depth of research, specificity of approach, and independent thinking that every student has cultivated through her or his own artistic practice.”

In the Stone Gallery on the other side of Comm Ave is the Graphic Design MFA Thesis Exhibition. On one wall hang 15 posters by Mark Zhu (CFA’18), part of a series titled Ping Ze. Zhu, who is from Hangzhou, China, says the work was inspired by ci poetry, a type of classical lyrical Chinese poetry associated with the Song Dynasty (960-1279). It plays with the idea that Middle Chinese characters are divided into two groups based on tone: either the character is pronounced with one pitch (ping) or a changing pitch (ze). Ci poetry uses a pattern of tones that has been turned into a template; each template bears a whimsical title, like “Wind Entering the Pine Woods” and “Crane of the Water Dragon.” To compose a ci poem, simply choose one of the patterns and fill in characters with the correct tones and rhymes.

For his thesis, Zhu created posters that visually represent the ping ze patterns using a system of thin gold bars: the open bar means ping, the closed bar means ze, the slashed bar can be either ping or ze, and a thin bar indicates a rhyme. Zhu has overlaid these gold bars with black Chinese calligraphy that spells out the title of each template. The posters are accompanied by a book, bound with the “dragon scale” method used for a short time in China for rhyming dictionaries, containing his historical research.

Zhu says his work “investigates the translation and interpretation between cultures and languages,” and he tries to use typography and calligraphy to “create visual experiences that transcend language barriers,” so viewers glimpse diverse cultures. The goal is to make ci poetry accessible to anyone, “even if they have zero knowledge of the Chinese language.”

For her thesis project, Kristen Mallia (CFA’18) focused on exploring how the ways content is framed and displayed fosters what she describes as “new narrative construction.” Her work is presented in three parts: the installation in the Stone Gallery, an analog book, and a website. At the gallery, a grid of 50 original pencil compositions sealed in plastic baggies hang on the wall alongside four large framed photos of vintage clothing and retail tags, titled Photo Tags. “There’s something playful or humorous to me in having the original artwork bagged up and just pinned up and almost demoted in a way, and having these everyday ephemeral tags blown up to larger than life and then placed in gallery frames on a wall,” Mallia says.

With her work is a computer, allowing viewers to go to her website and scroll through. Her analog book, providing further insight into her thesis explorations with photos and text, is also on display.

Nick Rock, a CFA assistant professor of graphic design, says this year’s class of MFA graphic design students is diverse and ambitious. “We have students making sculptural, experiential installations and students leveraging projection, digital screens, and interaction as well as printed media and moving beyond traditional gallery experiences,” he says. “The quality of the show is a reflection of the unique design culture we are building in our new design studios here at BU.”