“You may not accomplish everything you set out to do, but I guarantee you…you will never fail,” Carmen Yulín Cruz Soto (CAS’84, Hon.’18), told those at BU’s Baccalaureate Service at Marsh Chapel May 20. The mayor of San Juan, P.R., talked about the desperation Puerto Rico faced in the aftermath of Hurricane Maria. Watch the entire speech in the video above. Video by BU Productions

Her voice often cracking with emotion, the mayor of San Juan, P.R., used her BU Baccalaureate address Sunday at Marsh Chapel to take attendees to the ghostly streets of her devastated island, while urging them to raise their voices against injustices.

“There were no cars” immediately after the storm, Cruz said from the Marsh pulpit, “no people in the street, no dogs barking, and no music playing.…Just a deafening silence.”

Cruz told of spending a night with 685 homeless people in Puerto Rico’s largest emergency shelter. Without naming Trump or island officials who neglected serious review of emergency response plan updates, she said that “rather than leadership at the highest places, we faced a general lack of urgency and a dismissive attitude.

“Those charged with coming to our aid failed us,” she said. “We were dying, and they were killing us with bureaucracy.” Her pleas for help, however, galvanized others globally, including the Puerto Rican diaspora. “Boy, did they listen,” she added, coming forth with aid.

Cruz exhorted her listeners to raise their voices against other injustices in the headlines. Acknowledging in the audience Sunday’s Commencement speaker, US Representative John Lewis (Hon.’18) (D-Ga.), a veteran of the Civil Rights Movement, she said, “You may not accomplish everything you set out to do, but I guarantee you, as Congressman Lewis knows all too well, you will never fail.”

“If you believe that children everywhere have the right to schools without gun violence,” she said, just two days after yet another school shooting by a student who killed 10 in Santa Fe, Tex., “you must demand that sensible gun control laws are enacted.”

On immigration, Cruz urged activism “if you believe in keeping families together rather than tearing them apart.” (The Trump administration has separated hundreds of children from migrant families entering the country.) In this #MeToo era, she also denounced the fact that many women are “forced and harassed to endure unwelcome advances.” 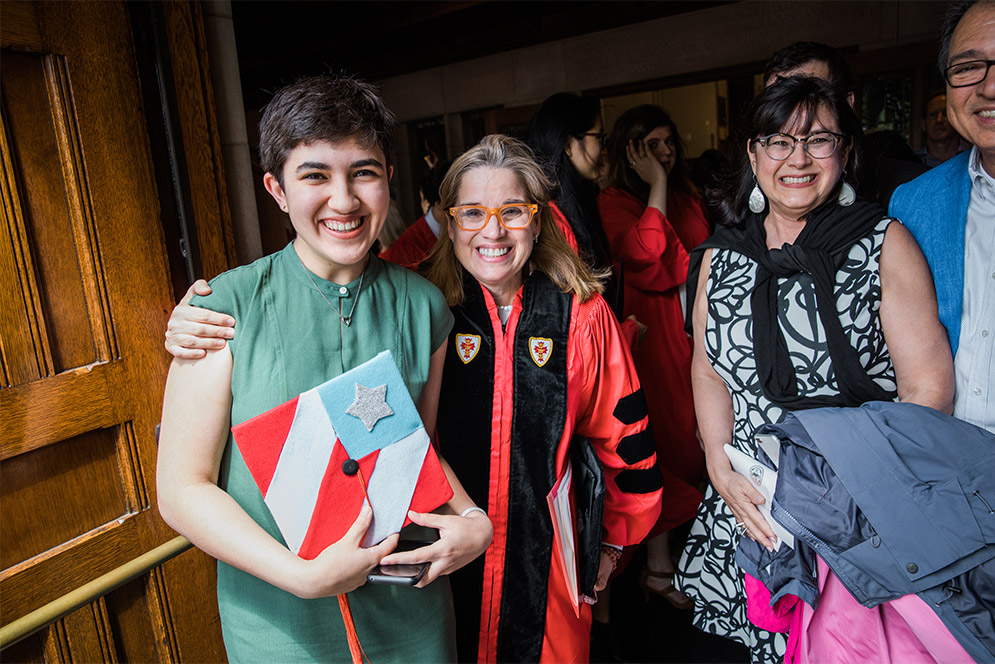 Laura Torres (ENG’18), her mortarboard decorated as the flag of Puerto Rico, with Cruz.

Cruz’s Baccalaureate talk before a packed Marsh Chapel audience earned a standing ovation and came just two weeks before the start of this year’s hurricane season, with Puerto Rico’s government vowing it won’t be caught flat-footed again with its emergency planning. At least 150,000 residents still await the return of electricity service and insurance payments for their destroyed homes.

The Rev. Robert A. Hill, Marsh Chapel dean, introduced Cruz as “an advocate for immigrants, the LGBTQ community, the deaf community, children…and those that struggle with gender-based violence.”

In a prayer of optimism similar to Cruz’s address, Brother Lawrence Whitney (STH’09,’18), University chaplain for community life, quoted a famous line from Martin Luther King, Jr. (GRS’55, Hon.’59): “The moral arc of the universe is long, but it bends toward justice.”

Cruz’s speech was part of the chapel’s regular Sunday service and was accompanied by scripture readings that reflected the occasion: graduates about to take leave of their alma mater.

Jean Morrison, University provost, read Ecclesiastes’ famous reminder that such transitions are part of the cycle of life: “To every thing there is a season, and a time for every purpose under the heaven…a time to cast away stones, and a time to gather stones together…”

Robert A. Brown, BU president, reading from St. Paul’s Letter to the Romans, offered departing Terriers the apostle’s exhortation to exceed others’ expectations: “Do not be conformed to this world, but be transformed by the renewing of your minds, so that you may discern what is the will of God—what is good and acceptable and perfect.”

At BU’s 145th Commencement at Nickerson Field on Sunday afternoon, Cruz, one of five honorary degree recipients, received a Doctor of Laws.

Mayor of San Juan: What Will You Do in a Moral Crisis?

There is 1 comment on Mayor of San Juan: What Will You Do in a Moral Crisis?

Mayor of San Juan: What Will You Do in a Moral Crisis?
1
share this