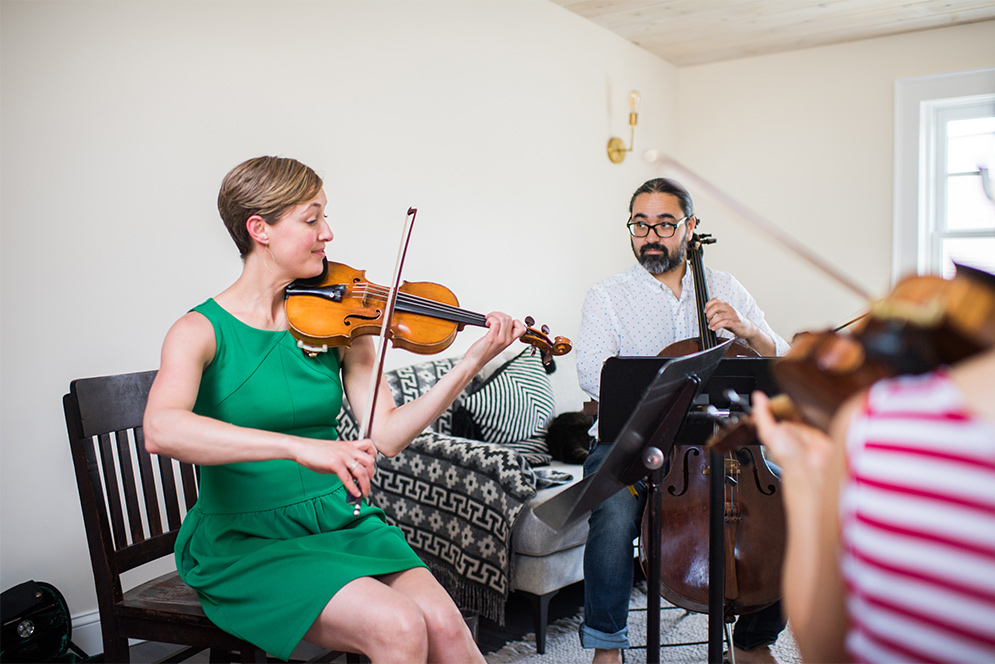 While most Americans will spend July 4 relaxing at parties and barbecues, Sasha Callahan and Leo Eguchi will head off to work on the Charles River Esplanade. It’s what you do when you’re musicians with the Boston Pops.

The Boston Pops July 4 Fireworks Spectacular is one of the most important events of the year for violinist Callahan and cellist Eguchi (CFA’02), a married couple who don’t at all mind trading sandals and shorts for formal wear and Tchaikovsky.

“You give yourself over to this bigger thing,” Eguchi says. “When you’re at the Hatch Shell and you look out and you can’t see the end of the people, the crowd literally keeps going and going, it’s pretty exciting.”

The annual concert draws more than a half million people to the shores of the Charles River for the ultimate mash-up of classical and contemporary music, with the Pops playing classics like the 1812 Overture and performances this year by pop singer-songwriter Rachel Platten, the Indigo Girls, and Broadway, film, and TV star Rita Moreno.

Even for seasoned performers like Callahan and Eguchi, who have played in about a dozen July 4 Pops concerts, it’s a thrill to perform with musicians that include members of the Boston Symphony Orchestra, led by Pops conductor Keith Lockhart (Hon.’04).

In addition to appearances with the Pops in Boston, Nantucket, and Tanglewood, the two also manage a whirlwind schedule of evening and matinee engagements with the Boston Ballet, the Boston Lyric Opera, and symphonies from Rhode Island to Oregon. Eguchi played in nearly 40 Nutcracker performances this year alone. Callahan played in dozens of concerts this year, and devoted countless hours to practicing and working with two chamber music groups that she and Eguchi founded.

“You can’t really get good at an instrument if you’re not willing to spend many hours by yourself working on it,” Callahan says. “But very, very few people perform by themselves only as soloists. So you find a balance.”

Music brought the couple together at BU nearly two decades ago, when they enrolled in the College of Fine Arts master of music program for string instrument players. Callahan, who has played the violin since she was three years old, earned a bachelor’s in violin performance at Rice University. She says she was particularly interested in studying under Boston Symphony Orchestra member Lucia Lin, a CFA associate professor of music and a violinist with the University’s Grammy-winning Muir String Quartet.

Eguchi came to BU from the University of Michigan with a dual degree in music performance and physics. He contemplated a career in science, but struggled with imagining a life outside of music. At BU, he received the string department award for excellence.

Callahan and Eguchi met at a BU Symphony Orchestra rehearsal. Eguchi recalls that when he introduced himself to Callahan after seeing her at a practice, “The violins actually swelled in the background.”

At least for him.

Callahan, who attended BU for a year, was dating another cellist at the time. It wasn’t until nearly two years later that their friendship became something deeper.

In the years since then, they have made Boston their home and are raising a daughter, Freya. Eguchi has performed on several Grammy-nominated recordings and worked as an artist-in-residence at Boston’s First Church and in Kabul, Afghanistan. An advocate for new music, he has worked with such notable composers as William Bolcom, Lukas Foss (Hon.’03), a former CFA professor of music, and Joan Tower, and shared the Pops’ stage with many stars outside the classical world, among them Pete Townsend, Melissa Etheridge, and Billy Idol. He also works as a cello instructor.

Callahan and Eguchi also played together in the orchestra for the American Repertory Theater’s sold-out revival of Porgy and Bess. She has also performed as a soloist at the National Cathedral in Washington, D.C. She is also a member of the Portland (Maine) Symphony, the Rhode Island Philharmonic, the Boston Modern Orchestra Project, and the Boston Landmarks Orchestra, among others.

Lin, Callahan’s mentor, says the couple’s scope is amazing. “They perform in major orchestras in New England, they perform as soloists, they are committed teachers, and they have created two organizations, the Sheffield Chamber Players and the Willamette Valley Chamber Music Festival,” she says. “I admire their dedication to their craft, the quality they produce in all aspects of their music-making, and the thoughtfulness they apply to music.”

It’s the kind of work that blurs work  and home life, Eguchi says. In their living room, for example, reside three large cellos. Nearby is a practice room, where the Sheffield Chamber Players meet for practice. Steeped in a love of music, their daughter Freya also plays the cello, an instrument she requested.

Three years ago, the two also spearheaded the creation of the Willamette Valley Chamber Music Festival, a celebration of string music and wine over three weekends in Oregon. The festival includes chamber music concerts held in area wineries and additional family, youth, and educational outreach activities. The winery sessions sparked the inspiration for a CD of music they performed in a winery’s barrel room at the festival. Newly released, the couple has launched a public fundraising campaign on GoFundMe.com. The disc will premier pieces written by Gabriela Lena Frank, one of the nation’s top female composers.

Callahan says it was one of the most challenging and gratifying violin projects she has undertaken. Rehearsals had to wait until the winery was closed for business, so sessions began at 4 pm and often ended after midnight in the barrel room, which was 58 degrees and required space heaters. Eight hours of playing made their fingers feel like jelly, but Callahan says she’s very proud of the result.

“I love the diversity of what we do, that we play in so many different kinds of groups,” Callahan says. “But there’s really special communication that happens with a small group of performers.”

It also contrasts sharply with the couple’s July 4 work. They will play in a dress rehearsal concert at the Hatch Shell that’s open to the public on Tuesday, July 3, at 8 pm. Then on Wednesday, July 4, busloads of Pops musicians will be escorted by state police, lights blazing, along a closed Storrow Drive, to the Hatch Shell. 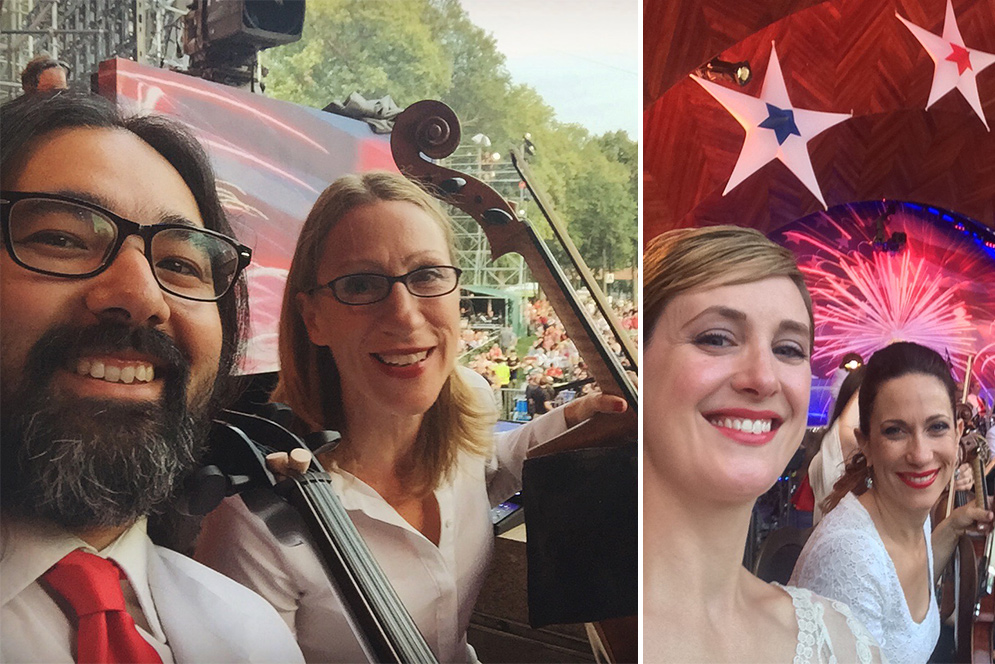 Selfies the couple took last year on July 4 on the Hatch Shell stage. Photos courtesy of Callahan and Eguchi

Performing intensely for two hours, amid all sorts of distractions, from bugs to breezes that blow sheet music away, they say they will feed off the excitement of the performers and the crowd. Then a bus will take them back to Symphony Hall as the fireworks explode in the sky.

“It’s probably the most diverse crowd that we play for, because it’s a night that means so many different things to so many people,” Callahan says. “That makes it fun.”

The 45th annual Boston Pops Fireworks Spectacular concert on Wednesday, July 4, is free and open to the public; it begins at 8 pm, with fireworks at 10:30 pm, at the Hatch Shell, 47 David G. Mugar Way. Note: plan to arrive early, as gates open at 9 am and are expected to fill by early afternoon. Security will be tight; find a list of banned and allowable items and other security details here. The Tuesday dress rehearsal concert is also at 8 pm and open to the public.

Married to Their Music

There are 2 comments on Married to Their Music