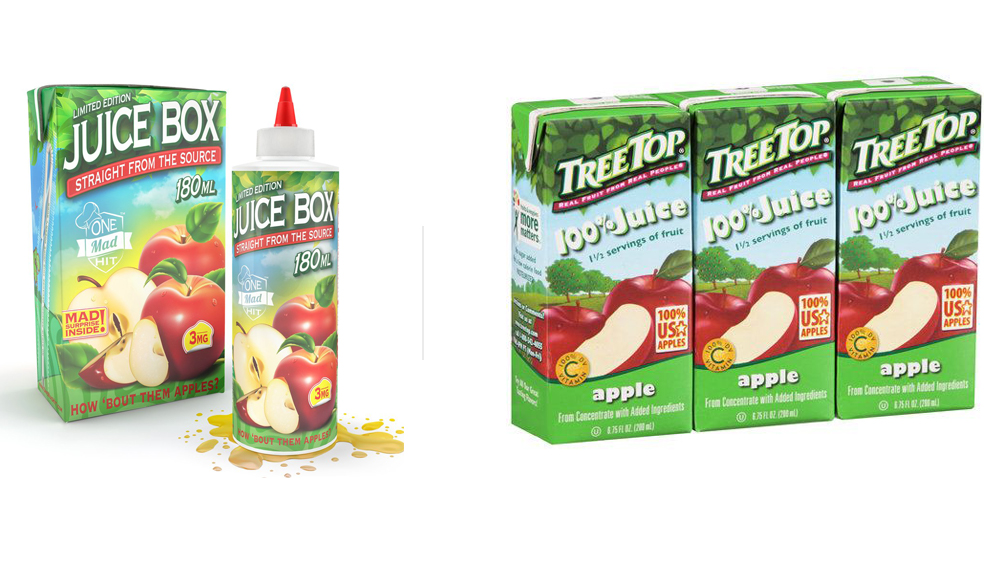 An old skit on Saturday Night Live featured a toymaker cheerfully selling dangerous products like “Johnny Switchblade Adventure Punk” (with tiny knives popping out of the doll). Federal regulators have accused the vaping industry of tweaking the tactic, charging that they’re peddling liquid nicotine in packages that resemble kids’ juice boxes, which has led to children chugging the drug.

One brand, the Twirly Pop, even comes with a lollipop. Other products, like One Mad Hit Juice Box and Vape Heads Sour Smurf Sauce, look like candy or juice. The government recently sent warning letters to a baker’s dozen of vaping product manufacturers and sellers, charging them to cease and desist this kind of packaging.

USA Today recently reported more than 8,200 instances of children under six being exposed to liquid nicotine and e-cigarettes between January 2012 and April of last year. While no deaths have been reported, experts say that downing a small amount of liquid nicotine could cause cardiac arrest, respiratory failure, seizure, or coma.

The government’s shot across the bow is the latest bad PR for the vaping industry. Worried about illegal sales to minors, the Food and Drug Administration (FDA) had announced a sting operation to catch retailers—from online sellers to gas stations and convenience stores—peddling what has been dubbed the “iPhone of e-cigs,” Juuls, to underage buyers. (Juuls have been brought to school by students nationwide who are lured by their concealability—they emit little flume—and their fruit and other flavoring.)

Siegel: Yes. I can see how a child or a parent could be easily confused. I would fully expect these companies to comply, because failure to comply could mean the removal of their products from the market.

Do you think packaging that looks like kids’ food containers was simply a blunder by the manufacturers or was it more deliberate?

I do not understand how something like this could happen. It seems pretty obvious that the package was specifically designed to look like a children’s fruit juice drink. It was certainly a blunder, but how it could have happened is not clear to me. However, there is no reason for a product with this packaging to be on the market. Why even take a chance?

You’ve objected to an FDA rule that prohibits e-cigarette makers from changing their products without FDA approval. Will that regulation be an obstacle to changing the packaging design?

Strictly speaking, the company cannot change its product design without FDA approval. However, since it is the FDA ordering the change, it essentially has approval. But this demonstrates the problem with the FDA regulations.

Has the FDA rule continued to impede improvements in e-cigarettes, such as preventing their batteries from exploding?

Yes, the FDA rule has impeded improvements, as companies are stuck with the status quo and cannot make improvements unless they submit complex, expensive, and burdensome applications.

NPR reported last month that vaping is a “gateway” to traditional cigarettes and researchers increasingly find the same health detriments from both. Is it time to declare vaping hazardous to your health, and like smoking, try to stamp it out?

I also do not believe that there is evidence showing that the health effects of vaping are the same as those of smoking. I think there is strong evidence that vaping is much safer than smoking and that even if there are effects from long-term vaping, they are certainly less serious than with smoking.