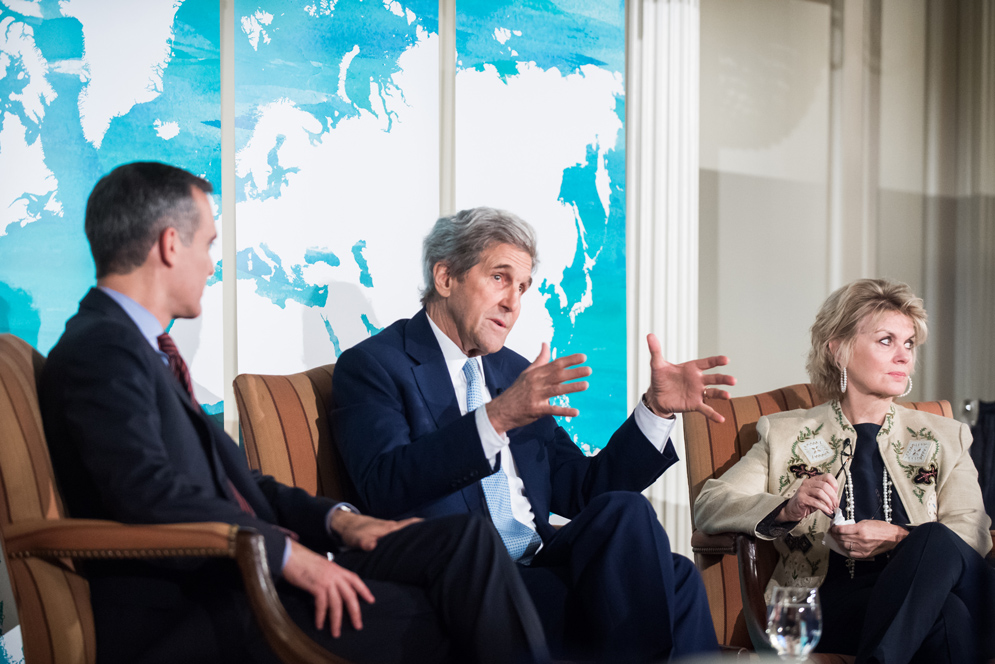 Second, the renewables future would come even sooner, averting possible disaster, if only President Trump weren’t AWOL on the issue.

Boston Mayor Martin J. Walsh convened the roughly 150 participants, including two dozen fellow mayors, after learning that the Trump State Department would not sponsor the summit, the third of its kind.

Thursday’s gathering came a year after the president announced he’d withdraw the United States from the 2015 Paris climate accord, declaring it imposed unaffordable costs on the US economy—an assertion that had “misled the world,” said Kerry, who helped negotiate the original accord.

“There is no burden placed on us by any other nation or by Paris itself,” Kerry told the summiteers, noting that each country drafted its own plan against climate change, with costs to its economy in mind.

The Paris signatories knew government actions under the accord wouldn’t hold global temperatures to the 2 degrees Celsius rise that advocates say is needed, Kerry said. Instead, the deal was a “bet” that with almost 200 nations demanding clean energy, “we were going to ignite the private sector, because all of a sudden, we had created the largest single market the world had seen.”

He unspooled statistics to prove that that bet paid off more than people realize: $358 billion invested in sustainable energy in the year after the deal was inked; 75 percent of newly generated electricity in the US last year coming from solar power; and coal, a fossil fuel, responsible for a scant fraction of new American power generation last year.

Even so, “we are woefully behind where we need to be,” Kerry said, with the global temperature rise projected to be 3 degrees by mid-century and 4 degrees by century’s end.

He lauded efforts by US mayors, business, and states—almost 40 of which have legislated required or voluntary use of renewables. “While Donald Trump may have said he is out of Paris, the American people have stated unequivocally they are in Paris, and they’re going to meet the Paris standards.”

Cleveland, a College of Arts & Sciences professor of earth and environment, participated in a panel on sustainable energy. He said the popular notion that renewable energy, like solar and wind power, costs more than fossil fuels is, “in the case of electricity generation…flat-out false.”

Onshore wind power, even without government subsidies, he said, is cheaper than natural gas (which is currently the bargain-basement fossil fuel). And “solar is close” to as good a deal, Cleveland said. “The market has already demonstrated that these renewables are cost-competitive—and they’re way cheaper than coal.”

He recalled comforting a student the day after Trump’s election who asked, “Did I choose the wrong major?” Actually, both young people and the mayors are committed to addressing climate change, Cleveland said. “The federal government is not all government, and government is not the only agent of change in society.”

BU President Robert A. Brown struck a similar note in opening the summit, noting that the University’s Climate Action Plan aims for zero carbon emissions on the two campuses by 2040 and will spend $141 million over a decade on capital improvements.

“BU has skin in the game, as do all of you,” Brown said, noting that half of the globe’s people are dwelling in cities, a percentage that will rise. “Sustainable urban development will be key to mitigating climate change.”

“BU has an important stake in this challenge,” he added. “We are at the center of the city.”

Walsh used the summit to announce his city would band with half a dozen others—including Los Angeles, the US’ second-largest city; Chicago, the third-largest; and Houston, the fourth—to measure their energy demand and ask renewable energy developers to price the cost of meeting it.

Walsh said he hoped more cities would join the group, allowing the consortium to approach energy developers later this summer.

American mayors came to the summit from as far away as Honolulu, Los Angeles, Salt Lake City, and Houston. A half dozen hailed from France, Canada, England, and China, lacing the proceedings with an international flair, as when Roland Ries, mayor of Strasbourg, France, delivered his remarks in his native language. (Attendees listened to a translator on hand-held devices.)

“That’s one of the reasons we’re here, to steal ideas,” he said, adding, with British politeness, “I hope you don’t mind.”

There are 3 comments on Fixing Climate Change Is Good Business, Whatever President Trump Says