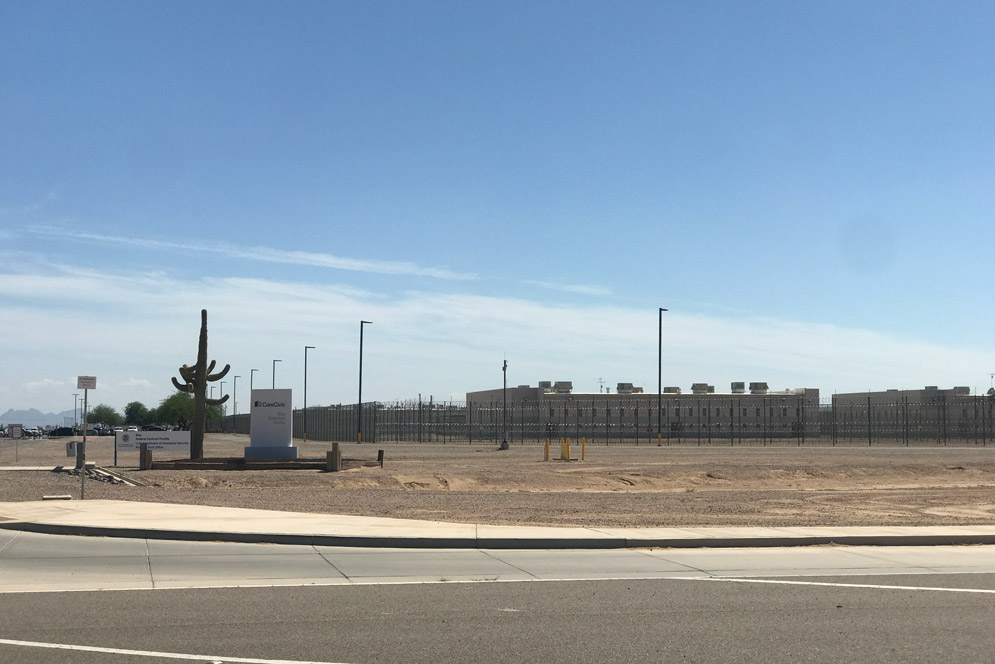 BU students and faculty traveled to Arizona at the end of August and met with immigrant detainees at the Eloy Detention Center, one of numerous detention facilities run by the Department of Homeland Security US Immigration and Customs Enforcement. Photos by Sarah Sherman-Stokes

This past summer was a devastating time for immigrant families trying to enter the United States—parents were criminally prosecuted at the border, and children, some as young as five months old, were forcibly separated from their mothers and fathers. The federal government had no plan to reunite these families, many who came seeking asylum or other protection in the United States after fleeing horrific violence and poverty in their home countries.

As the crisis was playing out on the US-Mexico border, School of Law students conceived the idea of a group of them traveling to Arizona to provide legal and social work support where needed.

With the generous support of the School of Law and the School of Social Work, a plan came together to send faculty from both schools, along with four law students and one master’s level social work student to Arizona for a week to volunteer with the Florence Immigrant & Refugee Project, the sole legal service provider for more than 5,000 immigrant detainees statewide. At the height of the family separation crisis, approximately 328 separated children were living in shelters and detention centers across Arizona.

The crisis that came to a head along the southern border did not begin with this summer’s family separation policy—immigrant families have been separated by virulent detention deportation policies for over a century—but the devastating realities faced by immigrant communities there were certainly exacerbated by this summer’s events. Notably, noncitizens facing deportation from the United States, including infants and toddlers, are not provided government attorneys to represent them. And although the staff of the Florence Project have been working tirelessly to support immigrant families, they simply are unable to meet the huge demand for services.

Before our group headed out to Arizona on Sunday, August 26, both students and faculty had to become familiar with issues related to detention, asylum, and special protections for immigrant children, as well as the impact of trauma on both our clients, and potentially, ourselves. For two days, the students, all Spanish speakers, sat in a classroom learning about law and trauma. Each was asked to share a word or two about how they were feeling about the trip we were soon to embark on.

We set to work the morning after we arrived in Phoenix. The Florence Project staff quickly brought us up to speed on the family separation crisis unfolding in Arizona, the ongoing realities of mass detention and deportation there, and the kinds of clients and cases we might encounter. We sat in on lawyer team meetings and case rounds, getting a sense of how this intrepid staff triages the enormous volume of compelling cases they face on any given day.

On Tuesday, we headed south to the Eloy Federal Contract Facility, an US Immigration and Customs Enforcement (ICE) Detention Center in Eloy, Ariz. The day we visited, the facility housed 1,397 immigrant detainees, including men and women, the mentally and physically ill, and survivors of torture and trauma. There, among others, we met with two fathers separated from their children at the border; political activists who had fled torture in their home countries; and longtime US residents, community volunteers with steady jobs and families, who had been arrested and detained by immigration authorities. The common denominator? All were facing deportation.

On Wednesday and Thursday, we traveled to two children’s shelters, one in Mesa and the other in Phoenix, to provide know-your-rights presentations and intake to boys and girls, including a six-year-old child who could express nothing more than his name, and by a show of his fingers, his age. The Florence Project staff surmised that he had been recently separated from his parent at the border. In between explaining to the children what judges and court proceeding were, and that if they were released, they must go to court or risk a deportation order, we played tic-tac-toe and made paper boats from our legal pads.

The children’s stories were heartbreaking. Many of them had fled gang violence or family violence, many had been abandoned by one parent or raised by grandmothers. Many had been forced to leave school at a young age as the result of poverty and violence. Struggling to help support their families, they had worked on coffee and banana plantations before heading north. Although each of their stories was different, for all of them, the decision to migrate to the United States in search of safety and a better future was born of desperation—the only choice they, or their families, believed they had.

We concluded our week in Arizona at the Florence Project offices, interviewing children who had been released from immigration custody to help them pursue claims for legal relief in the United States, and meeting again with lawyers to discuss taking and placing their cases for pro bono representation. Our students had identified forms of legal relief that may be available to the clients they had interviewed, and they presented their cases. We also sat in on day three of the trial of a former staff member of the Mesa children’s shelter, now charged with sexually assaulting multiple children at the shelter. The case underscored for us the tremendous vulnerability of children placed in government custody.

Just before we left Arizona, we had dinner with Florence Project staff. We asked what they would like us to do with the experience and exposure we’d had. Their request was simple: tell these stories. The family separation crisis has been devastating and continues to deeply impact families and communities across Arizona and nationwide. But in addition to that crisis, Arizona faces a continuing nightmare of children and adults who need legal representation, advocacy, and relief from deportation in a particularly inhospitable climate. One immigration judge in Eloy has a denial rate of more than 96 percent, another nearly 94 percent.

Now that we are back in Boston, we have committed to continuing to tell these stories. We’ll be accepting cases referred from the Florence Project into our clinical programs, as well as working remotely on research and writing projects to benefit the project’s clients.

Our trip to Arizona was just the beginning of what we intend to be an ongoing conversation—and partnership.

Sarah Sherman-Stokes, a School of Law clinical instructor and associate director of the Immigrants’ Rights and Human Trafficking Program, can be reached at sstokes@bu.edu.

There are 4 comments on BU Works to Reunite Immigrant Families