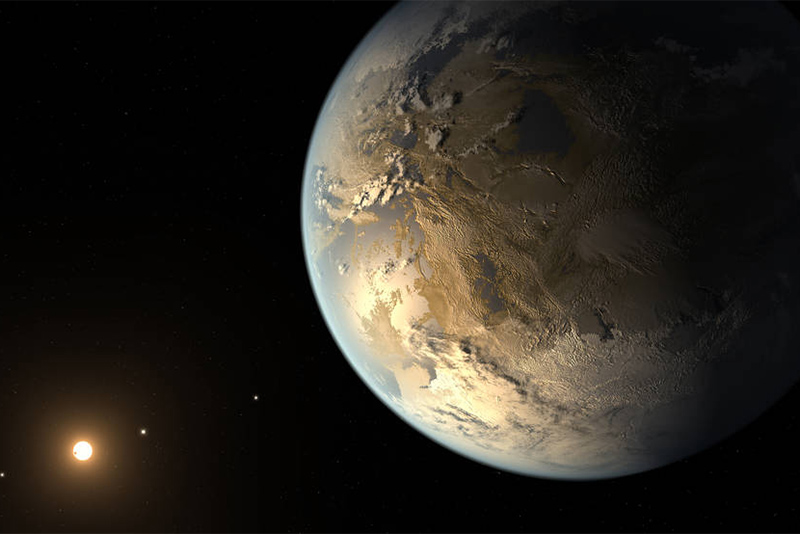 The search for extraterrestrial life has focused mostly on exoplanets like Kepler-186f, shown here, which circle M-class stars in a “habitable zone” where water may exist. But “not all habitable zones are created equal,” says Mendillo, who notes that some exoplanets are dangerously close to their stars, exposing them to hazardous radiation that might prevent life as we know it. “Earth’s habitable zone has a little more hospitality.” Photo credit NASA Ames/SETI Institute/JPL-Caltech

On January 9, 1992, astronomers announced a momentous discovery: two planets orbiting a pulsar 2,300 light years from our sun. The two planets, later named Poltergeist and Draugr, were the first confirmed “exoplanets”—worlds outside our solar system, circling a distant star. Scientists now know of 3,728 (confirmed) exoplanets in 2,794 systems, each one begging the question: “Is anyone else out there?”

“What more important question could we ask? Are we alone?” asks Boston University professor of astronomy Michael Mendillo. “I don’t know of any more fascinating question in science.”

For decades, astronomers have been searching these distant exoplanets for signs of life, mostly looking for that most essential molecule, water. But Mendillo and his colleagues have a different idea. In a paper published in Nature Astronomy on February 12, 2018, Mendillo, BU associate professor of astronomy Paul Withers, and PhD candidate Paul Dalba (GRS’18) suggest looking instead at an exoplanet’s ionosphere, the thin uppermost layer of atmosphere, which is whizzing with charged particles. Find one like Earth’s, they say, packed with single oxygen ions, and you have found life. Or, at least, life as we know it.

“Throughout the history of human civilization, we have never gotten to the point—until basically the last 15 years—where we could see planets around other stars. And now we’re at the point where we’re coming up with ideas to discover life outside Earth,” says John Clarke, professor of astronomy at Boston University, and director of the Center for Space Physics. “This is a great intellectual adventure that we’re on.”

Their work began when Mendillo and Withers received a grant from the National Science Foundation (NSF) to compare all planetary ionospheres in the solar system. (All the planets have them except Mercury, which is so close to the sun that its atmosphere is stripped off entirely.) Simultaneously, the team was also working with NASA’s MAVEN mission, trying to understand how the molecules that made up Mars’ ionosphere had escaped that planet. Since the early years of the Space Age, scientists have known that planetary ionospheres differ greatly, and the BU team started to focus on why that was the case, and why Earth’s was so different. While other planets stuff their ionospheres full of complicated charged molecules arising from carbon dioxide or hydrogen, Earth keeps it simple, with mostly oxygen filling the space. And it’s a specific type of oxygen—single atoms with a positive charge.

“I started thinking, how come our ionosphere is different than the other six?” recalls Mendillo.

The team ticked off numerous possibilities for Earth’s high concentration of O+ before settling on a culprit: green plants and algae.

“It’s because we have this atomic oxygen that traces its origin back to photosynthesis,” says Mendillo. “We have atomic oxygen ions, O+, in the ionosphere as a direct consequence of having life on the planet. So why don’t we see if we can come up with a criterion where the ionosphere could be a biomarker, not just of possible life but of actual life.”

Most planets in our solar system have some oxygen in their lower atmospheres, but Earth has much more, about 21 percent. This is because so many organisms have been busy turning light, water, and carbon dioxide into sugar and oxygen—the process called photosynthesis—for the past 3.8 billion years.

“Destroy all the plants on Earth and our atmosphere’s oxygen will vanish away in mere thousands of years,” says Withers, who notes that all this oxygen exhaled by plants doesn’t just stick around the Earth’s surface. “To most people, O2, the oxygen we breathe, is not a very exciting molecule. To chemists, however, O2 is a wild, exhilarating, and perilous beast. It just will not sit still; it chemically reacts with almost any other molecule it can find and it does so very quickly.”

On Earth today, excess oxygen molecules, in the form of O2, float upward. When the O2 gets about 150 kilometers above the Earth’s surface, ultraviolet light splits it in two. The single oxygen atoms float higher, into the ionosphere, where more ultraviolet light and x-rays from the sun rip electrons from their outer shells, leaving charged oxygen zipping through the air. The abundance of O2 near the Earth’s surface—so different than the other planets—leads to an abundance of O+ high in the sky.

This finding, says Mendillo, suggests that scientists seeking extraterrestrial life could perhaps narrow their search area. Paul Dalba, who was working on exoplanet atmospheres with BU assistant professor of astronomy Philip Muirhead, joined the team to weigh in. “Dalba’s knowledge of star-exoplanet systems really helped,” Mendillo says. Currently, most scientists on this quest focus on M-class stars—the most abundant in the galaxy—and the planets circling them in the “habitable zone,” where water might exist.

This makes sense, because life as we know it needs water. But scientists don’t know exactly how much water a planet needs to support life. “If we only had the Mediterranean, would that have been enough? Do we need the Pacific, but not the Atlantic?” asks Mendillo. “If you look at the ionosphere, you don’t need to know the number. You just need to know that if the maximum electron density is associated with oxygen ions, then you’ve nailed it—you’ve got a planet where there’s photosynthesis and life.”

Of course, this assumes that “life” is at least somewhat analogous to life on Earth, which requires not only water and oxygen, but also a certain temperature range, probably a magnetic field, and other factors. “That’s a good starting point,” says Clarke. “But in the back of our mind, we are all aware that there may be kinds of life we’re not thinking about that may surprise us.”

There’s one other catch, at least for now: scientists don’t have the tools to detect an ionosphere on any exoplanet—yet. “If you look at the space telescopes that might come next, a lot is going to be possible,” says Clarke. “I think in ten years we will have the technology to do this experiment.”

Mendillo hopes his team’s work makes a case for further research, development, and exploration in this area. “Just the idea of using the ionosphere as a signature is a captivating idea,” he says. “We don’t have the observational capability yet, but I’m optimistic. We offer this up as a challenge.”

There are 2 comments on Looking for Extraterrestrial Life? Here’s a New Target

Looking for Extraterrestrial Life? Here’s a New Target
2
share this