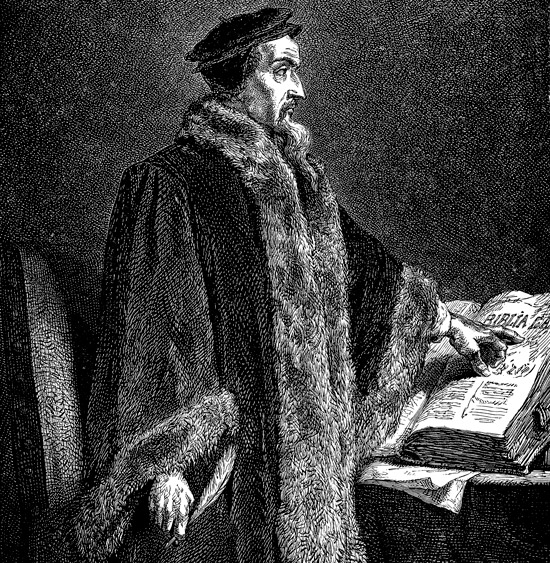 Citing these news stories, psychologist Steven Sandage asks, “How can some people take positions that seem to minimize the problem of domestic violence?” The Albert and Jessie Danielsen Professor of Psychology of Religion and Theology and research director at BU’s Danielsen Institute, Sandage thinks he’s found one answer outside of politics: religion sometimes justifies or rationalizes violence against women.

In particular, he says, that attitude is a danger in Calvinism, a word that may conjure notions of a God who preordains every human for salvation or hell, unalterably, before time began. But Calvinism—“a theology that makes Pat Robertson seem warm and fuzzy,” according to one writer—is enjoying a resurgence.

John Calvin (1509-64) taught that people lost their free will because of original sin, leaving it to God to determine everything in life, including who suffers and from what. Calvin specifically suggested that the Almighty programmed humanity for spouse battering, writing that a wife must “bear with patience the cross which God has seen fit to place upon her.” He taught, Sandage says, that wives “were not allowed to leave their husbands when beaten.”

Sandage says many of his Calvinist clients derive “a very clear social and moral structure” from their worldview.

In several recent research projects with colleagues at BU and elsewhere, he has explored aspects of Calvinism, including “domestic violence myth acceptance.” Domestic violence myths are beliefs “that function to rationalize, justify, and/or perpetuate men’s violence against women,” in the words of one study, published in the Journal of Psychology and Spirituality.

For that study, the researchers had 238 seminary students complete an online survey, probing for correlations between their theological beliefs and ideologies about gender, hierarchical relationships, and belief in God’s control and protection of them. The students were from Minnesota’s Bethel Seminary, an evangelical Protestant school where Sandage once taught.

Sandage summarizes the upshot of his research: “Many Christian theologies emphasize the possibility of finding meaning in suffering, but the New Calvinism seems to promote a rather stoic and un-empathic attitude that valorizes suffering, particularly among women.… Calvinist beliefs were related to higher levels of domestic violence myth acceptance and lower levels of social justice commitment.”

In the Calvinist view, “God causes all things, including hierarchical social structures and all suffering,” he says. “Domination by the powerful,” be it God or men, “is just and appropriate, and submission to suffering by the less powerful is virtuous and redemptive.”

He doesn’t contend that all people embracing Calvinism endorse domestic violence myths: “There are many contemporary Calvinists who hold progressive views of gender and other social issues. But our research does offer some data suggesting the ‘New Calvinism’ that combines Calvinistic beliefs and very conservative, binary views of gender may be a kind of theological risk factor for the acceptance of domestic violence myths and other socially regressive attitudes.”

Indeed, evangelical seminary students who believe that humans have some free will “do not show this pattern,” he says.

Scot McKnight, a professor of New Testament at Northern Seminary in Illinois, lauds Sandage’s research for drawing “accurate and helpful correlations that ought to awaken more theologians and pastors to the implications” of their theology.

If the woman’s life doesn’t appear in imminent danger, Piper argued, “then I think she endures verbal abuse for a season…she endures perhaps being smacked one night, and then she seeks help from the church…[which must] step in, be her strength, and say to him, ‘No, you can’t do this.’” (He later clarified his remarks, saying that “recourse to civil authorities may be the right thing for an abused wife to do.”)

Studying the attitudes of seminary students, the church leaders of the future, is especially important, Sandage says, because clergy are the most sought-out professionals for marriage and family counseling—even though many lack appropriate training. He recalls a pastor in one of his classes at another seminary who refused to counsel wives without their husbands present, having “never considered whether that might limit their freedom to report domestic violence.”

“We need to educate religious leaders on the realities of domestic and intimate partner violence,” Sandage says.

Shelly Rambo, an STH associate professor of theology, and Kristen Hydinger (STH’15) were coresearchers on one of Sandage’s studies.

There are 6 comments on Does God Ordain Domestic Violence?