In the video above, Darcy Gould, BU Athletics associate strength and conditioning coach, discusses how she trains athletes to perform at their highest levels.

The players wear monitors beaming data to Gould’s computer screen on the sidelines. Color-coded boxes on the screen display each athlete’s heart rate. Gould tracks how much of their maximum heart rate they’re using and how long it takes them to return to normal. While watching the screen, she also observes the players, looking for things that could cause pain, like bad posture. (Strength coaches compulsively spy on humans’ movement, Gould says, “whether we’re at the airport watching people walk by waiting for our flight or we’re watching our team.”)

Gould, who holds a master’s degree in kinesiology and sports performance, must not only make players stronger and faster, but keep them injury-free. At game’s end, she gets a readout of each player’s data to study, allowing her to compare the intensity of different games and the effects of practices on players’ performance.

Brian Durocher (SED’78), women’s ice hockey head coach, dubs Gould “the heavy” of BU Athletics for her eagle-eye on all the details of honing bodies into peak-performance machines. (She also trains the women’s softball, lacrosse, and lightweight rowing teams.)

Fewer than 200 of the nation’s 2,500 collegiate strength and conditioning coaches have received master’s certification from the Collegiate Strength and Conditioning Coaches Association (CSCCa). Gould is one of them. Durocher says she supplements the lifting and other basics of strength training with “yoga, breathing, core balance, and heart-rate recovery that have assisted everyone” on his team. “She is also a student of her profession and seeks out educational information that will keep her at the top of her game.”

“The best thing I think Darcy did for me was help teach me to take care of my body,” says Kaleigh Fratkin (COM’14), who played defense on the Terrier women’s hockey team. “I was the type of player that had a tendency to overtrain, and Darcy was always there to help make sure that I wasn’t burning myself out.” 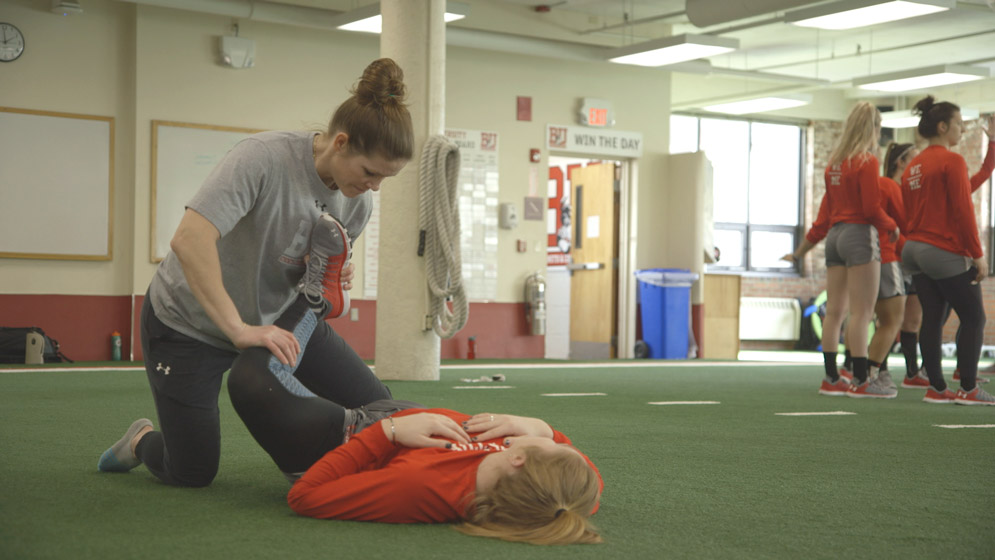 Years after graduating, her coach still watches her back. Literally: “I threw out my back last year and didn’t have a good person to go see, and sure enough, I called up Darcy and she provided me with someone she worked with to take care of me,” Fratkin says.

When Shannon Doyle (SED’15) came off hip surgery to skate with the hockey team senior year, she was surprised to find herself fitter than she’d ever been after working with Gould, whose carefully researched precision techniques paid off in the conditioning regimen she crafted “for me as an ice hockey player, but also as an individual,” Doyle recalls.

She still draws inspiration from something Gould told her: “You feel that burn in your legs? In your lungs? In your arms? You have earned that burn; now it is time to push farther and get better.”

About mind as well as body

Gould seems hard-wired to abhor sitting still. As a girl, she played early-morning hoops with her sister and friends for years. She first tried lifting weights in the third grade—and enjoyed it. As a San Francisco State University undergrad, she played on the women’s varsity basketball team, two years as captain. The gym was closed early mornings, so instead of basketball, she worked off her energy in the weight room.

By the time she was in graduate school, Gould was aiming for the Olympics. She made it to the US nationals, where she came in seventh place. As it was a trials year for Team USA, the top three lifters were light years ahead of her and everyone else, “but it was a great experience,” she says. (In those days, Gould’s clean and jerk—lifting the weights to shoulder level and then overhead—was 187 pounds.) She has been at BU since 2004.

Gould still rises at 3:30 or 4:30 mornings and tries to get in a workout when she can, which isn’t always; she often hits the weight room at 6 am to work with her athletes. She spends the rest of her day on student conditioning programs, attending practices, working with some off-campus clients, and researching the latest conditioning techniques.

Of course, athletics is about mind as well as body. Sometimes, an athlete is burdened by life’s curveballs—a breakup, a parent’s death, personality conflicts in the locker room. Gould is the mother of two and in such cases, she morphs, in her words, into “the aunt across the street,” offering a sympathetic ear.

This may be her favorite part of the job, she says, because it’s a chance to offer lessons students can continue to draw on once they’ve graduated. “The sports psych part of it also transitions to the real world. I want them to almost hear my voice when they’re sitting in their office at their computer saying, I just don’t think I can do this. And it’s like, no, I’ve got to push, I’ve got to get into overtime. Let’s go.”

Gould relishes the letters and  emails she gets from former students who tell her that a workout, or even something at their job, reminded them of her. “I save them all,” she says, “to think back on the fact that they enjoyed their time in the weight room, because a lot of people think it’s torture. So the fact that they feel like they were in a good place is something I’m so prideful about.”

Bill Politis can be reached at bpolitis@bu.edu.

Darcy Gould Helps BU Athletes Be Their Best
2
share this