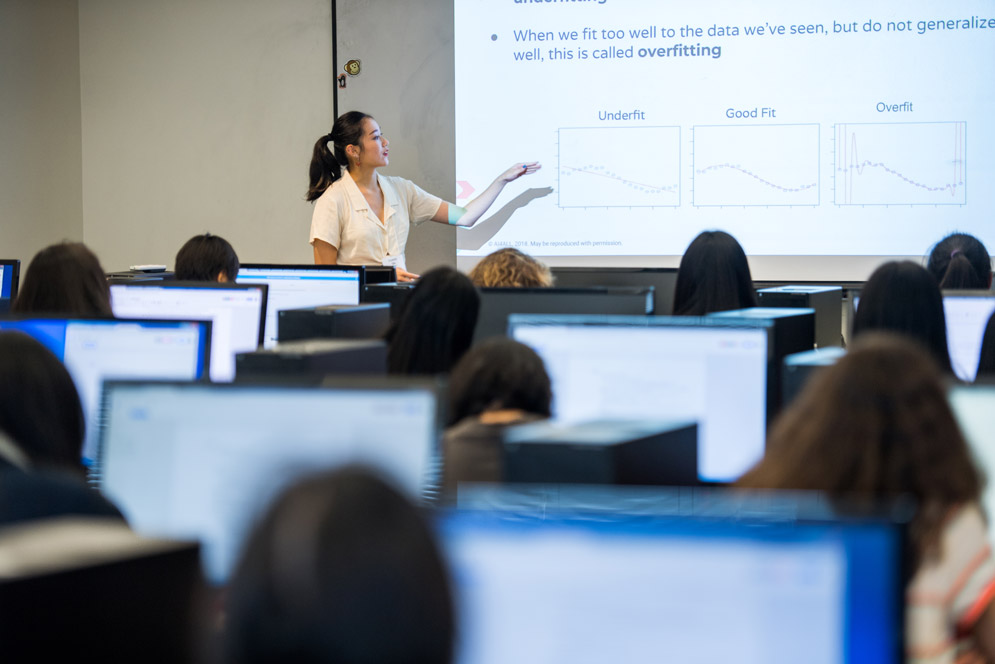 On a recent afternoon, 25 young high school women gathered in a BU computer science (CS) classroom to learn about artificial intelligence (AI). Half of them were learning the basics of Computer Vision for American Sign Language alphabet recognition. They watched as a photograph of a house transformed on-screen into a numerical code that the artificial intelligence software could understand. The rest of the students were engaged in a project called Twitter Classification for Disaster Relief, where they were using a Naive Bayes classifier to classify by category tweets relating to Hurricane Sandy.

The young women were enrolled in Boston University AI4ALL, a new summer program designed to promote greater diversity and inclusion in the overwhelmingly male AI field. The three-week program, which concluded earlier this month, introduced the rising juniors and seniors from the Boston area to AI through a series of team projects, industry field trips, and presentations from guest speakers, capped off with a group research project and presentation to friends and family.

The program is a partnership between BU and AI4ALL, a nonprofit aiming to increase diversity in AI. Launched by some of the country’s leading AI technologists, including Fei-Fei Li, chief AI scientist at Google Cloud, and funded by influencers like Melinda Gates, cochair of the Bill & Melinda Gates Foundation, and Jensen Huang, president and CEO of Nvidia, AI4ALL creates opportunities for underrepresented female high school students through education and mentorship programs. BU is one of six universities that have partnered with the organization: the others are Stanford, Princeton, UC Berkeley, Carnegie Mellon, and Canada’s Simon Fraser University.

During the class, Tammy Qiu (CAS’19, CFA’19), one of four undergraduate coordinators who are instructors in the program, asked the high schoolers if they had any questions. Immediately, hands shot up as they asked for clarification on certain points.

“I finally understood how functions work a few days ago, and I got so excited,” says Newton South High School rising junior Kathryn Gundal. “You can teach a machine how to think like a human…how to solve complicated math problems, and figure out the fastest route to someplace. I think that’s really amazing.”

Nationally recognized AI expert Kate Saenko, a College of Arts & Sciences associate professor of computer science, had long wanted to host an AI summer program at BU. So when AI4All cofounder Olga Russakovsky approached her about creating a program here, Saenko enlisted the support of Cynthia Brossman (COM’94, Wheelock’12), CAS director of STEM outreach and diversity and director of BU’s Learning Resource Network (LERNet), which runs a series of enrichment programs in science and technology for K-12 students and administers BU AI4All.

“I think that one of the goals of this program and of the national nonprofit AI4All,” Saenko says, “is to not just motivate high school girls, but also groups who are underrepresented in CS and AI to pursue computer science. And not just by showing them the standard applications of AI that you hear about, like self-driving cars and stock market trading, but by showing them more humanistic aspects of AI, like how AI can help people or be applied to help communities.”

“We went on a field trip to Affectiva and there was this girl there who was only 18 years old,” says Katherine Stevo, a rising junior at Buckingham Browne & Nichols School, “and she was already making her own app and website to be able to tell if people have Parkinson’s disease…like 5 to 10 years before doctors can even recognize it and treat it. I thought that was amazing because she was our age and already doing this.”

Stevo says that finding a community of young women in STEM (science, technology, engineering, and math) fields at BU has been an inspiring experience.

“At our high schools, in a lot of the programs we are the only girls, so I didn’t know that a ton of other girls were actually interested in STEM,” she says. “Finding other girls who loved it was great for me because I met so many friends and mentors.”

And that, says Brossman, is just the kind of reaction she is hoping for. “The girls have fun, they learn about interesting topics, and they feel challenged. They just grow so much, and they come out of the experience with more confidence and self-esteem.”

BU AI4ALL is the latest in a series of programs Brossman has launched at BU to encourage more high school women to pursue degrees and careers in STEM-related fields. Others include the Artemis Project, a five-week computer program for rising ninth grade girls that launched in 2011; GROW (Greater Boston Research Opportunities for Young Women), which gives female high school rising seniors a chance to spend six weeks working in a research lab and receive a stipend for their work; Summer Pathways, a seven-day summer residential program that exposes participants to a broad array of STEM careers and allows them to meet women working in these fields; and Codebreakers, a three-week program for rising sophomores and juniors focused on cybersecurity.

The goal of each program, Brossman says, is to not only introduce young women to STEM fields, but to boost their confidence. Many of those who enroll in one program will then move on to the next. “Often at the end of a program, a parent will say, ‘My daughter had such a good time—do you have any other programs for her?’” Brossman says. “The continuity of experiences is really important, so they don’t lose their enthusiasm and they continue to grow.”

Case in point: Stevo enrolled in the Artemis Project her first year and was so impressed she signed up for Codebreakers last year and enrolled in AI4ALL this summer. “Every program is totally different in its own regard,” she says. “Freshman year, I did Project Artemis, and that’s kind of an introduction to all facets of STEM: robotics, coding, multiple languages like HTML, python. Then, in Codebreakers, it was focused on cybersecurity and we only learned python, and finally AI4All, which is focused on artificial intelligence, and we are still coding in python.”

Her BU experiences helped her land a summer job this year at the Russian School of Mathematics coding its online activities in HTML.

“It’s because of these programs at BU that I know how to do this, and it’s just built my passion,” she says.

Introducing High School Women to the World of Artificial Intelligence