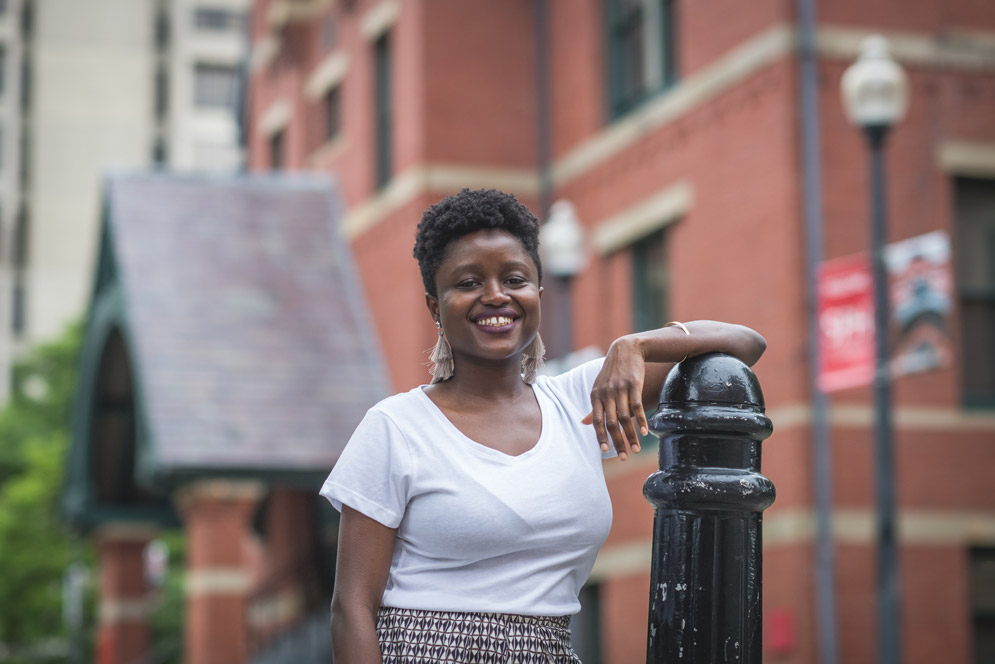 Stories of Black Motherhood, a film project by Fatima Dainkeh (SPH’18), came about because Dainkeh wanted to put a face to data around healthcare inequality. Photo by Jackie Ricciardi

As a graduate student studying public health at BU, Fatima Dainkeh (SPH’18) knew that the infant and maternal mortality rate among black mothers is higher than the rate for white women—no matter their income or education level.

But as a young black woman herself, just knowing this fact wasn’t enough. And parsing the racial discrimination behind the data in class discussions felt emotionally exhausting. For Dainkeh, the daughter of immigrants from Sierra Leone, the inequality surrounding poverty and race in healthcare in the U.S. hit close to home.

So she seized on an idea, which resulted in a new short film, Stories of Black Motherhood. In it, three Boston mothers talk about the ways race, class, and gender have influenced their lives, shaping their feelings—and fears—about motherhood and the healthcare system.

“There hasn’t been a lot of work hearing the stories these women have to tell,” Dainkeh says. “I think we need to hear more.”

For her film project, Dainkeh interviewed 18 women, culling the stories down to three women, two living in Boston’s Dorchester neighborhood, a third living in Jamaica Plain. From their kitchen tables and living room sofas, the women speak candidly about their experiences, such as how considerations about race enter their thoughts, even during times when they are sick, vulnerable, and in need of medical intervention.

Josette Williams, one of the mothers in the film, describes being sick and going to the hospital, yet unable to shake the idea that the mostly white staff views her negatively because of her race and social class.

“Maybe if I walked in as a lawyer they would treat me different,” Williams says. “But I walk in as a single mom, no partner, and sick.”

Tanya Nixon-Silberg, another mother in the film, recalls her discomfort being cared for by an all-white nursing team at her daughter’s birth. She says the visits from her black obstetrician offered doses of relief.

“She understood that I needed an injection of blackness,” Nixon-Silberg says, “so she came by with poems and songs” for me.

The film was the product of an independent project Dainkeh began last winter with support from her advisor, SPH clinical assistant professor Candice Belanoff in the department of community health sciences.

Belanoff says the short film surpassed her expectations because it offers “critically important” information to health professionals about how black women experience the healthcare system.

“Being black and a mother comes with a unique set of experiences that are more than the sum of their parts,” Belanoff says. “It’s harder and harder to ignore this in public health. You can’t talk about infant mortality without talking about this, otherwise you’re doing bad science.”

Dainkeh not only understands the issues, she has lived with them. She grew up in Trenton, N.J., and later Rivendell, Md., outside Washington D.C., in low-income predominantly black neighborhoods. Her parents, immigrants from Sierra Leone, and four of her siblings came to the US as refugees. (Dainkeh was born in Trenton.)

She says she realized quickly that being black in the US carried with it certain negative stereotypes that her family had never experienced in Sierra Leone.

“Growing up, I viewed myself as different, because I was taught that everything was possible for me,” she says. “It was very hard to eventually realize that no matter what my family went through, how hard they worked or how much they struggled to come to this country, they still have to worry about the racialization that happens here, and how it affects your health and quality of life.”

Dainkeh says her parents separated when she was young and she was raised by her mother, who worked long shifts as a licensed practical nurse to support her children as well as relatives depending on her in West Africa.

It’s a life that has taken a toll on her mother’s health.

“I see firsthand what that has done to her, always being the person to not only take care of your own family but people outside the US, doing twice as much with less support because you’re an immigrant,” Dainkeh says.

She was awarded a scholarship to attend St. Mary’s College of Maryland, a small liberal arts school, as an undergraduate. Public health became her calling, and Dainkeh came to BU because the school embraced the kind of work she wants to do around “social determinants of health.”

It’s also the kind of work that is gaining momentum in the Black Lives Matter era. Dainkeh says around the time she conceived of the project, tennis star Serena Williams spoke out publicly about her own complicated labor during the birth of her first child. Williams had to self-diagnose the blood clots in her lungs, had an emergency C-section, and spent the six months after the birth in bed.

In an essay for CNN, Williams called attention to the scare and the fact that black women of all economic strata in the US are more than three times as likely to die from pregnancy or childbirth-related causes, citing data from the Centers for Disease Control and Prevention.

“Every mother, everywhere, regardless of race or background deserves to have a healthy pregnancy and birth,” Williams wrote.

Dainkeh says such messages, especially if they come from high-profile people with celebrity platforms like Williams, are key, and long overdue. She said the data around healthcare inequities have been common knowledge in the field for years.

Initially she thought her project would bring black women together in healing story circles. The project morphed into a video when an acquaintance from the Trinity Boston Foundation, where Dainkeh worked as a community learning and racial equity intern, introduced her to Tariana V. Little. A Harvard T.H. Chan School of Public Health student studying for her doctor of public health, Little is also the CEO of EmVision Productions, a small Boston-based media agency specializing in “social impact storytelling” through video.

The two women already had much in common, from their mutual interest in public health to their identities as women of color and daughters of immigrants. (Little’s family emigrated from the Dominican Republic and Germany to Massachusetts.) Little, after meeting Dainkeh for lunch, agreed to take on the project as a coproducer, offering videography services pro bono.

“When you work in this area and not only understand the language of the field, but the language of life and how you live through these issues, that builds trust very quickly,” Little says.

The women created a flier and used Facebook and other social media platforms to reach community groups, churches, and nonprofits for women who would share their experiences on camera.

Dainkeh says she was occasionally rendered speechless or brought to tears by some of the stories.

One woman with a four-year-old son told her about how she had tried her best to “show she was a different woman, not the black woman stereotype.” But when she had her first child, and left an abusive relationship, and had no resources, it forced her to apply for government assistance. She said her education and professional experiences did not eliminate her from being viewed as a “black welfare queen,” Dainkeh says. She said she’d never felt so lonely.

Since graduation, Dainkeh took a job at YW Boston as a racial justice senior coordinator working with members of community groups and organizations. She and Little also hope to show their film at university forums and community workshops.

Dainkeh also says she sees motherhood in her own future. The women in her film are not despairing, she says. They are often funny, smiling, and fearless in their nurturing, qualities the research data don’t capture.

“I want black women to know we hear you, we see you and believe you,” Dainkeh says. “That, in itself, is also healing.”

Black Moms, in Their Own Words

There are 5 comments on Black Moms, in Their Own Words