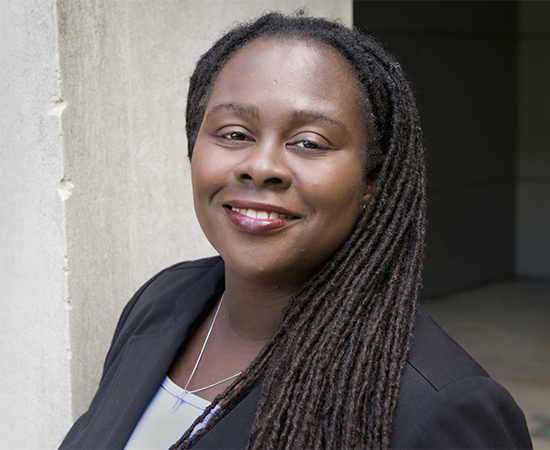 Angela Onwuachi-Willig says she decided to leave top-ranked UC, Berkeley, School of Law to take the LAW deanship because of the University’s commitment to the causes and ideals she cares deeply about. Photo courtesy of Onwuachi-Willig

Angela Onwuachi-Willig, a renowned legal scholar and expert in racial and gender inequality as well as civil rights law, has been named dean of the BU School of Law. A prolific writer and authority on employment discrimination and law as it relates to social injustice, she comes to BU from the University of California, Berkeley, School of Law, where she is the Chancellor’s Professor of Law.

“We are delighted to have recruited Angela Onwuachi-Willig to Boston University as the next dean of the BU School of Law,” says Jean Morrison, BU provost and chief academic officer. “She has an excellent record of accomplishment as a scholar and teacher, and as dean, Dr. Onwuachi-Willig will continue the advancement of the quality and stature of the BU School of Law.”

Morrison says Onwuachi-Willig, who has published extensively in leading law journals, including the Yale Law Journal, California Law Review, and the Georgetown Law Journal, is a high-impact academic. Prior to her post at Berkeley, she was the Charles and Marion J. Kierscht Professor of Law at the University of Iowa College of Law, as well as a finalist for the Iowa Supreme Court.

Onwuachi-Willig says she made the decision to leave top-ranked UC, Berkeley, School of Law to take the LAW deanship because of the University’s commitment to the causes and ideals that she cares deeply about.

“I was initially drawn to BU Law because of its outstanding academic reputation and its amazing community of students, staff, and faculty. The faculty at the law school are stellar. They are highly productive. They write first-rate legal scholarship, and they are as committed to being excellent teachers and mentors for their students as they are to being great legal scholars. The students are also very impressive. They are smart and ambitious. They care not only about being excellent lawyers but also about being excellent citizens in their communities.

“Frankly, the more I learned about the school, the more I was attracted to it. I was particularly touched by and drawn to BU Law’s history of access and diversity. The fact that its doors have been open to all since its founding is incredibly meaningful to me as an African American woman. The law school’s body of alumni—in fact, the University’s body of alumni, including Dr. Martin Luther King, Jr. (GRS’55, Hon.’59)—are incredibly impressive. When I discovered that Barbara Jordan (LAW’59, Hon.’69) was an alumna of the law school, it felt like a sign. I was born and raised in Houston, Tex., and I grew up with Barbara Jordan as one of my idols.”

Onwuachi-Willig’s long list of awards and distinctions includes her 2017–2018 appointment as the William H. Neukom Fellows Research Chair in Diversity and the Law at the American Bar Foundation, and her selection by the National Law Journal as one of the “Minority 40 under 40” lawyers to watch.

In 2013, Yale University Press published her book According to Our Hearts: Rhinelander v. Rhinelander and the Law of the Multiracial Family. The work examines a story that came to her attention because of her own marriage to a white man, that of the interracial marriage between Leo and Alice Rhinelander in 1920s New York. Interracial marriage was legal in the state at that time, but the couple’s marriage license identified both parties as white, and when a newspaper reported that Alice Rhinelander was “colored,” the events that unfolded altered their lives forever.

Texas native Onwuachi-Willig earned an undergraduate degree from Grinnell College and a law degree from the University of Michigan, where she was a Clarence Darrow Scholar, a Michigan Law Review note editor, and an associate editor for the founding issue of the Michigan Journal of Race and Law. She also holds an MA, an MPhil., and a PhD in sociology and African American studies from Yale University.

Onwuachi-Willig says she is currently delving into historical and social legal work, in particular, the case of Emmet Till, a 14-year-old African American who was lynched in Mississippi in 1955, and Trayvon Martin, a black teenager shot and killed in Florida by a white man in 2012.

As dean, she says, she will be a passionate advocate of keeping the law school financially accessible. She credits Maureen O’Rourke, current LAW dean, who is stepping down to return to her teaching post, with putting the school on an excellent path forward, noting the value the school has placed on diversity.

“The current dean, Maureen O’Rourke, has been an excellent leader of the law school for 14 years,” Onwuachi-Willig says. “She is widely recognized for her impact on legal education, and she has left an amazing foundation, which I will build on—of course through collaboration with the staff, faculty, and students. Bob Brown and Jean Morrison are tremendous leaders, and my priorities align well with their vision for the school. Boston University as a whole is on the move, and I am excited to play a role in advancing and continuing its incredible growth and development.”

Members of the eight-person selection committee that recruited Onwuachi-Willig say that her commitment to legal education, extensive mentorship to other academics seeking tenure, and vision for the future of the law school made her a natural choice.

“She has it all,” says search committee member Katharine Silbaugh, a LAW professor. “She is an exceptional scholar, recognized as a giant among legal academics, and one of the top writers in race and law today.” She also notes Onwuachi-Willig’s reputation as a generous mentor to young scholars both inside and beyond where she works. She says references noted her integrity, quiet confidence, drive, and tireless work ethic.

“Her work on diversity and inclusion across multiple institutions makes her the ideal leader for the 21st century legal landscape,” Silbaugh says. “I can think of no better way to honor the exceptional legacy of Dean Maureen O’Rourke than to be led by someone with such a strong reputation for excellence, personal integrity, and humanity.”

Committee member James E. Fleming, the Honorable Paul J. Liacos Professor of Law and LAW associate dean for intellectual life, says the school’s focus on interdisciplinary scholarship, social justice, and public service will likely increase as part of the new dean’s vision for LAW. Fleming says Onwuachi-Willig is one of the most important scholars writing about race and the law.

Another committee member, Adil Najam, dean of the Frederick S. Pardee School of Global Studies, says the incoming dean’s interdisciplinary scholarship is a boon to BU.

“Angela Onwuachi-Willig not only brings amazing intellectual heft, but also a deep thoughtfulness and a caring spirit,” Najam says. “I hope she will further strengthen the interdisciplinary spirit and links between BU Law and other schools and colleges at BU.”

Noted Scholar of Inequality to Lead BU School of Law