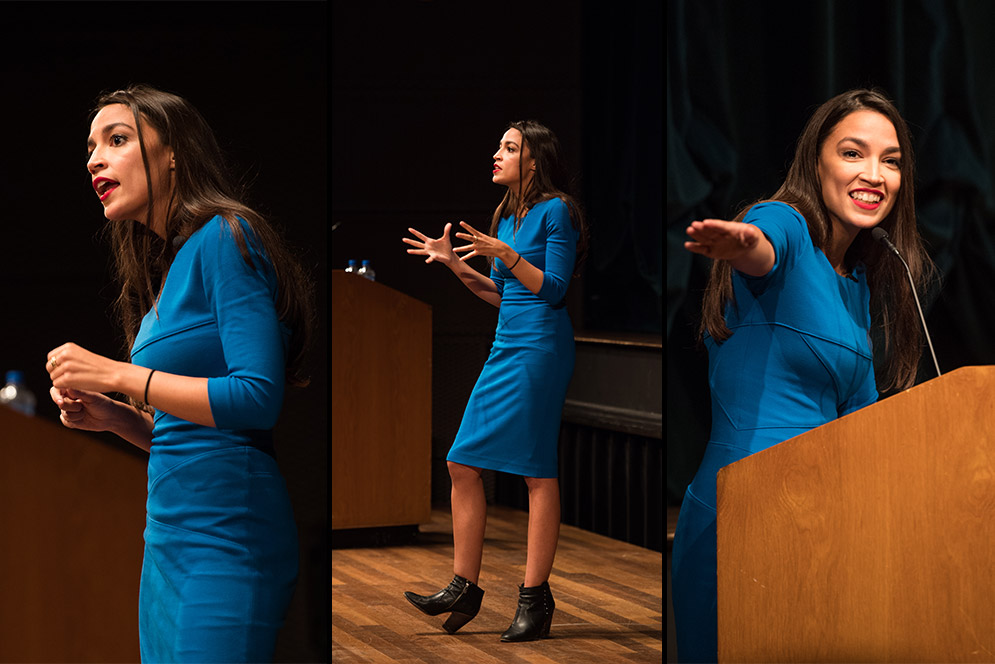 Alexandria Ocasio-Cortez, a rising star in the Democratic party, urged BU students to become activists for social justice despite the odds when she spoke at the Tsai Performance Center on Monday.

Using her own life and long-shot congressional campaign as an example, Ocasio-Cortez (CAS’11) told the crowd of nearly 500: “I could not bear to be hopeless anymore, so I chose to do something…. On June 26, we upended the political establishment.”

That’s when the 28-year-old stunned longtime US Representative Joe Crowley in the Democratic primary in New York’s 14th District, which includes areas of Queens and the Bronx. A first-generation Puerto Rican American long focused on social injustice, she ran on a platform that included Medicare for all and criminal justice and immigration reforms—at first campaigning between shifts at her restaurant job.

With her congressional victory all but assured (the 14th District is overwhelmingly Democratic, and she’s expected to handily beat little-known Republican candidate Anthony Pappas in November’s midterm election) Ocasio-Cortez has been spending much of the last few weeks campaigning for other progressive candidates and causes around the country.

Earlier on Monday, she was one of several prominent Democrats who spoke at a large rally at City Hall Plaza, where protesters had gathered to urge the US Senate to vote no on confirming Supreme Court nominee Brett Kavanaugh, whose confirmation hearings have been marked by sexual assault allegations. “It’s traumatizing. I feel for every woman and survivor in America to just live through this week,” she told the BU audience, but added that the problem extends beyond Kavanaugh.

“I cannot convey how serious and dangerous it is and how imperiled our most basic political institutions are right now,” she said. “When people say, how could this have happened—it is because of the slow slide of our public institutions, when too many people sat on the sidelines and read the news and said, ‘Wow, that’s crazy. Time to go to class.’

“We want to pretend that this moment is normal, just a little bit more partisan than usual,” she said. “But this is no longer a partisan battle. A generation ago, committing perjury and lying to Congress multiple times in your nomination hearing would have been an automatic disqualifier. To see the rules that we are willing to dismantle just to insert a partisan pick is truly concerning.” 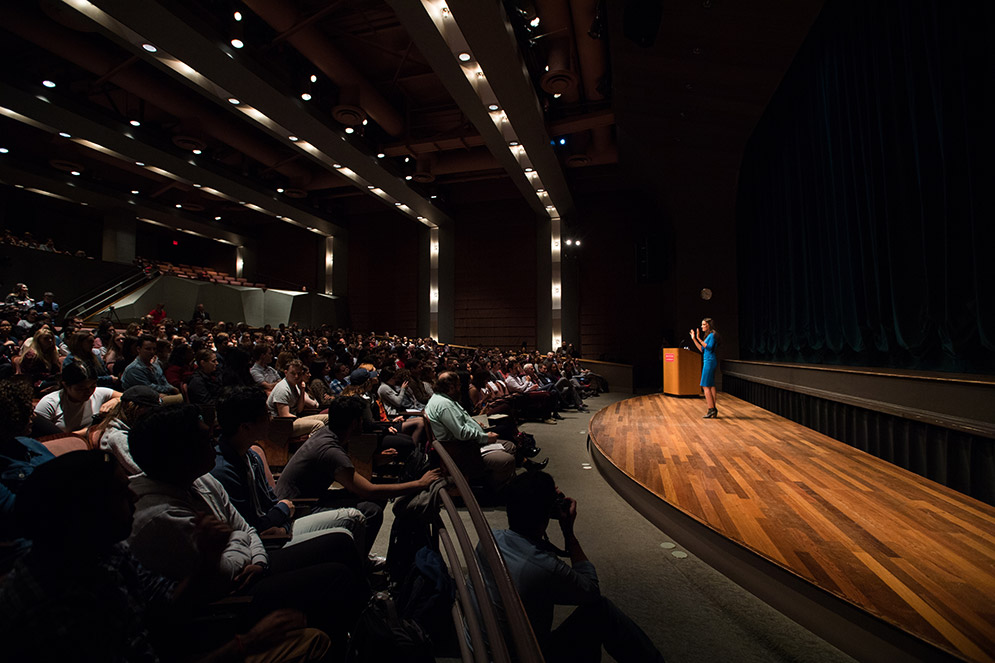 Ocasio-Cortez said that the way the nation can get through this moment is through activism. The “tiny gesture” made by Senator Jeff Flake (R-Ariz.) last Friday, when he asked for a week’s delay in the Senate vote so the FBI could investigate the charges against Kavanaugh, she noted, was inspired by two activists who cornered him in an elevator and told him their stories of sexual assault. One of those women, she said, was an immigration activist from her district, who risked everything to speak out.

We need to be championing the causes of our neighbors, she went on, and make sure that the people experiencing injustice are not the only ones advocating for themselves.

“We cannot in this moment allow just women and survivors to be fighting for their own rights, because that makes it harder,” she said to loud applause. “So what I’m asking is for all of the men here to step up, because we’re not in the room when it’s all men and someone says something disgusting.… Sex assault is not about a crime of passion, it is about abuse of power. Men and allies, now is your moment.”

The students in the audience found her message compelling. “She was just so inspiring,” said Giancarlo Lobo (COM’20), a campus activist for divestment from fossil fuels. Ocasio-Cortez took questions after she spoke, and Lobo asked her for advice about grassroots campaigns and getting people to care about an issue. She emphasized the importance of two things: consistency of message and persistence, citing the old anecdote about record companies knowing they could make any record a hit if they could get it played on the radio enough.

“I’m just trying to grow our campaign and make it stronger,” Lobo said afterward, “and listening to a BU alum telling me how to do so is the most valuable thing I could ask for.”

“I admire her conviction and her faith in the truth and that the truth will eventually prevail,” said Masha Vernik (CAS’19). “That’s something I look for in myself a lot, and it’s so easy to steer away from that in a world where we’re told, for example, not to believe survivors of sexual assault and to doubt social justice and see it as something we have to fight for, not something that’s deserved. I look up to her as an inspiring person, to remind myself to focus on what is true and what is right.”

Ocasio-Cortez’s visit was organized through the College of Arts & Sciences political science department, but many cited the efforts of Samantha Delgado (CAS’20), who introduced the congressional candidate. And the event wasn’t all geopolitics: Ocasio-Cortez managed a shout-out to her old dorm crew in Warren 16-B. The friends she made at BU, she said, remain her closest friends and helped her throughout her campaign.

Ocasio-Cortez “was a bright shining light” when she was at BU, recalled Raul Fernandez (COM’00, Wheelock’16), a Wheelock College of Education & Human Development lecturer, who was in the Tsai audience. Fernandez said she was a student ambassador at the Howard Thurman Center for Common Ground, when he was assistant director, and she came around often for the regular Coffee and Conversation events.

“Everybody knew her as one of the smartest people in the room for sure,” says Fernandez, who shares her Puerto Rican heritage. She didn’t talk about political ambitions then. “Her main focus was using the time she had on this planet to benefit people in the community.”