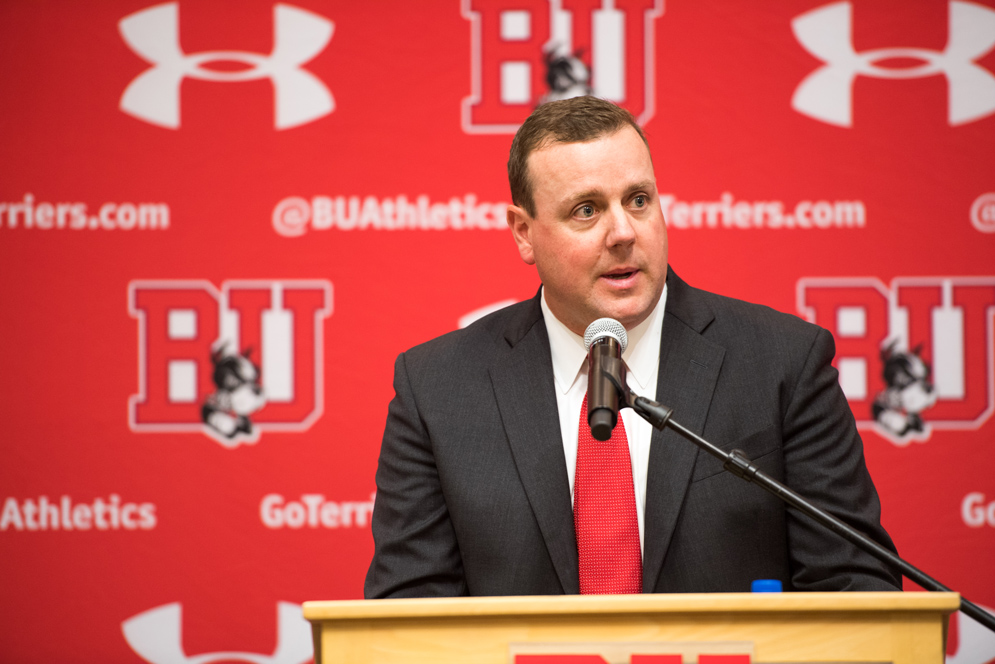 “I wish the season started tomorrow,” Albie O’Connell said while being introduced as BU hockey’s new men’s head coach at a press conference at Agganis Arena on Wednesday. Photo by Cydney Scott

BU Hockey introduced a familiar face as its new men’s head coach at a press conference at Agganis Arena on Wednesday: Albie O’Connell, associate head coach the last three seasons under David Quinn and a four-time Beanpot winner as a Terrier player.

“This is the opportunity of a lifetime,” said O’Connell (CAS’99), who grew up in nearby Watertown playing hockey and dreaming of attending a Beanpot school. “I can’t wait to get this thing going. I wish the season started tomorrow.”

As the 12th head coach in program history, O’Connell replaces Quinn (CAS’89), who left in May after five years to take over as bench boss for the New York Rangers.

Drew Marrochello, director of BU Athletics, said O’Connell was the first person he talked to about the job. As he spoke with outside candidates, he added, instead of comparing them to Quinn, he found himself measuring them against O’Connell.

O’Connell praised his predecessor and said he plans to keep Quinn’s system largely in place: “I’ll do some things a little different, but the structure is there and it’s not broken.”

“I had a great time here as a player,” he said, “and I learned you have to come to work every day and compete.”

Considered one of the NCAA’s top recruiters as a college coach, O’Connell returned to BU in 2014 as an assistant under Quinn and was named associate head coach before the 2015-2016 season. He has helped develop numerous Terriers into NHL-ready talent, including Olympian Jordan Greenway (CGS’17, CAS’19) and All-Americans Jack Eichel, Matt Grzelcyk (COM’16), Charlie McAvoy, and Danny O’Regan (COM’16).

During the past four years with O’Connell on staff, the Terriers have qualified for the NCAAs each season, the program’s longest streak since nine straight in the 1990s. After finishing as the national runner-up in 2015 and collecting the Beanpot and Hockey East titles, BU reached the NCAA quarterfinals in both 2017 and 2018 and is the defending Hockey East champion.

“I am really excited that Albie was a candidate for this job and has taken the position,” said Robert A. Brown, BU president, at the press conference, calling him a “truly superb” coach. “He also understands Boston University today, both the chemistry needed for a world-class hockey program, and what it takes to be a successful student-athlete in the rink, in the training room, and both inside and outside the classroom. He will be successful, I have no doubt.”

The players learned the news of O’Connell’s appointment Tuesday night. “I asked one of the guys if they were surprised, and he said, ‘We might have been, but we saw Albie show up in a sport coat during the day, so we figured something was up,’” Marrochello said, to laughter from administrators, players, and O’Connell’s family members.

O’Connell earned a bachelor’s degree in history at the College of Arts & Sciences. He lives in Duxbury, Mass., with his wife, Kristen (Sargent’99), and their three children.