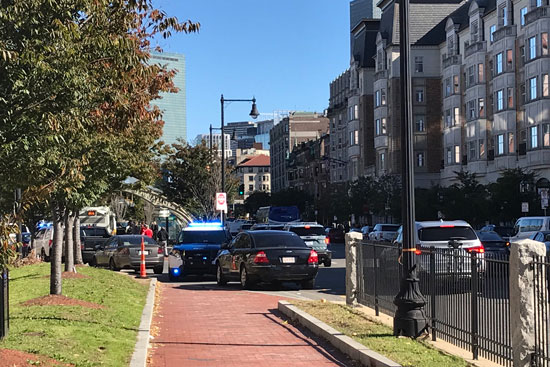 Kenmore Square was shut down Tuesday afternoon because of reports of a man with a gun. Photo courtesy of Boston25News

It started Tuesday at 1:25 pm with this alert from the BU Emergency Alert System: “Police are investigating a report of a man who may have had a gun near Landmark Center (Park Drive). Heavy police activity in the area. Please avoid the area. We will update with further information.”

And it ended not quite an hour and a half later with this notification: “BU Police is re-issuing the all clear on the incident in Kenmore Square. The time is now 2:43 PM. Please disregard any other phone calls from our messaging service.”

The incident ended calmly, and according to reports, it turned out that the gun was an Airsoft pellet gun, but those 77 minutes were anything but calm on BU’s East Campus.

The first BU alert told people to be on the lookout for, and stay away from, a man who may have a gun. After that, details came fast and furious across the BU community, from buzzing text alerts, phone call alerts, and email alerts. And if that weren’t enough to signal something was up, the sirens racing down Comm Ave were another clue.

Shops and restaurants were ordered to lock down. The MBTA put Green Line trolleys on hold between Government Center and Kenmore Square. People were kept from entering the square.

“I heard some police cars going by; I was getting the alerts, keeping an eye out the window,” says Kayla Furbish (CAS’19), who works as a research assistant at the Center for Anxiety & Related Disorders. She texted her parents to let them know she was fine. “I’m from Watertown—I was there during the whole fiasco,” she says, referring to the 2013 manhunt for the Boston Marathon bombers. “I’m pretty cool-headed. I made sure some people I knew [were aware], to make sure they were staying put.”

After the initial alert, which started when a person reported seeing a man with a gun somewhere near 829 Beacon Street, the search moved down Beacon toward Kenmore, when the man apparently went underground. At first it was reported he ran through the MBTA tunnels, but later police said he merely rode a train and got off in Kenmore Square. People in two buildings—Myles Standish Hall, 610 Beacon Street, and nearby 481 Commonwealth Avenue—were both advised to shelter in place.

It was not the best day to get to class for Myles resident Sumara Ali (CAS’21). “I slept through my first class,” she says, “and then was getting ready to go to my 2 o’clock class. I had just put on my sneakers when I started getting the [shelter-in-place] texts.” She headed to a friend’s suite in the dorm, “so we could both be there together.

“It only got unnerving once we found out [the suspect] was running around the Kenmore trains—that’s like a little close to home,” she says. “And then they were honing in on Barnes & Noble. That’s scary, ’cause that’s right next to us.” She phoned friends in nearby dorms to confirm that they were safe.

The incident also interrupted Marc Robillard’s day. The assistant vice president for auxiliary services had overseen the recent renovation of Myles Standish Hall. “No one’s going to mess with my new building,” he said with a laugh as he made his way toward his office later in the afternoon. He had walked to Myles during the commotion to help the staff there. “We stopped students who wanted to go out and said, ‘Look, you might not want to go out,’” advising prudence and not wanting to frighten them needlessly.

Next to come on the alerts were descriptions of the man: a white male with a beard, white T-shirt, blue jeans, and a bandage on his face. Then that was updated to include curly hair and a long-sleeved shirt with black sleeves and some red and black.

A further alert from BU said, “Please stay inside and lock your doors until we issue further information.”

And then the search moved indoors. “Police are focused now on the Barnes and Noble Bookstore in Kenmore Square,” the next alert said. “Please remain calm and stay where you are. Lock doors and stay away from Kenmore Square.”

Arts & Sciences anthropology postdoc Erin Kane was alone in a Cummington Mall lab, working on a paper about how orangutans move through trees, when she got the alerts. She was getting ready to leave for lunch, but instead locked the door and kept working. But, she says, she did think back to something that happened when she was at Ohio State: in November 2017 a student there was shot dead by police after he plowed a truck into pedestrians and stabbed several people with a knife.

These alerts did not have the same sense of urgency to her. “I didn’t get the impression this was a direct threat,” Kane said later in the day.

She was right. It was 2:13 pm when the shelter-in-place order was lifted, the neighborhood was deemed safe, and order was resumed—except, at that time, the suspect who caused all the chaos in the first place had not been captured. A pellet gun, however, was recovered.

A half hour later, at 2:43 pm, came the final message: “BUPD is lifting the shelter in place order. Police have determined that the area is safe. Please resume your normal activities. Thank you for your cooperation.”

Lucas Rodriguez (CAS’21) followed the stay-inside advice during the incident and kept to his room. Then he grabbed his skateboard to try and make the tail end of his writing seminar. “I’m 20 to 30 minutes late. No big deal,” he said with a shrug.

A Gun, a Suspect, a Manhunt Shut Down Kenmore Square

There are 10 comments on A Gun, a Suspect, a Manhunt Shut Down Kenmore Square

A Gun, a Suspect, a Manhunt Shut Down Kenmore Square
10
share this