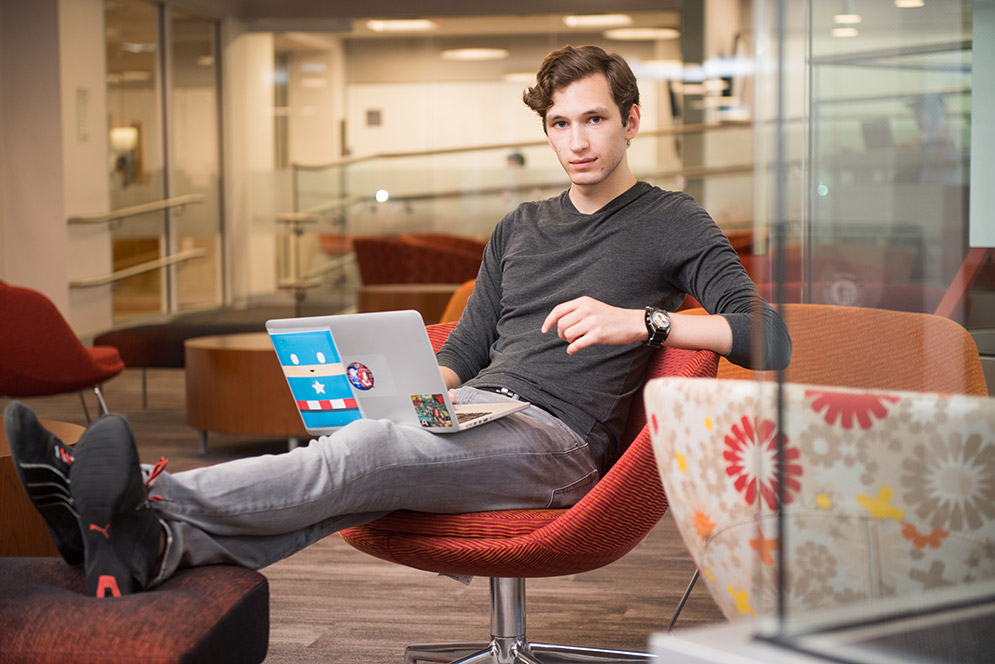 Most everything you’ve heard about African history and culture is wrong, according to Gregory Kerr, and much has been left out.

It is not a “giant mud pit full of clay huts and savages,” Kerr (CAS’18) says in a 21-minute video he has put on YouTube. Cataract surgery and C-sections were done there long before Europe got around to them. Africans designed magnificent architecture, including buildings in a coastal region built almost entirely from coral. To the extent that Africans are poor, that’s mainly a consequence of colonization.

Kerr’s video reality check is narrated by a wisecracking, animated version of the student “Blue,” named for his eye color, who is seated by an animated fire in a book-lined library. He runs down facts and fictions about Africa, aided by quick cuts to maps, pictures, and colloquial captions.

Thucydides and YouTube: there are two words you normally don’t hear in the same breath. But classics and philosophy major Kerr is using 21st-century social media to teach lessons about ancient history in a way he says the Greek historian, who lived four centuries before Jesus, would have approved. Thucydides believed history should be enjoyable to read, Kerr says. By that yardstick, “textbooks are garbage,” he continues. “Oh my God, it’s the worst way to convey information.”

So Kerr’s summer project for the Undergraduate Research Opportunities Program (UROP), which matches students with faculty mentors across the University and provides funding for projects, is to make 10 enjoyable videos for a YouTube channel (name: Overly Sarcastic Productions) that either debunk misconceptions about ancient cultures or teach enduring moral lessons. Besides Africa, his planned or completed topics will be Thucydides’ Athens, the Vikings, Japanese Samurai, Mesoamerican peoples, Persia, India, China, the Iroquois, and the Mongols.

His Africa video alone has drawn more than 46,000 views, with Athens just under that.

In the video above, Kerr discusses what he calls misconceptions about Africa.

Overly Sarcastic was started by a non-BU friend of Kerr’s who also enjoys history videos. Kerr actually hated history in high school because of those coma-inducing textbooks, he says. Then during his freshman year at BU, he attended a lecture by Loren J. Samons II, a College of Arts & Sciences professor of classical studies.

Samons discussed ancient Athens so engagingly, Kerr recalls, that “I thought, huh! History can be funny.” He began making YouTube videos on history for earlier UROP projects, with Samons proofreading his earliest scripts. “He destroyed everything I wrote,” Kerr says, “but it was done with love.”

His research sometimes requires consulting BU experts on various topics, as well as the occasional outsider. (He corresponded with an Australian medievalist who has his own YouTube history channel about the Vikings and samurai.) But “the actual information that I’m digging up isn’t locked away anywhere. It’s all fairly, readily discoverable” on the internet, he says, in sources ranging from documentaries to online encyclopedias.

In the video above, Kerr outlines myths and truths about the Vikings.

“The whole brunt of this project is, how do I take all this information that’s already pretty much out there and distill it in a way that is…as digestible as possible,” Kerr says. The real work is scripting the videos engagingly. “Anyone can sit down and write down what happened in the American Revolution, but it’s probably going to sound pretty boring,” he says. “I like to think that I have a certain skill in conveying that kind of information in an entertaining, aesthetically pleasing way.”

Thucydides also believed history should teach a moral lesson, he says. Kerr’s 14-minute Athens video emphasizes how the city-state made relentless war until it was defeated by Sparta. “Their hubris,” he narrates, “for all of the shiny temples it gave them, was the ultimate source of their downfall.”

Kerr’s UROP advisor David Roochnik is a classical sort of guy—Maria Stata Professor of Classical Greek Studies and a CAS professor of philosophy—but using modern media platforms to tell ancient history doesn’t offend him. “That’s what Thucydides was doing—he was writing. Writing was a relatively new technology,” Roochnik says. “It was the social media, the emerging media of the day….Presenting history in the form of books was maybe roughly equivalent to presenting history on a YouTube channel.”

Still, for all of Kerr’s use of modern social media, he acknowledges that old often beats new: “I’d much rather spend the extra 10 hours to read real Plato than read some dried-up-schmuck-on-the-internet’s summary.”