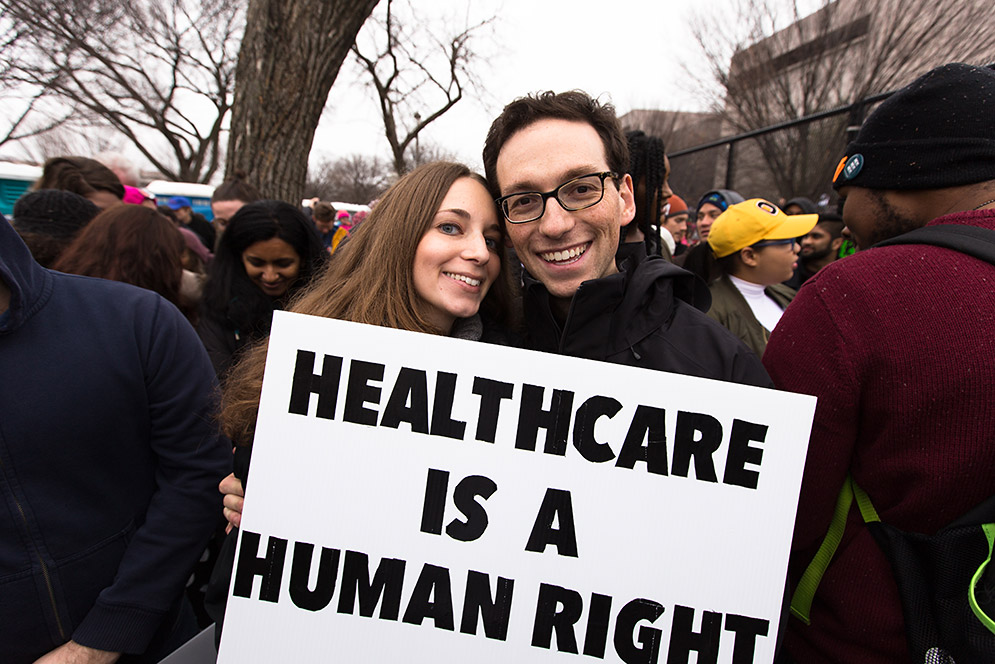 Kira Ganga Kieffer (GRS’19) and her husband, Aaron Eisman, at the Women’s March on Washington on January 21, which inspired them to create the website YouLobby.org. Photo courtesy of Kira Ganga Kieffer

In the weeks since Donald Trump’s inauguration, Americans seem to be riding a continuous wave of protest, with thousands assembling around the nation for or against impending congressional votes or executive actions by the new administration. A mere two voices in the chorus, Kira Ganga Kieffer (GRS’19) and her husband, Aaron Eisman, a second-year medical student at Brown University, have come up with a way for ordinary people to voice their concerns and opinions to their elected representatives.

As Ganga Kieffer and Eisman drove home to Massachusetts from the January 21 Women’s March on Washington, they were mulling over the need for a more efficient and effective way for Americans to quickly make their voices heard on important issues. They were galvanized by the hundreds of thousands participating in the march, but what, they wondered, could be done that would bring measurable results? They envisioned a more direct line to those in power than donning pink hats or chanting “No Wall” into the chill winter air. And they knew that notes and emails to lawmakers get about the same respect as letters to Santa, whereas old-fashioned phone calls are noted and logged.

By the time they reached Massachusetts, Ganga Kieffer and Eisman had came up with an idea: the website YouLobby.org. Type in your zip code for a list of congressional phone contacts, choose an issue, and draw on a suggested script for the calls themselves. They bought the domain name (cost: $12) while heading home. Back in Boston, they immediately got to work.

They took the presidential election results pretty hard, Ganga Kieffer says, and that was the motivation behind their first foray into activism.

“We wanted to really do something,” she says. Like countless others, she’s found herself consumed by a creeping sense of powerlessness and frustration. “My husband and I were inspired by the peaceful demonstration in D.C. and the sheer magnitude of people all over reaching out and really asserting the importance of equal rights to a healthy society. We thought, what can we do to help propel this momentum? What can we do as just two grad students to get people to take this one step further?”

The PhD candidate in American religious history and politics was already well versed in contacting her representatives. While theirs isn’t the first website to ease the way for activists, she says she found like-minded sites difficult to use and lacking in social media presence. “We were in the car and said, ‘Let’s do this.’”

In composing a script for phone calls to congressmen and senators, she took the lead from her mother, who likes to do her part, but, her daughter admits, “isn’t technologically savvy. She was having trouble and said, ‘Can you just write it down for me?’ Soon, every day I was emailing a concise, direct script to my parents and friends, and people really liked it.”

Ganga Kieffer and her husband, high school sweethearts from Connecticut, have been together for 11 years and married for 18 months and are natural collaborators. With Eisman’s knowledge of coding and Ganga Kieffer’s grasp of user-friendly web design, they set to work in a whirlwind of caffeine-fueled determination. YouLobby.org was up and running three days after they purchased the domain. By the couple’s estimation they’ve spent less than $300 on the project, with costs mostly involving access to subscription data sites that offer details beyond the open access Congressional Record. “We both had short careers before deciding to go back to grad school,” she says. “Aaron worked as tech-head for a small finance company, setting up databases and hosting, and I worked for six years in marketing at an ad agency, so we’re pulling on some of that experience in terms of the design, which is user-friendly, with very clear, concise writing.”

“You are what Democracy looks like,” trumpets the site’s homepage. “Inspired by the progressive activism of the Women’s March in January 2017, YouLobby.org is a tool designed to help regular Americans take political action by speaking up to those in power—their representatives. Members of Congress work for their constituents. They have a vested interest in listening to your concerns and ideas about what is best for the country. We know that lobbyists for special interest groups have tremendous power in Washington, D.C., that often does not align with the will of the people. YouLobby.org is designed to reclaim this power and put it back in the hands of voters and citizens.”

The user-friendly site, with its bare-bones design—no bells and whistles, just the information—features a prominent space for users to enter their zip code, next to the option to “Lobby Now.” Up pops a screen with a list of US senators and representatives, along with suggested scripts for both Republicans and Democrats, followed by possible talking points. For example, on February 10, the issue of the day was the confirmation vote for Tom Price as secretary of health and human services, with talking points referring to the future of Medicaid and the Affordable Care Act. Under the heading “Be Heard,” a “Select Your Issue” box scrolls to major issues such as education, immigration, civil rights, and the Supreme Court.

“We wanted the site to be visually stimulating, yet simple,” Ganga Kieffer says. “We designed it with three to four bulleted talking points that can inform the caller to ad lib, say something personal. We want people to not only be calling, but be a little more informed.”

Within the first 24 hours of YouLobby’s launch, which coincided with a Facebook and Twitter rollout, users had entered zip codes from 33 states. By February 28, approximately 1,138 zip codes from 38 states and the District of Columbia had been entered.

Ganga Kieffer says that YouLobby got a shout-out on Twitter from actor Laverne Cox of Orange Is the New Black, encouraging her followers to use YouLobby.org to make their voices heard.

When Ganga Kieffer and Eisman began, they saw the site as a volunteer effort, powered by the two of them. But just over a month later, 12 volunteers besides themselves are contributing content (writing and programming), 5 of them people they didn’t know before starting YouLobby. “We get emails from users providing suggestions for issues to cover all the time,” Ganga Kieffer says.

Contributing writer Jordan Conley (GRS’21) uses the site daily because “it makes it so easy to stay informed and connected. In this present climate, I have a tendency to feel overwhelmed and discouraged,” she says, “but contributing by writing some of the scripts has reminded me that many avenues of dissent remain open. Our representatives are answerable to us, and I am proud to work with YouLobby in encouraging the type of civic engagement so important right now. I recommended the site to everyone I know, and the response was cheering. Regular users now include my mother, my grandmother, and far-flung friends, one of whom made YouLobby her homepage.”

As for running the site, Ganga Kieffer says, “it’s been pretty addictive so far. We’re hoping to get it to a manageable point with our very high workloads.” It helps that the pair can unwind with their labradoodle, Shanti. “He inspires us to take a break for a second,” she says, “and see that life is good.”