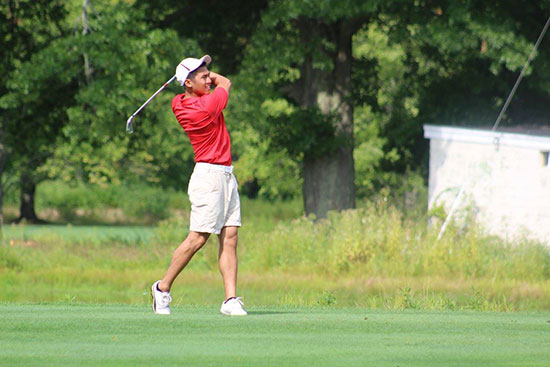 It’s been a remarkable year for the BU men’s golf club. After securing first-place finishes in the two opening tournaments of the four they played this season, the 16-member team qualified for the national championship for the first time. Starting today, they’ll be among six teams from around the country competing in the National Collegiate Club Golf Association (NCCGA) Match Play National Championship, being played in Hot Springs, Ark.

“We’re all really excited,” says club member Aaron Slamowitz (ENG’17), sports information director. “I think it’s great for the club. It shows how far we’ve come over the last year. It’s definitely going to be really special. It means a lot for the club and for recruitment going forward.”

The golfers began the season—which starts in the fall—with a win at the East Coast NCCGA Match Play Tournament, followed by a win at the annual Golf Beanpot Tournament and a second and a third place finish at the next two NCCGA Stroke Play tournaments.

“With golf, anything can happen,” says Slamowitz. “The best players can have bad days, and the worst players can catch fire. There are some big schools going to Arkansas, but if a lot of us can put together some steady golf, I think we’ll have a chance.”

Club members trace their success this season to a series of meetings that began last year. Despite a remarkable individual performance by Peter Gunawan (CAS’18), the team finished in the middle of the pack in the NCCGA New England region. Sensing that they had the potential to be better, Matt Kim (ENG’17) says he and a few other players decided to hold biweekly meetings, to book more tournaments each semester, to play every weekend (weather permitting), and perhaps most important, to find a practice facility with an actual course, as opposed to just going to a driving range a couple of times a week.

Kim says that he, Slamowitz, and Mike Hanna (ENG’17) “just started calling every course in the area. We would literally call up every day and ask, ‘How much would it take for the BU club to practice here?’ It took a lot of calls, but eventually we found a home.”

That home turned out to be the Harmon Golf and Fitness Club in Rockland, Mass., which has a nine-hole course, a grass range, and plenty of practice greens and bunkers. The BU team joined the club in the fall, but it didn’t come cheap—dues had to be increased from $100 to $700.

They also decided that being as competitive as possible meant that for the first time they needed to cut players from the team. Of the 28 people trying out last September, 16 made the cut, 12 of them returning players.

“We had to cut people,” says Slamowitz. “If you’re not under a 15 handicap, you shouldn’t try out. I think 10 of the kids on our team are under a 10 handicap. If we want to continue this trend of getting better, that’s just what we have to do.”

Head coach Steve Tasho says that despite the team’s new, more competitive edge, he reminds his players to have fun. “Golf is the hardest game in the world,” Tasho says. “Everyone who’s played knows how frustrating it can be. I just like to remind them to enjoy themselves. They need to have fun in order to do well. That’s when you’re playing your best.”

The team’s seniors say they are as excited about the future of the program as they are about the prospect of capturing a national title.

“I think we’ve built a really strong foundation with everything we’ve done so far,” says Kim. “We already have some scratch golfers along with some other guys who can shoot in the 70s and low 80s. If we can just add some more scratch golfers in the future and qualify and win a few national championships, this team could make it to the next level. From what I’ve heard, the club can turn varsity in less than 10 years if it stays on this upward trend.”

Manny Gomez can be reached at mannygo@bu.edu.