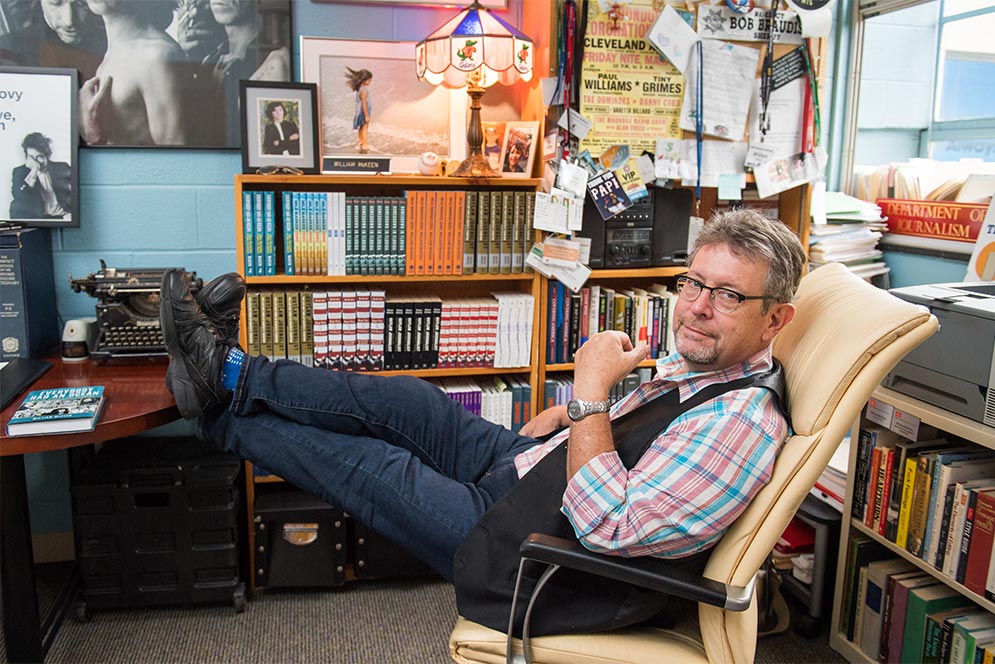 COM’s William McKeen was struck by what it must have felt like to look at the Los Angeles Times and see Charles Manson’s picture on the front page and think, wow, that was my roommate. Photo by Cydney Scott

The Beach Boys will always call to mind a blue-sky California beach day, real or imagined. Charles Manson will always be synonymous with the late-1960s California heart of darkness, those chilling hours after the sun went down on the counterculture.

That their paths not only crossed, but intertwined seems both incredible and inevitable.

It’s a story that has often been told, usually as a sidelight to the tale of one side or the other, and it has been nagging at William McKeen since his days as a music journalist in the 1970s. He is now a College of Communication professor and chair of journalism and associate dean, with 12 books to his credit, including the biography Outlaw Journalist: The Life and Times of Hunter S. Thompson (W.W. Norton, 2008). A couple of years ago, when illness took him out of the classroom temporarily, McKeen decided to write the story at last.

McKeen’s Everybody Had an Ocean: Music and Mayhem in 1960s Los Angeles (Chicago Review Press, 2017) begins with the true story of the Beach Boys. There was only one surfer among them (Dennis Wilson) and one musical genius (Brian Wilson), and all of them were brutally bullied by a tyrannical father. Yet somehow they produced sunny and increasingly sophisticated music that captivated America and the world. McKeen, a proudly self-described music geek, interviewed the Beach Boys several times back in the day. His book examines their connections to the crack session musicians known as the Wrecking Crew and L.A. music scenesters like the Byrds, Buffalo Springfield, Joni Mitchell, and the Mamas and the Papas.

As many of these artists fell prey to the gathering 1960s storm of fame and drugs and money, Dennis Wilson picked up a couple of sexy hitchhikers, who introduced him to their friend, a rock star wannabe named Charlie…

McKeen: I’d been thinking about it for a long time, by which I mean 40 years. I’d always been struck by what it must have felt like to wake up and look at the Los Angeles Times and see Manson’s picture on the front page and think, wow, that was my roommate. I started thinking about that back in the 1970s.

Then when I got diagnosed with cancer, my dean almost demanded I take medical leave. I was trying to schedule chemotherapy around the daily train schedule. I thought I needed activity, but I think the strain of the daily commute would have been too much, and it was very wise of the dean to insist that I take time off. And then I thought, well, I’ll finally do that. Because I’ve been carrying this crap around forever. I could gather all my articles and books and go lie in bed and work for an hour and pass out, then wake up in an hour and pick it up. It was manageable. It kept me busy.

What were your interactions with the Beach Boys like?

Like all people who like the Beach Boys, for me it’s truly a love-hate relationship, in that when they’re good, they’re fantastic, and when they’re not, they’re an embarrassment to the human race. In the early ’70s I traveled around with them and interviewed them for stories. The other day, I found a picture of myself with Carl Wilson—September 1, 1974—and I posted it to Facebook and said, “I didn’t realize it at the time but I was researching my new book.”

Carl was most helpful, a wonderful gentleman. Dennis was the least helpful, because he never wanted to commit to a conversation—his thing was always, “Ah, come on up to the room, let’s hang out.” He allowed me to ride in his limo and feel like a rock star for two minutes. But in the times I interviewed him, he would never talk about Charles Manson. And I understood why.

Because I think it freaked him out so much—that Manson could have easily killed him or his friend, record producer Terry Melcher (the son of Hollywood star Doris Day). I think Manson chose Sharon Tate and her friends as victims to show how easily it could be done. The Tate murder victims were primarily to scare the hell out of Dennis and Terry.

Hollywood has always been a cesspool of depravity. What was different in this era?

Before there was a music business, there was a movie business. Young people today are a very proud generation, and they think they invented depravity. But you tell them about Roscoe “Fatty” Arbuckle [the silent film actor tried and acquitted of rape and manslaughter of an actress] and that shuts them up. To me, Los Angeles from the start has kind of been the black heart of the country. Think about the Black Dahlia murder [a woman murdered and gruesomely dismembered in L.A. in 1947] and all the strange stuff that happened there. To me the stuff that happened in the rock ’n’ roll business in the ’60s was just kind of a continuation of that. It wasn’t even drugs; drugs had been around for a long time. I think it was more the openness. There was always a barrier with movie stars. I think the rock stars made at least a pretense of saying, you know, we are all one, man—peace, love, and flowers. And that’s what brought people like Manson forward.

It’s bizarre to think that if Manson had gotten the record contract he wanted, then the murders might never have happened.

I had avoided his songs all of my life until about three or four years ago when I came across this cheesy documentary about Manson and the Beach Boys and heard them, and I thought, hey, he doesn’t sound so bad. He was good enough to have a reasonable expectation that someone might sign him. Terry Melcher recorded him twice and Dennis recorded him once, at Brian’s house. I understand why Neil Young recommended him to Warner Brothers. Neil said, “He’s not so much a singer as he is a spewer.” But he had kind of a nice voice. If he had been offered a record contract, or if there had been an American Idol then, maybe those people wouldn’t have been killed.

Of course, the thing is, what if he makes it to the finals and doesn’t win?

Recalling the Music and Mayhem of Los Angeles in the ’60s