In his new novel, The Fortunes, Peter Ho Davies creates a rich, quirky chronicle of the stereotyping and marginalization of Asian Americans over the past two centuries. The narrative examines the lives of three real-life Chinese Americans, Ah Ling, a Chinese migrant railroad laborer during the 19th-century great Western expansion, Anna May Wong, an Asian film icon, and Vincent Chin, murdered in an economically ravaged Detroit after being mistaken for Japanese, and a fictional Chinese and Caucasian American couple adopting a baby in China.

The stories of the book’s characters bring the often overlooked legacy of Chinese Americans to life, and give weight and urgency to Asian Americans’ continued status as the other. By turns haunting (the transport home of the bones of Chinese laborers who died in the blasting of railroad tunnels) or comical (Wong being repeatedly called upon to teach chopstick technique to non-Asian actresses, lesser talents in lead roles that are off-limits to her), the book reminds us that anti-Chinese racism is as persistent as it is often perceived as benign. It is not benign, says Davies, who calls out cultural darlings such as longtime New Yorker scribe Calvin Trillin for viewing Asians solely in the context of their cuisine.

“The only thing I want to learn how to say in Chinese,” Trillin once wrote, “is, ‘I’ll have what they’re having.’”

Davies was born in the United Kingdom to a Welsh father and a Chinese mother. He teaches creative writing at the University of Michigan in Ann Arbor and is the author of the 2007 novel The Welsh Girl, which was long-listed for the Man Booker Prize, and the short story collections The Ugliest House in the World and Equal Love. In 2003 Granta magazine named him among its Best of Young British Novelists.

BU Today spoke with Davies about the evolution of The Fortunes, prevailing stereotypes about Chinese Americans, and the use of humor in writing that is hard-hitting as well as poignant.

BU Today: How long was The Fortunes gestating?

Davies: It’s been a long time. If I were to trace the earliest roots, it would go back 20 years. A year or two after I finished BU, I took a train journey from Boston to San Francisco. For me as a European, that was a really eye-opening experience. It was when I first learned about the role of the Chinese in building the railroad. I wasn’t ready to write the book then, but I thought about the material and researched it. It’s the sign of some kind of obsession that the writing took place seven or eight years after the publication of The Welsh Girl.

How did the novel evolve over time?

One of the strangenesses about the book is the transcontinental section was going to be the whole novel at one point. But Ling wasn’t a character who could carry the rest of the novel as it steps forward into history. 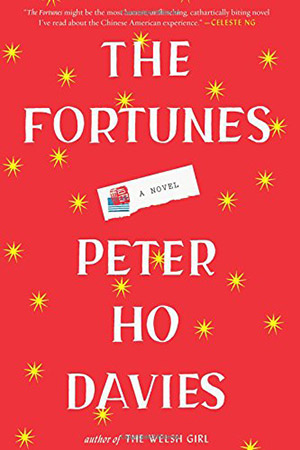 Have you been to China?

I have been to China only in the context of researching the book. That was almost two years ago, when I did a touristy package tour that would become the journey of the fictional characters. I wondered, would I vanish into the crowd? But what happened was that people I met saw me as not one of them—as foreign.

Some of the book reflects known historic events and some stems largely from your imagination. Why did you decide to blend them?

Although he existed, almost nothing is known about Ling. And Vincent Chin was less well known, but I’d heard of him and knew the story—it made it into the news in Britain. I was growing up in a car manufacturing city like Detroit, with lots of friends whose parents feared losing their jobs to the Japanese. Ling was a discovery, a potentially pivotal historical figure who was sort of hidden away. And though Anna May Wong was iconic, Asians are often lumped together.

Your book confronts that lumping together, and other stereotypes, with both jokes and chilling anecdotes.

I think I had for many years a kind of ambivalence about “Asian American” as a catchall. Where did that identity come from? Why did we all get lumped together in this way—Japanese, Filipino, Chinese, Korean? I think Asian American identity is important in a political sense. We can be one and be different. One thing I’m always interested in, in fiction, is this double consciousness.

Are Asian Americans angry about this? There isn’t a lot of evidence of that in, say, the mainstream press or on college campuses.

I do think there is anger. If you look online, Asian writers have a presence on Twitter—the #OscarsSoWhite thing—and [there is] the common use of very clumsy Asian stereotype jokes. Look at Calvin Trillin, who sees Asians only through their cuisine. It’s funny when you think about Chris Rock or Trillin—both have long, smart histories and awareness of race in the United States. But there’s an odd blind spot about Asians. There’s the model minority stereotype, which may seem positive. But the difficulty is that if we accede to one stereotype, even a benign one, it means all the others are true. We can occasionally be relaxed about stereotyping, but there’s an underlying anger, which reverberates for every minority group. Writing the book was a way of saying, here are some of the costs and penalties Asians have experienced, and any stereotyping of race reverberates. This kind of joking, an almost socially acceptable stereotyping against Asian Americans, is the tip of the iceberg.

How did you become fascinated by the role of Chinese labor in building the railroad?

There is some uncertainty about how many Chinese died in the building of the railroad; the upper limit cited is a kind of newspaper account of a railroad car carrying the bones of Chinese back down the mountain, a train car full of thousands of skeletons, though that’s not corroborated. But when I have traveled by train and driven the route of the Transcontinental over the Sierras, I’ve thought about how Chinese labor helped build this railroad. I visited the old tunnels the Chinese dug out. It was an amazing civil engineering feat and a physical feat of bravery. But with the exception of a few railroad aficionados, people don’t think of the role of the Chinese, or how the Irish built the Union Pacific, which was a literal act of nation-building, a railroad line from East to West. And the people who did it were immigrants.

What is happening with Chinese American identity in a racially fraught America?

Assimilation, which interests me overall, is a particular burden of the Asian American community. In some sense, it feels that the very hyphen is a kind of duality, a kind of choice: are you Asian or are you American? What’s difficult is that it feels like a no-win choice. If you assimilate more, that can seem like a repudiation of your Asian roots or heritage. But if you lean more toward that heritage, there’s a price. I’ve been presented with that choice. But what if it’s not either/or, but neither, or both? I don’t have to choose.

Peter Ho Davies (GRS’94), this year’s Ha Jin Visiting Lecturer, will read from The Fortunes tonight, Thursday, March 16, at the Florence and Chafetz Hillel House, 213 Bay State Road, fourth floor, at 6:30 p.m. The event is free and open to the public and will be followed by a question-and-answer session and book signing. Guests are recommended to arrive early to be sure of a seat.