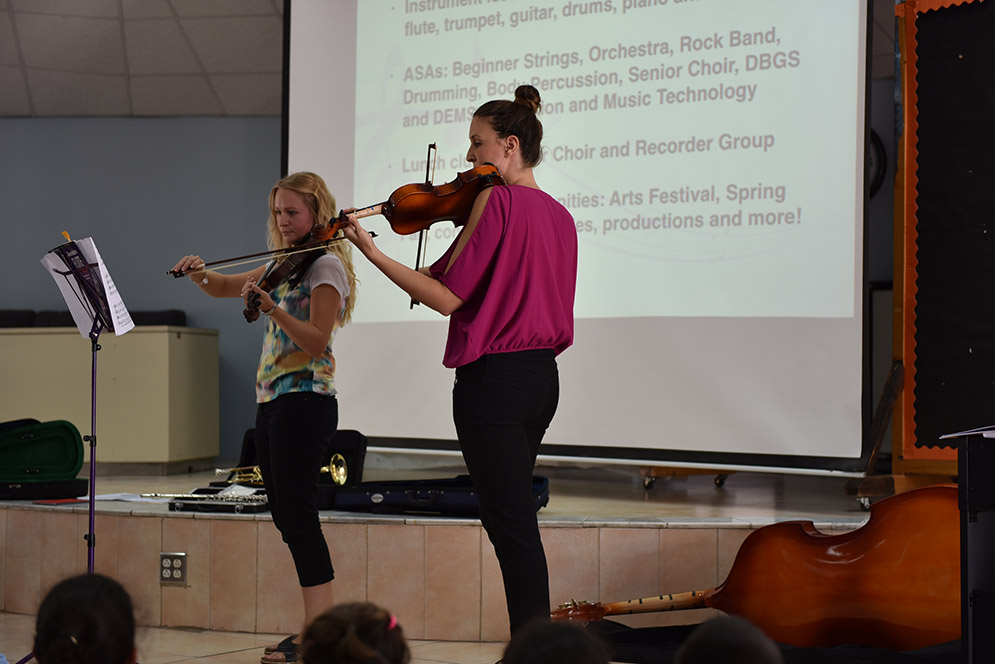 Hannah Lawson (CFA’17) and her husband occasionally miss life in the United States, but her teaching experience in Saudi Arabia is unlike any other she’d find in the world, she says.

During the summer months, BU Today is revisiting some of the past year’s favorite stories. This week, we feature music.

In 2014, violinist Hannah Lawson accompanied her husband to the Eastern Province of Saudi Arabia looking for adventure—and became her community’s go-to source for arts, culture, and after-school entertainment. Private lessons for eager expatriate students led to a job opening at an international school, where most of the students are foreign nationals living in company compounds. There, Lawson created the region’s first school string orchestra.

“About half of our students grew up here or were born here, and their education consisted of only general music, so they’re coming to the orchestra with no biases, no gender standards—the girls are playing double bass,” says Lawson (CFA’17), who was earning her master’s in music education through CFA’s online program. “As soon as the school year starts, I play the Jaws theme for them, and you can see their eyes open up. They’re so excited about something new.”

Lawson describes herself and her husband, Ian Celing, as “typical Midwestern” types who initially accepted Celing’s job offer with an oil company in Saudi Arabia so they could travel and pay off their student loans (the country has no expatriate income tax). They moved to Ras Tanura, a compound for foreign employees on the Persian Gulf. Lawson hadn’t anticipated how much free time she would have, and how few opportunities existed to fill it.

“We don’t have bars and movie theaters here, and it’s hard for people to communicate between compounds—it’s a lot of word of mouth, kind of like before the age of the internet,” she says. The region’s extreme heat—not to mention the need to wear an abaya for trips outside her compound—made finding new activities, or exploring the nearby cities, a challenge.

The only violinist for miles, Lawson began giving private string lessons within her compound and searched online for jobs. She found an opening at the Dhahran British Grammar School, an hour from her compound. The job interview marked the first time she’d left the house without her husband—women typically only travel with male family members—and she had to take a taxi for the trip, since women aren’t permitted to hold driver’s licenses.

“Outside there was this huge, gloomy-looking gate, and then you enter and it’s this gorgeous green lush land,” Lawson says. “When they asked about my background during the interview, I said that I was an orchestra director, and they said, ‘That’s wonderful! We’ve always wanted one of those.’”

“When they asked about my background during the interview, I said that I was an orchestra director, and they said, ‘That’s wonderful! We’ve always wanted one of those.’”—Hannah Lawson (CFA’17)

Lawson quickly found that the school’s needs dovetailed with her master’s work: she was afforded near-total freedom to create a curriculum for nearly 800 students ages 3 to 17, with the stipulation that it had to be structured so another instructor could come in and continue the work when Lawson eventually leaves the country. The students, who come from 43 countries, were lured by her violin renditions of pop tunes, and signed on enthusiastically. There was one potential setback: the school didn’t have adequate instruments for a string orchestra. 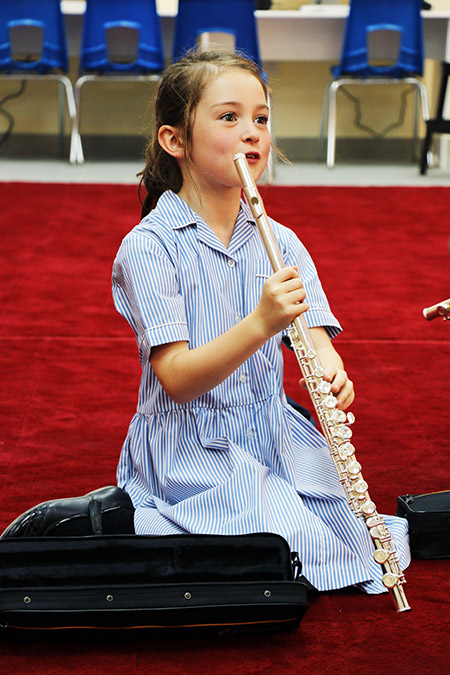 Lawson’s private students had been purchasing instruments online, but that wasn’t practical for an order of 20 violins, 15 violas, and 4 cellos. Lawson and her colleagues discovered that the three local music shops were owned by the same person, so she contacted him and explained her predicament. “He was so excited to help us,” she says, and promptly connected her with a retailer in the United Kingdom. The items took five months to arrive, but now the school has everything it needs, including backup instruments and extra strings.

The experience with the shop owner is emblematic of Lawson’s life in Saudi Arabia: “a completely wonderful, polite, and friendly experience,” she says.

Lawson’s husband is on a month-to-month contract, so they are free to return to the United States any time. They’re in no hurry. Lawson’s students are busy with composing in the computer lab and after-school body percussion clubs, among many other activities. The school held its first all campus arts festival in November 2016, and held the first all-school performance, which included the string orchestra, in December 2016, where the students performed an arrangement of a Coca-Cola holiday advertisement.

And while Lawson and Celing occasionally miss life in the United States—“sometimes I just want to go to Target by myself, and wear a tank top”—she says her teaching experience in Saudi Arabia is unlike any other she’d find in the world. “We’re in this small school in the Middle East, and have one of the coolest programs around.”