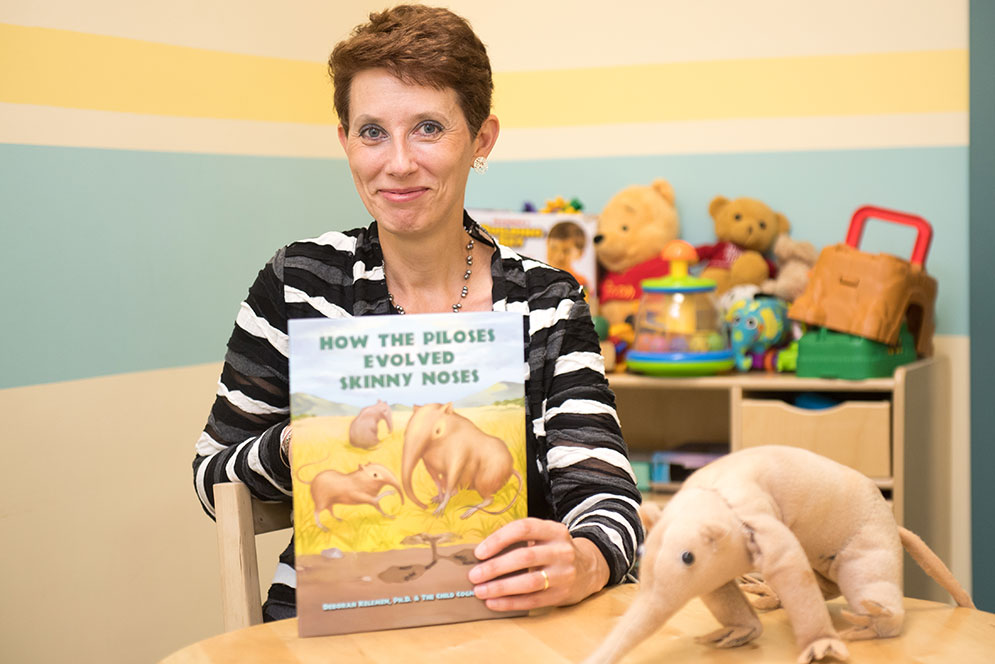 Deborah Kelemen, a BU College of Arts & Sciences professor of psychological and brain sciences, and her research team have published a children’s picture book that introduces the concept of adaptation by natural selection to kids ages five to eight. Photo by Cydney Scott

Conventional wisdom holds that natural selection is too complex for young children to grasp and so should not be taught until middle and high school. The problem with that wisdom, as Deborah Kelemen’s research has shown, is that by middle school, kids’ intuitive biases have taken hold, making it even harder for them to understand the concept. So Kelemen, a Boston University College of Arts & Sciences professor of psychological and brain sciences, and her research team wrote their own research-based book about natural selection, How the Piloses Evolved Skinny Noses, and aimed it at children ages five to eight. Then, with funding from the National Science Foundation (NSF), Kelemen tested the children, who listened to the book about the fictional anteater-like piloses and found that they got it.

“Kids are smarter than we give them credit for,” says Kelemen, who directs BU’s Child Cognition Lab and studies child development.

Tumblehome Learning, Inc., a Boston-based publisher of children’s science and engineering books, published How the Piloses Evolved Skinny Noses in June 2017, with glowing blurbs from Steven Pinker, a Harvard University psychology professor, and Alison Gopnik, a psychologist at the University of California, Berkeley, both experts on the study of children’s learning. 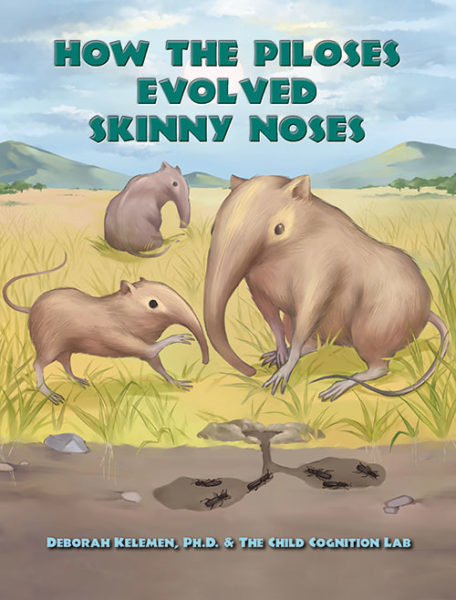 On September 18, 2017, Kelemen and her team kicked off a three-week-long, BU-sponsored crowdfunding effort to get the book, which costs $17.95 at Tumblehome, into the hands of teachers and kids across the US who might not otherwise be able to afford it. They set their initial fundraising goal at $2,500, but with close to $2,000 in donations pouring in before the official launch, they have already doubled their goal, to $5,000, and are fast approaching it.

Kelemen says she views her book as a tool in her mission to improve science literacy in the US and abroad. “This anti-intellectual stance that’s happening in this country and across the world is a serious threat,” she says. “People are trying to invalidate scientific evidence by the loudness with which they shout. If you want to fight back, and spread scientific literacy, buy this book.”

How The Piloses Evolved Skinny Noses

Listen to Kelemen read a passage from her recently released children’s book.

BU Research sat down with Kelemen recently to talk with her about how she and her research team came to write their first children’s book, why she thinks kids should be introduced to natural selection at an early age, and why she told the illustrator not to make the piloses human-like.

BU Research: Why did you and your team write How the Piloses Evolved Skinny Noses?

It’s about a fictional animal called the piloses whose environment changes. They eat millibugs, which keep them healthy and strong, but as the climate gets hotter, their food goes underground and the piloses species goes from having mostly wider trunks to mostly thinner trunks because the ones with thinner trunks can reach the food and are healthy enough to have many babies. Kids naturally learn the logic of adaptation by natural selection through the story. It unfolds logically, step by step.

You’ve said that you’re frustrated with a lot of the regular children’s science books that are out there—that they’re too flashy and interfere with actual learning.

We know, based on research, that all those bells and whistles are a distraction. It gets adults very fired up. Children like looking at them, but they don’t actually learn from them. If you want to create learning material, which our book is, you can’t go with the bells and whistles. The whole notion is you’re going to sit down and read the book with a child. Children like that. We always read the book to the kids when we were testing it.

Why did you insist that the publisher not alter the story in any way and that the illustrator, Chen-Hui Chang, who redid your lab’s original drawings, not make the animals too cuddly—and that they couldn’t be human-like?

Why are you so concerned about teaching young kids about natural selection and not waiting until they’re 13 to 18 years old?

This is such a counterintuitive idea and 13 to 18 is too late. By elementary school, children are cementing their own intuitions that are the roots of scientific misconceptions seen in high school kids and undergraduates. You need to plant the seed early. This is not the full explanation of natural selection, but it is something that does counteract the natural way kids explain animals’ body parts—that animals grow what they need, that everything transforms so that it gets what it needs. That’s not how it works. Populations change over time. It’s a gradual process. In subsequent books in our series, we will show how the same gradual process in Piloses can lead to even bigger evolutionary changes, like new species.

You didn’t have books like this when you were a kid, but you learned natural selection.

Why is this crowdfunding campaign so important to you?