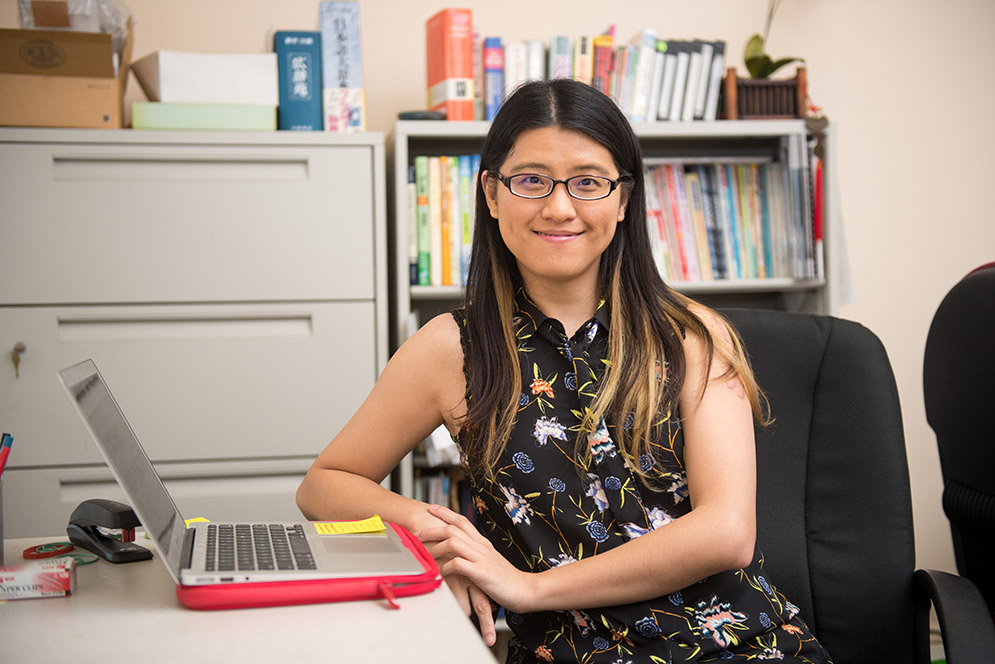 Amber Navarre is this year’s winner of the CAS Gerald and Deanne Gitner Family Award for Innovation in Teaching with Technology. Photo by Cydney Scott

“You look at the previous winners and they are developing whole databases or something big,” says Navarre, a College of Arts & Sciences senior lecturer in Chinese. “I don’t program. I just use technology from a layman’s perspective. The tools are easy to use—YouTube, Google Docs.”

The Gitner award, which comes with a $10,000 prize, is conferred by the Office of the Provost and the Center for Teaching & Learning, which named Navarre this year’s winner for her innovative use of that technology.

For her first- and second-year classes, Navarre implemented a flipped model—i.e., much of the teaching and practice of grammar and vocabulary is done online rather than during class time. She uses online videos for the more rote parts of the learning process. Her approach “has freed up valuable class time for the more meaningful communicative projects that are so crucial to language learning,” wrote Gisela Hoecherl-Alden, a CAS assistant dean, director of language instruction, and a professor of the practice in German, and J. Keith Vincent, a CAS associate professor of Japanese and comparative literatures and chair of the world languages and literatures department, in their letter nominating her for the award.

“She really modernized our Chinese program, making it kind of a model program,” Hoecherl-Alden says.

“She takes all the repetitive practice that you need to get started in a language, to build a foundation, and puts that online,” says Christopher Healy (CFA’17), who has taken three classes with Navarre. Through recordings, “she can still hear what you were saying and grade you and give feedback. But she saves class time for more interactive, general teaching—helping you get stuff.”

Chinese is one of the most difficult languages to learn, Navarre says, requiring 2,200 to 2,400 hours of study and practice for students to achieve a functional proficiency. “If they just limit their exposure to within the classroom, there is no way they can reach that,” she says. “We need to expand their experience outside the classroom, but how do we do that? We can’t meet with our students 24 hours a day.”

The way she does it, it’s like there’s no division between her use of technology and her teaching, it’s all one thing. – Christopher Healy (CFA’17)

Navarre joined the faculty in 2013 and started out using instructional videos she had previously developed for the Lantern Institute, a self-paced Chinese learning website she founded in 2011. In 2015 she created a YouTube channel with additional videos that addressed more complex grammar questions.

“Everything is clear and so well integrated with her day-to-day lectures and class schedules,” Healy says. “The way she does it, it’s like there’s no division between her use of technology and her teaching—it’s all one thing.”

Navarre’s third and fourth year students are directed to other media sources. For example, before each session of one class, students are required to read a chapter of a novel and watch an episode of the Chinese television series based on it. Then she leads a brief class discussion to make sure everyone has understood what they’ve read and seen before they break into small groups for discussion of cultural matters, from government corruption to extramarital affairs.

Poneman says that in his fourth-year class “we were able to have some interesting cross-cultural discussions. She would not just integrate the subjects with the Chinese context of the shows, but contrast it with how things are in America. She’s pretty great.”

In addition to intro classes of students learning Chinese for the first time, Navarre’s advanced classes may include both heritage speakers (those who grew up in the United States and learned Chinese from their family) and native speakers.

Navarre grew up in Taiwan and came to the United States in 2003 for graduate school at Pennsylvania State University, earning a master’s degree in teaching English as a second language (ESL) and a PhD in applied linguistics. She taught there and at the University of Colorado Boulder before coming to BU.

Her interest in instructional technology started when she was a doctoral candidate and teaching ESL classes. “I am always fascinated with technology. I like to play with new things,” she says. “I keep finding new things—easier tools, actually—for my teaching.”

Navarre is collaborating with the Geddes Language Center and Distance Education to train full- and part-time faculty in teaching with technology and is working with Liling Huang, a CAS lecturer in Chinese, to develop a Chinese language course that will be taught exclusively online and will launch this summer. She is also developing, with Jungsoo Kim, a CAS lecturer in Korean and head of the Korean language program, two training programs, one for K-12 Chinese teachers and one for K-12 Korean teachers, funded by two grants from STARTALK, a program funded by the National Security Agency.

In addition to those projects, Navarre is finishing a book, Technology-Enhanced Teaching and Learning of Chinese as a Foreign Language, scheduled to be published sometime next year.

“Language teachers teach language, we don’t teach technology,” she says. “So we should use free technology and easy technology. We don’t have to be computer geeks, but we can embrace what technology brings us.”

There are 2 comments on Teaching Chinese with Everyday Technology