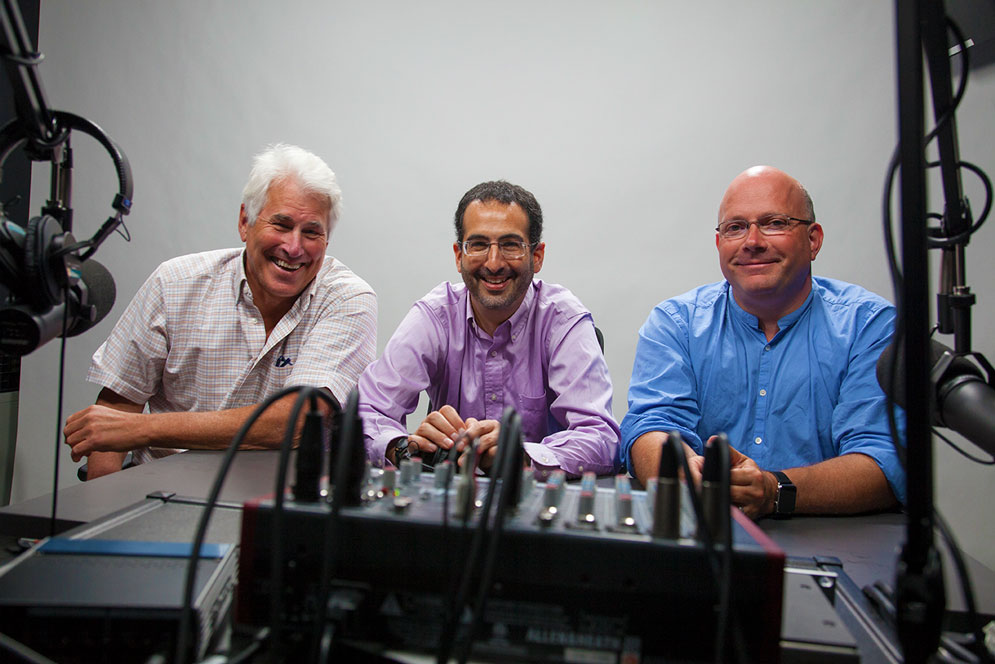 One study says coffee will extend your life. The next one says it will kill you.

Or it’s red wine. Or bacon. Or whatever.

“Last week they said this, this week they’re saying that, and as a consumer that’s really hard to wade through and figure out what is real and what is not,” says Donald Thea, a School of Public Health professor of global health, one of three voices on the new Free Associations podcast, which looks at the validity of the research behind the most recent health claims.

The podcast, a fast, funny and well-informed conversation among health experts, launches tomorrow. It’s produced by the Population Health Exchange (PHX), SPH’s new resource hub and continuing education initiative focused on public health. The podcast hopes to help listeners sort through competing claims and look beyond those DRAMATIC HEADLINES! to the actual medical research behind them. The first two episodes will be available for download Tuesday, and new episodes will be released every other week thereafter.

Listen to a sample of their conversation about an infamous claim that the measles/mumps/rubella vaccine causes autism:

“The three of us are deeply cynical iconoclasts,” says Thea, who cohosts with Matthew Fox (SPH’02,’07), an SPH professor of epidemiology and global health, and Christopher Gill, an SPH associate professor of global health. “We very much like to question authority.”

But they do it with science. They take apart and examine the scientific method behind publication studies, looking for biases and errors. They also compare what the results actually say to what can be reported via sound bites on the evening news.

“What we are doing is pulling back the curtain on how you make the sausage and showing that maybe the conclusions that are being sold as true aren’t, because they got it wrong,” says Thea, who is also director of BU’s Center for Global Health and Development.

What the media find interesting tends to quick fixes and studies that in the long run may not be borne out, they say. Among the subjects in the first six episodes are a report that moderate wine drinking is good for your health, and one on the relationship between chocolate consumption and atrial fibrillation. Each 45-minute episode includes shorter segments explaining study methods and terminology (e.g., selection bias or how peer review works) and offbeat health-related news. Regardless of the topic, fans of National Public Radio shows like Car Talk or Wait, Wait…Don’t Tell Me will feel right at home with their sardonic banter.

All three hosts attend what are called journal club gatherings at SPH, where staff and students get together informally to hash over notable articles in recent medical journals. Who suggested turning those conversations into a podcast? “It was Matt’s idea,” the others say in unison, as Fox nods in mock contrition. A fan of the NPR podcast Pop Culture Happy Hour, Fox pitched the idea to Leslie Tellalian, SPH director of lifelong learning and prime mover behind PHX.

She said yes. The three speak to a very broad audience, from public health students and professionals to the general public, Tellalian says, and she hopes they’ll attract listeners to PHX’s other offerings. “I think they’re really good people to open doors for us,” she says. “Understanding what they do and how they do it helps people understand what public health is and the role it plays and the importance of it.”

In addition to being friends, the podcast hosts have each taken a turn teaching the course Skills in Critical Analysis and Evidence-Based Writing for Public Health Professionals. They’ve taught students how to analyze a journal article, find its strengths and weaknesses, and come up with conclusions about its value.

“The students love it when we tear down these icons of authority, like the New England Journal of Medicine or The Lancet, and say, ‘That article’s a piece of crap,’” Thea says.

“We all do this research too, so we’re pretty familiar with the ways that we’ve gotten it wrong,” says Fox. “We just thought it would be fun to get together and do something that was topical and use those critical thinking skills.”

Such critiques are not just intellectual exercises. There were localized outbreaks of measles after the MMR-causes-autism study, and more recently, the Zika virus outbreak led to several irresponsible theories likely to cause more harm than good, according to Thea.

“There is this belief that anything that is published is true,” says Gill. “That is not the case.”

Free Associations seems especially timely in the age of fake news, phony internet experts, and a president who claims that global warming is a Chinese hoax. The hosts say it’s frightening the way basic science is being called into question, often for political reasons.

“What’s going on at the EPA has been another thing that’s motivated some of this,” Fox says. “Seeing the way they are going off a complete lack of science in making these policy decisions just made me more interested in what the science actually says.” The three profs are not trying to sow doubt in the scientific process by debunking some reports, he says, but are saying that challenging the results is part of the process.

“The real issue is that the scientific process is a lot messier and less definitive than is popularly believed,” says Gill. “It’s much more incremental, it lurches back and forth before taking paradigm shifts and exposing new truths.”

PHX Free Associations Podcast Launch and Listen Party, featuring the live recording of an episode, is Tuesday, September 12, from 5:30 to 7:30 p.m., in the Hiebert Lounge, 72 E. Concord St., on the Medical Campus. It is open to all, and there will be refreshments and prizes. RSVP here.