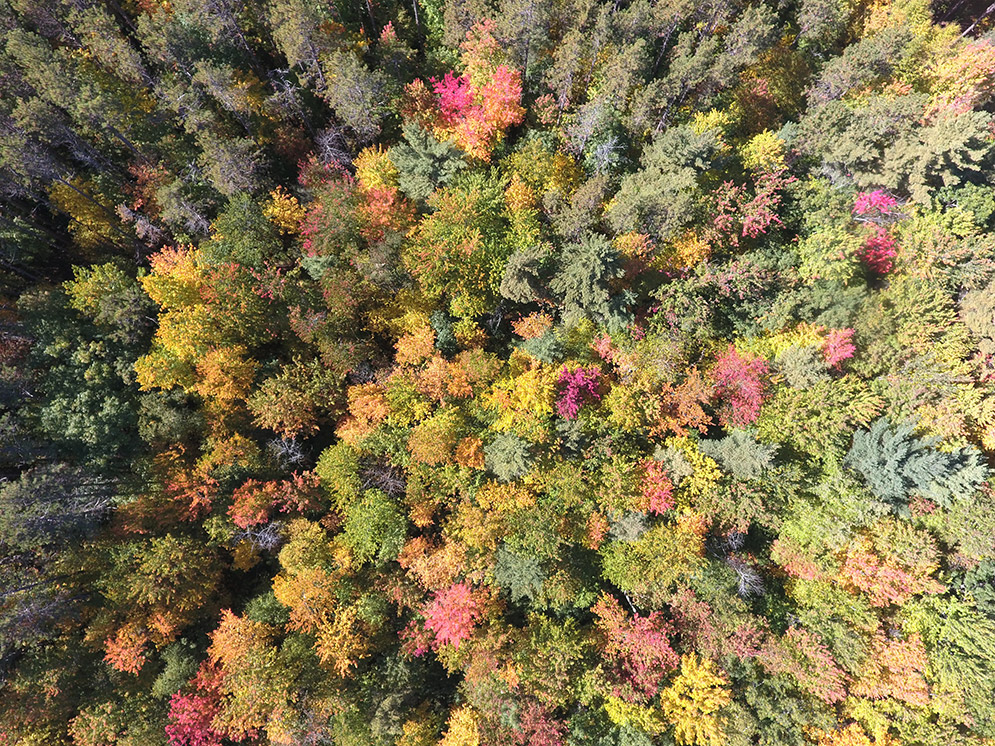 Harvard Forest in Petersham, Mass., is a more than 3,700-acre ecological research area where scientists have been carrying out experiments since 1907. Photo by Mark Friedl and Minkyu Moon

For most of us in the Northeast, the first few green leaves every spring are a welcome sign that the long, cold winter is finally coming to an end, and sweaters and boots will soon give way to shorts and flip-flops. For researchers at Boston University, however, these leaves may also be a key to understanding how our global climate is changing. Their research, which combines satellite data with on-the-ground measurements, suggests that as global temperatures rise, spring in the Northeastern United States is starting earlier. This shift has major implications for how carbon, a main player in global climate change, cycles through the ecosystem.

Professor of Earth & Environment Mark Friedl and doctoral candidate Minkyu Moon (GRS’24) used satellite imagery to determine that over the past few decades, trees in Harvard Forest, a more than 3,700-acre experimental forest located in Petersham, Mass., have been sprouting leaves earlier in the spring. The pair, whose work is funded by NASA’s Terrestrial Ecology Program, also analyzed on-the-ground data of carbon uptake and found that the date when the forest starts taking up more carbon—an indicator that trees are photosynthesizing—has also shifted earlier, and to an even greater degree. Moon presented their preliminary results at the American Geophysical Union Fall Meeting in New Orleans on December 13, 2017.

There is no question that over the past century, humans have been churning out more and more carbon-laden emissions from fossil fuels. However, what happens to those fossil fuel emissions once they leave our cars, homes, or factories is a bit more complicated. “Only about half of what we’re pumping into the atmosphere is staying in the atmosphere,” Friedl explains. “The other half is being absorbed by the planet,” a burden that is split between the ocean and terrestrial ecosystems, namely forests. But how much carbon forests are taking up, and how much they will take up in the future, is an open question that relates to forest productivity, specifically how much trees are photosynthesizing and for how long.

“That’s kind of the prime motivation for doing this, is trying to help us to understand how ecosystems are changing, and if the climate continues to warm, what that will do to the growing season of ecosystems, and how changes in the growing season will lead to increases or decreases in carbon sequestration, and then, by extension, how that will impact the long-term balance of carbon dioxide in the atmosphere,” Friedl says.

To investigate the timing of spring in Harvard Forest, the researchers compared NASA satellite imagery from two sources: The MODIS satellite, which has been orbiting the globe daily since the early 2000s, capturing coarse resolution images; and the Landsat satellite, which has been orbiting for 30 years, but revisits each location on the Earth less frequently (once every eight days), gathering high resolution images.

“The imaging sensors on the satellites are designed to capture the properties of vegetation,” Friedl explains, adding that the images are collected at wavelengths outside the visible spectrum that are particularly sensitive to the presence of plants that are actively photosynthesizing, so when leaves emerge in the spring, “we can see that timing quite clearly from the satellites.”

Friedl and Moon paired their satellite data with another unique data set: three decades of on-the-ground measurements of carbon uptake from an eddy flux tower in Harvard Forest, which they used to pinpoint the timing of increased carbon uptake that occurs every spring when trees begin photosynthesizing again.

“We’re exploiting the fact that we’ve got in our backyard at Harvard Forest the longest continuously running carbon exchange measurement site on the planet, which has instruments that measure the uptake and release of a variety of trace gases including carbon dioxide from ecosystems,” Friedl says. “So it’s literally measuring how the ecosystem breathes.”

Their Landsat satellite data suggests that, over time, leaf emergence in Harvard Forest has indeed shifted earlier (though they did not see a shift in the MODIS observations, which may have to do with the shorter time frame and coarser resolution), and their on-the-ground measurements tell a similar story: over the past few decades, the annual increase in carbon uptake has been occurring earlier in the spring. However, this trend towards earlier spring was more pronounced in the on-the-ground measurements than it was in the satellite data, a difference the team will investigate in follow-up studies. The team would also like to explore how a longer growing season affects overall carbon uptake of Harvard Forest, and expand their experimental approach to more sites.

Joshua Gray, a remote sensing scientist at North Carolina State University, calls the research “the whole soup to nuts package” for the way it extends further back in time and uses higher resolution images than previous satellite work, while also incorporating on-the-ground observations. Gray considers the research an important step towards understanding the complex relationship between climate change, the timing of spring, and carbon cycling.

“We need to understand how climate drives the timing of [spring], and then how the [timing of spring] affects the carbon uptake, so ultimately we can say how climate change will affect the carbon uptake in these forests,” he says, explaining that while it makes sense that a longer growing season would cause forests to take up more carbon, there are many other factors involved, so this may not necessarily be the case.

Trevor Keenan, an ecosystem scientist at Lawrence Berkeley National Laboratory, thinks the research is important not only because it establishes a multi-decade trend of earlier springs in Harvard Forest, but also because it provides a concrete example of how climate change is already affecting ecosystems.

“Effectively, we’re changing the climate and ecosystems are responding, and we can observe that change from the ground and from space,” he says. “We can actually see things change like never before in human history. It’s quite striking as an indicator of the effects of climate change.”

Ultimately, the researchers plan on using their data to improve how climate models represent the timing of spring, which Friedl hopes will lead to better predictions of future climate change: “We’re trying to use this information to unravel this pretty complicated set of questions surrounding how the planet is changing and what the future holds in terms of ecosystems and ecosystem impacts on the climate system.”