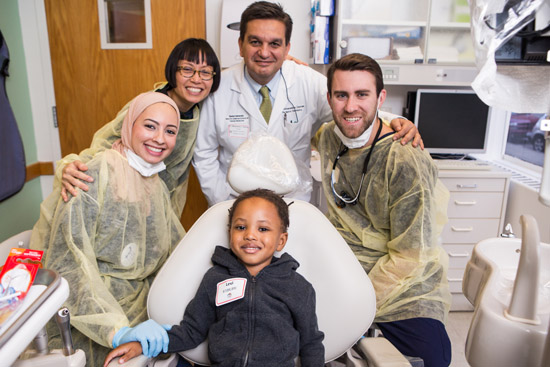 The seven-year-old boy had never seen a dentist.

Born with undiagnosed HIV transmission from his mother, his first two years were plagued by mysterious infections and the frightening condition known as “failure to thrive.” When he was finally diagnosed, it took years to stabilize his condition and reduce his viral load. Eventually a nurse practitioner at Boston Medical Center (BMC) called the new Henry M. Goldman School of Dental Medicine Pediatric Oral Healthcare Center and asked staff there to see what they could do for the boy’s many cavities and other oral health problems.

“It was a challenge, because of the medically complex history of the case, and it was socially complex as well,” says center director Dolrudee “Porsche” Jumlongras, an SDM clinical assistant professor. “A single mother juggling work and parenting. The patient himself is slightly developmentally delayed, so he doesn’t want to sit and be treated. And he has to come here for so many visits.”

First Jumlongras assigned a resident to take pictures and measurements and assemble a case history. They did research on the latest literature on HIV and pediatric oral health. Then they convened a team that included a nurse practitioner and a pediatrician to “figure out the best way to clear him of cavities and start good oral health with education,” she says, “while being sensitive to the family situation—how many times will mom have to miss work, and how many times will he have to miss school?”

Now, after many clinic visits for evaluation, the boy is scheduled to have a comprehensive dental treatment done under general anesthesia this month at Franciscan Hospital for Children. After that, he will have a routine checkup every three months at the clinic.

“We have a definitive oral health care plan for him, and most important, he now has a dental home, which he’s never had before,” says Jumlongras. “He’s definitely on the road to a brighter future. We will take very good care of him.”

The center, which opened last September, has served about 400 patients, many of them residents of nearby neighborhoods and 98 percent of them covered by Medicaid. Many are from underserved minorities. Some are recent immigrants from places as distant as Somalia and Ethiopia. Few of them would be able to find or afford state-of-the-art care on their own.

“While this country has done a great job increasing access to care over the last 20 years, there are still children that wake up every day with a toothache,” says Athanasios Zavras, an SDM professor and chair of pediatric dentistry. “The dean and the school and the University wanted us to do something about it.”

The pediatric dentistry department already operated three neighborhood clinics—at East Boston Neighborhood Health Center, at Franciscan Children’s Hospital, and at nearby Boston Medical Center—but had no dedicated pediatric clinic at the school itself.

“Our clinic at BMC has a four-month wait time,” says Zavras. “It made sense to increase the capacity to serve children. And we were fortunate enough to have an administration here that gave us the space, the resources, and the financial support we need to thrive.”

At the same time, the federal Health Resources and Services Administration issued a call for proposals for new approaches to meeting the dental needs of people who are poor, have disabilities, or are from underrepresented minorities. The SDM team won a $2.8 million, five-year grant to create team-based care delivery on site.

The result is a small, but bright and busy clinic in a corner of the school’s building at 100 E. Newton Street, complete with three dentist’s chairs.

“I haven’t taken my children to the dentist for years,” says Sofia Cespedes of Dorchester, who had been using a holistic approach to dental health. When she brought her 4- and 6-year-old sons and 12-year-old daughter to BMC for traditional checkups, she found that no appointments were available. Staff there directed her to the new center, where the children got cleanings and checkups and some minor repair work. It was the first time in the chair for her younger two. “It wasn’t too pleasant for them,” she says. “But the doctors were pretty nice, and they seem to know how to handle children pretty well.”

“This is what I love to do,” said Jumlongras, who joined SDM last summer. She oversees a staff of about 10, including 2 residents (dentists becoming pediatric specialists) and 4 predoctoral students (becoming dentists) as well as support personnel. “It’s just a perfect opportunity for building something new from scratch, and a wonderful thing for the population. It’s awesome for training, too, because of the variety of patients we have.”

Most patients are from the community, although the clinic also treats children of BU and BMC employees. Language and cultural differences and neglected dental hygiene mean that many of the cases can be difficult. Jumlongras and her staff also seek out difficult cases from other medical centers, taking on cases where children have suffered trauma to the mouth, usually accidental. They welcome patients with special factors such as HIV, autism, and neurological conditions.

To treat those complications, the center works with grad students and specialists from the School of Medicine, BMC, Sargent College of Health & Rehabilitation Sciences, the School of Social Work, and others: speech pathologists, social workers, nutritionists, pediatricians, a nurse practitioner, an occupational specialist, and translators.

“The mouth is more than just decayed teeth,” says Zavras. “It’s about what you eat, how you breathe, how you speak, how you laugh, how you sleep, if you snore at night, how you look, how the kids grow and develop over the years.”

The clinic has technology that’s not often available in private practices, such as a laser tool for soft-tissue surgery and advanced imaging equipment like an acoustic rhinometer, which uses soundwaves to map nasal airflow and airways. For even more complex cases, they can take advantage of BMC facilities, including operating rooms with general anesthesia.

A key part of the clinic for many families is the playroom, which has a bookshelf, puzzles, and toys. It helps reluctant patients relax and makes things easier, especially for parents bringing several children to the clinic.

“When I first got this position, the playroom didn’t exist,” Jumlongras says. “Thanos [Zavras] walked me through—‘Here’s your office, here’s the clinic.’ And I said, ‘Where’s the playroom?’ So the space that was supposed to be my office is the playroom.” She laughs. “I will give up my office anytime for a playroom. It’s important. When kids are happy, parents are happy.”